Deloitte partners with Belgian hockey has been saved

Deloitte partners with Belgian hockey has been removed

From June 1, and for at least three years, Deloitte Belgium will be the proud partner of the Royal Belgian Hockey Association. In addition, the partnership will also be extended to the Top Hockey League, the Belgian honor divisions competition and the FIH pro League.

Professionalism, team spirit, integrity and excellence are values that the Belgian Hockey Association and Deloitte share. The Belgian Hockey Association propagates these values in working with the national teams and in the services it provides to the hockey clubs in Belgium. Deloitte refers to them as 'showing the way' : meeting clients’ challenges to succeed today and in the future; conducting business with integrity, honesty and professionalism; taking care of each other; promoting inclusion to stimulate diversity and collaborating with measurable impact.

The two organizations have a lot more in common. Deloitte believes in sports for the physical health and the mental well-being of its employees as well as for the team cohesion and the sense of community. As an organisation Deloitte gives its employees the opportunity and flexibility to develop their talents. Testimony to this is that Deloitte employs two professional hockey players who combined their professional sports career with a job.

Deloitte already sponsors thirteen Belgian hockey clubs and launched the Deloitte Hockey School a few years ago to encourage young talent. In addition, many employees actively support and practice the hockey sport. So one can speak of a "natural fit" !

“We are delighted to enter into this 3-year partnership with the Belgian Hockey Federation. Deloitte has long been at the forefront of supporting sports. We strongly believe in the importance of sports for the physical and mental well-being of our employees as well as for team cohesion. We have many values in common with hockey. The hockey values of respect, fair play, tolerance, inclusion and team spirit are also at the heart of our DNA. It is a sport that is equally practiced by men and women on both sides of the linguistic border. As an organisation, we strongly believe in the power of diversity, gender equality and in the creation of equal opportunities for all our employees” said Piet Vandendriessche, CEO of Deloitte Belgium.

Serge Pilet, CEO of the KBHB, is delighted with this new partnership with Deloitte: “We count on the proven drive and decisiveness of our new partner to help Belgian hockey, its national teams, clubs, referees, infrastructure to reach an even higher level.”

“We are proud to be able to support hockey in Belgium. We not only believe in and support the Red Lions and Red Panthers, we have also decided to go beyond the national teams and the national league and support promising talent. Supporting hockey is a natural choice for us, as we have a large community of players and fans amongst our employees, including professional players. We already support many hockey clubs through our employees and with the Deloitte Hockey School, we nurture young talent, ”said Joël Brehmen, Sponsoring Partner at Deloitte Belgium.

During the press conference that took place in the Deloitte offices at Brussels Airport, the match outfit of the national teams for the European Championship was revealed… with Deloitte on the sleeve, of course ! 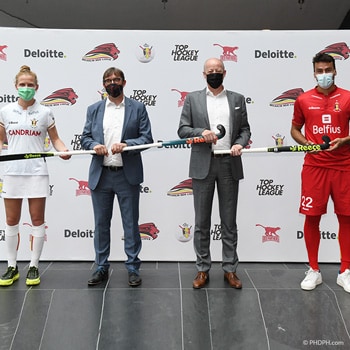 The selections for the upcoming European Championship were also presented during the press conference in the Deloitte building (4-13/06/2021). Raoul Ehren, national coach of the ladies, announced the Red Panthers that he is taking to Amstelveen, as well as the goals for his team. Shane McLeod did the same for the Red Lions.