Business structure in Brazil has been saved

Business structure in Brazil has been removed

An overview of the country based on institutional, economic performance and international credibility areas.

With the Atlantic Ocean to the east, Brazil has a 7.491 kilometer coastline. The country borders all the South American countries except for Ecuador and Chile.

Brazil is currently politically and administratively divided into 27 federative units, with 26 states and one federal district. The federative units are independent subnational entities (independent governing, legislative and tax entities) with own governments and constitutions that together form the Federative Republic of Brazil. The executive power is exercised by a governor elected every four years. The judiciary power is exercised by trial and appellate courts that handle general legal matters.

The municipalities are territorial units with legal identity and a certain level of administrative autonomy. They are the smallest independent units in the country. Each municipality has its own organic law that defines its political organization, which is however limited by the Federal Constitution. There are 5.565 municipalities throughout the national territory. The population in some municipalities is greater than that of several countries in the world (the city of São Paulo has close to 12.2 million inhabitants). Others have less than 1.000 inhabitants.

Brazil’s population is comprised of 210.147.125 inhabitants (IBGE Estimate - 2019). The country has been considerably urbanized (an increase of 23 million people living in urban centers). The population female is 51% and 49% are male. The administrative capital is Brasilia, and the official language is the Portuguese. The government system is the Presidentialism and the official currency is the Real (BRL).

The Brazilian ISO Code is BRA, and the country calling code is 55. The web country code is:.br; and the official website is www.brasil.gov.br. Brazil’s main financial center is the State of São Paulo. In 2018 the Brazilian Nominal GDP was US$ 1.757 trillion, a growth of 1.1% compared to 2017 . 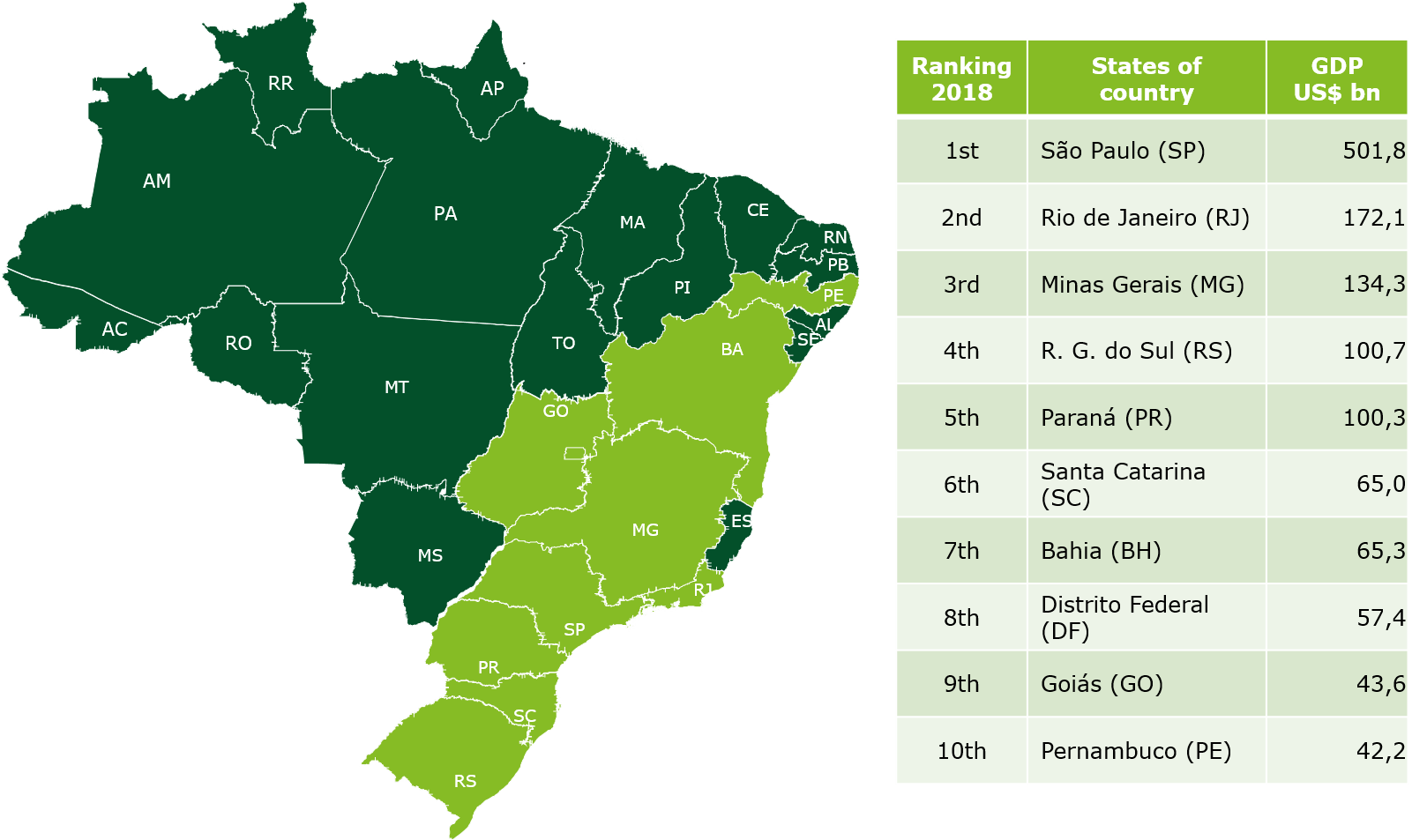 Since the 1990’s with the State Reform and the creation of Fiscal Responsibility Law, Brazil has been concentrating its efforts on improving the level of transparency and responsibility of government actions and the efficiency of regulations in order to make them clearer and more coherent. Such actions are considered essential for maintaining a healthy business environment, in addition to being part of the foundations of the Brazilian democratic regime.

To expand the control over government spending, detailed and updated information on bids, signed contracts, budget spending and fund transfers made by federative units is available for consultation through Web portals, such as the Transparency Portal (“Portal da Transparência”) (www.portaltransparencia.gov.br), whose efficiency was recognized by the United Nations (UN) in 2008. Today, it provides more than one billion pieces of information involving federal funding of more than R$21.5 trillion.

The www.comprasnet.gov.br portal is another example of online control offered to the society. It allows direct consultation of bid notices, auctions held, electronic quotations and management reports on the progress of purchases and savings obtained through eBidding. The system, created in 2002, is also a management tool: it is designed to reduce government-purchasing costs and combat fraud and over-invoicing.

Brazilian economy in the world

In 2018, the Brazilian Nominal GDP was US$1.757 trillion, a growth of 1.1% compared to 2017. These results compared to the other countries GDP’s lead Brazil to the 9th position in terms of global economy.

However, the IMF (International Monetary Fund) expect that as Brazil recover from this slowdown in its economy in the long term and reaches back the 5th global position between the main economies in 2050. 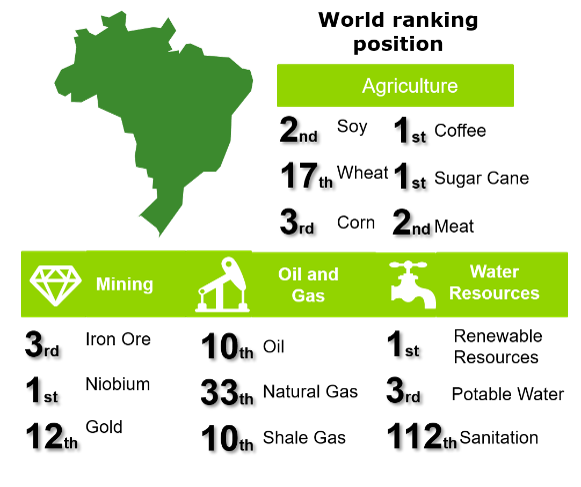 This IMF forecast of the Brazilian growth prospect, focus on the aspect that the country appears as one of the main agricultural producers and one of the main commodities exporters in the world. In the long term, if economic environment gets better retaking in addition to the structural reform agenda, the growth of the Brazilian economy may upwards the next years. The international authority estimates a growth of 0.9% in 2019 and 2,0% in 2020 for Brazil's Gross Domestic Product (GDP).

The success of the 1990’s economic reform and the realization of social policies in the 2000’s has attributed international credibility to the Brazilian economy. In April 2008, S&P upgraded Brazil from "speculative grade" to "investment grade" by increasing the BB+ rating to BBB-. In May 2008, Fitch also raised the country to the "investment grade" category. This decision was also followed by Moody's in September 2009, the last of the three major international agencies to award this "good payer seal" to Brazil. Currently, due to the high fiscal challenges, political uncertainty and weak perspective of economic growth, Brazil has been downgraded by the three agencies and their risk classification.

Despite the current low risk rating, the Ibovespa, the main index of the Brazilian stock exchange, reached in October 2019 the mark of 108 thousand points for the first time in history, with optimism supported by the positive outlook for the asset market over the next months.

This favorable market environment also reflects the lowest interest rate in history, the prospects for the economy to recover and the state's progressive exit the position of financing companies on economy.

For this reason, companies have been seeking more resources in the capital markets and investors have resorted to investments that can yield more than conservative assets. From 3th quarter 2019, R$ 335.1 billion were raised in all public offerings, of which R $ 57.6 billion in variable income, R $ 211.3 billion in fixed and hybrid income and R $ 66.2 billion in offers in the foreign market.

The previous record was 2017, when total funding from public offerings was R $ 324.3 billion.

Goldman Sachs Group economist Jim O’Neill coined the BRIC acronym with the initials of these four large emerging economies (Brazil, Russia, India and China) in 2001. South Africa joined the group in April 2011. With economic growth rates above the global average, the BRICS countries continue to be the main target for global investors looking to protect their assets in a scenario of instability in Europe and the U.S. These five countries account for close to 25% of the global economy.

Below is the share of the countries’ GDP in the BRICs: The deceleration of Latin American Real GDP in the last couple of years has a more cyclical nature than structural. Nevertheless, it was also affected by the recent slowdown in emerging countries. Notwithstanding, the region is resilient to possible recession in developed countries (double-dip recession), thanks to strong economic fundamentals and a more concise domestic demand, through access to credit and the expansion of the workforce. However, inflation begins to expand dramatically in Venezuela and Argentina.

In Brazil, inflation has decreased and already reached the values within the objective established by the government. Brazil is Latin America’s main market, representing almost 50% of the territory and 41.4% (EIU, 2018) of the economy. According to The Economist, the country's participation in the regional economy was expected to maintain its pace, or to reduce its share by 1-2%, mainly due to the Mexican and Colombian rise in the period, making Brazil fall from the previous 37% in 2018.

Below the share of the Latin American countries in the regional GDP: 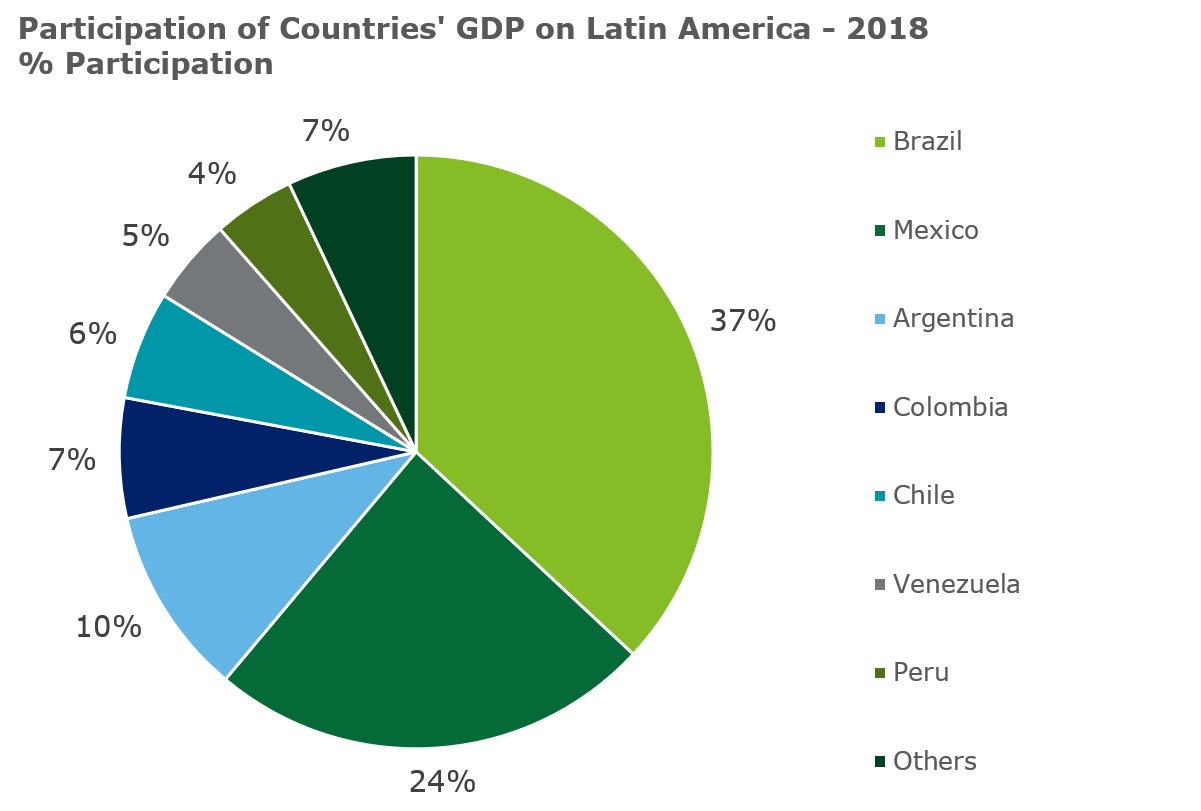 Key highlights of the country, from its history to business structure within a global perspective

A guide to help foreign investors