Regulatory Framework has been saved

Regulatory Framework has been removed

After over 40 years of monopoly in the exploration and production of oil and gas, Brazil offers now a hybrid regulatory system to address the specificities of the different risk/profitability profiles of exploratory areas.

After the creation of the state-owned company Petrobras in 1953, Brazil experienced over 40 years of monopoly in the exploration and production (E&P) of oil and gas (O&G). Afterwards, Brazil has faced important changes in its regulatory system over the past two decades.

The most notable one was the deregulation of the E&P sector in the 1990s under the Constitutional Amendment No. 9 of November 9, 1995 that broke up Petrobras’ monopoly, followed by the enactment of Law No. 9478 of August 6, 1997 also known as the Oil Law.

Later on, the discoveries in the pre-salt area starting in 2006 culminated in the establishment of a new regulatory framework in 2010, seeking to cope with the peculiarities and challenges of this new exploratory paradigm. In 2016, the Law 13.365 relaxed the E&P rules of the pre-salt, allowing Petrobras to have the right, but not the obligation to be the operator of all blocks in the area.

As a result, Brazil currently offers a hybrid regulatory system to address the specificities of the different risk/profitability profiles of the exploratory areas - comprising production sharing agreements (PSA) for pre-salt and strategic areas (low exploratory risks and high potential); the Transfer of Rights Agreement that covers seven blocks in the pre-salt area; and a concession-based model (tax/royalties) for the remaining areas. The continuous evolution and maturation of the country’s oil and gas regulatory system is a precondition for the country to benefit from its natural resources endowment.

Deregulation of the E&P sector

During the 1990’s, in line with the international trend, Brazil faced an important institutional transition, guided by the Master Plan of Reform of the State Apparatus, set up in 1995 as an attempt to redefine State's role through the privatization and to create new forms of State intervention.

Specifically in the O&G industry, the regulatory framework was dramatically changed by the Constitutional Amendment No. 9 of November 9,1995, which broke the Petrobras monopoly. Later, the Law 9478 of August 6, 1997, laid the foundations for the new regulatory framework. With the aim at drawing up the new institutional design, the National Energy Policy Council (CNPE) and the National Agency for Petroleum, Natural Gas and Biofuels (ANP) were created. The CNPE works as the President’s advisory body on energy policy. The ANP is a federal regulatory agency linked to the Ministry of Mines and Energy (MME) and is in charge of rule-making, regulating and supervising economic activities related to the petroleum industry.

Besides the creation of the CNPE and the ANP, the Oil Law introduced a concession-based regulatory model, in order to attract new players to the market, thereby increasing competition and investments. The mechanism used to achieve this goal is the bidding of the concession of exploration, development and production activities. Up to now, ANP promoted fifteen bidding rounds under concession contracts. The Round 8 was scheduled to happen in November 2006, but it was suspended by a legal injunction in the beginning of the first day. Later, in February 2013, ANP effected the cancellation of this round and ordered the refund of all participation fees, and bid warranty to the participants. A summary of the results of the concession bidding rounds is listed in the table below. 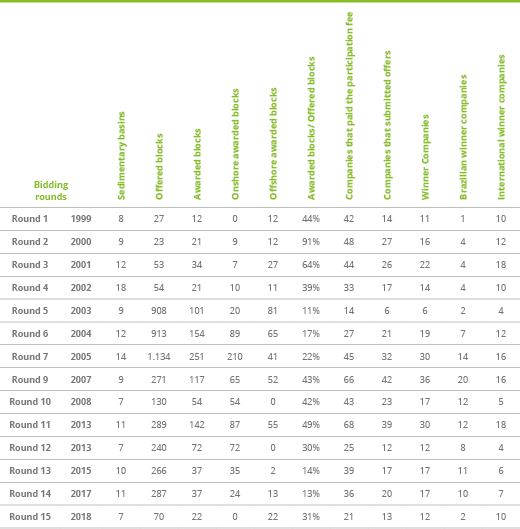 The introduction of small players in the market started in 2001, when Petrobras put up to auction 73 mature fields. In order to encourage the participation of smaller enterprises, the size of the blocks was dramatically reduced from the Round 05 (2003) onward. However, this strategy initially failled, since Petrobras acquired 84% of the licensed blocks. The presence of small players was effectively consolidated in Round 07 (2005), which successfully inaugurated the participation of marginal fields in the ANP bidding rounds. The success of this experience with marginal fields culminated in a second bidding round exclusively oriented for this type of field. Twenty-one marginal fields were awarded because of the two bidding rounds in 2005 and 2006. In 2015, ANP promoted the third bidding round oriented to small companies and in 2017 the fourth round.

From 2018 on, these marginal accumulations area will be offered in an Open Acreage Process. In this sense, relinquished marginal oil fields and explorations blocks that were not awarded in the past bid rounds or that have been devolved to ANP will be continually offered.

In 2007, Petrobras reported test results performed with 08 drilled wells in the pre-salt area to CNPE. These results pointed to a new significant oil province in Brazil with high volumes of recoverable oil and gas. In view of this, CNPE issued Resolution No. 6 of November 8, 2007 that triggered a great change in the regulatory paradigm of the national oil industry. In Article 2, the Resolution determined the withdrawal of 41 exploratory blocks only one week before the presentation of the bids for Bidding Round 9. Additionally, in Article 4, the same Resolution ordered the Ministry of Mines and Energy to assess, as soon as possible, the necessary changes in the legal framework in order to address this new paradigm of exploration and production of oil and natural gas in Brazil. Afterwards, an inter-ministerial Commission was set up in order to examine and recommend the changes in the legal framework.

As a result, by the end of August 2009, the federal government disclosed proposals for major changes to the country’s regulatory framework concerning the exploration and production of oil and natural gas for both pre-salt region and strategic areas outside the pre-salt (i.e. new areas with analogous characteristics to those of the pre-salt area, which represent low exploration risk and high potential for oil production). The package of laws was approved in 2010 and is composed by the following:

Law 12.351 of December 22, 2010 - It lays out the production sharing regime for E&P activities in the unlicensed pre-salt and strategic areas under which Petrobras will be granted operatorship and a participating interest of at least 30%. In addition, the same Law instituted a Social Fund to manage the country’s revenues received from production sharing contracts, including the federal government’s share of signature bonuses, royalties and receipts from the sale of its share of production from production sharing contracts. The fund is to provide a regular source of funding for projects and programmes dealing with poverty, education, culture, science, technology and the environment.

Law 12.276 of June 30, 2010 - It establishes an onerous assignment of rights by the State to Petrobras, granting to the latter the right to produce up to 5 billion boe in pre-salt areas in exchange of larger ownership share. Because of the Law 12.276 of June 30, 2010, the onerous assignment contract (transfer of rights) was signed on September 2010 granting to Petrobras the rights to carry out E&P activities on the following areas: Florim, Franco, South Guara, Iara Offblock, South Tupi, Northeast Tupi. Additionally, the area of Peroba was also included in the contract as a contingent area. Finally, it is worthy to highlight that as well as in the concession-based framework, the ANP will be responsible for promoting the future pre-salt bidding rounds and regulate the contracts.

After years of great expectations, the 1st Pre-Salt Round took place on October 21, 2013. In this round, a single area was granted, namely the Libra block detailed below:

Although 11 companies had subscribed, the consortium above formed by five companies was the sole bidder and won the license.

The Law 13.365 of November 29, 2016 relaxed the Law 12.351/2010  allowing  Petrobras  to have the right to choose the auctions that will participate. Once the technical parameters of each auction are published, Petrobras has 30 days to express interest in participating. The state-owned company must also indicate the percentage of interest. The CNPE will establish the percentage of Petrobras’ participation in the tender for the pre-salt blocks, which must be at least 30%. A tender will be opened for each block, if Petrobras does not exercise its preemptive right, but the company can still participate, under the same conditions as the other competitors.

Since the last regulatory changes in the E&P in the pre-salt area, three other production sharing rounds occurred with greater completion for the blocks, and with the presence of majors IOCs, as can be seen in the table below.

Results of the pre-salt rounds (PSA) under the new regulation

So far, there were only 3 blocks without an offer in the pre-salt rounds, one in the 2nd PSA, one in the 3rd and one in the 4th.

Almost five years (2008 – 2013) without E&P bidding rounds, due to the discussions over the new regulatory framework, have deeply affected the industry. The exploration pace slowed down. The immediate effect of this interruption is the postponement of investments and discoveries. In addition, it hindered the expansion of companies that grew up in the country, focusing on the consistency of the sector opening process. In the absence of new opportunities, these companies redirect investments for exploratory alternatives in other countries, weakening the domestic industry.

The hybridization of the Brazilian regulatory framework was made more complex by Petrobras’ operating monopoly over the Pre-salt blocks, but as this rule was removed in 2016/2017 the positives results could be felt in the last PSA bidding rounds. Hence, the new model still considerably enhances the State’s role, but the recent changes makes the environment friendlier for investments from other oil companies.

Libra’s estimated recoverable volumes are astonishing. However, it is worth stressing that differently from the long-standing concession contracts, PSA are still immature in Brazil, with only four rounds occurred so far.

Finally, despite the turbulent time the oil industry has faced after the 2014 crisis, the regulatory changes such as local content being relaxed, the renewal of Repetro and specially the removal of Petrobras as the sole operator over the pre-salt and a multi-year planning of bidding rounds launched in 2017, gave a strong and positive perspective for the oil industry in Brazil. This clear and important agenda brings more predictability, increasing reliability, and enabling the oil companies to better plan their investments in E&P in Brazil.

The Brazilian National Agency of Petroleum Natural Gas and Biofuels (ANP) has issued a series of statutes relating to the obligations of concession-holders and pursuant to the directives in brazilian law.

With the announcement, in 2007, of the discovery of economically recoverable oil reserves in the Pre-salt layer of Campos and Santos basins, the Brazilian government faced a great opportunity to boost country's development. One of the actions taken by the Brazilian government to meet these challenges was to intensify the implementation of a local content policy, which began in 1999 in the E&P segment of the Oil & Gas industry (O&G).

An overview of the Brazilian Upstream Taxation