Orange Poland, Nornickel and Plzensky Prazdroj win Deloitte Green Frog Awards for the best integrated and sustainability reports in the CE & CIS region for 2018. This year, Russia and other countries of the Commonwealth of Independent States joined the initiative. Awarded reports were chosen from 112 reports, which were taken into consideration during this year’s edition. The awards gala was held in Zagreb, during the “Investing in Sustainability” conference organized by Deloitte.

By rewarding the best non-financial reports, Deloitte contributes to increasing the awareness of the benefits and business value of sustainable development. Last year, 69 reports competed for the award. The total of 112 reports submitted this year set a new record – the majority of reports came from Poland (44%) and Croatia (18%)

Deloitte's Green Frog Award for the Best Integrated and Sustainability Report is an initiative that aims at promoting sustainability as the foundation for business success. From year to year, more and more participants are invited to this competition, but this year is particularly impressive

We are hoping that Croatian companies will recognize the need of integrating sustainable goals into strategic goals, as an indispensable key condition for a long-term growth and success 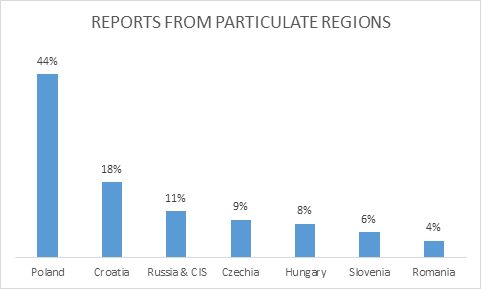 Jury and the awarding process

The Green Frog Award is a two-level process:

Every year, the number of reports submitted to the contest increases. In this edition, 112 reports were submitted for national eliminations, out of which the best 10 were promoted to the regional level of the Green Frog Award.

Every year, we note that the quality of reports submitted to the competition increases. What is more the number of integrated reports also rises. This year integrated reports accounted for 15 percent of all reports submitted to the contest, out of which 60 percent were subject to independent external verification. It shows that the leaders in our region started to adopt the best global practices. In this year's edition, 81 percent of reports were prepared in line with the international Global Reporting Initiative standard (GRI), with even higher number on particular markets: 90% in Poland, Russia & CIS, and 80% in Croatia

Companies that want to win the recognition of the Jury must constantly develop a strategic approach to sustainable development management, start integrated thinking which will materialize in true integrated reporting, strengthen transparency and improve risk management involving climate change

All of the reports submitted this year were prepared in line with International Integrated Reporting Council (IIRC) guidelines. Markets leading in integrated reporting are Poland (24%) and Croatia (20%). Over one third of all reports were externally verified. All of the externally verified reports were prepared in line with Global Reporting Initiative (GRI) methodology and standards. Most popular standard of non-financial assurance is ISAE 3000.

The evolution of reporting

Measuring and disclosing the impact of company's operations is a sign of maturity and readiness to tell the company's story that goes beyond offered products or services. More organizations decide to present their contribution to economic growth, the development of local communities and the management of their environment footprint. The impact description should indicate both positive and negative effects and preferably, be based on quantitative information and not only qualitative stories. What we see as a new growing trend in our region is that leaders enrich their brand storytelling (and use it more often for managerial purposes) with solid facts such as contribution to GDP creation, sustained employment throughout value chain or generated household income. What is important, these measures come from a robust analytical and calculation process

Green Frog Award is an annual recognition awarded by Deloitte Central Europe and other regions for the best sustainability and integrated reports. It aims at identifying and rewarding excellence in corporate non-financial and integrated reporting in Central Europe and other selected regions. Green Frog Award is being supported by the Global Reporting Initiative and International Integrated Reporting Council. The criteria of the contest were presented for consultation to both organizations.

The Green Frog Award (GFA) was launched in 2000 in Deloitte Hungary and was embraced step by step by other CE countries (the Balkans joined in 2009, Czech Republic in 2012, and the Baltics in 2013). This year, Russia and other countries of the Commonwealth of Independent States joined the initiative.

This report presents a mature approach to management and having a business model, which integrates the finance and ESG perspective. Principles of Balance, Credibility and Reliability are highly represented – the report shows not only strong sides of the organization but also areas for improvement. The report is comprehensive in its content, well-structured and effective in navigation - with no harm to it’s complexity. Additionally, the report has been submitted for external verification in accordance with standard ISAE 3000.

Photos From the Awards Gala

Nornickel – Best sustainability report in the CE & CIS region for 2018

While treating facts and material in a balanced manner, the report offers a tangible deep-dive view of where Nornickel stands on sustainability, what role it plays and how the Group is progressing, including strengths and weaknesses. The report built around a wider context involving the UN Global Compact, the Global Sustainability Goals and key trends behind the transformation affecting the industry, the Group and related stakeholders. Readers can feel being treated seriously as content is reach and comprehensive, prepared in a solid way consistent with the international standards and approach.

Example of the consequent continuation of the high reporting standards based on international standards and guidelines, presented in a creative, attractive and engaging way benefitting from current communication trends based on new technologies. Easy-to-understand for the reader, the report presents the business model, the impacts of its value chain and how the company plans to manage them in a strategic manner. Content built on story telling – informative, yet of sufficient length. What stands out is the visual side. The report is also accessible to a wider audience – also available for readers with sand-blindness.

He is responsible for analysis in the field of energy, industry and infrastructure projects in Central Europe, Commonwealth of Independent States and North Africa. He is a leader for due diligence process management in the energy sector – including for wind power plants.

He has a wide experience in the process of implementation EU requirements including IED directive, running the process of Environmental Impact Assessment of energy-related and industrial investments.

Hans is a member of the Board of Director of CSR Europe since 2011. In June 2016 he was appointed Chair of the Board.

Hans has more than 15 years of experience. Before joining Hitachi’s European headquarters in the UK at the beginning of 2008, he worked in different senior roles in the oil and chemicals sector in Belgium, France and The Netherlands. Hans Daems holds a Masters degree in Linguistics as well as a Masters degree in Communication Sciences.

Every location and company has messages to convey and measurable business goals to achieve. Emiliano helps turn challenges and goals into concrete, customised projects that put governments and companies in front of their target audience.

He also assists clients in getting clear on their business and communications goals and devises strategies to get them there through Emerging Europe's channels.

Emiliano is also involved in the expansion of the Emerging Europe publication, which has grown to become the global leading platform about business opportunities in CEE, serving as a source for media such as the Economist, Wall Street Journal, Bloomberg, CNBC and reaching an audience of 1.5 million per year.

His role also sees him identifying synergies and expanding Emerging Europe's network of associates all over the world.

As Managing Director of the Business Council for Sustainable Development in Hungary, is motivated to promote sustainable practices, knowledge-sharing and cooperation between actors of the Hungarian business sector.

She has broadened her perspective internationally, while she worked for 17 years in the building construction industry and while she hold the European Regional Managerial position for 3 years.

Since October 2014 she holds the position of the General Director in FOB. Moreover, as a member of the Management Board, she participates in the process of strategic development of the organization. She is also responsible for the coordination process of the Polish Diversity Charter and cooperation with the Diversity Charters Platform under the patronage of the European Commission.

She is an expert in the field of communication, CSR, sustainable development and diversity management. She gained her professional experience in large corporate groups, in the financial-insurance industry and in the energy sector.

He is responsible for sustainable growth of ACCA recognition and raising ACCA’s brand reputation in Poland and Baltics. For few years he was Deputy Director General at Polish Confederation Lewiatan and member of the BusinessEurope Executive Committee.

Previously, he held the position of Director for Programs at the Foundation for Polish Science and Member of the Strategic Advisory Board to the Prime Minister of Poland.

He holds MA in sociology and political science and is a former lecturer at Warsaw University. His areas of interest include financial sector, public policy, education and international relations.

Andrew has authored and contributed to a number of international business, investment and trade-related publications, guides and reports, mainly about the CEE region. Trained as a journalist and a film director, he has worked for broadcast and print media for over 15 years. Since the beginning of his career he has covered business, investment, trade, macro-economy and political economy. He regularly interviews political and business leaders about economics, business and politics. He is a moderator and a panelist at international economic and business events, and a media commentator. Currently, Andrew is pursuing a PhD in nation branding.