On August 11 2015, China has shocked global financial markets by devaluing the RMB against the USD by about 2%. In a year, accumulated depreciation against the dollar is 8% while foreign reserves at $3.2trn (comparing to $3.6trn a year ago). The economy’s "two track" characterises remain intact – a strong consumer sector and a struggling manufacturing industry. The performance of trade sector has been consistently stable with monthly trade surpluses around $40bn. From the perspective of the Chinese policymakers, the minor adjustment of the exchange rate one year ago was never about a simple devaluation rather a prelude of fundamentally reforming exchange rate mechanism. Indeed, the RMB exchange rate has been managed against a basket of currencies whose weights are undisclosed since last December. So the questions which we would like to pose are – first of all, what is the overall assessment of the reform? Second, what would be the next step? And finally, what is the outlook of the RMB exchange rate next year?

If China did not adjust the RMB exchange rate a year ago, which means more reserves would have been run down in order to defend an exchange rate which was out of whack. Meanwhile, confidence might well be more subdued today. We may likely to see a more pervasive dollar-hoarding behaviour among firms and individuals. Today, there is no panic; and the reductions of foreign reserves could be interpreted as firms’ external debt repayments and their desires for acquiring relatively under-valued oversea assets. The RMB held up against most currencies amid the havoc brought about by the Brexit. The fact that most Asian currencies and some major ones which are being viewed as proxies for China demand (e.g., Australian dollar) have even rallied against the greenback in past year suggests that the market sees the mild depreciation of the RMB engineered by the People’s Bank of China as an overdue adjustment. All in all, China is better off by embarking on a more flexible exchange rate regime. In hindsight, the PBOC could have made a more meaningful adjustment initially, say 5-7%%, in order to fulfil market expectations. The reality of situation is that foreign reserves began to stabilize after about 8% of devaluation against the dollar. In other words, a one-off, but more meaningful devaluation, perhaps would have saved some reserves.

The next step to be taken by the PBOC could well depend on external environment. In the wake of the Brexit, the global economy is facing greater risks of stagflation and proliferations of negative interest rate policy by central banks. For China, the largest trading nation, the challenges are how to cope with bubbles or distortions by ample liquidity, a prolong strength of the USD, and the trade-off between a relatively high GDP growth and structural reforms. In our view, further reforms of exchange mechanism are vital. What the PBOC has done so far, in essence, is to increase transparency (e.g., basket with undisclosed weight and the relationship between spot rate and the previous day’s closing price), but a flexible exchange rate won’t be on the agenda for many years. Logically, greater fluctuations of RMB exchange rate should be gradually introduced. At the same time, China should draw lessons from other emerging markets. For example, Korea has paid a huge price for having the Government implicitly guarantee Chaebols’ external debt in 1997. So the policy implication is to allow certain zombie companies fail. Otherwise, continued build-up of corporate leverage (especially among SOEs in sector which is beset by overcapacities) would result in stress in financial system, in turn, undermining exchange rate stability.

In short, China has made significant progress in reforming the RMB exchange rate within a year. On Oct 1 2016, the RMB will be officially included in SDR basket. The currency basket which is loosely based on China’s trade with other countries allows policymakers to move away from dollar-peg and to overcome “fears of float”. However, exchange rate reform can’t take place in isolation. Against the backdrop of resilient consumers, a benign inflation and improved investor sentiment, China should make some concrete in SOE reform and open up service sector. On balance, we see the RMB depreciate 3-5% against the dollar due to widening interest rate differentials between the US and China in 2017 (our forecast of USD/RMB is 7.0 in 2016). 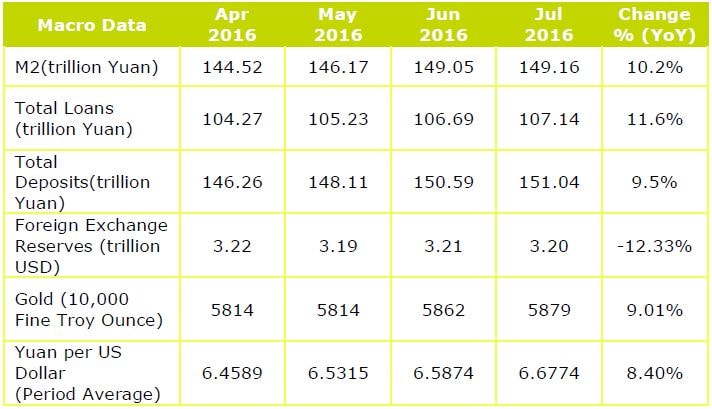 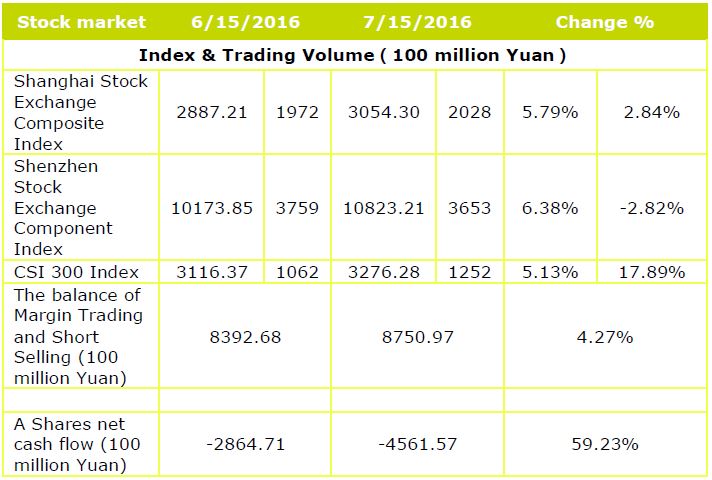 Following in the footsteps of State-owned arch-rival Petro China which structured a similar type of deal last year, Sinopec plans to divest 50 percent of its gas pipeline holdings in the Sinopec Sichuan-to-East China Gas Pipeline Co.

Key consequences of the deal
Although Sinopec hasn’t as yet put an amount on the transaction, the price of the pipeline is likely to be quite high as the company holds over 1,700 kilometers of pipeline, delivering 12 billion cubic meters (423 billion cubic feet) of natural gas per year directly into the key consuming market of Shanghai.

Petro China, in a similar transaction last year, sold 50 percent of its stake in the Trans-Asia Gas Pipeline Co. to a unit of the State-owned China Reform Holdings Corp. for US$2.4 billion.

Financial pressures appear to be one of the main driving forces behind the partial sales of the gas pipeline assets at the two State-owned oil behemoths, given the low price of oil and depressed corporate profits. The latest deal should generate an estimated RMB14 billion in profit for Sinopec, though some of the money will be used to support continuing operations and pay off debts.

The Chinese government, on the other hand, has been keen on boosting investment in clean energy including natural gas to reduce carbon emissions and improve air quality. They are therefore pushing for a greater penetration and use of natural gas. Currently, China has only 90,000 kilometers of gas pipeline, which is less than a fifth of the length of the U.S pipelines. This inadequate pipeline coverage is one of the reasons for the bottleneck in natural gas consumption. This is probably also why both Sinopec and Petro China have said money raised from the sales will also be used to lay more natural gas pipelines, expand capacity and build storage facilities.

Pipeline reforms are off the table
Can we read this as a signal of pipeline reform? Not necessarily. We think these transactions are designed to boost short to medium-term profitability, rather than promote serious reform. Prior to these sales, it was expected that oil companies would spin off pipeline assets and form an independent pipeline entity. However, in both deals, Sinopec and Petro China will continue to hold majority stakes and to invest heavily in the natural gas business. This is an indication that China has, for now at least, shelved its plan to spin off pipeline assets. Pipeline reform has run into two major bottlenecks. First, oil majors are resistant to the reform because they want to protect their market position despite the already-thin profits; second, government control over gas prices makes the industry less attractive to private investors. Thus, pipeline reform still has a long way to go.

The time for M&As is coming

Growth for express delivery industry has hit a new high. According to latest release by the State Post Bureau, express industry nationwide delivered some 13.3 billion packages in the first half of 2016, a comparable jump of 56.7 percent while revenues reached RMB171.5 billion, a 43.4 percent increase. However, the express delivery industry is not without its own shares of serious problems, including homogenization of operations and services and similarity of profit model. Moreover, CICC data analysis show that the current gross margin for the express delivery industry as a whole has been sliding down to 5% - 10%, a far cry from the level of around 30% in 2007. 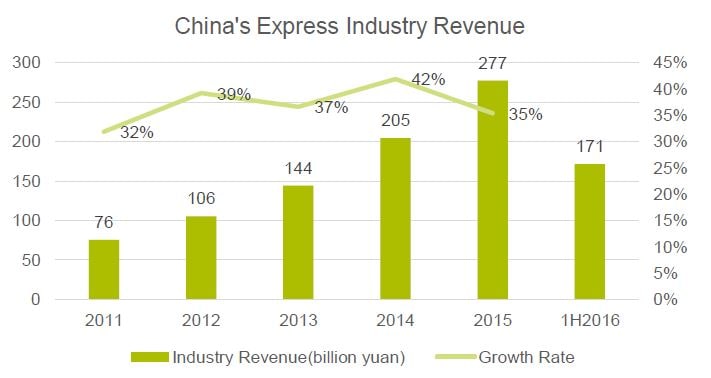 Express delivery industry ushered into a tidal wave of backdoor listings. As of July 2016, companies which went public by way of backdoor listing included SF, Shentong, Yuantong and Yunda. In the meantime, their major competitors (such as Zhongtong, Quanfeng, Deppon Logistics) all have plans to complete public listing either in 2016 or 2017. The strict listing standards will force the transformation of family business, enhance service quality, open up new markets and integrate industry as a whole. 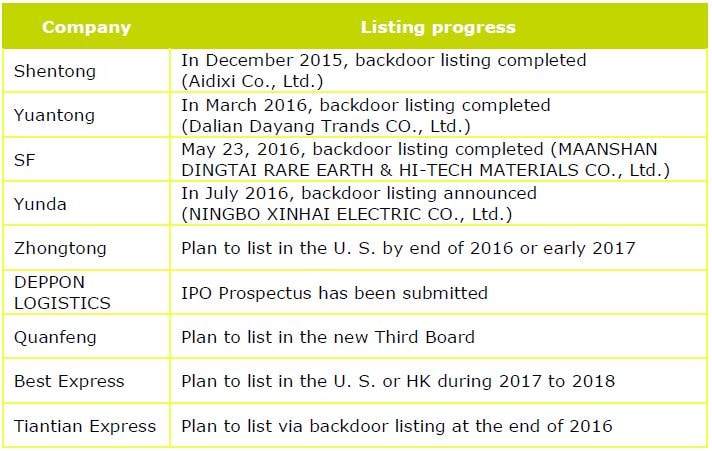 In contrast to the United States where there is a high level of concentration with the top three express delivery companies accounting for 90% in market share, market competition in China is relatively scattered (The Top 8 companies occupied 77% of market, the other thousands of express companies accounted for 23%). So, there is still quite some room for industry integration. We believe future business opportunities will emerge in M&As and advisory services.

From policy perspective, the State Council executive meeting held on July 20th also proposed that the logistics industry is an important part of the modern service industry. Establishing an “Internet Plus High-efficient Logistics” system will be an important initiative for expanding aggregate demand and promoting structural reforms in the supply side. In addition, it is conducive to promoting employment and improving total factor productivity. In future, express industry consolidation and multi business integration will become the norm among the most express companies. We believe future business opportunities will emerge in M&As and advisory services.

Thanks to SUV sales, auto beat expectations in 1H of 2016 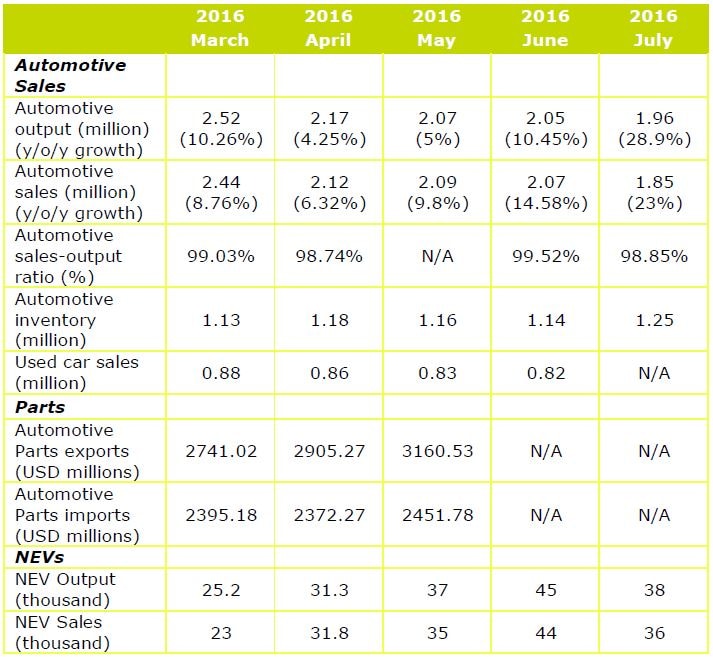