A window of opportunity in the housing market frenzy

Last September, investor sentiment was at its lowest ever after government intervention in the stock market was made necessary by a spectacular fall in equity value (SSE Composite Index from 5178 on June 12th 2015 to 2638 on January 27th 2016) wiping out approximately RMB20-30trn of wealth (a back-of-the-envelope estimate). Nevertheless, given that equity financing only represents 5% of total corporate financing and about of 10% of consumer wealth, we believe that for China the stock market is merely a side show. Of course the extremely under-developed capital markets constrain China’s committed leap away from the middle-income trap, for without well functioning stock and bond markets its growth could well become unbalanced and unsustainable. However, in the short run, such a constraint also draws attention to China’s greatest strength – the enormous amount of savings (mainly by consumers) - which disguises much inefficiency in the economy. A key question is whether the strength of consumer savings is enough to withstand swings in housing prices. Again, by a rough estimate, housing related investment affects about 1/3 of total investment. If the housing market tumbles, ipso facto, the economy will have a hard landing.

Over the past 12 months in all of the major Chinese cities housing prices have appreciated sharply (20-30% in Beijing, Shanghai, 40% in Shenzhen and about 25% in Nanjing and other major cities). So much so, that during this year’s National Day holidays, the future of the housing market in the tier 1 and some tier 2 cities became a subject of nation-wide debate. Nine cities, including Beijing, Shenzhen, Nanjing, Suzhou, Xiamen etc., have come up with restrictive measures in order to cool off the overheated housing markets. In essence, such restrictive measures include combinations of much higher down payments (could be as much as 70%) and even outright denial of 2nd homes for consumers.

Such a rapid increase in prices in major cities raises at least three important questions – 1) what are the chief reasons behind such asset inflation within such a short period of time? 2) what will be the consequences if the market crashes (a repeat of what happened to the stock market in 2015)? and 3) what are suitable policy responses, i.e. how should the government respond?

The obvious answer to the first question is liquidity. The Government has been trying to make banks step up lending for the past two years. Indeed, Governor Zhou Xiaochuan of the PBOC said this week that “a prudent monetary policy (read accommodative) and an active fiscal policy” are needed to ensure a moderately high GDP growth rate (which is widely viewed to be around 6.5%). However, banks are wary of lending to the industrial sector as it is plagued by overcapacity. The housing sector, given the high rate of domestic savings, is a much safer bet. On the consumer side, because the previous government introduced various restrictions of home purchases in 2008 when inflation was rising and CPI was at 6%, there exists a certain pent-up demand. Add to this the fact that most investors do not see much chance of the stock market giving good returns as it is still undergoing a healing process and that the RMB looks likely to further depreciate, it is only natural that consumers want to use real estate as a hedge against higher inflation and as an investment vehicle. In short, the current housing market frenzy in 1st tier cities (Beijing, Shanghai, Shenzhen and Guangzhou) and many 2nd tier cities (mainly provincial capitals) is caused by a host of factors - eased liquidity on the one hand, and unfulfilled pent-up demand (trading up is a common phenomenon in large cities) coupled with the expectation of inflation on the other. However, before we discuss consequences and policy responses, we would like to state that against the backdrop of a slowing economy, rising housing prices are more desirable than falling housing prices. We would also like to stress that even though younger Chinese consumers exhibit less risk aversion than their parents (consumer debt has increased significantly in recent years), the overall consumer debt/GDP remains healthy at around 40% (most of consumer debt is mortgages). 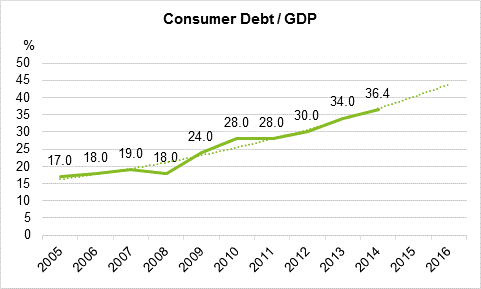 That is why in order to maintain around 6.5% of GDP growth and to reduce housing inventories (in many smaller cities), the Government is keen to have consumers increase their leverage. 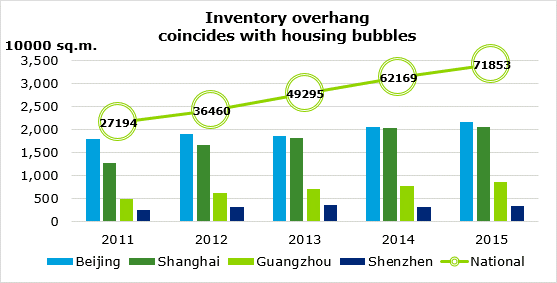 An important precondition for consumers to increase leverage is continued price appreciation. But housing prices in many major cities are already so high that they are nearing unaffordable and so may have already hit a plateau (although a crash is not likely yet). High property prices in major cities are also behind the continued capital outflows (reserves fell by $30bn, to $3.16tn in Oct 2016) that are weighing upon the RMB exchange rate. In the past commercial banks used to promote the business of domestic collateral lending but with the sharply rising prices in the domestic market they have been encouraging Chinese consumers to buy overseas properties using their Chinese properties or deposits as collateral (such practice is discouraged by the central bank in light of concerns on the RMB exchange rate stability).

The housing boom in some big cities coincides with stagnant markets in many smaller cities where the severe overhang of housing inventories is exposing local governments’ financial difficulties. The restrictions on home purchases which were introduced during National Day holidays are aimed at cooling off housing markets in 1st tier cities and some 2nd tier cities and redirecting the money to smaller cities. But we believe that reduced liquidity in Beijing, Shanghai, Nanjing and the like will not necessarily result in improved liquidity in 3rd and 4th tier cities as the government hopes.

So what should be the most suitable policy response? In our view the IMF’s recommendation to increase property levies and taxes is misplaced. Any home, when it is sold to Chinese consumers, has government taxes front-loaded onto it, and therefore the introduction of new property taxes would make homes, almost the only viable asset class in China, less attractive. This would almost certainly hurt the economy a great deal as the reality is that local governments’ finances are intimately tied to real estate transactions whose success depends upon housing prices holding up. Land transaction fees account for over 50% of most local governments’ fiscal revenues in recent years.

In this sense, the ongoing housing boom has made public finance reform more urgent, especially the need to weaken the link between local government finance and housing markets. If the government would allow farmers' homesteads (land previously allotted to farmers by the government to build homes but which cannot be transferred to urban residents) to be transacted more freely, the supply of land will increase immediately. This would automatically cool housing prices in most cities making restrictions on real estate purchases unnecessary. At the same time, if the Hukou system could be relaxed significantly, the demand for housing would grow. In short, some concrete steps towards privatizing farm land and reforming the Hukou system will make the housing market much healthier. 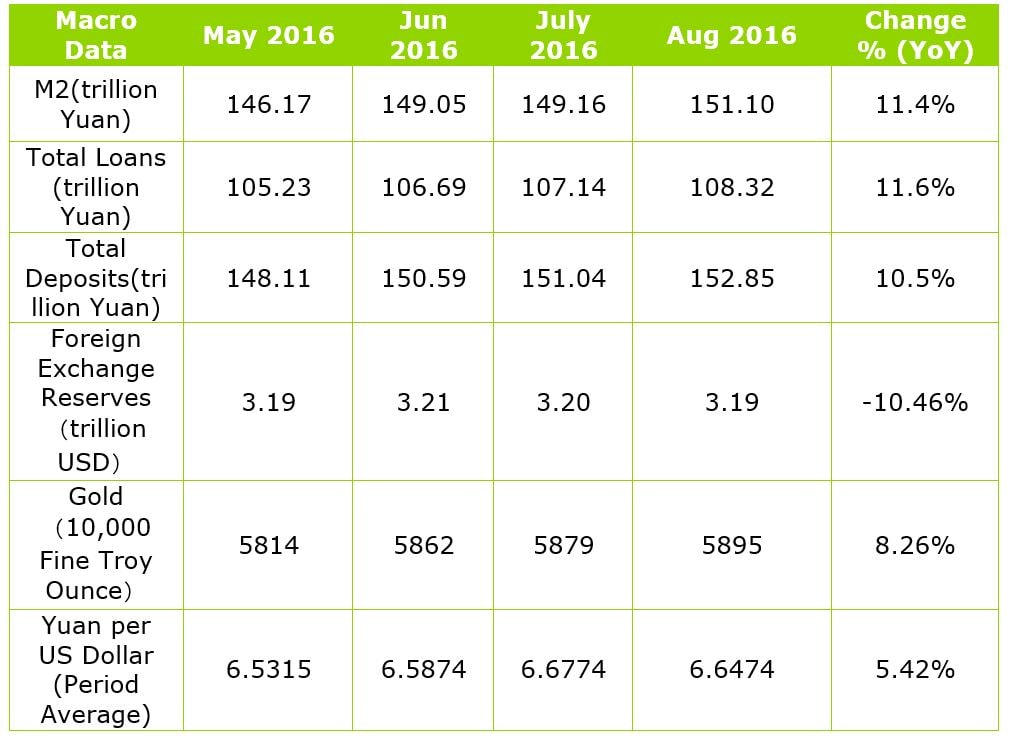 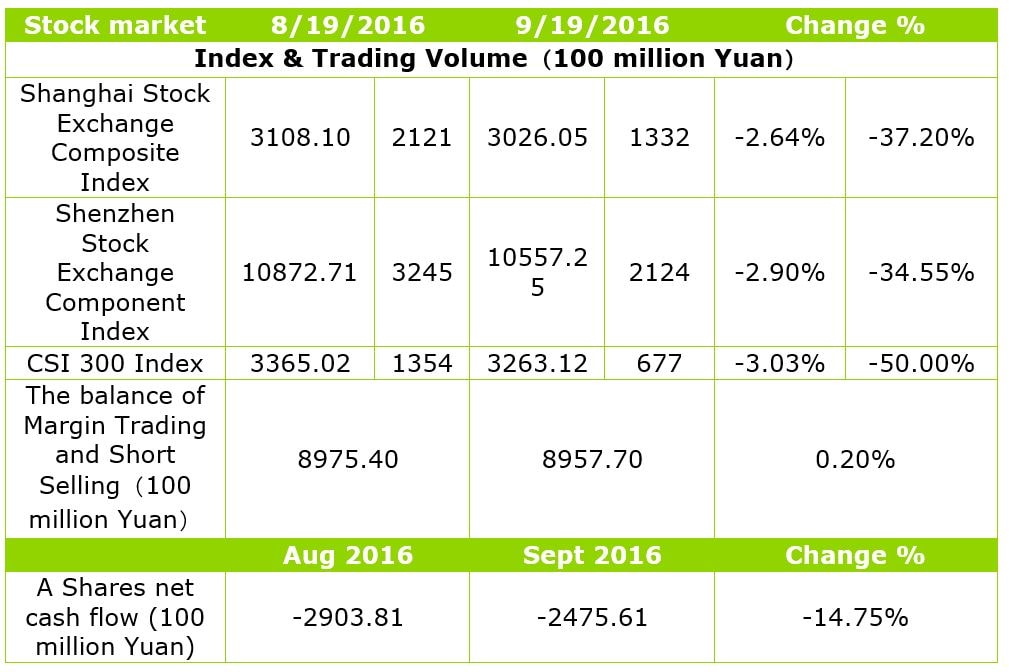 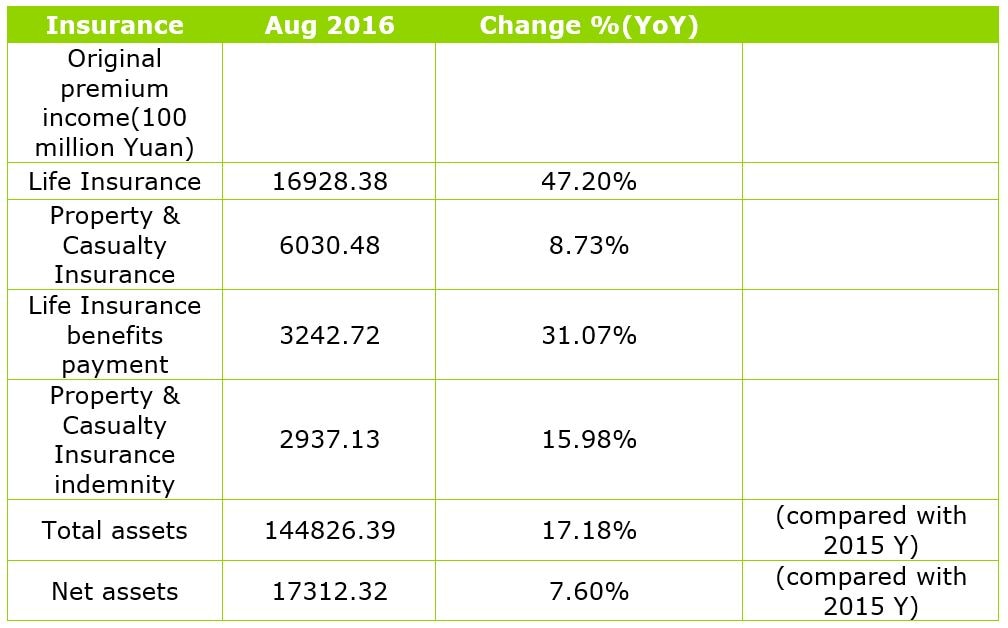 The central government approved another round of regional power sector reform proposals in September. These included electricity pricing reform and retail market liberalization pilot programs in 13 provinces/cities including Beijing, Gansu, Xinjiang, and Fujian. Up to now, some 20 provinces/ cities have started pilot schemes and a nation-wide reform is expected in 2017.

This round of power sector reforms started with the joint release by NDRC and the Energy Bureau of Document No. 9, entitled “Deepening the Reform of the Power Sector”. The report focuses on the gradual separation of electricity sales from electricity transmission and distribution. It also aims to establish a market in which electricity producers and users directly trade electricity. We expect to see four major changes in the near future based on this reform document: 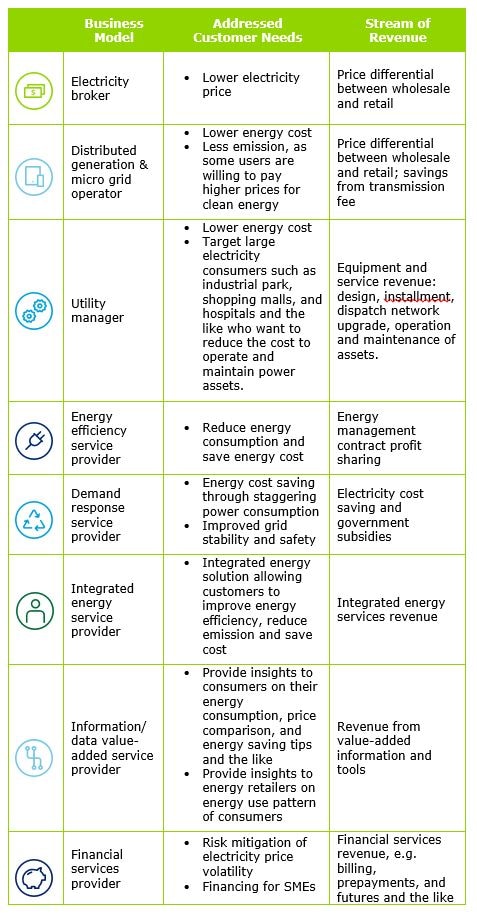 The K12 (it includes kindergarten all the way to the 12 grade) education market is presently valued at over RMB500 billion. However, the market is highly localized and scattered, with the top ten K12 education enterprises accounting for less than 4% of market share. Online education accounts for only 10.6% of market share, which, given the total number of primary and middle school students, is quite low. Although online education is facing challenges, it would provide third and fourth-tier cities with better education services, balancing out the disparity of educational resources between tier1 and 2 cities and the rest of the country. 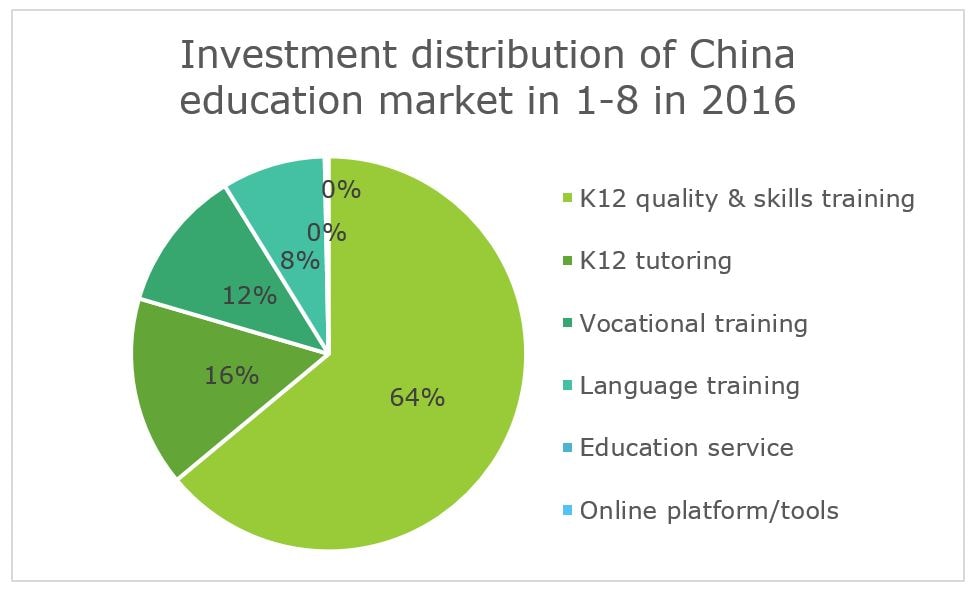 In 2016, educational services was viewed as the `hottest’ industry for investment by private equities (PE) and venture capitals (VC). According to ChinaVenture, an education-oriented venture capital fund, 43 investment cases succeeded in the education industry in the first eight months of 2016 with total transactions valued at around US$770 million, a leap of 39% over the US$554 million recorded last year. In addition, the average value of the transaction skyrocketed by 65%. In other words, fewer projects received more money, indicating that investors tended to invest in quality over quantity. The market of K12 skills training and K12 after-school tutoring accounted for about 80% of total investments, while professional and vocational training ranked third, accounting for 12% of total investments.

Compared with the investment boom, IPOs have fared less well in the domestic market. This is because education companies have had great difficulty in completing the backdoor listing process this year. As the updating of 'Private Education Promotion Law' has been accelerated in recent years, the classification, management and development of the privately-funded education industry is inevitable. Although the Securities Regulatory Commission has made stricter regulations for backdoor listing (after June 2016, the requirements for backdoor listing have been made the same as that of IPOs), numerous education companies still hope to go public by way of backdoor listing. However, between January and August 2016, only Longwen Education succeeded in going public through backdoor listing. With more encouragement on the part of the government towards investment in educational services, enterprises hope to use the power of the capital market to achieve a breakthrough in education services.

As competition in educational services intensifies, mergers and acquisitions will undoubtedly take place and there will be greater integration of online and offline education systems. There will be a rationalization of the educational services industry – with many small-and-medium-sized regional training institutions being forced to let themselves be acquired by bigger players or go out of business. Business opportunities will emerge in the realm of mergers and acquisitions, consulting and IPO services. 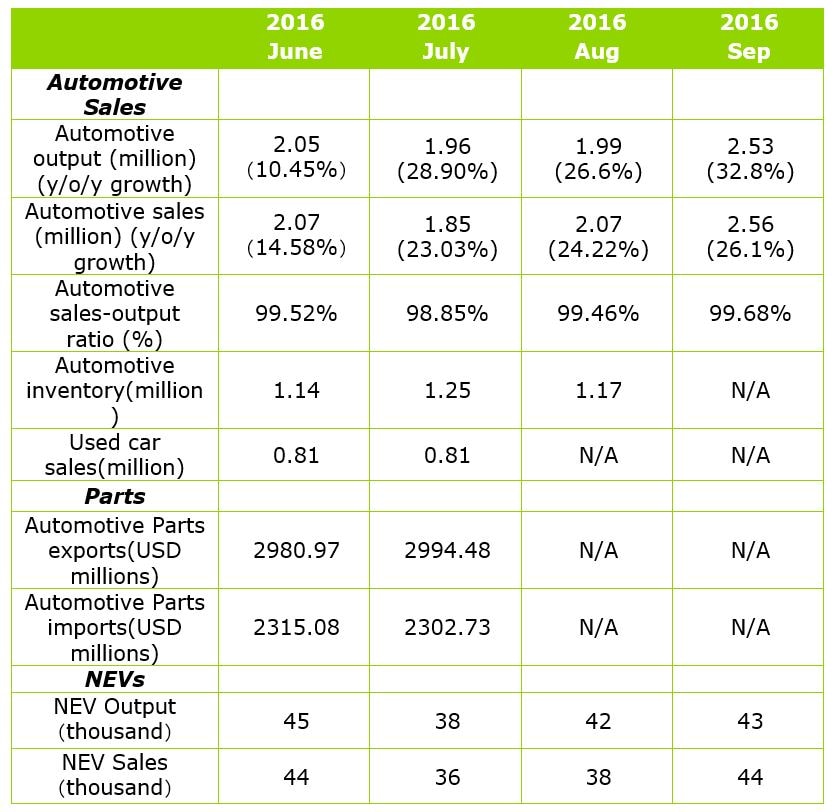 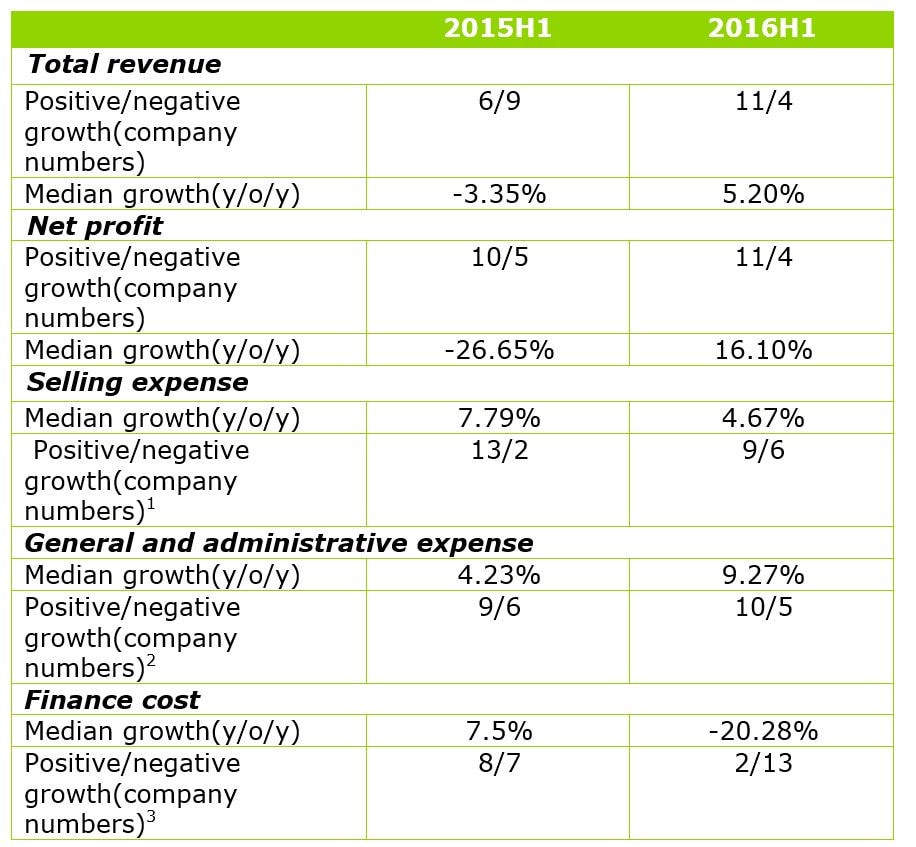 Deloitte Research selected 15 A-share and H-share listed auto dealership groups and analysed their revenues, net profits and costs in the first half of the year for the last two consecutive years. Overall, auto dealer groups have seen their revenue growth rebound thanks largely to demand regaining momentum. In addition, steady growth in the after-sales segment and a surge in the growth of financing and insurance services have significantly boosted dealerships’ profitability. The average profit margin has climbed to 8% in the first half of 2016.