Focus on financial stability with growth target in the bag

The April Producer Price Index (PPI) of 6.40% yoy showed a slight fall (-0.40% mom). This has got those investors who have been betting on China's reflation worried, especially as the pullback of the PPI comes at a time of drastic declines in commodities which in itself suggests that financial markets are getting somewhat concerned about the strength of China's economic recovery. In our opinion however, such concerns are largely unwarranted as they are based upon a misconception of the nature of the relationship between GDP growth and the labor market, among other things.

Chart: A mild correction of PPI does not imply return of deflation 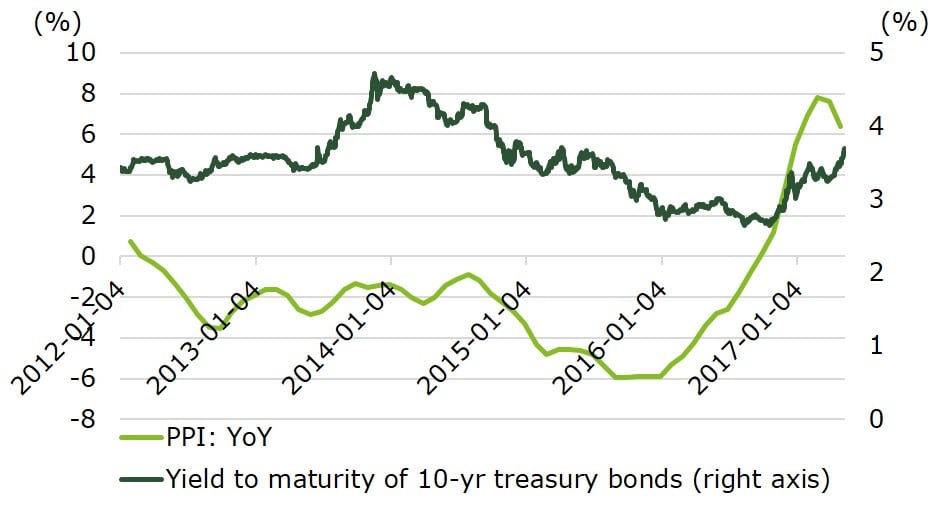 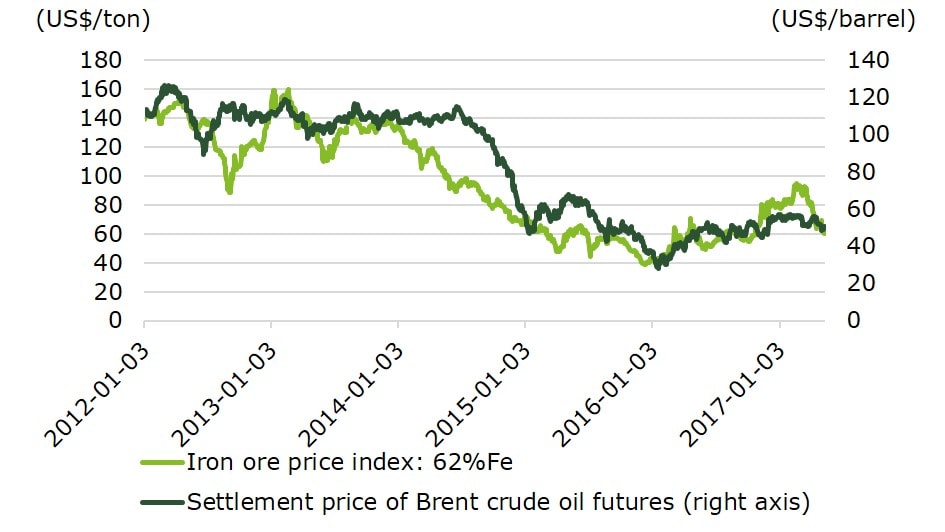 First of all, if the PPI falls continuously as it did a few years ago, the risk of deflation cannot be overlooked. But we were not at that point yet even when PPI was as low as in summer of 2015 (-5.95%) and so there is no need to be alarmist. But let us go back a little. Over the past several months the PPI increased significantly, an indication that China's mighty manufacturing sector has regained some pricing power on the back of a stronger global demand and domestic industry consolidation (despite the fact that corporate deleveraging has not panned out quite as anticipated). Nevertheless, some less efficient firms have been weeded out due to a persistently falling PPI. Such persistent decline of PPI until about two years ago simply force some firms to exit.

Better pricing power was one of the catalysts of the stock market rally last year (mainly H shares in Hong Kong) and of the run up of commodity prices. However, as the largest consumer of commodities such as iron ore and crude oil, the Chinese economy is effectively getting a huge tax cut from commodity exporters and oil producing countries should commodity prices and crude oil prices stay low. Therefore in the Chinese case, corrections of PPI are not indications of a weakening economy.

Second, financial markets in general, the equity market in particular which have a tendency to act first think later, has clearly underestimated China's economic resilience. On the other hand, soaring prices of iron ore (nearly up 50% from Q4 of 2016 to Q1 of 2017) indicates an overestimation of future demand of hard commodities in China and underestimation of necessary consolidation of the Old Economy. Let me explain why. The Chinese economy's extraordinary resiliency derives its strength from consumers' dry powder underpinned by high saving rate and rising incomes and their strong desire to upgrade their lifestyle. The strong consumption has been offset by the weakness of industrial sector, to a certain extent. However, the current GDP growth rate (6.9 in Q1 of 2017) remains high and deleveraging will eventually have to occur. Economic moderation is very much a precondition of deleveraging because a lower credit growth will result in a lower investment growth; and the base of investment in GDP is so high (about 45%). The misconception about GDP growth and employment or social stability is very entrenched in China mainly due to the fact that GDP growth has been boosted by repeated fiscal stimuli in the past. But as services are being promoted due to apparent short supply in many areas in China, GDP growth must be deemphasized (services may bring jobs but not necessarily GDP).There is only one way to maintain a relatively high GDP growth rate while at the same time bringing down leverage, and that is to inject massive equity into the corporate sector.

However, this is unrealistic given the current state of the stock market and certain constraints on SOE reforms. The current guiding principle of SOE reform is to transform the focus from assets to rate of returns. Hence large chunks of asset disposal or privatization won't be on the cards any time soon. This leaves economic moderation, by no means austerity, as the main means of containing leverage. The government is aware of this and initiatives like the belt and road conference are part of its attempt to manage the pace of consolidations of certain industries. But will the belt and road initiative actually be a boost to GDP growth?

Government leaders of 29 countries and many global CEOs met in Beijing last week to discuss the building of mega projects along belt and road countries. Our view is that China has got one thing right - to build a sound business environment one has got to have first rate infrastructure. Belt and road initiatives are about replicating China's growth model in many countries where infrastructure bottlenecks are stifling economic growth and deterring private investment. The undertaking itself should not be used as an argument for ramping up investment in sectors where over-capacities are evident. From this perspective, belt and road initiative is not a boost of GDP growth rate. The main criticism against the belt and road initiative is that the undertaking represents a one way traffic.

The best way for China to dampen such criticism is to work with other countries and supra-national agencies such as the World Bank and Asian Development Bank. From China's perspective, working with developed countries will be the best way to mitigate geopolitical risks which are rife in certain countries. From this perspective, the presence of CEOs from global MNCs is vital because participation of these large global companies could develop a model of partnership between public sector and private enterprises. Otherwise, there will be a risk of worsening asset quality of China’s banking system if banks are extending their loans not based purely based on political basis.

However, the real coup for China is that the US Administration has sent representatives to the much touted Belt and Road conference. This is a sea change in terms of attitude by the US towards China's initiatives (in 2013, the US was pressing its allies not to join the China sponsored Asian Infrastructure Investment Bank). Meanwhile, the Chinese Government has made an announcement to the effect that the Chinese market will be opened for US credit rating agencies and credit card companies and it has increased purchases of US beef and agriculture produce. And finally, despite the positive momentum, belt and road initiatives should not obscure the fact that consolidations of certain industries are urgent from a deleveraging perspective.

Given that Q1 GDP growth was 6.9%, much higher than the much touted "around 6.5%", the stated target set during National People’s Congress, such strong Q1 data have certainly given them wiggle room for tolerating "subdued" growth data in the second half of 2017. We take the view on policymakers' tough measures of reining in shadow banking as a mild tightening before the Fed tightening (June meeting seems a foregone conclusion as far as a rate hike is concerned). Such tightening which is aimed at "controlled failures" or "directional blasting" is about reducing moral hazard. The action itself has underscored policymakers' heightened concerns of financial asset quality, also reflecting their relatively relaxed stances towards GDP growth.

According to our most recent survey based on a focus group involving CFOs of many leading MNCs in industrial, drug and consumer sectors, most of them are bullish on their business in 2017. They also feel cross border payments have become easier compared to last year. Indeed, as China's foreign reserves have registered their 4th consecutive month of increase, confidence in the RMB has naturally improved. As a result, the forex market has taken the view that the USD/CNY exchange rate is likely to be capped below 7.0 this year.

Should we be tinkering with our 2017 forecast of 7.2/7.3? Forecasters are of course tempted to fall in with the consensus, but we have decided to stick by our forecast for the following reasons. One, interest rates between China and the US will widen favoring the latter and in turn boosting the dollar. Two, deleveraging is never easy and the least painful way of shedding debt is higher inflation, which will in turn put downward pressure on the RMB.

More importantly, China continues to amass foreign assets while at the same time to retire foreign currency debt. The adverse impact on corporate foreign currency denominated debt from a weaker RMB exchange debt is relatively insignificant. These factors remain intact. Therefore, we see no reason to tinker with our RMB exchange rate forecast. If the main objective of adjusting exchange rate on August 11 2015 was about injecting some flexibility into the exchange rate regime so that the RMB could be used as a buffer, the remarkable stability on the RMB exchange rate which we have seen since Q4 of 2016 seems to suggest the return to the dollar peg is temporary. Most CFOs of the focus group agreed with us on this. 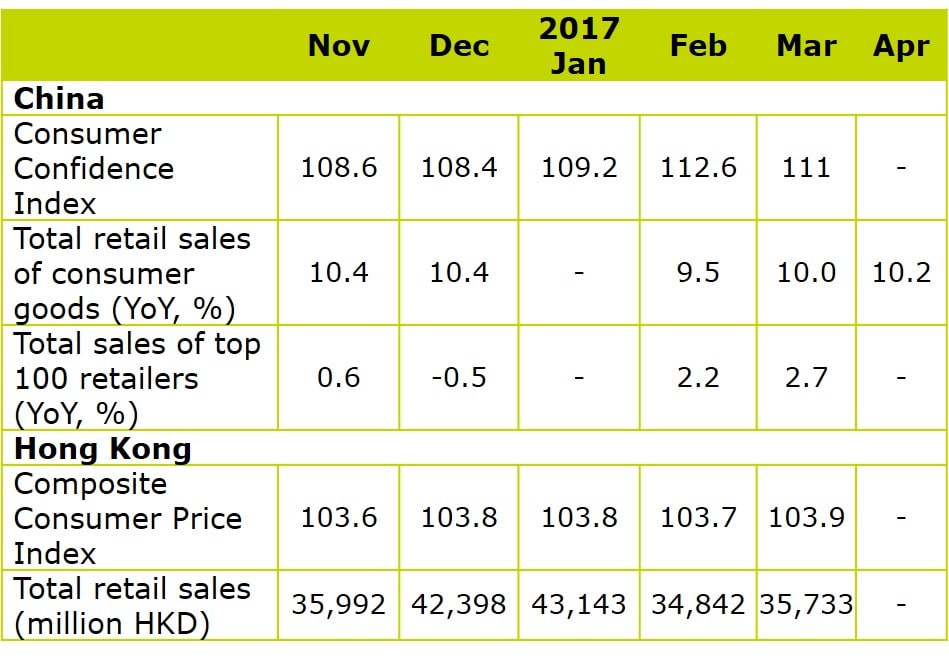 By the end of April, most of the listed retail companies in China have published their 2016 annual earnings reports. Deloitte research analysed their financial performances based on the different business formats these retailers are in. According to the performance reviews, gross revenue growth has stabilized but more than half of the listed companies have experienced profit decline. In order to achieve business upgrade and transformation and to obtain new engines of growth, retail companies are focusing on online and offline integration, format innovation, cross-border integration and so on. Different transformation strategies may lead to further differentiation among retailers. 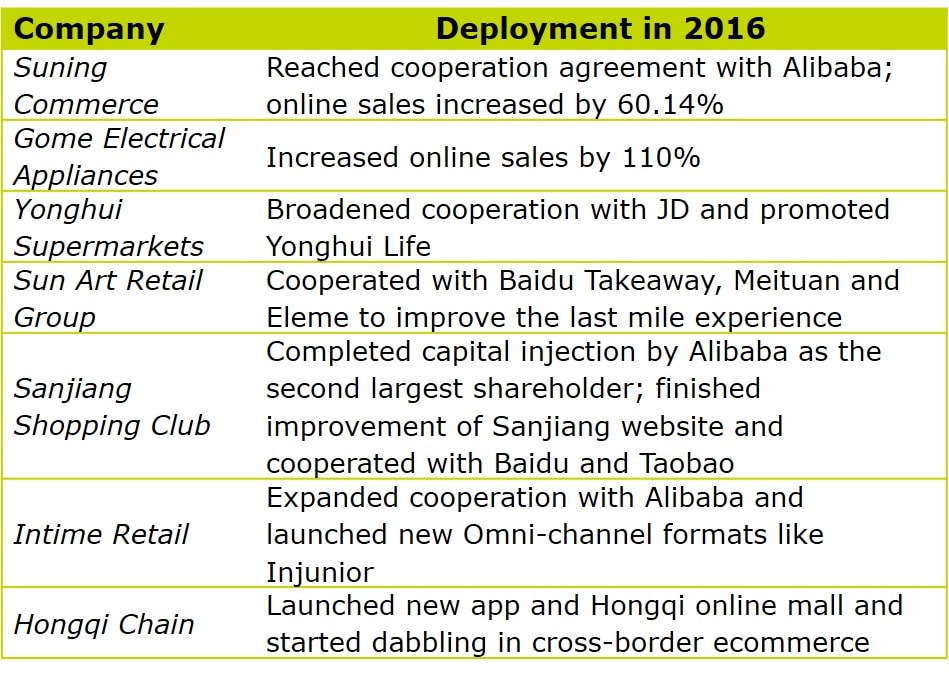 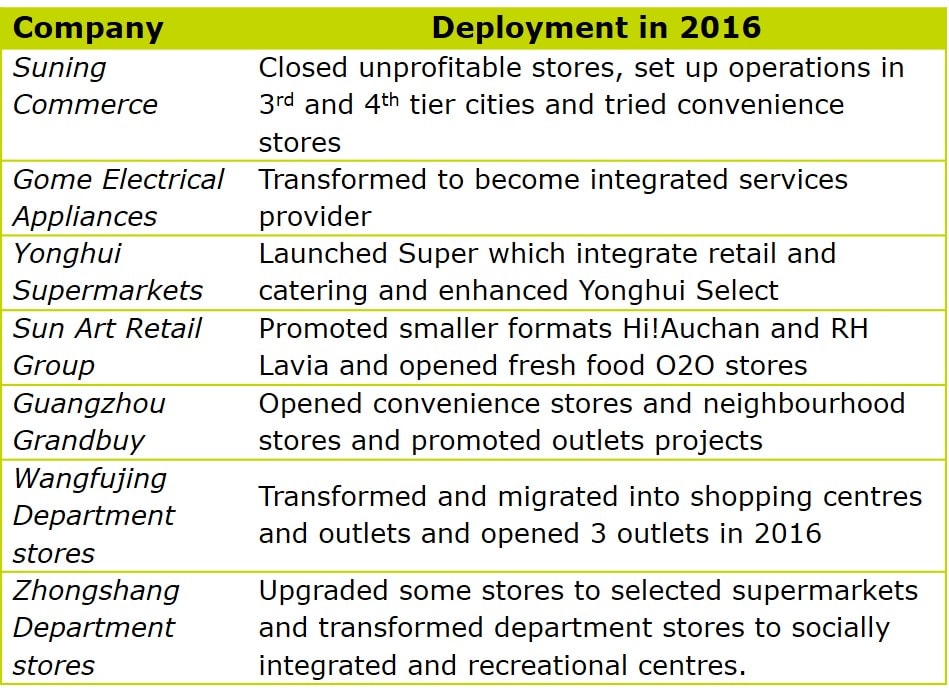 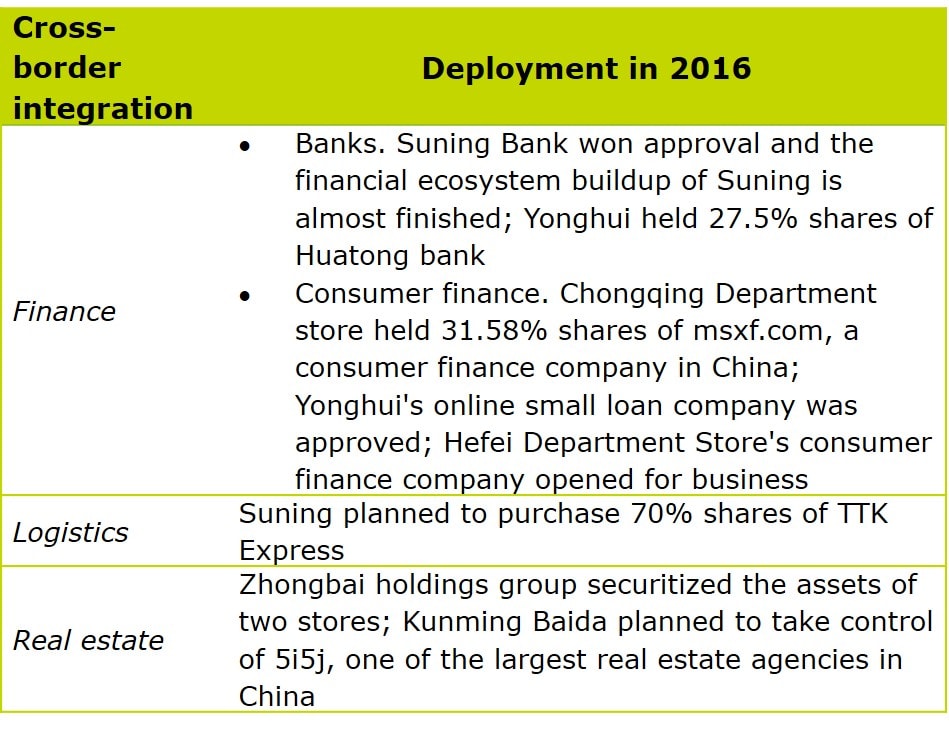 Telecom’s value creation in the future of mobility

"Mobility" — the way people move from point A to point B — is changing. Converging forces including powertrain technologies, light-weight materials, connected and autonomous vehicles, and shifting preferences are reshaping the future of mobility. In the process, new challenges and opportunities exist for companies across the telecommunications industry value chain which raises questions that executives will likely need to address:

We believe that value opportunity areas for telecom in the future mobility ecosystem exist in four domains:

Figure: Value creation in the future of mobility As of April 8, Beijing implemented a landmark reform program that separates drug sales from medical treatment at public hospitals. This will lower medical expenses and improve services for patients considerably. To ensure reduction in drug prices, Beijing has mandated transparent drug purchases, choosing suppliers through an open bidding process and requiring full disclosure of drug and producer information. According to the Beijing Municipal Commission of Health and Family Planning, reforms have already had an effect. The total value of drug purchases shrank by 8.4% in the two weeks since the reform program was introduced. 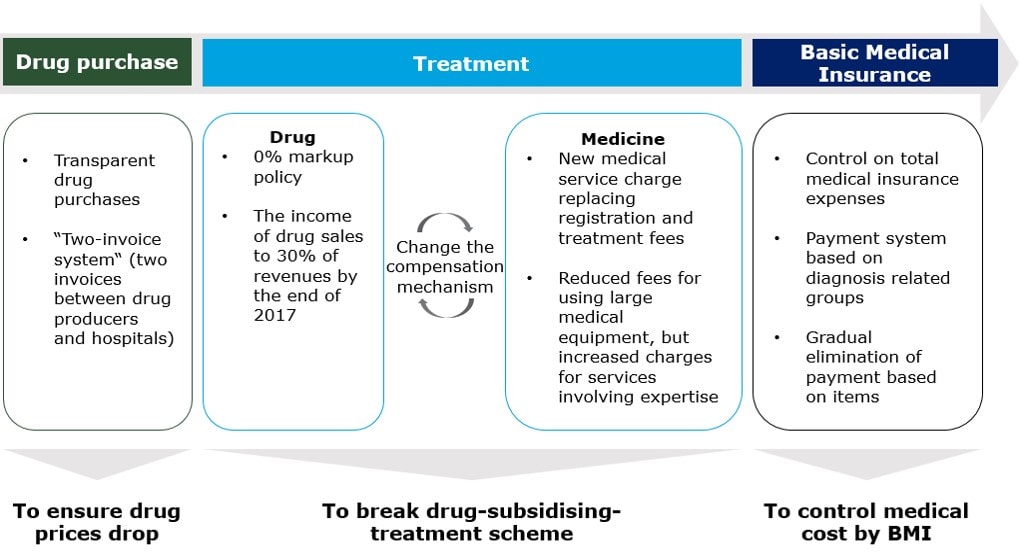 The Beijing medical reform is a bellwether, serving as an important benchmark for other provinces. Moreover, China is set to launch a comprehensive medical reform process in order to eliminate drug mark-ups in public hospitals nationwide before September 30, 2017, and local authorities are required to publish guidelines and plans before July 31 prior to the national deadline. This information was released in a guideline jointly published by seven government ministries including the National Health and Family Planning Commission. If the Beijing model is adopted around the country, there will be significant consequences for pharmaceutical enterprises and retail pharmacies nationwide. With the deepening of national medical reform, most pharmaceutical producers will be hit by declining profit margins. To safeguard profitability, pharmaceutical enterprises should go for quantity over price, thus securing inclusion on the reimbursement drug list of basic medical insurance in exchange for a larger market share.