Future of Automotive Sales and Aftersales

The global automotive industry is on the cusp of a monumental transformation. Besides technological trends in the area of connected car, e-mobility, and autonomous driving, we can observe significantly changing customer preferences in terms of mobility usage and buying preferences. Hardly any expert questions these developments, but what was missing from our perspective was a holistic understanding of what these trends really mean to the sales and aftersales business of an established original equipment manufacturer (OEM)–very concretely in terms of revenues and profits.

The aim of this study is not only to create transparency and quantify the trend effects and opportunities, but also to provide strategies and approaches to navigate through these expectedly dynamic and challenging future years of transition. In this edition of our study series, the geographic markets under consideration are China, the United States, Euro5, and Japan. The Euro5 market consists of Germany, France, the United Kingdom, Spain, and Italy. With these markets, Deloitte estimates to cover around 70 percent of the global new car sales market volume in 2035.

Deloitte assumes that connectivity of both cars (“connected car”) and customers (“connected customer”) will differ significantly across markets driven by technical infrastructure and consumer preferences. By 2035, we assume that almost all cars sold in our focus markets will be connected.

Though 100 percent of vehicles will have basic connectivity by 2035, only a fraction are expected to have full connectivity in terms of V2X. This is mainly due to the elevated hardware costs that will make V2X a premium option in the passenger car segment.


Figure: Share of cars with V2X functionality for new vehicle sales in 2035 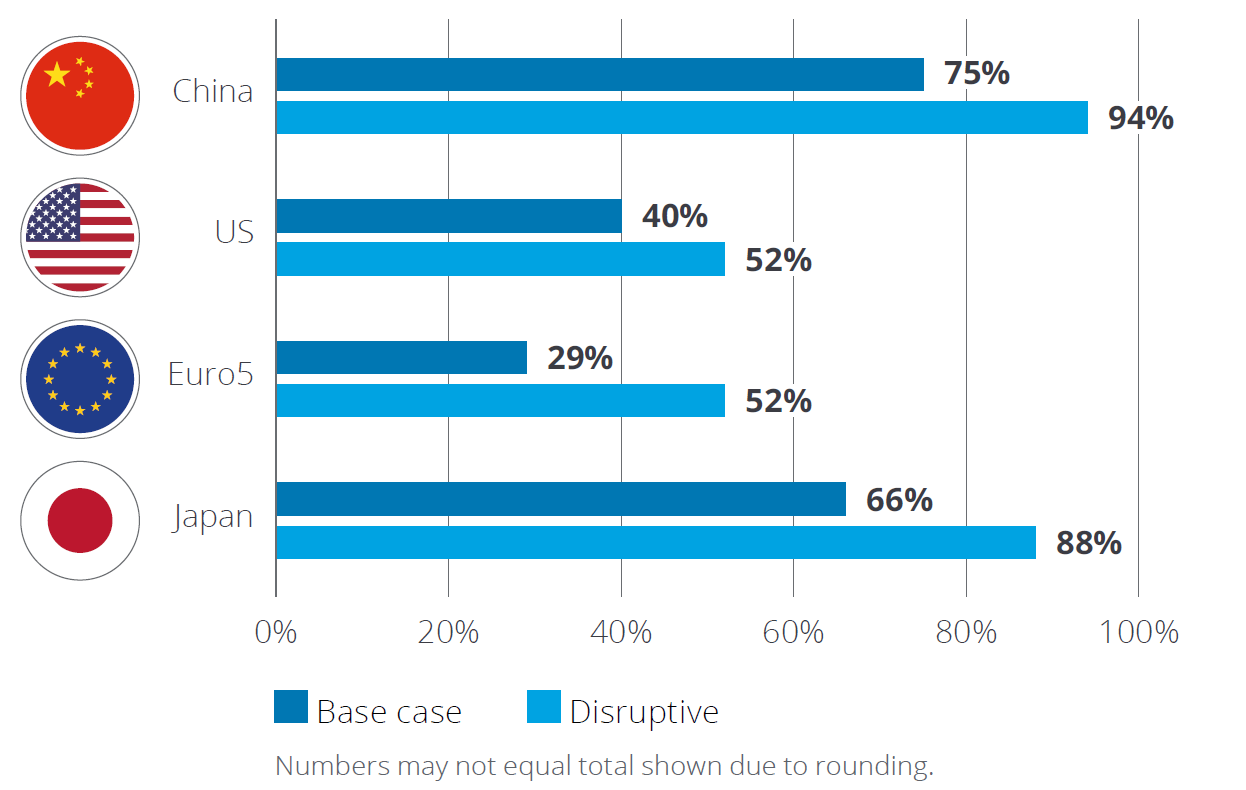 China
By 2035, it is expected that 75 percent of all new vehicles sold will have V2X functionality. Currently, already 76 percent of consumers in China feel that increased vehicle connectivity is beneficial, being most interested in receiving updates regarding traffic congestion and access to nearby parking.

United States
By 2035, it is expected that 40 percent of all newly sold vehicles will have V2X functionality. The United States is currently the most developed country for connected vehicle services and a pioneer in autonomous driving technology application.

Euro5
It is expected that by 2035, 29 percent of newly sold vehicles will have V2X functionality in Euro5. In general, Euro5 customers are more skeptical toward increasing connectivity with their vehicles: Only 36 percent of German consumers think increased connectivity would be beneficial.

In the future, Deloitte assumes that various drivetrains will coexist, with battery electric vehicles leading the way. The emergence of alternative drivetrains is mainly driven by decreasing production costs, regulation, charging infrastructure, and increasing performance.

China
China shows a large potential for alternative drivetrains, which is strongly driven by governmental initiatives such as resolute subsidies for new energy vehicles and fuel cell vehicles, as well as direct R&D investments.

United States
Even though the United States can be considered a pioneer in alternative drivetrain development, US consumers still mainly consider their likely next vehicles to be ICE-powered.

Shared mobility will increase the utilization per vehicle and shift ownership from private customers to fleet operators. Accelerated growth in mobility services is expected with the emergence of autonomous driving.

Figure: Utilization per vehicle measured in average kilometers driven per year in 2035

China
In China, the shared mobility trend has already emerged, making China the largest market globally in terms of user base and daily rides with shared mobility services.

United States
Large demand for shared mobility exists due to a high urbanization rate (82 percent) but is growing at a lower rate than in other markets.

Euro5
The growing level of urbanization, from 74 percent today to 84 percent in 2050, and the rise of regulatory pressure on ICEs, will drive growth and consumer demand of shared mobility.

Japan
The well-developed and accepted public transportation system in Japan presents a challenge to providers of shared mobility. Railroad transportation accounts for more than half of all passenger kilometers traveled.

The largest technological hurdle lies between level 3 and level 4 autonomous driving. Deloitte expects at least level 4 to be applied initially in specific use cases only. In a base-case, disruptive scenario, we can observe that most autonomous vehicles (level 4/5) will be sold in China in 2035. 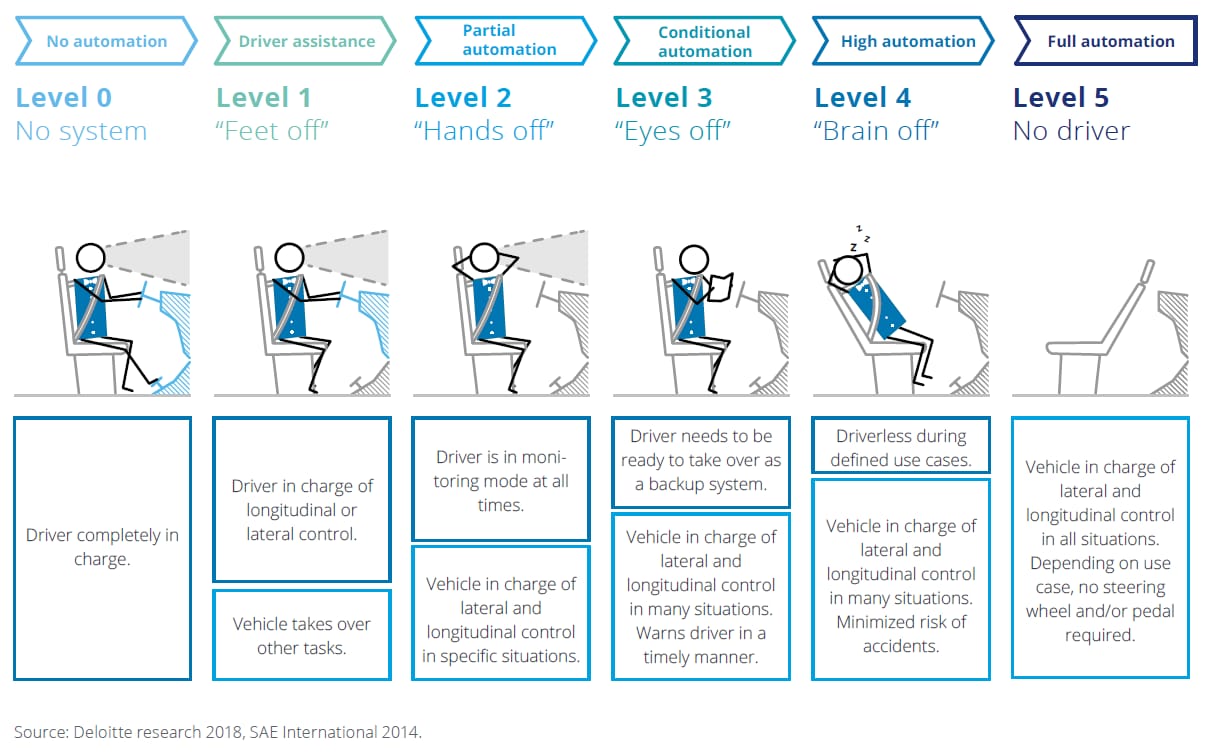 China
China is expected to have the largest growth potential, with 10 percent of ADAS level 4/5 cars of new car sales in a base case. The Chinese government shows high interest in making new technologies scalable and is willing to provide significant infrastructure investments for autonomous vehicles in urban areas.

United States
In a base case, we assume that 8 percent of all new vehicles in the United States will have ADAS level 4 or 5–limited to selected urban areas or dedicated routes. The United States currently has the most progressive environment for the use of autonomous vehicles.

Euro5
In Europe, we believe that 5 percent of new vehicle sales will offer level 4 or level 5 automation. However, in a disruptive scenario with favorable regulatory decisions, widespread social acceptance, and technological innovation, this could go as high as 43 percent.

Japan
Japan’s demographic structure, with a quarter of the population age 65 or older, makes autonomous driving a relevant use case to provide motorized mobility. With local OEMs, government, and startups pushing the technology development and deployment, we will see first fully autonomous application examples in the very near future.

We present a differentiated perspective of future industry effects based on two scenarios of trend emergence. Beyond that, we distinguish between two degrees of future OEM dominance over the competitive landscape, resulting in four possible future states in 2035. 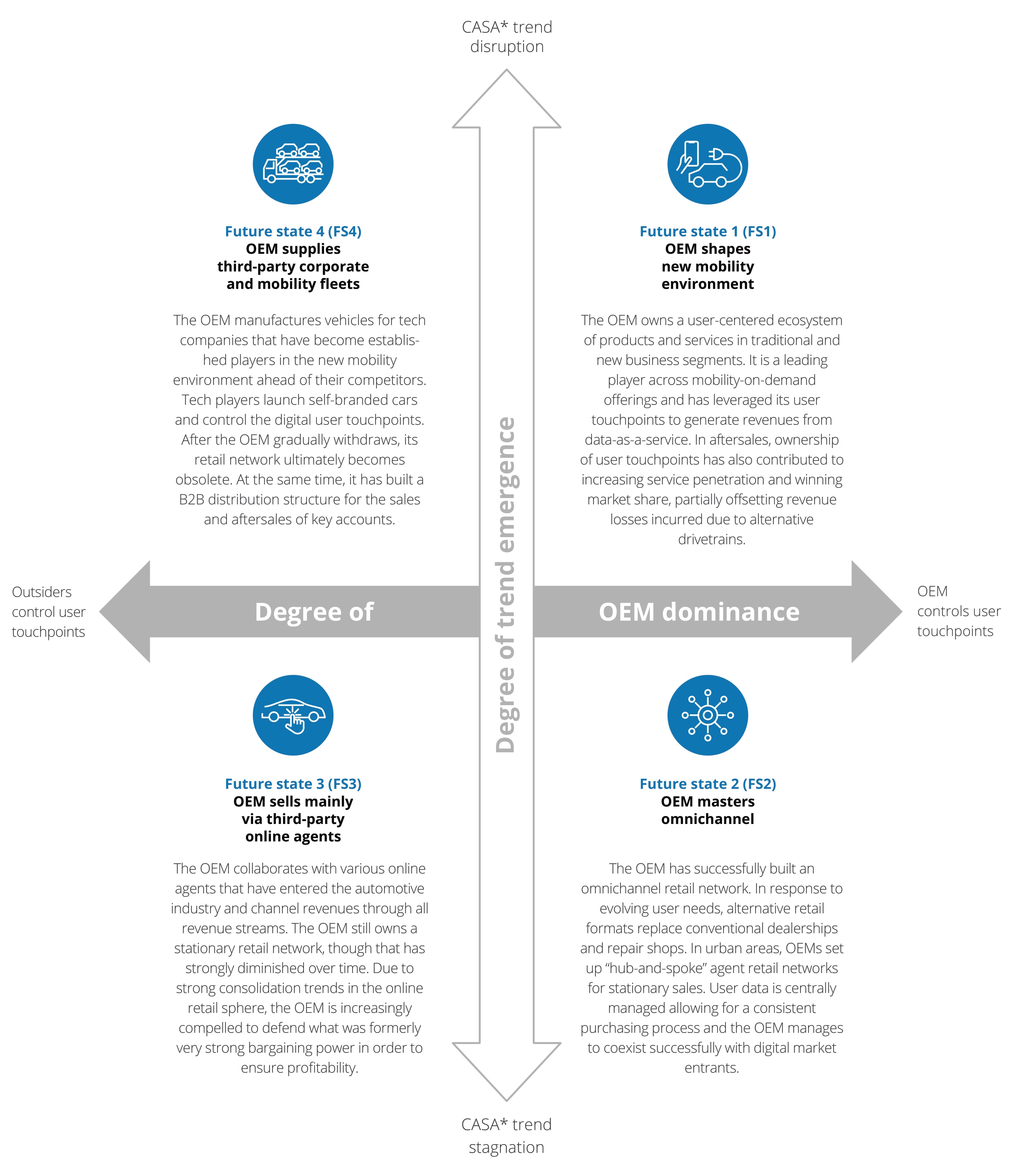 Where trend emergence is weak in CASA, new business segments such as Mobility as a Service and Car as a Platform will have less relevance and market potential. That said, we will still see vehicle sales shift further to fleet customers and private customers requesting omni-channel interaction during purchase and usage.

Where trend emergence is strong in CASA, OEMs are under even more pressure to transform if they want to prevail in a new mobility environment. There will be a strong consolidation and a “winner-take-all” market dynamic in new business segments at the user interface, along with strong challengers among the new “digital native” competitors.

In any future state, the OEM has to transform significantly to gain market share and defend against competition.

In order to realize significant future growth and profitability, OEMs need to succeed in China and require a comprehensive transformation of the current retail networks in all markets.

d) Mobility as a Service

Overall market potential of Mobility as a Service is strongly dependent on industry trends emergence.

e) Car as a Platform

In a base-case scenario, the proxy OEM experiences compound annual revenues growth of 3 percent from 2018 to 2035. From all markets considered, the market development in China will contribute the most to overall growth. Other markets show only moderate or minor positive growth.

1) Create transparency to make profound decisions. As an initial step, Deloitte recommends that OEMs create full transparency about how industry trends affect their business, today and in the future. We encourage OEMs to take our analysis of the proxy OEM and carefully adapt it to the specificities of their own business.

2) Ensure enablers are in place. Whether OEMs aim to participate in new business segments or not, in order to respond to technological advancements, the transformation of current products and processes is imperative. There are various levers that are needed and should be implemented, such as strategic partnerships and acquisitions, connected infrastructure and platforms.

3) Ensure omni-channel capability. OEMs have to significantly transform their current stationary sales and aftersales network regardless of the future state scenario. This includes various fundamental sales transformation changes, such as reducing scale and assets in the traditional retail network and introducing new formats and digital experiences to the retail mix.

Enhance toughness out of the trough, advices to auto industry on supply chain management