As Salaries Grow, Contributions Drop in the Czech Republic

Prague, 24 October 2017 – The higher the salary a Czech employee earns, the lower the percentage of their salary that they contribute to social security*. Compared to other countries, the percentage of the minimal and average salaries the employee retains is one of the lowest in net terms. However, in comparing the net salary to the gross salary of EUR 100,000 a year (approximately CZK 217,000 a month), the Czech Republic rises in the ranking, having the ninth highest net salary in Europe. These are the results of the Social Security Survey (PDF) conducted by Deloitte, in which 30 European countries participated**. Furthermore, the survey showed that the Czech Republic has one of the lowest minimal and average gross salaries. In European terms, an increase in the minimal salary is visible.

“In this country, social security contributions swallow up almost half of the gross salary. The other Visegrad Four countries are in a similar position. The group jointly makes the highest combined contributions in among the countries that have stated in the survey that they have minimal and average salaries. The historical links among the countries are clear,” says Mária Minárová, a manager at Deloitte’s tax function.

Along with Romania and Bulgaria, the Czech Republic has the lowest minimal salary among the countries being compared. The highest minimal salary is in Norway, Denmark and Luxembourg. The Czech Republic also has one of the lowest average salaries. By far the highest average salary is in Norway, followed, by a large margin, by Luxembourg, Finland and Denmark. 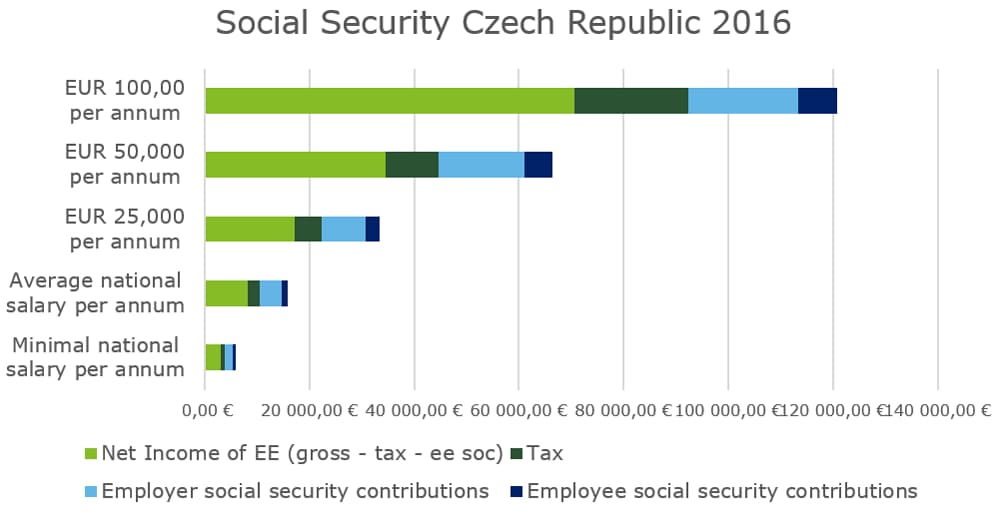 Among others, the paper provides a comparison of three sample income groups. Each group compares individual countries based on how much of the gross salary the employee has left after the compulsory contributions have been subtracted.

Gross salary of EUR 25,000 a year (approximately CZK 54,000 a month)
In this category, the highest net salary is earned by the Swiss, while the lowest by Slovenians. Czechs do not make much more either as the Czech Republic takes 25th place out of 30 in this category.

Gross salary of EUR 50,000 a year (approximately CZK 108,000 a month)
As the salary grows, the amount of contributions drops in the Czech Republic. It moves up 10 places, taking 15th place right in the middle of the list. The highest amount is left to employees in Bulgaria, Switzerland, Cyprus, Estonia and Malta. The lowest net salary is earned by Slovenians, Croats, Germans and Belgians.

Gross salary of EUR 100,000 a year (approximately CZK 217,000 a month)
Conditions in the Czech Republic are the best for the highest earners, with Czechs taking 9th place. Having made social security contributions, the highest net salary is earned by Bulgarians, Estonians, the Swiss, Lithuanians and Romanians. The lowest is earned by employees in Belgium, Slovenia, Italy and Croatia.

Maternity, paternity and parental leave
Maternity allowances protect the mother from losing income in the months immediately before and after giving birth, when her ability to work is reduced or fully excluded. 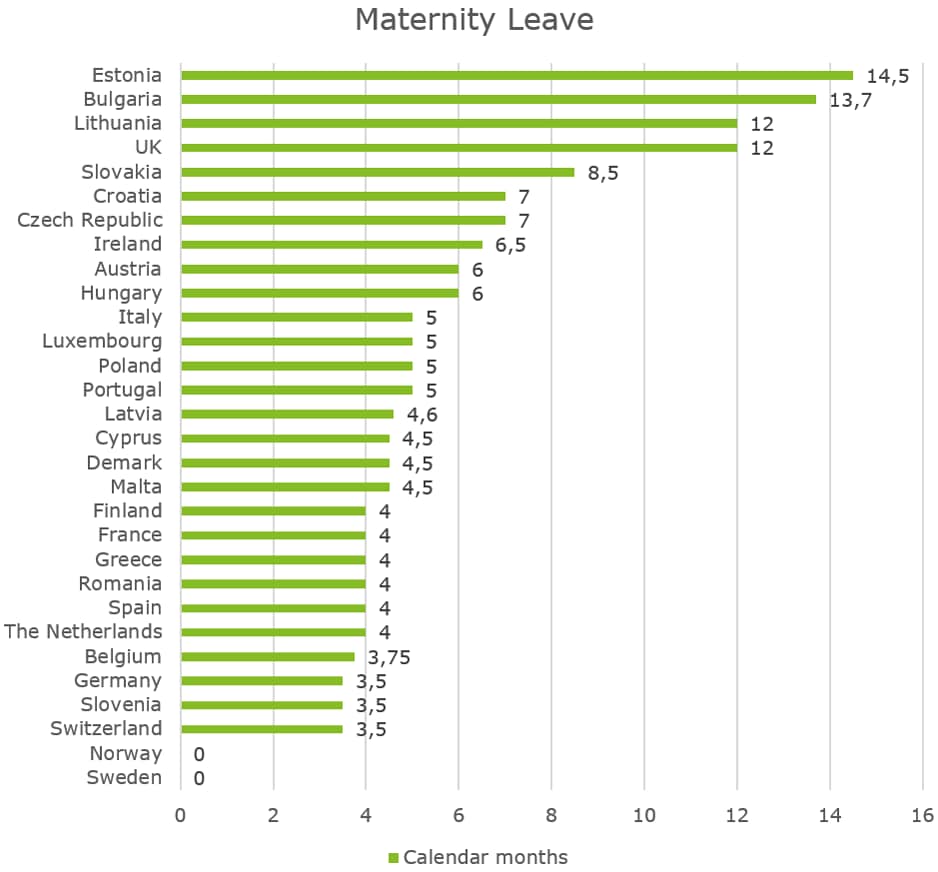 With the arrival of a new child, certain countries make it possible for fathers to go on paternity leave. The longest paternity leave can be taken in Slovenia and Finland (70 and 54 days, respectively), while typically the number is 10-15 days.

In the Czech Republic, new legislation will come into force in February 2018, allowing fathers to take one week of paternity leave during which they will also be entitled to allowances.

As a rule, maternity leave is followed by parental leave. Nevertheless, this does not necessarily apply in all countries. The length of parental leave most frequently amounts to around three years; however, it is not always coupled with a state contribution as in the Czech Republic. In certain countries, one of the parents, or both, have the guaranteed option of staying with the child at home even for a long time after the birth; nevertheless, they do not receive any income during this period (e.g. Estonia and Malta).

* Social security costs consist of compulsory contributions to pension, health and sickness insurance and the state employment policy. As such, they include all contributions made from the salary except for tax contributions. This is based on the local legislation of the given country, with individual systems not aligned at the European level. The survey does not account for factors such as the purchasing power parity or various living costs in the given country.

Contacts for the Media

Jana Morávková is part of the external communication team. In the past she has led the Česko v datech (Czech in Data) project and has vast editorial and PR experience. She focused on healthcare, real ... More