Music has left its mark on me – in the best way possible.

Silvia, Studio Lead at Deloitte Digital, talks about her enthusiasm for punk music and how this genre influenced her career.

Hi, I’m Silvia, Studio Lead at Deloitte Digital, and I’ve been passionate about punk music since I was very young. Punk remains a big influence on how I work and, as a creative, write today. Punk music was even played at my daughter's church baptism. In this blog post I’m happy to tell you how I discovered my love for punk music, and which famous musicians I have already met. 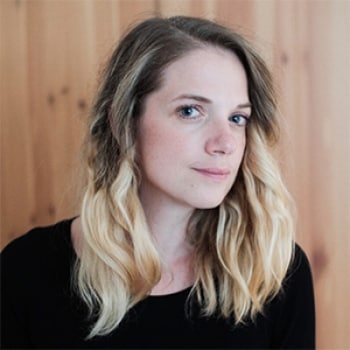 Music has left its mark on me – in the best way possible.

Your passion is punk music. How did you develop a love for the genre?
From an early age there was a lot of music in my life, despite certain restrictions. Growing up in Communist Romania, music was a black-market good. My parents’ friends would somehow get bootlegs from abroad; we’re talking VHS tapes, records, 8-tracks, and cassettes. My parents would dance in our living room to Phil Collins, James Taylor, and Billy Joel – music I still love to this day. Later on, after the fall of Communism, my uncle actually became one of the most well-known sound engineers and concert organizers in Romania, so I basically grew up backstage. He had a huge influence on my life and he was the source of a lot of memorable stories – I remember he once brought home some Manuka honey that Sting left behind after a concert. He loved rock music, and he actually organized the first concert I ever went to – Metallica, in Bucharest, in 1999. My uncle unfortunately passed away before Covid happened; even lying in his hospital bed, during his final days, he was working, preparing for Bryan Adam’s concert in 2019. He was so passionate about the music industry; we always say this pandemic would’ve broken his heart. I don’t think he would have been able to cope with the damage caused to the live music scene over the last few years.

Why is punk music, of all music genres, your favorite? What excites you so much about it?
As I matured and started being interested in boys, I felt particularly attracted to boys in bands. Not an unusual phenomenon, I guess – a boy with a guitar simply has a certain allure. My first very serious relationship was with the guitar player of a punk band that’s still pretty famous in Romania (E.M.I.L. – look them up!), and I have to say being in this world definitely left its mark on me, in a really good way. He brought a lot of music into my life, and also a certain lifestyle that’s probably the best you can have as a youth – not so much drugs and rock 'n' roll, but rather incredible friendships, sleepless nights, and a lot of music. The punk community in Romania wasn’t huge back then, but no matter the size, there is a certain kinship in the community. Punk is not just about showing the middle finger to the establishment – it’s also about fun, laughter, love, pain, energy and a lot of singing along to Rancid’s Ruby Soho on bar tables. Those were my formative years, so I grew up with Gwen Stefani as my absolute fashion icon, Green Day as my emotional go-to soundtrack, Alkaline Trio as my angsty persona, and the Dropkick Murphys as my dance anthem.

Do you combine your interest in music with your work at Deloitte? For example, do you listen to punk music at work as a source of motivation?
Here’s a funny fact: I actually became a writer, which eventually brought me to Deloitte, because of my music connection. One of our friends who was a guitarist in a hardcore band (and still is, actually – here’s another Romanian band you can check out: Coma) was working in advertising, and he asked me if I’d be interested in a copywriting internship. At that time, I was in film school, studying directing, but I already knew that screenwriting was my favorite part of the curriculum. So I said yes, and after only two months they offered me a job – and that was the start of my career. Punk remains a big influence on how I work and write today. At Deloitte, we have a very science-based approach to creativity, which basically says creativity needs to have a reason, that you should strive for meaningful change, and that you should celebrate function over form. Punk is also a form of protest against the shallowness that so often permeates our world. In my writing, punk has taught me to stay away from stylistic cliches. And yes, listening to punk while I work actually helps me concentrate a lot. My go-to at the moment is the band Face to Face.

You have already met many musicians. What was an unforgettable experience for you?
There are so many I could talk about, but I have to mention a Green Day concert in Budapest in ‘95. At Green Day concerts, the singer, Billie Joe Armstrong, brings someone from the audience up on stage, gets them to play an Operation Ivy song with the band, and then gifts them his guitar. Our group of friends went to that concert with one mission: getting Stoi, another friend of mine who had dreamt of this his entire life, THE guitar. To cut a long and very epic story short, we did it. Stoi got to play with Green Day on stage and we brought the guitar home to Bucharest. Our friends who couldn’t join us greeted us at the train station with a red carpet. I just might have a Green Day tattoo somewhere on my body to commemorate that night.

Who is your favorite punk musician and why?
I love Gwen Stefani because she was the first female I really looked up to – her voice is amazing, she’s an insane songwriter, and she is also just a very cool lady. I’m not going to discuss whether she’s softened up in recent years – to me, she will always be the image of perfection I had back then. If I had to choose a close second it would be Greg Graffin, the singer of Bad Religion. He is an amazing singer, a true punk icon, and an incredibly intelligent individual – he is also a professor of evolutionary biology at Cornell University, a lecturer, and writer. I was lucky enough to meet him; one of the very few times I was almost speechless in my life.

Which songs are among your unbeatable favorites? What feeling do they trigger in you?
It’s a tough choice, but I’m going to pick the three that have a particular, lasting meaning in my life. Sweetness by Jimmy Eat World is an absolute classic, an all-time favorite of my boyfriend and mine. It’s a “jump around and forget yourself” kind of song. For My Family by Agnostic Front is a bit on the hardcore side of my music preferences, but it’s such a powerful song, and it reminds me of the strong bonds music can create, where friends become family, and there is nothing more important in this life than family. Ask my 11-year-old, she’ll tell you. We are team “familia por vida”. Lastly – and this one’s a softie, but super important to me – Sugar Ray’s Under the Sun. This is the song my friends and I all sing along to wildly at four in the morning as we drunkenly profess our love for each other. It was the anthem of our seaside summers.

At your daughter’s baptism, you played punk music in the church. How did this happen and what were the reactions of those present?
My daughter is named after one of my favorite songs, For Fiona by No Use for a Name. We really wanted to have the song played at her baptism, but it’s not exactly customary to play punk music in church. So we asked Nico, one of our friends who is an amazing musician, to take the song and adapt it into a simple piano version. Using this, the organ player was able to play the melody during the service. It was really an amazing moment, and we all cried like babies – except for Fiona; I think she was sleeping. The song was originally written by the band’s singer, Tony Sly, for his first daughter – we sent him a video of the baptism and both he and his wife wrote us back to thank us, saying they had shared it with their own Fiona. While Tony has since passed, we will always consider him Fiona’s spiritual godfather – and his music will always have a special place in all our hearts.

Learn more about our team members and their various passions.

Become part of our vibrant team.