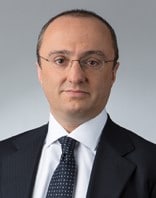 Gianmarco Monsellato, HEC graduate and French attorney is Deloitte Global Tax & Legal Leader for Clients & Industries and a member of both Global Tax & Legal Executive and Global Client & Industry Council. He is also Deloitte EU Tax Public Policy Leader, in contact with OECD and European Institutions. He was Taj’s CEO, a leading French tax and law firm now part of Deloitte, from 2004 to 2016.

Gianmarco advises and defends major client on international tax matters. He is considered as a thought leader on tax governance. He has been consulted several times by the French government. He published books and articles in France, Japan, the United Kingdom, the United States and Switzerland.

He is the Chairman of the French tax committee of the International Chamber of Commerce. He is a board member of Fedora, the European Federation of Opera and Ballet Houses and Chairman of the Friends of Aubusson Tapestries.

He received in 2013 the United Nations’ Women Empowerment Principles Award saluting his exceptional championship of gender diversity in the work place.