Canada’s economy appears to be growing nicely due to rising levels of employment. However, NAFTA uncertainty and high levels of household debt could slow the economy. The United States’ decision to lower the corporate tax rate could also make Canada a less attractive business location.

Of late, Canada’s economy has been performing well, with its 3 percent growth in 2017 leading the G-7.1 The unemployment rate hit 5.8 percent in December, and has been around that mark ever since—a rate last seen only briefly in 2007, and before that, not for several decades (see figure 1). A couple of years ago, many Canadians were concerned about labor markets; today, not so much. Unemployment is, in fact, near the lowest level since the mid-70s. Canada seems pretty close to full employment, although there may be pockets of slack remaining even now.

This means that there isn’t much questioning about the economic recovery—it’s here and it’s real. The Bank of Canada switched to tightening mode last year and is likely to be heavily influenced by the Fed in the future, as is to be expected. But two factors may moderate the bank’s response:

Of course, Canada’s economy is heavily reliant on the fate of the US economy—something Canadian policymakers know quite well. Official views about the US economy appear to be a bit modest. The Bank of Canada forecasts US GDP to grow 2.7 percent in 2018.3 The Parliamentary Budget Officer forecasts US GDP to rise 2.8 percent in 2018 and just 2.4 percent in 2019.4 That’s pretty low compared to the 3.3 percent forecast by the US Congressional Budget Office,5 although only a bit lower than the current Deloitte US forecast (2.9 percent). The very large US fiscal stimulus in the pipeline points to an upside risk for near-term Canadian growth. If the US economy outperforms the Bank of Canada’s relatively modest forecast when the economy is at full employment, the bank may find itself scrambling to prevent inflation from picking up.

While enthusiastic people on social media dumped buckets of ice water on themselves and challenged their friends to do the same, Canada’s tax authorities face a different challenge. The United States—Canada’s companion and competitor—just passed a significant reduction of the corporate tax rate. Before the new legislation took effect, the US federal statutory rate was 35 percent, much higher than Canada’s 15 percent. Provincial corporate taxes might have been a bit higher (11.5–16.0 percent) compared to US state corporate tax rates (0–12 percent),6 but the big difference in federal rates may have looked attractive to multinationals considering their North American options.

Some Canadian analysts are now concerned that the substantial reduction in the US marginal tax rate to 21 percent (along with some of the other features of the new US tax system) will make Canada less competitive as a business location.7 Of course, everybody recognizes that taxes are only one element feeding into the location decisions of organizations. Canada has some significant advantages besides taxes. But taxes are definitely part of the equation. For companies that might otherwise have seen an advantage in Canada, the reduction of the US tax rate by 14 percentage points might just change some decisions.

Figure 2 shows the importance of FDI for Canadian investment. FDI flows from abroad have typically been about 10 percent of total business fixed investment. The higher years coincide with large inflows in the energy industry. In 2013, for example, almost one-third of FDI was in energy and mining, while the relatively low FDI in 2017 was associated with a substantial decline in FDI in energy and mining. It seems unlikely that the energy and mining flows would be affected much by corporate taxes—the resources are in Canada, and multinational energy companies have little choice in location. This suggests that the impact on Canadian investment from a decline in FDI may be a bit more modest than it might appear at first.

Many Canadian business representatives are already ramping up calls for major tax reform in Canada to attempt to restore some of the lost competitiveness.8 Despite this, the 2018 budget contained no major tax initiatives or response to this potential problem. For now, the government appears to prefer to raise spending rather than use growing tax revenues to finance a major tax reduction. Calls for corporate tax reform will probably continue, and intensify, over the coming year. A big question for the 2019 budget will likely be whether the government will feel a need to respond.

Canadian voters knew the budgetary priorities of the Liberals when they voted in 2015. The Liberals bucked the trend—and conventional wisdom—by promising some additional spending, even if that pushed up the deficit. That’s what the government’s first two budgets did.9 And that’s what the 2018 budget did as well.

Despite the additional spending, Canada’s debt-to-GDP ratio hasn’t deteriorated. In fact, it’s improved. Figure 3 shows how Canada’s budget estimators have brought down their deficit projections over the three budgets of the current government. This doesn’t look like a country that is significantly relaxing its careful management of federal debt.

Media accounts noted that, in the 2018 budget, the government focused on the gender impact of federal policies.10 Indeed, the budget devoted a full chapter to an analysis of gender differences in the economy and government policies to address the problem. The government also put some money into equalizing pay for government workers. While there’s a lot of merit in the government’s desire to drive inclusive growth, future government policy may be more focused on the country’s competitiveness problems. Finance Minister Bill Moreau recently said, “Job 1 on the centre of my desk for the next six months is going to be about competitiveness in Canada.”11 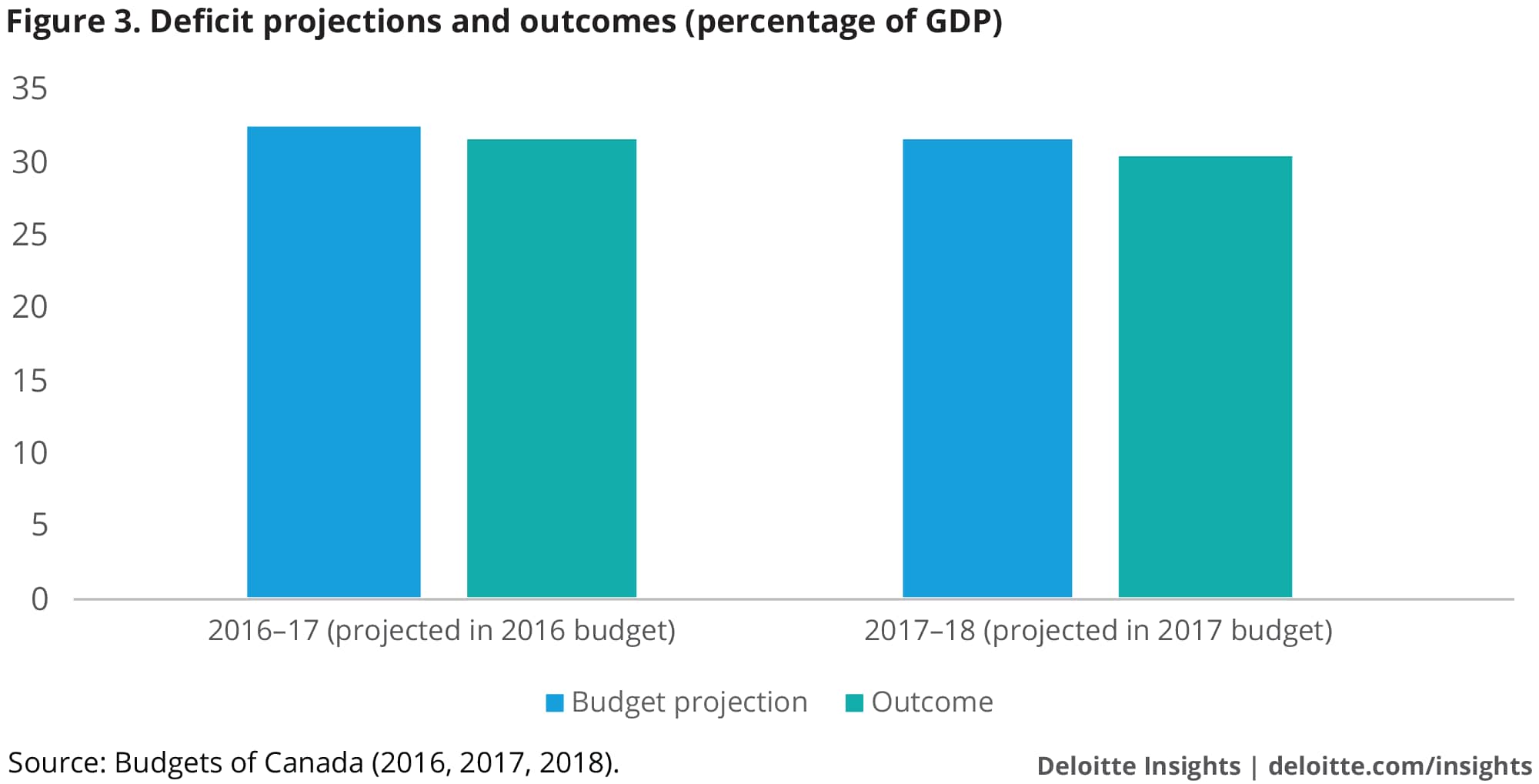 Federal spending increases have, in fact, been moderate. Just compare the CAD 7.8 billion policy increase in the 2018 budget with the USD 300 billion increase in spending authorized in the US Budget Act over the next two years.12 That’s why Canada’s debt-to-GDP ratio could remain stable at around 30 percent in the government’s forecasts, while the US Congressional Budget Office sees the US debt-to-GDP ratio rising to almost 100 percent.13 Evidently, even the big spenders in Canada are still modest compared to their counterparts in the United States.

Dr. Daniel Bachman is a senior manager with Deloitte Services LP and is located in Arlington.

Canada: On good footing, for now has been saved

Canada: On good footing, for now has been removed