Economic indicators are looking up, setting the stage for continued moderate growth in the remainder of 2019 and in 2020. Like other economies, Canada remains susceptible to external shocks, especially political and trade risks.

The Canadian economy stalled in late-2018 and the weakness has carried over into this year. However, recent economic data has been decidedly encouraging and indicative of an economy coming out of hibernation. Nonetheless, past weakness will restrain growth this year to a modest 1.4 percent, before an acceleration to 1.7 percent in 2020 (figure 1). While subpar, the pace should be enough to keep the Bank of Canada on the sidelines and the Canadian dollar averaging around 1.33 to the US dollar. 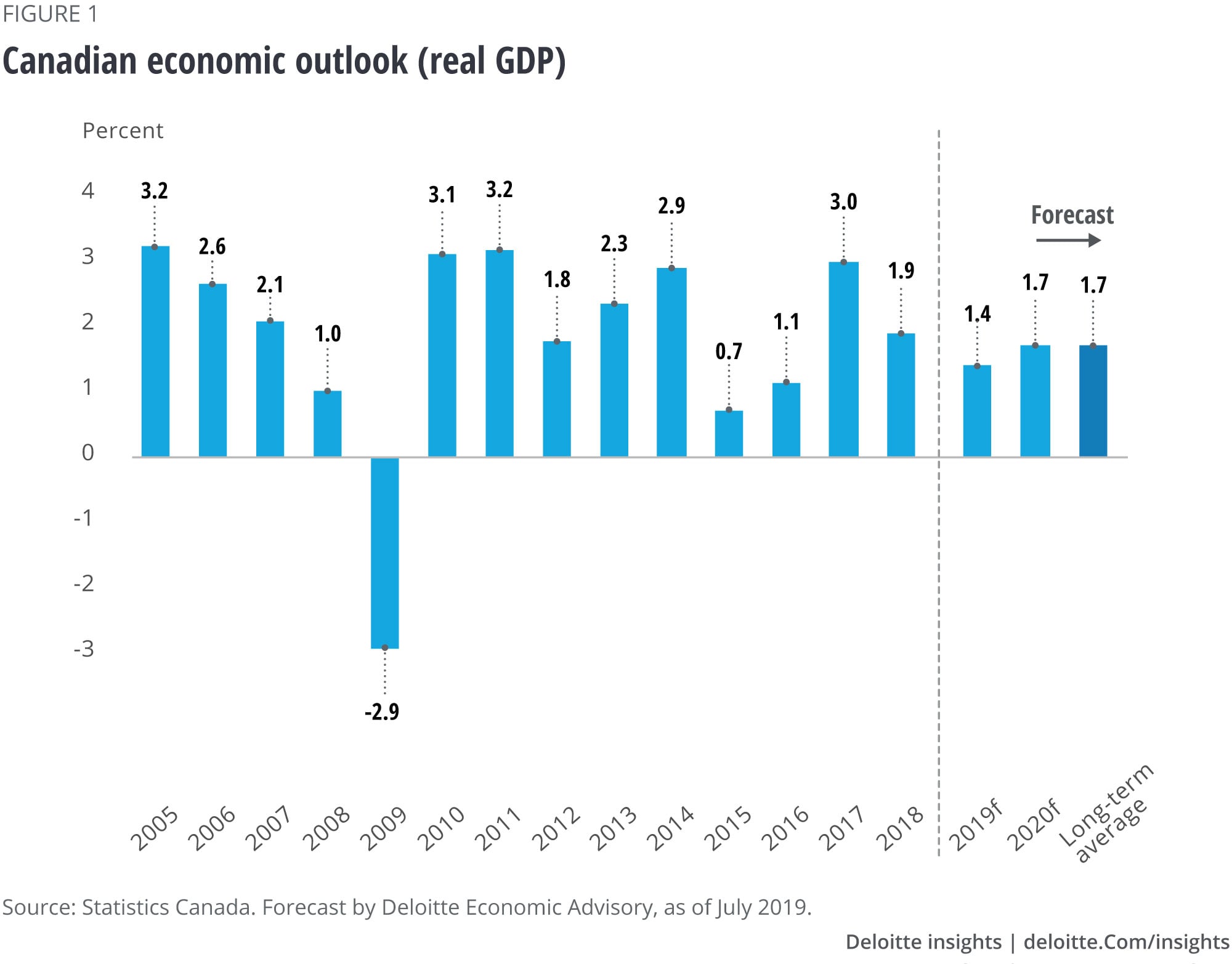 Debt-laden Canadian households will keep their wallets open, but spending growth will only be moderate. Consumption will be shored up by some much-needed stability in real estate. Green shoots have begun to appear across some hard-hit housing markets. Meanwhile, the long-awaited rotation in Canada’s economic drivers toward exports and investment should materialize, but its pace will be limited by elevated uncertainty and subdued commodity prices related to the slowdown in the global economy.

The modest pace of growth in the global and Canadian economies make them more vulnerable to economic shocks that are not built into the baseline projections. This is especially true in the later stages of the business cycle, such as now. As such, it is important to be mindful of the risks to the outlook. Regrettably, the biggest risks currently are political in nature, making them difficult to anticipate. However, this does not diminish the importance of staying informed nor dissuade from planning and making core investments.

Canadian outlook: Easing out of hibernation

The Canadian economy stalled in the last quarter of 2018 with a gain of just 0.3 percent annualized (downwardly revised from 0.4 percent), and growth was largely absent in the first quarter of 2019 (0.4 percent annualized). While the headlines were nearly identical, the details of Statistics Canada’s latest quarterly GDP report revealed the domestic economy was seeing signs of a near-term rebound:

In fact, if not for the drag from net exports, the economy would have grown by a full percentage point faster. The healing narrative was further reinforced by a robust gain in final domestic demand after two consecutive quarterly declines. A large improvement in Canadian terms-of-trade has also led to a rebound in real domestic income, boosting Canadians’ purchasing power and boding well for future economic growth.

So, the core message is that while the Canadian economy stalled in late-2018 and early-2019, the details set the stage for a better performance ahead. A broad acceleration in March GDP by industry, to a robust 0.5 percent, made for a strong hand-off into the second quarter. The healthy starting point, robust growth in April, and improving economic indicators are setting the stage for an acceleration, with second-quarter growth tracking above 2 percent at this point.

The pace would be even stronger if not for expected drag from inventory investment and government spending. Combined, these categories contributed 1.5 percentage points to growth over Q4 and Q1, and some giveback is warranted, particularly given the tighter fiscal policy at the provincial level. Despite the decline in borrowing costs, economic growth will continue to be restrained by an overleveraged consumer, with debt-to-income ratios at dangerously high levels.

Despite the probable pickup in the second quarter and the rest of 2019, the weak start to the year means annual growth will likely come in at only 1.4 percent. Growth should improve to 1.7 percent in 2020, a pace consistent with the long-term potential of the Canadian economy, but the outlook is fraught with both domestic and international risks.

Provincial outlook: Growth to pick up by 2020 across most regions

The dynamic of slowing growth this year before a modest pickup in 2020 will be shared by most provinces. However, the amplitude will vary substantially across the country. The slowdown will be most acute in Alberta, where mandated production cuts and elevated unemployment restrained growth to near stall speed after topping 2 percent last year. A rebound in investment related to higher oil prices and a recovering housing market should enable the provincial economy to return to healthy growth next year (figure 2). 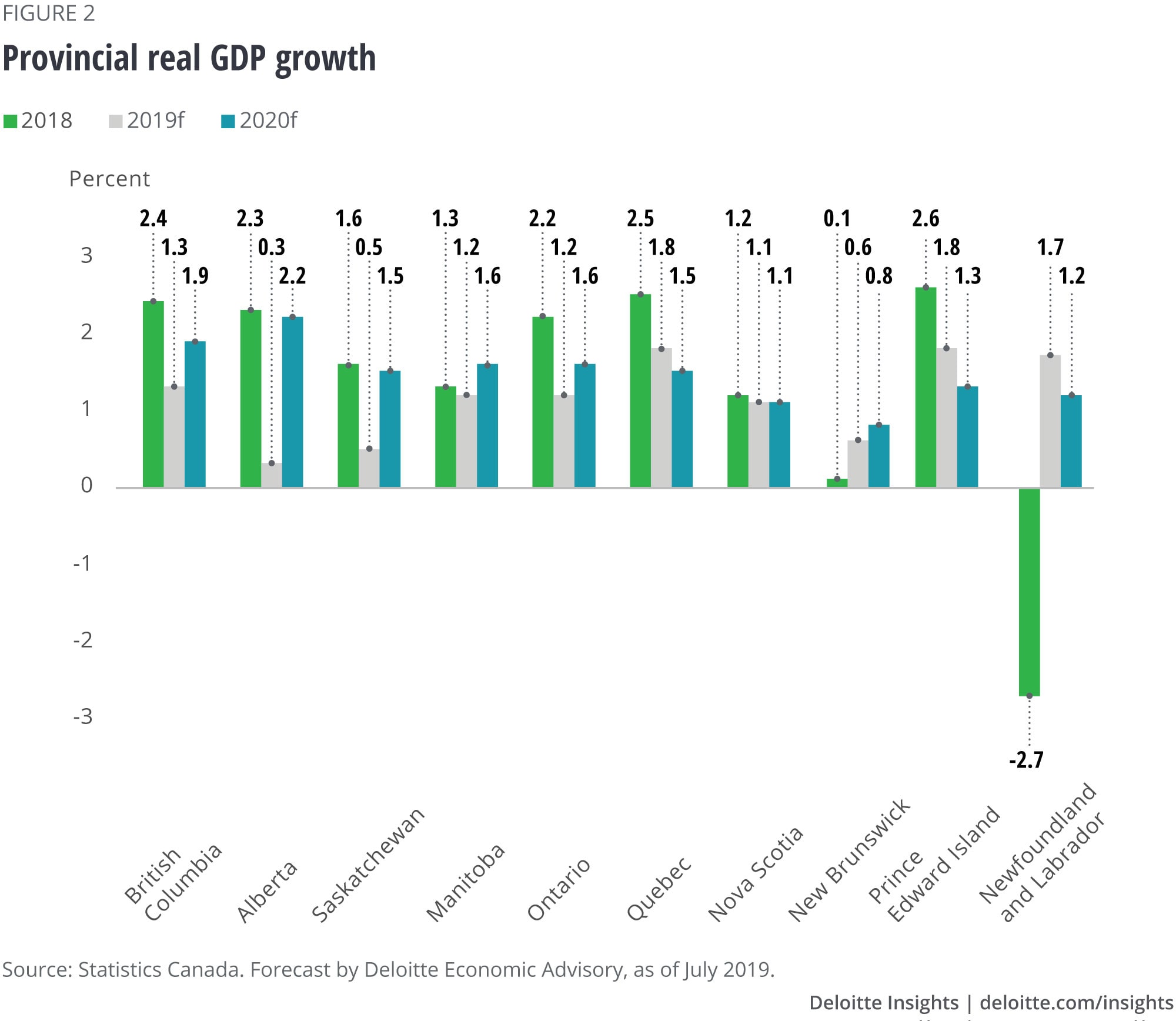 Dependence on global commodity markets will limit growth in Saskatchewan, as Chinese restrictions on agricultural imports (canola and meat) from Canada will reduce growth by over one percentage point to about half a point. Growth is expected to then accelerate to 1.5 percent as unemployment declines and consumers open up their wallets. Growth in Ontario and British Columbia will be nearly halved this year, to 1.2 percent and 1.3 percent, respectively, on housing-market woes and weak exports. Healing housing markets and a modest rebound in exports should boost the pace thereafter, but at less than 2 percent, growth will be modest by historical standards.

There will be a slight deceleration of economic growth in Quebec and Prince Edward Island. Coming off an unsustainably strong growth spurt, the manufacturing-heavy Quebec economy was bound to slow. Still, after expanding by 2.5 percent last year, growth will slow to just below 2 percent as a red-hot housing market and public sector investment offset some of the drag from exports, and eventually return closer to its equilibrium growth rate below 1.5 percent in 2020. Growth in Prince Edward Island will be supported by a broad range of factors, with strong housing market conditions and healthy tourism activity providing an outsized boost. After a strong performance in 2018, when the island’s economy expanded by 2.5 percent, the pace of growth will decelerate below 2 percent this year and next, converging toward its long-term potential.

The remaining provinces should buck the national trend of deceleration this year, with growth in Manitoba and Nova Scotia likely to remain steady. This is primarily because growth has already converged to its long-term potential in both provinces, and neither is particularly exposed to global trade. As such, Manitoba’s economy should continue along its growth trajectory of mid-1 percent, while Nova Scotia’s growth is expected to remain a touch above 1 percent.

The rapidly evolving economic and financial environment will likely have a considerable impact on Canadian businesses and governments.

Global and Canadian economies have continued to slow since last year, becoming increasingly susceptible to negative shocks. The vulnerability is being exacerbated by a global business cycle that is getting long in the tooth, with the US expansion already record-setting. Financial market volatility has increased amid worries that political risks, such as an escalation in trade tensions, could trigger a downturn, prompting signals from central banks that they stand ready to cut rates if necessary.

The heightened political risks are muddying the crystal balls of economic forecasters, but the base case outlook for the global economy appears to be one of continued economic growth, albeit at a modest rate of expansion. In Canada, economic growth will be subpar this year, but then accelerate to its sustainable pace of 1.7 percent. While average growth is not a bad outcome, it will be lower than in the past. As such, many businesses will feel they are working harder to get ahead.

Cyclical industries will likely be hampered by weaker global demand growth. Commodity prices could rise if financial market pessimism proves unwarranted, but it will be a challenging environment for mining, and investment in the sector will likely be weak. Manufacturing in North America will have to come to terms with weaker US growth, but could benefit from onshoring production closer to customers. Real estate and construction activity in Canada should stabilize after declines in 2018 and early-2019. Service industries should be more resilient, but their profit growth is likely to moderate.

In this environment of weaker sales growth, companies will be looking at constraining their expenses and finding efficiencies. Tight labour markets should motivate investment in capital and technology. Global competition will intensify as companies vie for their share of a slower-growing income pie. Governments will have limited fiscal capacity, necessitating tough choices about priorities and delivery of services.

Challenging times also create opportunities. Slower economic growth can be a powerful catalyst for businesses and governments to implement reforms and boost competitiveness. Any downturn in the business cycle is unlikely to be long-lived; economic contractions are a temporary valley that must be navigated across. Opportunities await companies that are better positioned to ride out the cycle.

While developments in the business cycle will likely top headlines, it is also important to recognize that structural forces are changing the nature of the economy. For example, the impact of aging demographics is profoundly shaping labour market conditions. Climate change is contributing to the increased frequency of extreme climatic events, such as floods, wildfires, and hurricanes. A digital revolution is disrupting existing business models and unlocking incredible possibilities. These forces will remain in play and are likely to intensify in 2020.

In summary, the economic environment, while characterized by enormous risks, also offers plentiful opportunities for Canadian organizations, particularly those that stay informed and ready to adapt to evolving conditions. 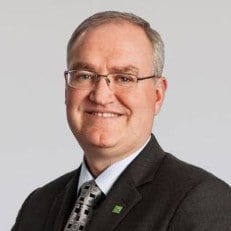