After four quarters of plus-2.5 percent growth, Canadian economists have taken their debate over a recession off the table. But, will new trade tactics from the U.S. impact performance for key industries in Canada?

A couple of years ago, Canadian economists were debating just what the word “recession” meant—and whether they could apply that word to the Canadian economy. It’s the kind of debate most people didn’t want to hear, since it indicated just how weak the economy was. The Canadian economy has perked up over the past year. Debates about the meaning of “recession” don’t seem very relevant after four quarters of plus-2.5 percent growth—including a 4.5 percent second quarter.

The Bank of Canada certainly isn’t thinking of weakness. In September, the bank raised the overnight rate to 1.0 percent, the second hike since July. The bank’s statement continues to emphasize that “future monetary policy decisions are not predetermined,” but the direction of policy is now clear.1

Meanwhile, inflation remains low. Governor Stephen Poloz recently discussed the bank’s approach to policy in a speech in Newfoundland.2 Notably, Governor Poloz did not go as far as US Federal Reserve Chair Janet Yellen, who was willing to admit that the Fed’s inflation models may not be working.3 Evidently, Bank of Canada officials are still willing to rely on traditional inflation models. With the unemployment rate coming down, however, the question of what constitutes full employment in Canada will begin to become of primary importance for monetary policy.

Figure 1 shows the regional split. It’s remarkable that Alberta, with a labor market about one-third the size of Ontario’s was able to match it in job creation for several years. The drop in oil prices in late 2014 reversed the position of the two provinces. And, just as economists expected at the time, Ontario’s employment growth accelerated, while Alberta lost jobs. But stable oil prices have brought some production and exploration back, and employment in the sector—while still about 12,000 below the peak—is once again growing. 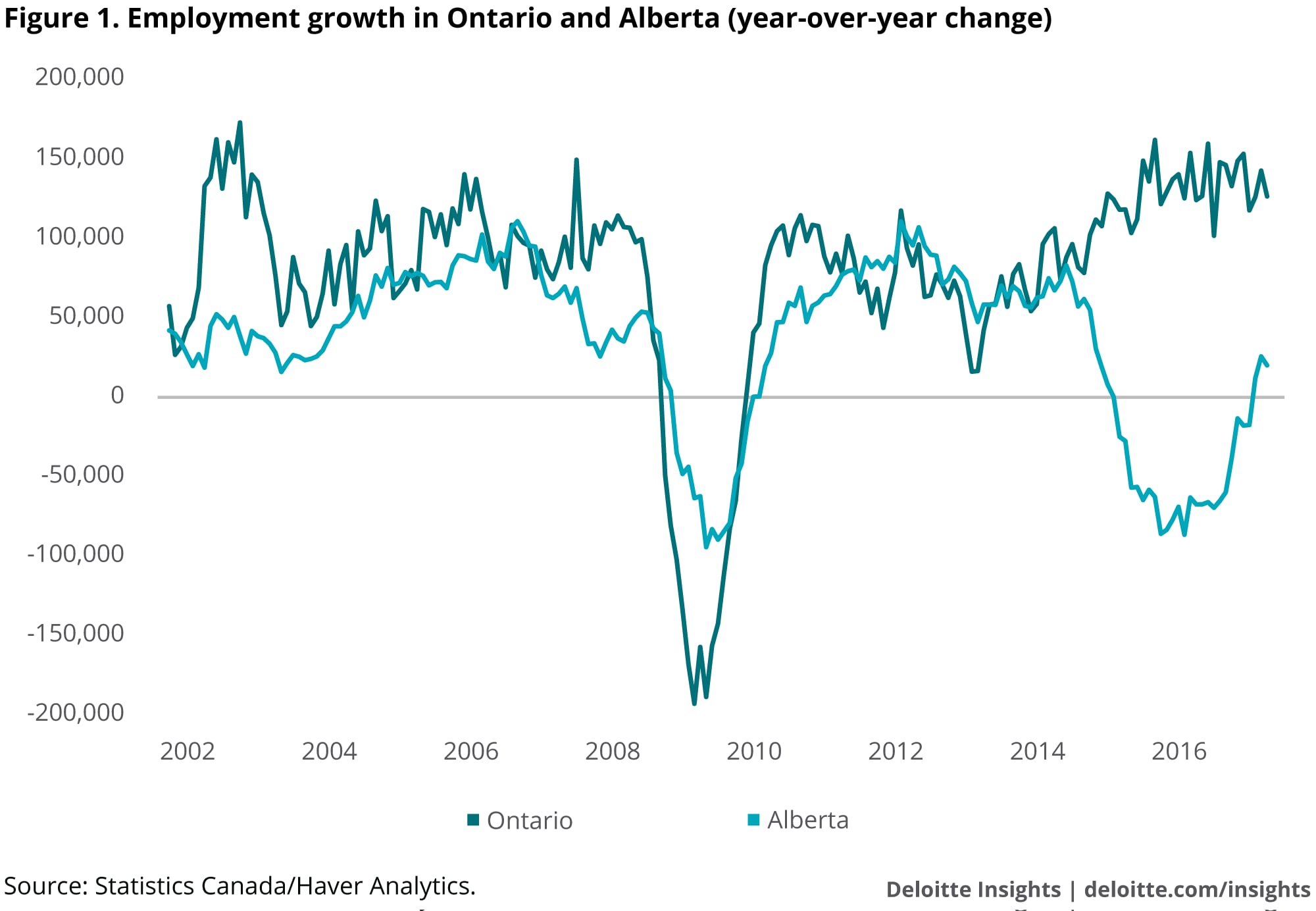 Two years ago, Canadians had some reason to be concerned. The sharp decline in oil prices at the end of 2014 was bad for Canada’s energy exports, to be sure. But energy’s pain should have been offset by manufacturing’s gain, as the fall in the loonie translated into greater competitiveness and the recovery of manufacturing in Canada’s heartland. When, after a year, there appeared to be little sign of that happening, analysts naturally started worrying. Perhaps those manufacturing jobs were gone for good—and even lower oil prices wouldn’t bring them back.

But all that was required was a bit of patience. As the Canadian economy has picked up steam, employment growth has accelerated to almost 2.0 percent over the past 12 months. Figure 2 shows the main industries to experience job growth. And manufacturing, which accounted for 10.0 percent of the net jobs in the year to July, is in that group.

Not surprisingly services jobs make up the largest share of net job growth. Education and health and social services together accounted for almost one quarter of the 300,000 jobs created over this 12-month period. These sectors together have continued to grow (although at a slower rate) through the slowdown in 2014–15.

The fast growth of professional, scientific, and business services may be partially driven by outsourcing. But it’s also likely driven by the same factors that make this a key category of job growth in the United States. As value added is increasingly embodied in ideas, producing those ideas—and protecting them legally—become key to economic growth. And these are generally well-paying jobs, with salaries 8.0 percent above the average for all industries in 2016.

The growth of retail trade jobs is also accelerating. Although helpful in many ways, it’s also a little worrisome given the experience in the United States. South of the border, jobs in retail trade peaked in January 2017, and have declined a bit since then. That’s been accompanied by some spectacular retail bankruptcies,4 and much talk about whether traditional retail (and the associated jobs) has a future in the age of electronic sales.5 Canada probably can’t depend on further job growth in the retail sector, as trends in the United States do have a way of moving north.

But the growth of manufacturing jobs is, indeed, good news. It is spread over a wide variety of industries, and suggests that Canada’s competitiveness is finally returning. And, in fact, exports of non-energy goods were starting to show some strength this spring, although the July number showed a setback. It’s a setback Canadian policy makers hope is only temporary. 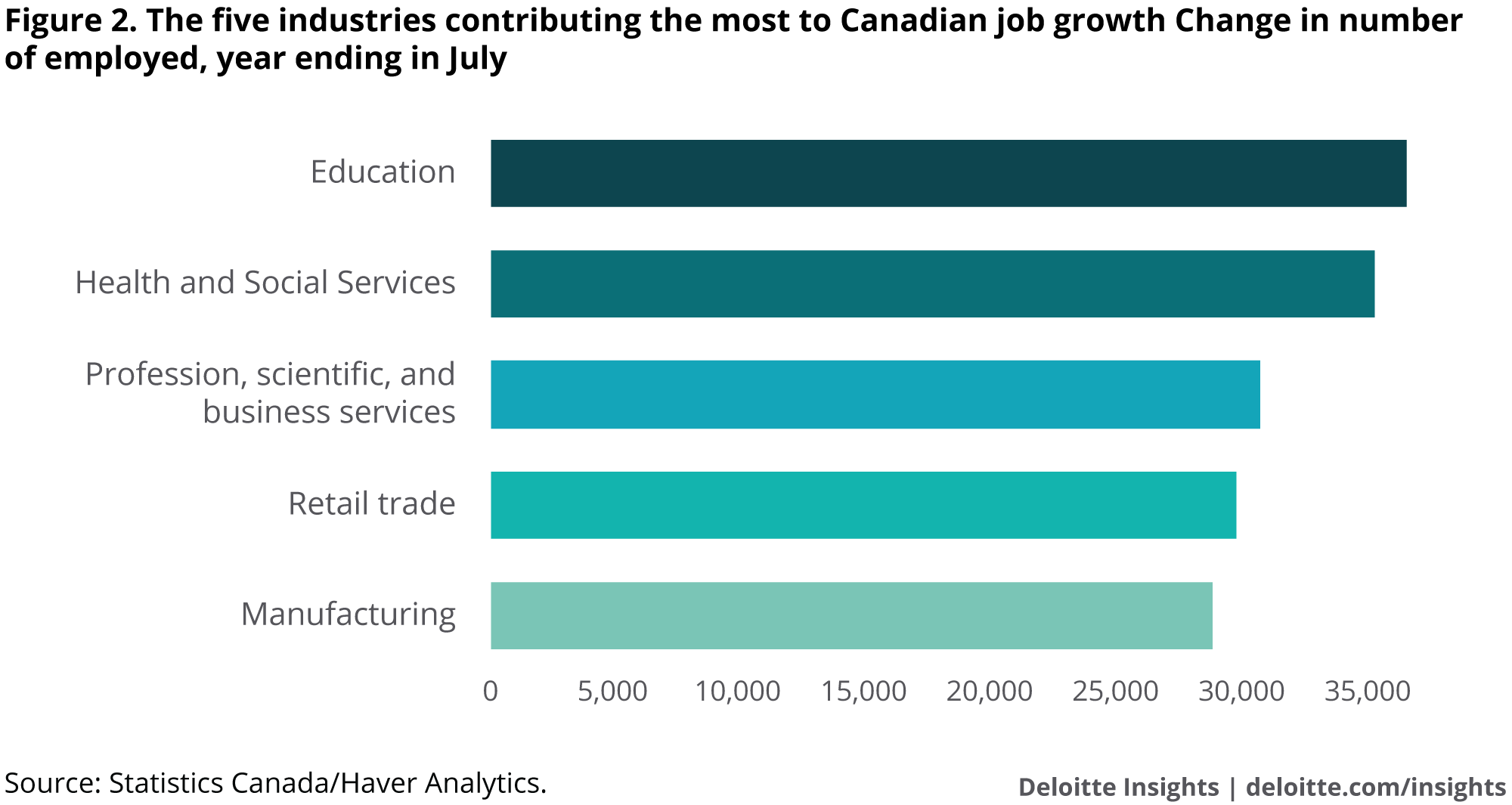 The mainly psychological impact of the aerospace industry

As US and EU aircraft makers compete in major global aircraft markets, Canada’s major aerospace company has fashioned a competitive niche in regional jets, smaller aircraft. Its chief competitor in this space is a Brazil-based company, and the World Trade Organization disputes between the two countries and companies read like a mini-version of the US-EU disputes over subsidies to US aerospace players.6 But two changes have brought the United States into the picture. The first change is that both regional jet producers now have larger planes to offer customers. Those planes are competitive with the smallest jets in the the US companies' catalogs. And the second change is, of course, the trade policies of the new US Administration. Everything came together on September 27 when the US Department of Commerce announced that it was placing a 220 percent tariff on Canadian manufacturers' larger aircraft. That means that the cost to an end user in the United States would be triple the price charted by the maker. And that would mean an end to sales of these jets in the largest market in the world.7

The outcome of this matter remains in doubt. But it does raise the question—Just what is at stake for Canada? How important is Canada’s aerospace industry?

Figure 3 shows some basic metrics for the Canadian aerospace industry. The industry directly accounts for just 0.3 percent of all employees, and a bit more of GDP. But it’s a larger contributor to Canada’s exports. Aircraft and parts were 3.5 percent of total exports in 2016. All said, it’s hard to see the hit to the aerospace industry having a significant impact on the overall Canadian economy.

But the US action is very significant in three ways. First, Canada will be tempted to retaliate (as will other countries in the Canadian companies' supply chain).8 Second, the US decision is a major shock to Canada’s long-standing trade relationship with its southern neighbor. Canadian businesses may not have a lot of obvious alternatives to the large and lucrative US market, but investment decisions must now take into account the possibility of awakening political opposition to Canadian companies’ operations in the United States. And third, aerospace is a psychologically important industry. Like computer software and automobiles, many people—rightly or wrongly—see countries with a significant aerospace industry as being particularly innovative and productive. That view may play a role in how much this trade dispute spills over into the wiser economies of both Canada and the United States.

Dr. Bachman is a senior manager with Deloitte Services LP and is located in Arlington.

Canada: Growing once again has been saved

Canada: Growing once again has been removed