The recent presidential election saw a left-wing party come to power in a landslide victory. Much of Mexico’s short- and long-term outlook will depend on the new president’s commitment to electoral promises and the implementation of the new NAFTA.

Mexico held a historical election on July 2 that saw Andres Manuel Lopez Obrador (popularly known as AMLO) become its next president. AMLO’s victory marked the first time in Mexico’s recent democratic history that a candidate from a left-wing party won the presidential elections. He is also the first candidate to win by a landslide, garnering more than 53 percent of total votes (a majority in a four-way race).1 During his campaign, he vowed to end corruption, restore economic growth, and fight poverty. But several challenges may hamper his ability to deliver on these promises, such as the uncertainty surrounding NAFTA and international trade, rising levels of government debt, and a delicate fiscal position of Mexico. The new administration will likely have to choose between toning down some of its campaign promises and continuing with a policy of financial stability and limited public expenditure, or increasing public expenditures and risking inflationary pressure and macroeconomic instability.

AMLO ran a presidential campaign centered on the fight against corruption and a nationalistic economic agenda that had more in common with the 1970s’ import substitution era than with the open markets and laissez-faire approach of recent previous administrations. However, he has proved to be a more pragmatic politician, willing to reach out to the private sector for joint ventures. During his term as Mexico City’s mayor, he worked with the private sector for the revitalization of Mexico City’s historic center (Centro Historico), and oversaw the construction of major infrastructure projects in Mexico City.2

Therefore, despite AMLO’s nationalistic undertones, he has openly expressed his support for a renegotiated NAFTA, given the benefits it has brought to the Mexican economy.3 In fact, a few weeks after winning the presidency, a team of AMLO’s economic advisors joined the Mexican delegation in Washington DC to continue the negotiations with US officials to try to reach a deal before the end of August.4 While a partial agreement between Mexico and the United States was announced by the current administration on August 27, addressing minimum wages as well as the rules of content in the automotive industry (75 percent of content from North America from the current 62.5 percent), a full deal that includes Canada has yet to be reached.5 With US midterm elections looming on the horizon, the stakes for reaching an agreement are high, as a new US Congress coupled with AMLO taking office in December 2018 could result in further delays on a new trade agreement, fueling the volatility of the Mexican peso (figure 1). The volatility of the peso has also been fueled by the 25 percent and 10 percent tariffs levied by US authorities on imports of steel and aluminum, respectively, in May 2018; exchange rates depreciated 8.3 percent in June 2018 from 2017 levels.6 These tariffs affect trade flows of about US$3 billion (about 1 percent of Mexican exports to the United States), but also likely cause delays on investment decisions that are hard to quantify. For example, when the current US administration said it was considering imposing tariffs on automobiles and auto parts from Mexico, major car manufacturers mentioned considering delays in investment decisions in Mexico.7 International trade uncertainty partly explains why, according to the International Monetary Fund (IMF), exports of goods and services are expected to grow at 2 percent, its lowest level since 2010, despite a relatively favorable exchange rate.8 For an economy where exports of goods and services account for 38 percent of GDP, any international shock can have severe consequences when it comes to economic growth and the management of public finances.

One of AMLO’s marquee pledges was the construction of two new refineries in the south of Mexico to restore the sovereignty of energy production with an estimated construction cost of US$6–12 billion per facility, about 10 percent of 2018 federal public sector expenditures.9 AMLO also promised to deliver scholarships to high school students and to double pensions for the elderly population, with an estimated total annual cost of 500 billion pesos (about US$26 billion).10 These two campaign promises would require resources equivalent to almost one-fifth of all the public government expenditure of the executive branch.11

AMLO’s economic advisors have suggested that a series of cost-cutting measures will help to generate additional resources to pay for his marquee programs. In his Plan 50, AMLO states that the Mexican government will save money through a series of fat-trimming measures that include slashing in half the salaries of the top government officials and employees, eliminating bonuses and private medical insurance for government employees, a more streamlined and transparent government procurement system, selling the presidential jet and other assets, and eliminating 194,000 government positions.12 However, all these measures will only generate 105 billion pesos of additional resources, far below the estimated amount the new administration will need to deliver on key campaign promises. Further, he has hinted in the past of a tax reform that would lower corporate taxes and value-added taxes.13 The outlook of a reform that further lowers taxes seems complicated, considering the already low tax collection rate of 17 percent of GDP, the lowest among members of the Organisation for Economic Co-operation and Development (OECD).14

The capability to deliver on these promises without destabilizing the economy by piling on additional sovereign debt seems slim. According to the most recent IMF estimates, the Mexican government’s gross debt will reach 54 percent of the GDP by the end of 2018, the second-highest number since Mexico transitioned to a democracy in 2000 (figure 2). While this number is lower than other Latin American economies (Brazil, 87 percent; Venezuela, 162 percent), delivering on multiple campaign promises without increasing the deficit and the overall national debt could pose a significant challenge, particularly in a context of international turbulence where the economy is highly reliant on international trade. 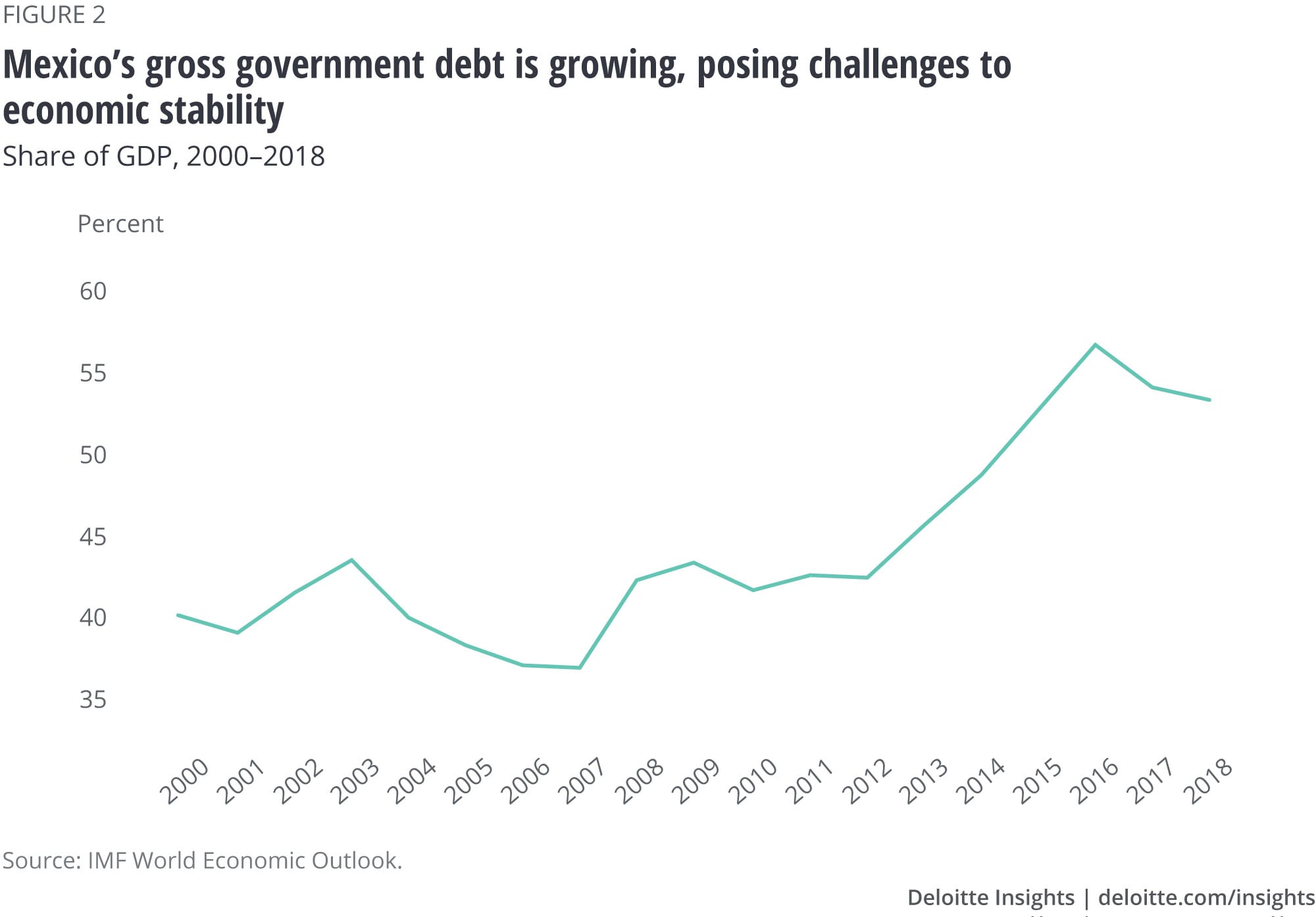 The new administration faces external challenges—primarily the renegotiation and implementation of NAFTA, which can negatively impact the country’s exchange rate and contribute to inflationary pressure. In this scenario, a government that aggressively intervenes to curb inflation and provide stability to financial markets will be required.

Even if major disruptions on international trade are averted, many of the campaign promises could require a substantial increase in public expenditure. While previous administrations vowed to control economic instability with higher interest rates and reductions in public expenditure, the new administration will likely face a difficult choice between preserving macroeconomic stability and delivering on key campaign pledges. A series of budget reductions and saving measures will likely be insufficient to create enough room to deliver on these promises, making debt the only other viable mechanism, thus jeopardizing the hard-fought macroeconomic stability that the country achieved over the last two decades.

Jesus Leal Trujillo is a senior consultant and data scientist and is based in Arlington, Virginia.

Mexico: Economic challenges await the new administration has been saved

Mexico: Economic challenges await the new administration has been removed