The geography of jobs, part 3: Mapping the effects of international investment flows

The geography of jobs, part 3: Mapping the effects of international investment flows

Manufacturing and professional, scientific, and technical services stand out as industries where foreign direct investment in the United States has had a surprising impact on job creation. 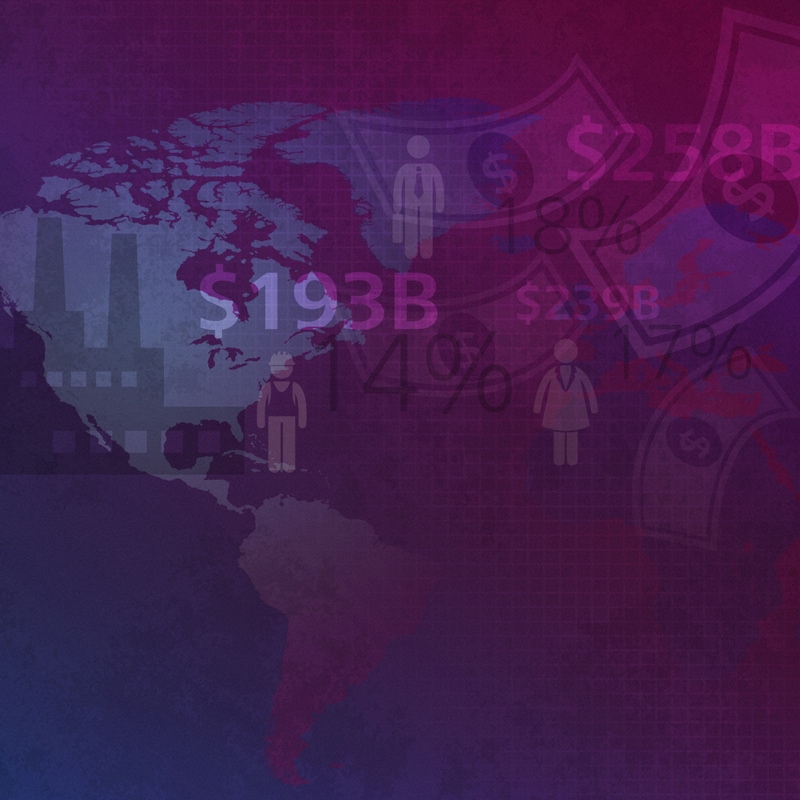 Countries continue to find the United States an attractive investment, and their investments create US jobs. However, this important job generator should not be taken for granted: The United States competes with the rest of the world for investment.

As companies look to grow, one of their major considerations is location: Where should production take place, and where should service providers be located? For service businesses, the availability of a quality workforce is generally the critical factor. With production facilities, the location decision is more complex because of the fixed capital investment that is generally required. In addition to making sure that an appropriately trained and educated workforce is available, decision makers must consider many additional factors related to the movement of goods, including transportation infrastructure, supply chain considerations, the business and regulatory environment, the availability of suitable real estate, risk, and quality of life (particularly for expatriates).

A nation’s attractiveness to expanding businesses—both foreign and domestic—is key to its economic growth. Within countries, there is substantial competition at the sub-national level to attract foreign as well as domestic investment and the employment it brings. In the United States, states and localities actively promote investment through a variety of means, with economic development offices touting the quality of local workers and infrastructure and offering tax and other financial incentives.

Just as we saw how job creation and wage growth vary among US states in the first two “Geography of Jobs” reports, this third report chronicles the varied impact of foreign direct investment (FDI) on state job generation.

Investment flows to the United States

The United States is a major recipient of international investment dollars, although the proportion of world FDI flowing to the United States has lessened over the years. As shown in figure 1, the absolute dollar amount of foreign investment that the United States attracts has been relatively level over the last 15 years, averaging just under $200 billion per year. This is in stark contrast to FDI in the European Union, which has been on a downward trajectory since 2007—the year prior to the start of the financial crisis—with no obvious signs of recovering. However, over the same period, investment flows to the rest of the world, especially to China, grew rapidly. In the early 2000s, China received less than 10 percent of world FDI. More recently, that proportion has risen to between 15 and 20 percent. Because of this rapid growth in annual flows, the stock of foreign-owned investment in China rose rapidly from 3.7 percent in 2004 to 9.5 percent in 2012, making China second only to the United States, which held 13.4 percent of world foreign direct investment as of 2012.1

The United States is a major recipient of international investment dollars, although the proportion of world FDI flowing to the United States has lessened over the years. 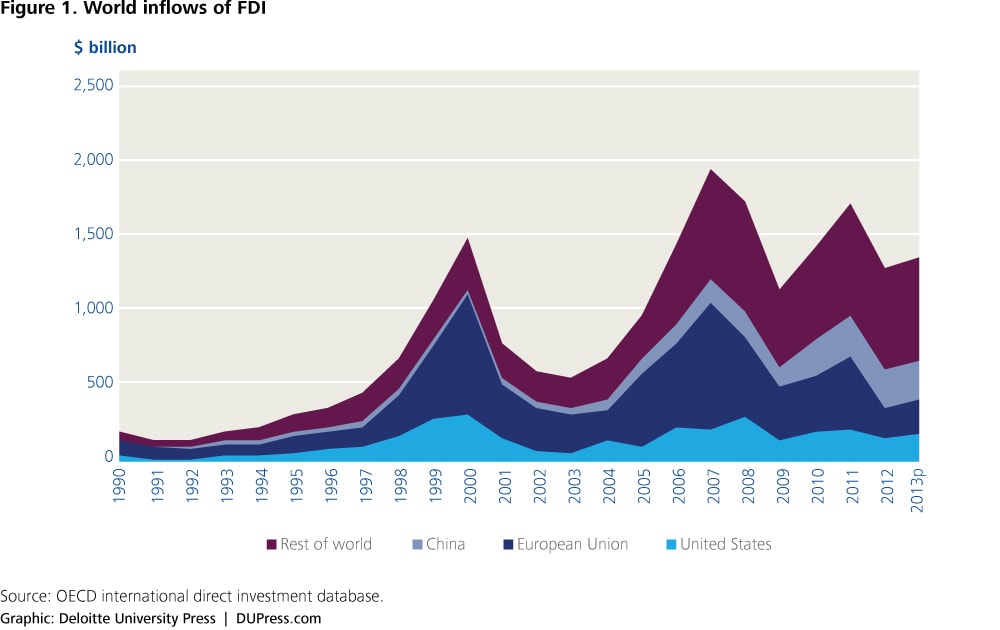 The stock of FDI on a historical cost basis is the sum of a country’s annual FDI inflows (which can be negative if enterprises withdraw investment). With its fairly constant level of inflow, the stock of US FDI has been rising steadily over time. In the recession/post-recession period of 2007 to 2013, FDI in the United States increased by 38.7 percent and totaled $2.8 trillion in 2013.2 However, this amount is substantially less than the asset value that FDI generates. The total asset value of majority-owned foreign multinational enterprises (MNEs) in the United States was $12.7 trillion in 2012 (the latest date for which data are available), based on FDI of $2.6 trillion (2012). 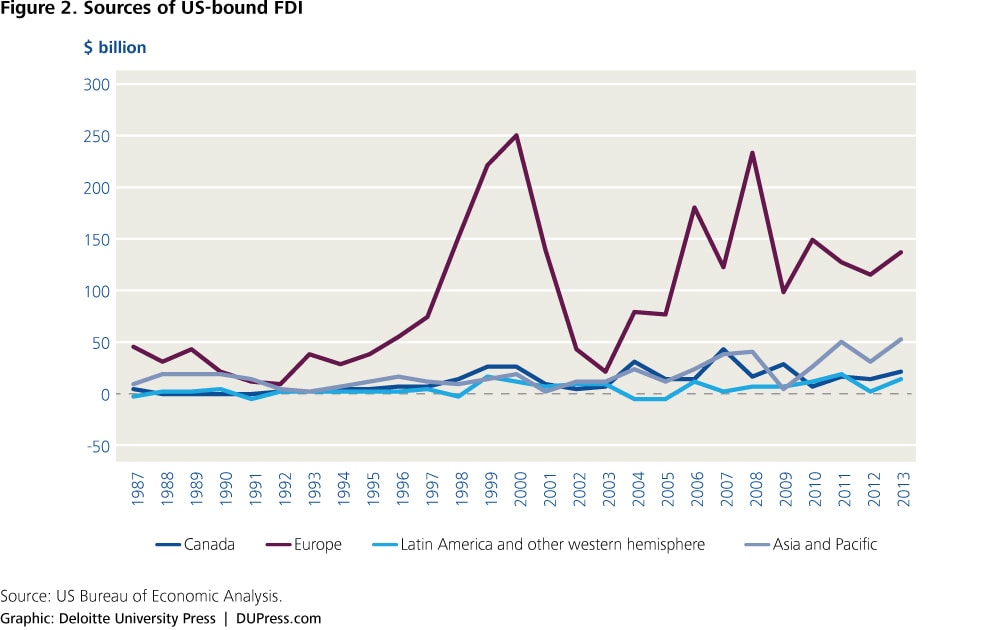 The changing US FDI market basket

As mentioned above, the United States has attracted a total FDI stock of $2.8 trillion, on a historical cost basis. Three sectors account for three-fourths of the investment:

As shown in figure 3, manufacturing was the largest and fastest-growing industry in dollar terms for foreign investment. FDI in US manufacturing grew by $288 billion, or 44.4 percent, between 2007 and 2013, and it now totals $936 billion. Within manufacturing, the sectors attracting the most FDI include chemicals, petroleum extraction and refining, motor vehicles and parts, primary and fabricated metals, food, and computers and electronic products. The second-largest industry in terms of FDI was “other industries,” which consists primarily of nonbank holding companies (attracting 39 percent of the total FDI in “other industries”), mining (25 percent), and utilities (11 percent); overall, FDI in “other industries” totals $590 billion. FDI in finance and insurance grew slightly more slowly than the “other industries” category, making finance and insurance currently the third-largest industry recipient of FDI. 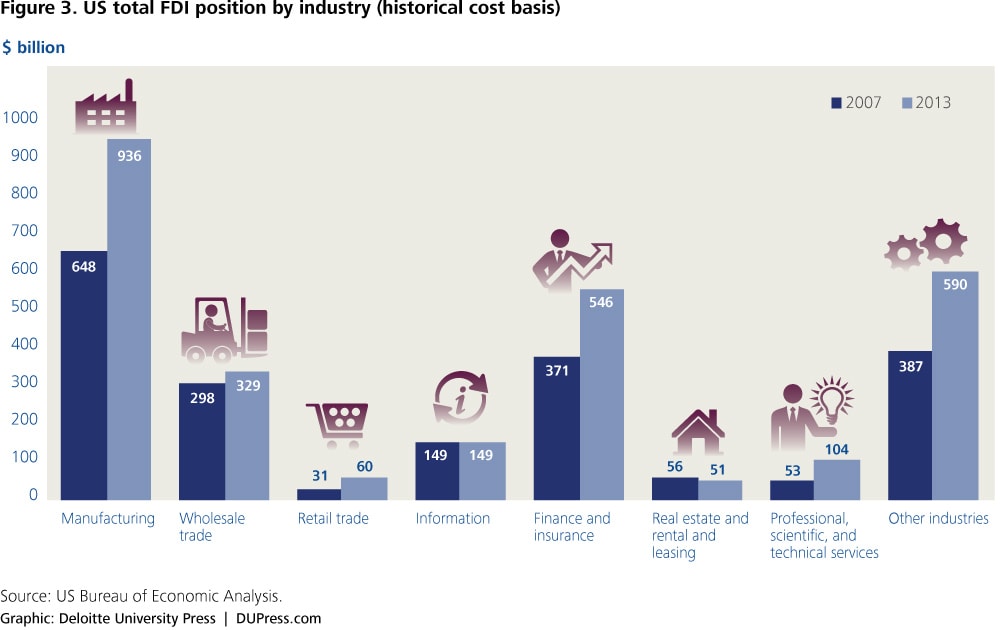 Although smaller in size, the two industries with the highest percentage gain were retail trade and professional, scientific, and technical services, both of which saw the amount of FDI they attracted almost double during the period.

Investment by foreign enterprises gains in value over time and is an important job generator. In fact, US employment tied to FDI fared better in the aftermath of the recession than did employment in general. Employment by majority-owned US affiliates of foreign MNEs numbered 5.8 million in 2012, an increase from its 2007 level of 5.6 million.3 In contrast, overall employment in the United States was still 3.8 million below its 2007 level in 2012.4

Among the US states, energy suppliers were the big winners in FDI-driven employment on a percentage basis between 2007 and 2012, with states such as North Dakota, West Virginia, Louisiana, and Texas getting a high proportion of their FDI-related jobs from oil and gas extraction. However, some manufacturing states, such as Michigan, are also high on the list. In terms of the number of jobs gained, Texas has been the big “winner,” with a gain of 53,800 jobs related to foreign MNE employment. Michigan, Georgia, Oklahoma, Pennsylvania, and Arizona also showed substantial gains in the number of foreign MNE-related jobs between 2007 and 2012 (figure 4). 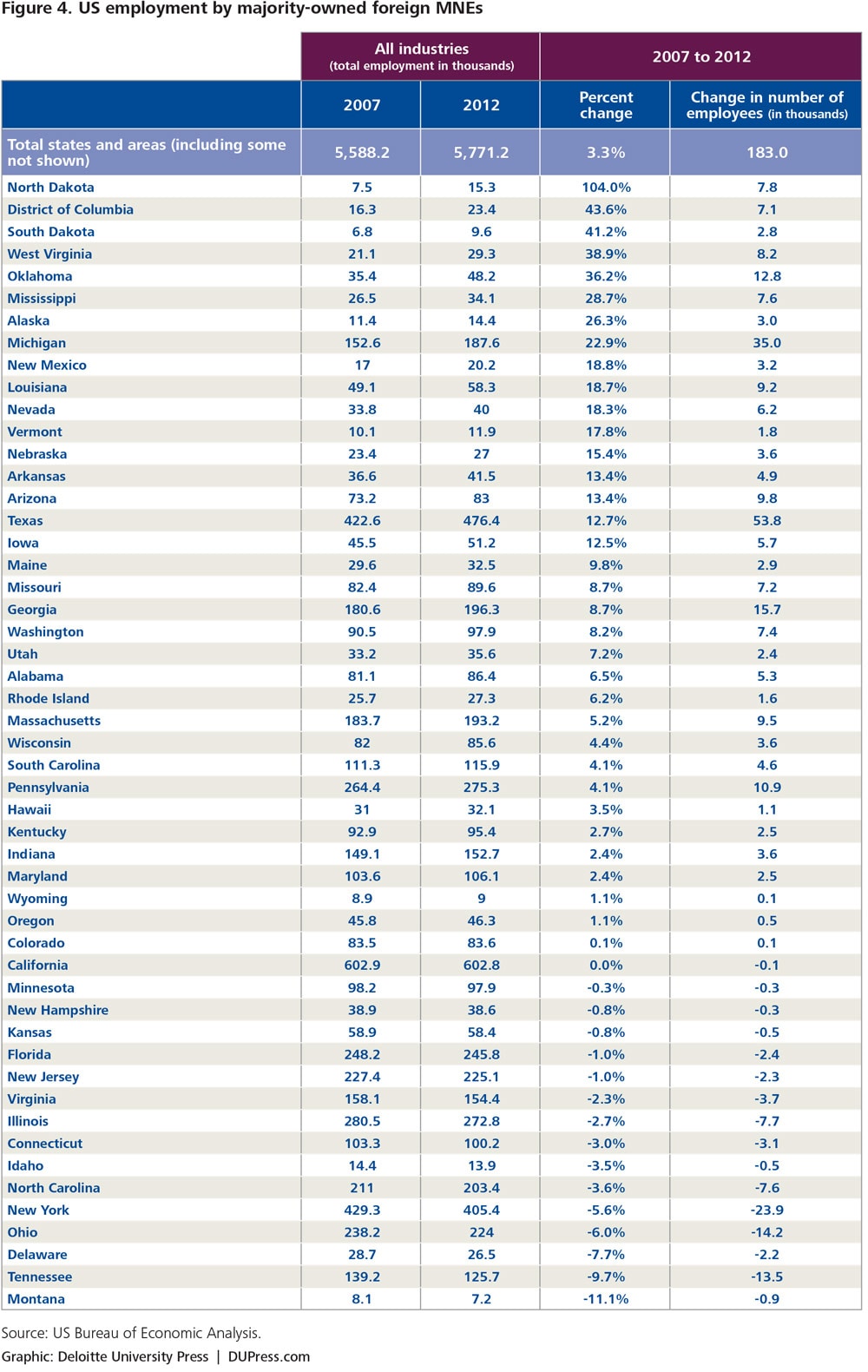 However, FDI investments in the various industries do not create jobs in proportion to the number of dollars invested. Figure 5 shows the proportion of total FDI invested and the proportion of employment tied to that investment.5 At the two extremes are retail trade, which has only 2 percent of total FDI stock but 9 percent of the employment supported by FDI, and finance and insurance, which accounts for 22 percent of total US FDI but only 7 percent of FDI employment. Therefore, when considering the impact of FDI on job generation at the state level, it is critical to consider both the dollar amounts of the investments and the industries in which the investments take place. 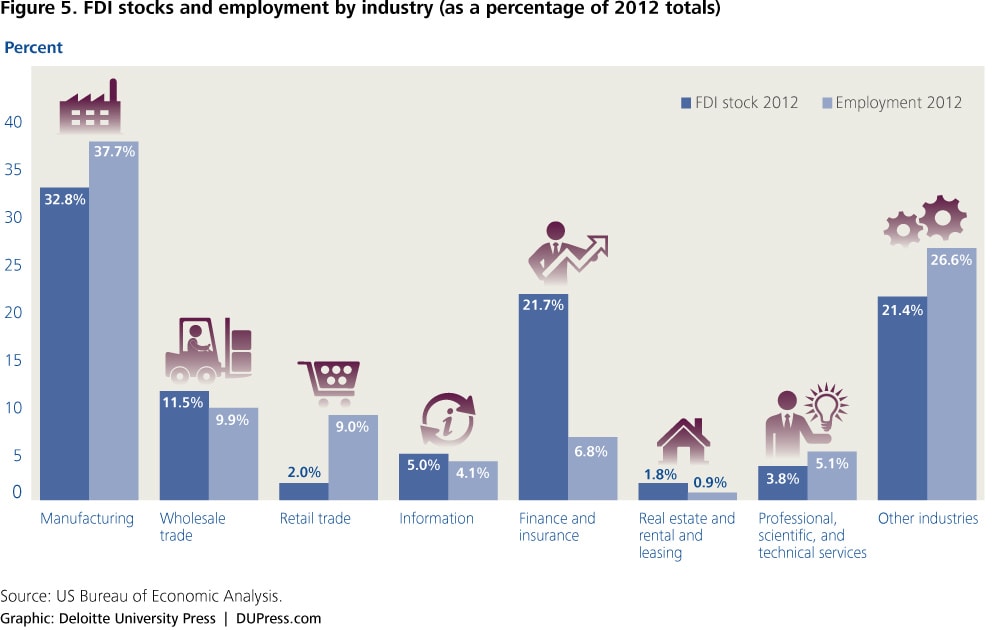 Because the most recent Bureau of Economic Analysis (BEA) data on employment supported by FDI comes from 2012, the remainder of the discussion is supplemented by data from another source, FDI Markets. These data differ from the BEA data in some very important respects. Specifically, the BEA tracks actual investments by foreign enterprises as the investments are made; it also tracks actual employment at facilities at majority-owned foreign entities. Additionally, the BEA estimates of FDI include investments related to mergers and acquisitions as well as new or “greenfield” investments and expansions. In contrast, the FDI Markets data consist of announced investments culled from press reports, and they include greenfield and expansion investments only. Since the employment estimates in the FDI Markets data reflect the projected number of jobs companies plan to generate when the investment is completed, there is no way of knowing exactly when or ultimately how many jobs will be created. However, given the focus on jobs in this series, the FDI Markets data offer interesting insights.

The next sections consider two industries where FDI, and the employment generated by FDI, have run counter to expectations:

Manufacturing: Scraping the rust off the rust belt? 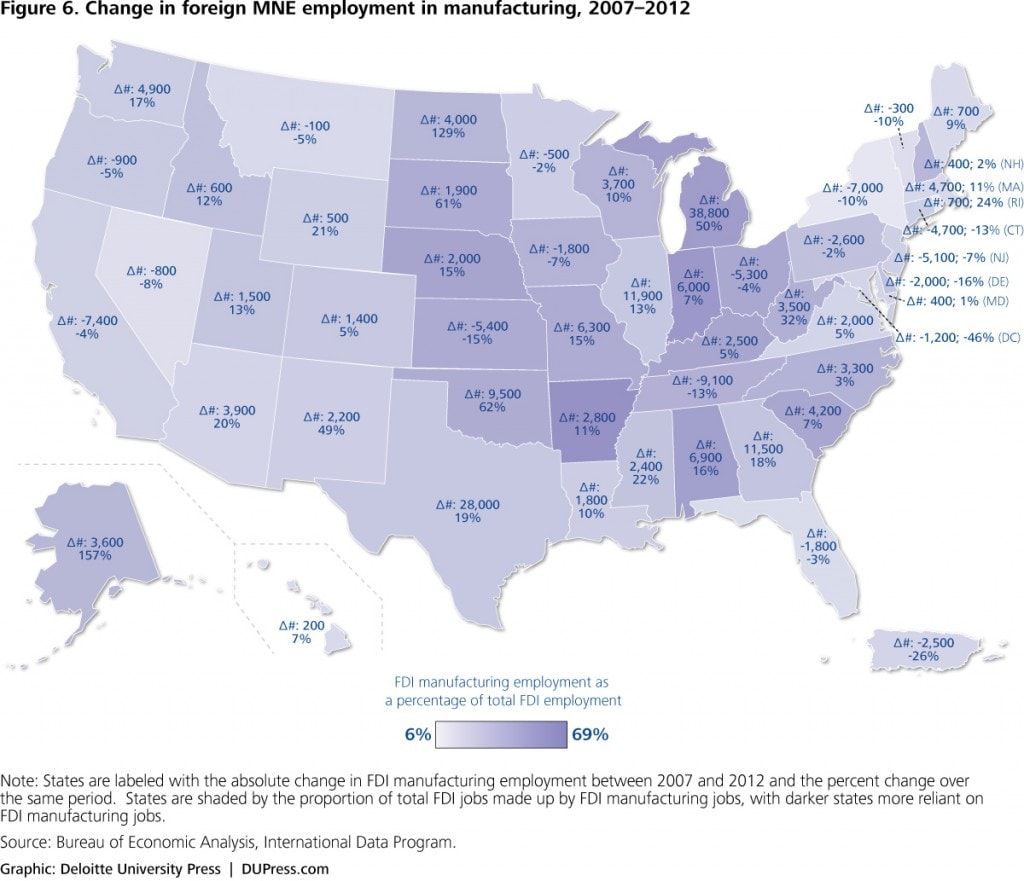 The recovery in US manufacturing is being driven by several factors, including new manufacturing methods that lower the bar for scale,8 rising production costs in competitor countries, increased labor productivity through greater skills and capital intensity, and the overall resurgence in domestic demand. When we examine the types of manufactured products receiving announced foreign investment in more detail, we find that automotive components was the most attractive subsector for foreign MNEs between 2010 and 2014. This subsector led the manufacturing industry in FDI jobs created in three out of the past five years, averaging 10,832 FDI-created jobs per year, with Michigan leading the states in four out of the past five years.9

A bright spot in FDI: Professional, scientific, and technical services

Professional, scientific, and technical (PST) services makes up only a small part of our total FDI market basket, but it is growing fast. In fact, this sector showed the second-fastest employment growth rate among inbound FDI-related jobs between 2007 and 2012. This pattern is interesting because it goes against the prevailing wisdom that PST jobs are largely being offshored. Conventional wisdom holds that the inexorable pressure to move everything from “back office” processing to research and development facilities offshore to countries that pay lower wages is costing the United States jobs. According to the data since 2007, however, these losses may have bottomed out, and employment in PST, at least, may be starting to climb again. In 2013, the White House’s Council of Economic Advisors reported that wage inflation in some countries has exceeded productivity growth, which may help explain the growth in US-based PST jobs.10 Two states exemplifying this growth are California and Virginia, which saw FDI employment in the PST sector increase by 7,600 and 6,300, respectively, between 2007 and 2012. 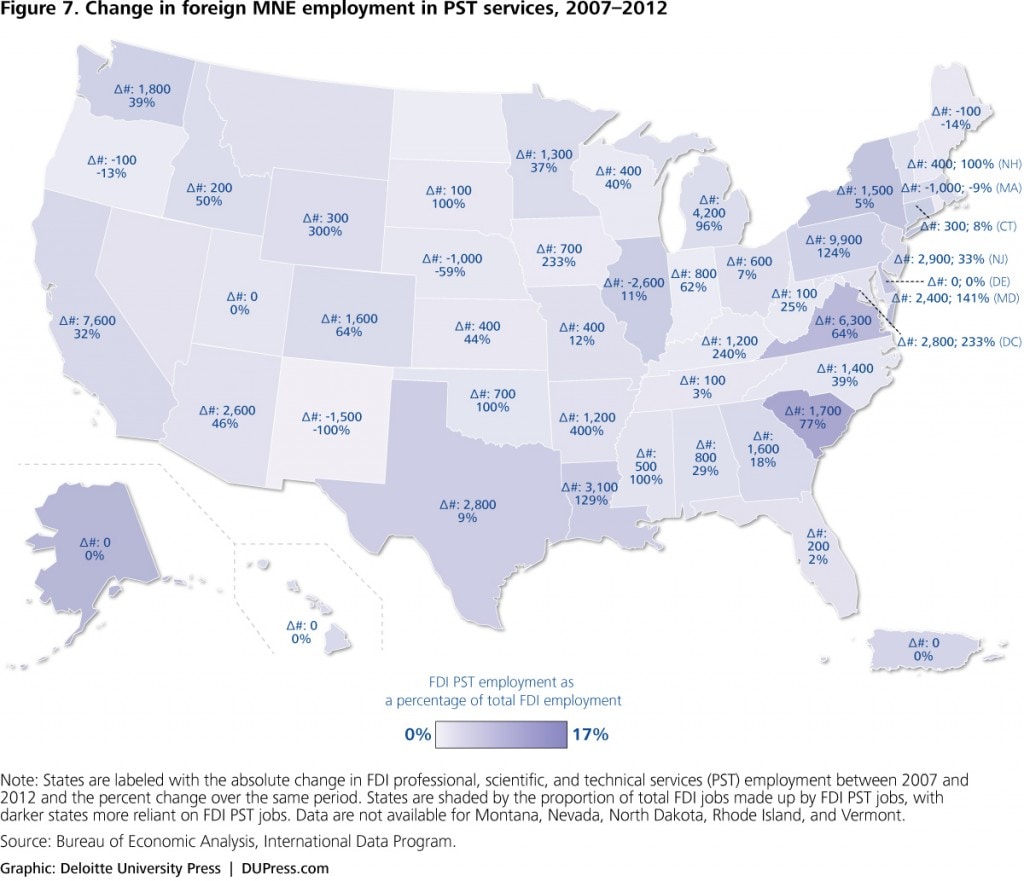 This growth pattern seems to be continuing into 2013 and 2014, according to data from FDI Markets. These data show steady growth in FDI business services projects, which are on track to create an average of 8,600 jobs per year in business services since 2010.11

When we look closely at the types of recent PST projects that are attracting foreign investors, our expectations are again confounded by the type and location of these projects. The largest announced PST projects over the past four years in terms of capital investment are distributed among sectors such as custom computer programming, retail banking, and financial services. The four PST FDI projects claiming to create the largest numbers of jobs were undertaken by Indian MNEs creating custom computer programming jobs; they were located in Wisconsin, Michigan, and Ohio, states with mid-range average wages.12 These projects appear to be examples of US process efficiencies and skill levels trumping potentially lower wages offshore for certain types of services.

The fact that jobs tied to FDI actually managed to increase while total employment still languished demonstrates the power that long-term foreign investment can bring to the US economy. That Korea ranks ahead of the United States, and that the United Kingdom is nipping at our heels, in the World Bank’s Ease of Doing Business rankings should give US policy-makers pause13—and hopefully renew their focus on making the United States the best place to live and do business.

The fact that jobs tied to FDI actually managed to increase while total employment still languished demonstrates the power that long-term foreign investment can bring to the US economy.

To explore further the interactions between FDI employment in different industrial sectors in different states, we invite you to visit our interactive graphics page and discover additional insights yourself.

Issues by the Numbers , Manufacturing , Economics

The geography of jobs, part 3: Mapping the effects of international investment flows has been saved

The geography of jobs, part 3: Mapping the effects of international investment flows has been removed

An Article Titled The geography of jobs, part 3: Mapping the effects of international investment flows already exists in Saved items