Plugging into the future

Plugging into the future Electrifying the global automotive industry

Adoption of electric vehicles is picking up, mostly thanks to supportive policy and technological advancements. Car manufacturers, suppliers, and dealers may do well to think about the implications of vehicle electrification.

It was a time of rapid, unbridled innovation. Advances in electrified mobility were emerging at breakneck speed as companies raced to develop new ways to move the masses. In fact, electric cars accounted for a third of all the vehicles on the road.1

This is not another rose-colored vision for a utopian future, but the reality of a fledgling automotive industry that was just finding its feet in the United States over a century ago. Ultimately, our first dance with electric vehicles (EVs) was cut short by the introduction of the Ford Model T in 1908, setting up the following 10 decades of fossil fuel dominance that relegated EVs to the shadows.

Over the years, EVs have seen sporadic attempts at resuscitation,2 but they were never able to get around fundamental obstacles that included high production costs, limited driving range (particularly in cold weather),3 and lengthy charging times. However, over the last decade or so, rising pollution levels and the necessity to reduce dependence on imported fuel have prompted governments around the world to embrace a migration from fossil fuel-based vehicles to vehicles powered by electric motors. Having said that, this fundamental evolution in mobility is playing out in different ways around the world.

China has been at the forefront of promoting EV usage whether the aim is to address a rapidly increasing pollution problem, to reduce its reliance on imported oil, or simply to stake a leadership claim on the next era of global mobility. Not only is China currently the largest light-vehicle market, but it is also leading global EV sales, accounting for more than half of the 1.1 million EVs sold in 2017. 4 China is also driving the electrification of other vehicle types, such as electric buses and electric two-wheelers, accounting for 99 percent of these two modes of electric transportation stock globally.5 To meet its goal of becoming the undisputed EV champion by 2025, China is implementing a two-pronged approach by offering subsidies to EV buyers while making it mandatory for automotive companies to amass credits on the sale of EVs that can then be transferred or traded.

India is another country heavily reliant on imported oil. In a bid to manage its massive oil import bill while curtailing a growing pollution problem, the government is encouraging EV adoption. It aims that by 2030, EV sales should account for 30 percent of all new vehicle sales.6

The European love affair with diesel engines may be over

EV adoption is picking up in Europe. In the EU-15 region alone, the share of diesel engine-based vehicles declined from a high of 56 percent in 2011 to 45 percent in 2017, a whopping 11 percentage point drop in just six years.7 The decline was set off by consumer reaction to the “dieselgate” scandal that engulfed Volkswagen in 2015. The subsequent decision taken by the German federal court to allow individual cities to ban diesel vehicles and additional taxes imposed on diesel vehicles in countries such as the United Kingdom are causing auto buyers to think twice before committing to this engine technology. In addition, a few countries, including Norway, the United Kingdom, France, and the Netherlands, have already announced plans to ban the sale of vehicles that run on conventional gas and diesel fuel. This is planned over the next 2–3 decades, which bodes well for EVs.

In fact, Norway is at the forefront of the movement to adopt a greener vehicle strategy, as evidenced by increasing sales of all-battery electric vehicles (BEVs) and hybrid electric vehicles (HEVs)—together they accounted for 52 percent of all new car sales in 2017 compared to 40 percent in 2016. The overall move to EV technology that has taken hold of the market has come on the back of the Norwegian government’s generous subsidies in the form of tax exemptions, subsidized parking, and available recharging stations.8

North America is likely to lag for some time

Consumers in North America prefer to drive vehicles with gasoline engines ,as the price of gasoline is significantly lower there than in many other markets around the world (figure 1). In fact, even though retail gasoline prices have been on an upswing recently, they remain much below the high point reached earlier in the decade (figure 2).9 This low fuel-price environment encourages a growing consumer infatuation with large sport-utility vehicles. 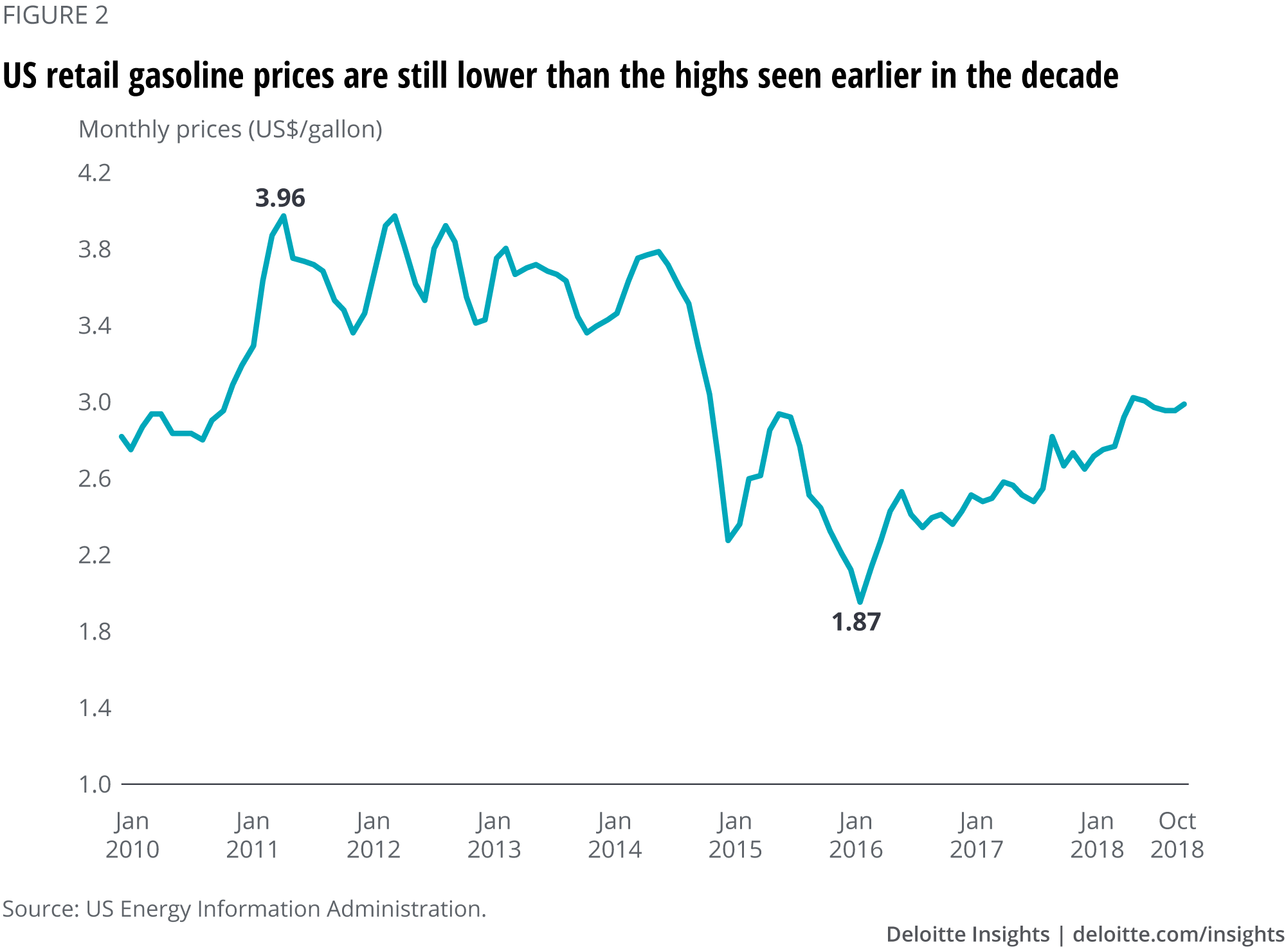 The US government’s policy has shifted to looser emission standards and the government is tightening the screws on tax rebates; together these have dampened EV adoption. Consumers are also not fully bought into the idea of EVs as old perceptions regarding driving range, cost, and charging time are proving hard to shift even though the technology has improved exponentially over a very short period of time.

Global EV market is poised for an exponential increase in demand

Global sales of electric and plug-in hybrid cars increased by 54 percent in 2017 to touch 1.15 million units. Of these, two-thirds (around 750,000 units) were BEVs and the remaining HEVs.10 The International Energy Agency is optimistic that the global stock of electric cars will grow at a compounded annual growth rate of 33 percent from 3.1 million units in 2017 to 125 million by 2030, mainly driven by government policies encouraging vehicle owners, fleets, and municipalities to embrace cleaner vehicles.11 Supportive policies in the form of financial incentives and public procurement programs, along with tighter emission standards and advancements in the lithium-ion battery technology, will likely be the key factors driving EV growth. Speaking of advancements in battery technology, battery prices have dropped by more than 80 percent since 2010, from US$1,000 per kilowatt-hour to US$209 per kilowatt-hour in 2017.12 Prices could drop even further, potentially touching US$100 per kilowatt-hour by 2026, making battery-powered EVs an attractive option for auto buyers.13

The market for EVs may expand exponentially over the next few years, but as a percentage of both total annual sales and vehicles on the road, it will likely remain low for some time. As per industry forecasts, there will likely be around 2 billion cars on the road globally by 2040, which is expected to dwarf the number of electric and plug-in hybrid vehicles expected at that time.14 Nonetheless, EV penetration is growing, setting the stage for a full global transformation at some point down the road.

Consumer interest in EVs is growing, but expectations regarding performance remain high

The appeal of EVs is intensifying globally, with consumers across several major automotive markets showing interest in acquiring a hybrid or full battery-electric powertrain as their next vehicle (figure 3). Nonetheless, perceived concerns, especially regarding vehicle performance, are proving difficult to shift (figure 4). Deloitte’s 2018 global automotive consumer study reveals that: 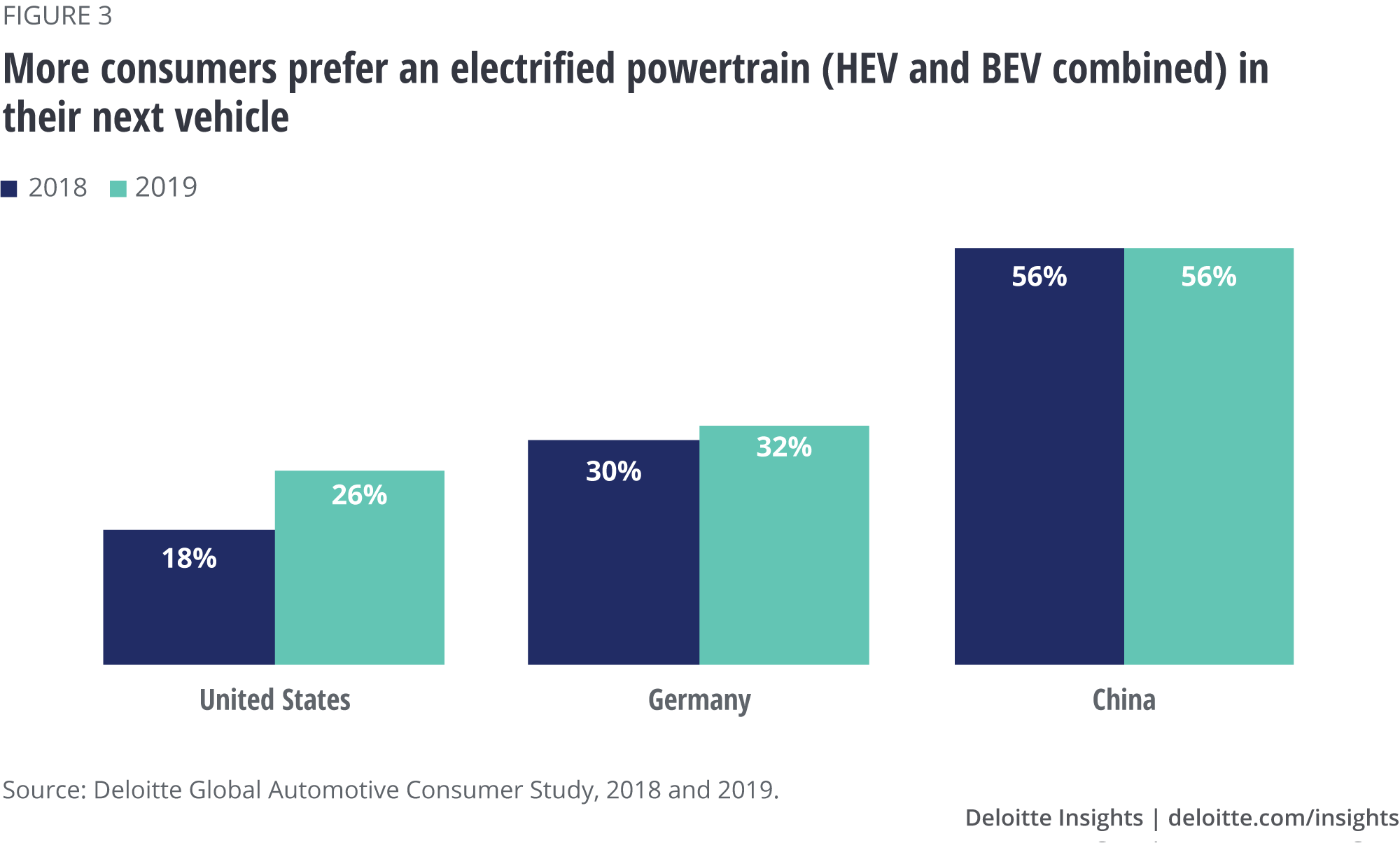 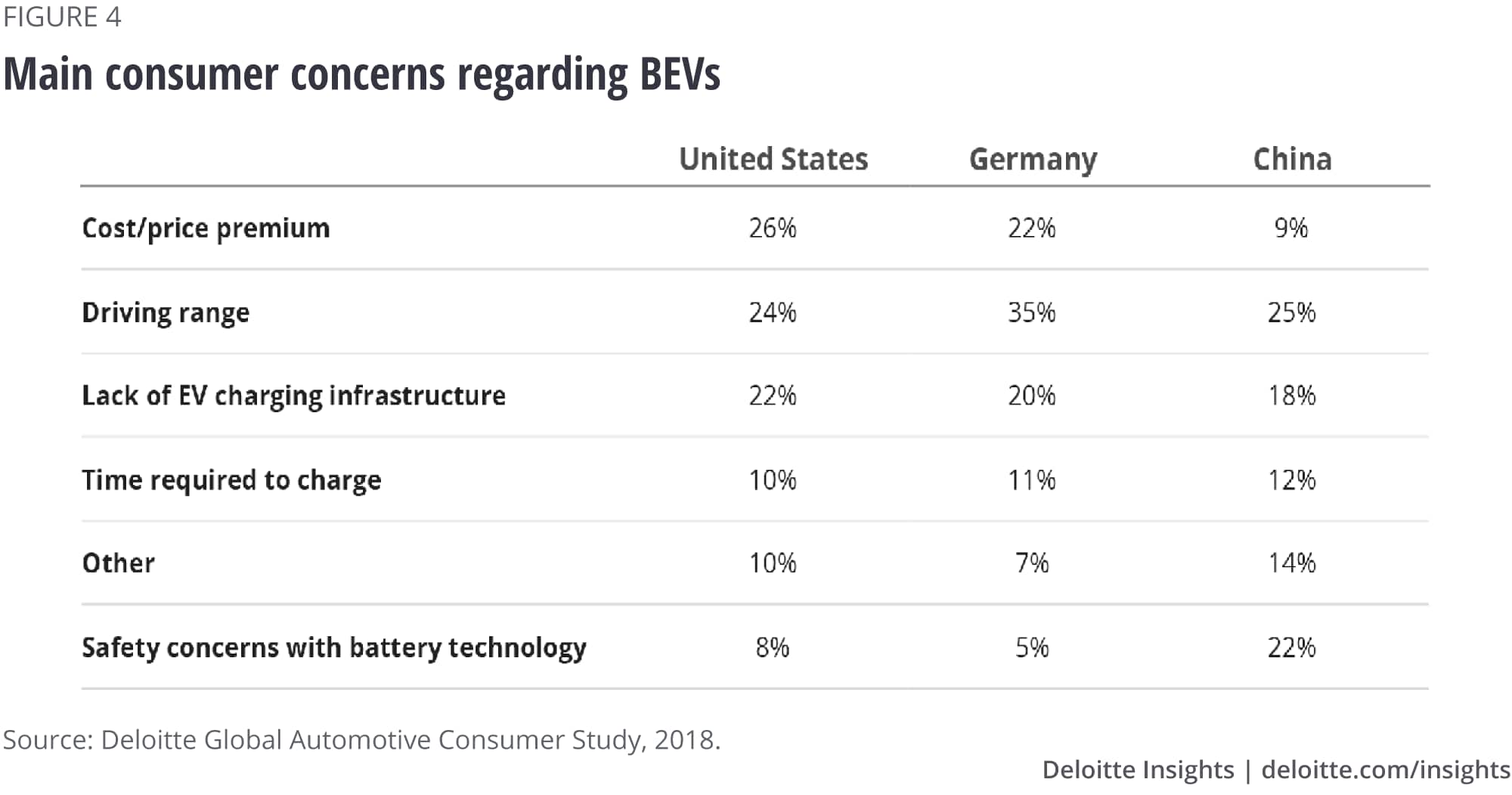 Clearly, even though EVs’ driving range has improved to the point where it should not be an issue for the vast majority of consumers, negative perceptions remain deeply rooted in consumers’ minds; in fact, these are a major challenge for manufacturers.

Building charging networks is typically the “chicken and egg” problem—consumers would be willing to try BEVs once there is an abundance of charging points, while original equipment manufacturers, governments, and private investors may wait for sales volumes to pick up before making the sizable investments necessary to install and maintain a viable charging network.

Consumers are also concerned about the time it takes to fully charge an EV. While even the fastest commercial charging points still take much longer to charge than a traditional stop takes for a gasoline fill-up, new battery technology on the horizon provides confidence. In fact, there are several companies and industry partnerships currently conducting research to develop solid-state batteries that promise both faster charging times and significant improvements in overall safety.15

Electrification of the global vehicle fleet is likely to impact companies across the automotive value chain. The players that can effectively anticipate the changing environment and place their bets accordingly are likely to be best positioned to create and sustain a competitive advantage as industry transformation plays out over the next few decades.

Considerations for players across the automotive value chain

There may still be a long way to go before we see a full-scale migration away from the fossil fuels that have underpinned global mobility for so long. Nonetheless, the confluence of several important trends may finally return us to the bright, electric future envisaged over a century ago.

The authors would like to thank Ramakrishna Sadhu for his contributions to research for the article.

Deloitte’s Automotive practice is at the forefront of top trends and issues facing the industry. Our industry professionals can help you navigate through complex issues and challenges impacting your company and the rapidly evolving automotive industry. 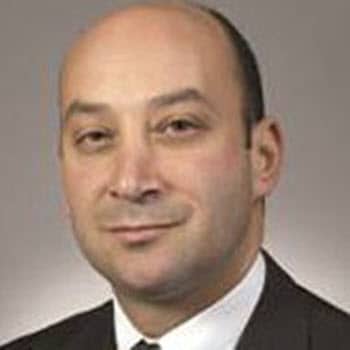 Explore the future of mobility

Srinivasa Reddy Tummalapalli is a senior research consultant supporting Deloitte’s global Automotive practice. He has more than a decade of experience in financial modeling, market intelligence, and the development of engaging, actionable insights. He is based in Hyderabad, India.

Plugging into the future has been saved

Plugging into the future has been removed