Sustainability: Why CFOs are driving savings and strategy

Sustainability: Why CFOs are driving savings and strategy A CFO Insights article 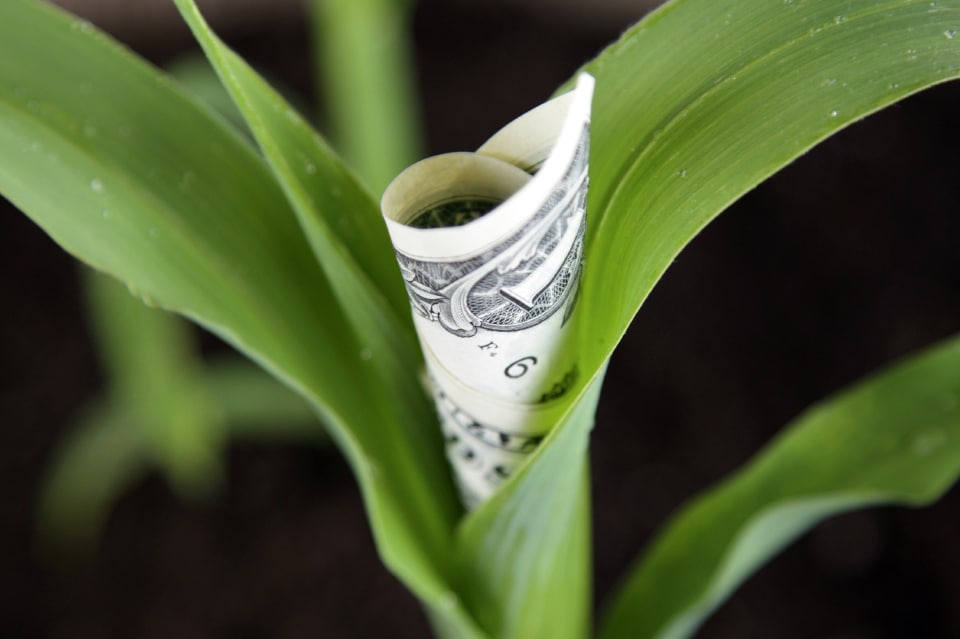 This has been a critical year for sustainability and business. At the Rio+20 Corporate Sustainability Forum in June, more than 1,000 corporate leaders pushed for new regulations and measures to incentivize moves to a green economy.1 Pending European Union regulations are expected to make certain types of nonfinancial reporting, including environmental reporting, mandatory in the near future.2 And the International Integrated Reporting Council (IIRC) is putting the finishing touches on its first framework, which is expected to debut in 2013.3

“Sustainability provides virtual savings at an early stage and can only be made real when well integrated with finance.”- CFO, China

Sustainability has obviously arrived on many corporate agendas. And judging from the results of a new Deloitte Touche Tohmatsu Limited (DTTL) study of CFOs, it has also landed squarely on the CFO agenda. In fact, while sustainability may have taken a back seat to dealing with the global economic malaise of the last few years, it has now emerged as a finance priority not just because of regulations and the push for transparency—but because it has been demonstrated to be a valuable weapon in a CFO’s cost-cutting arsenal.

The 2012 Sustainability & the CFO survey, conducted by Verdantix on behalf of DTTL and its member firms, found that some 53 percent of the CFO participants say their involvement in sustainability issues has become more pronounced in the last year, and another 61 percent expect their role to increase at least somewhat in the next two years (see figures 1 and 2).4 Their motivation is clear: 49 percent of the 250 CFOs surveyed—representing companies in 14 countries with an average of US $12 billion in revenue—see a strong link between sustainability performance and financial performance. And in this edition of CFO Insights, we discuss why sustainability has made such progress on the CFO agenda and outline how finance executives can extract even more value from their sustainability endeavors. 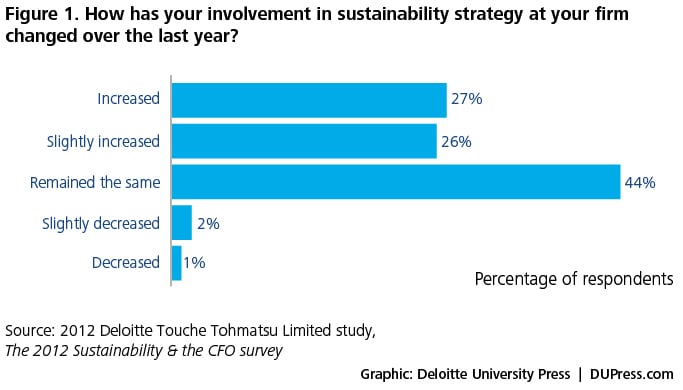 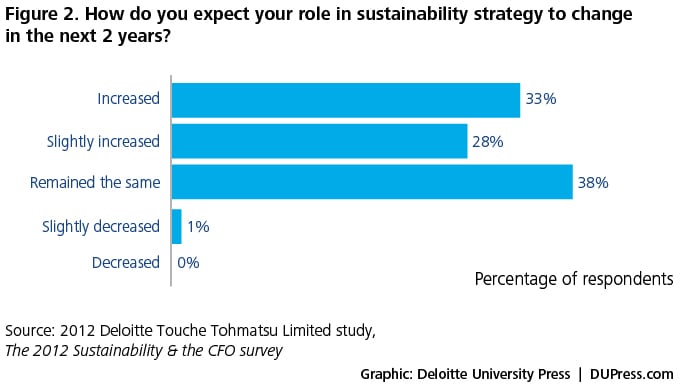 Behind the green gains

When the study was conducted a year ago, many CFOs had other priorities—or more accurately, imperatives, such as liquidity and sometimes even survival.5 And while there is no sole catalyst, there are several forces pushing sustainability to center stage.

For example, given the improved quality of solutions (think highly programmable energy-saving thermostats) and the visible success of early adopters (think Toyota and Johnson & Johnson),6 companies have the tools and the benchmarks for launching sustainability initiatives. At the same time, external forces are demanding that companies and CFOs embrace sustainability. Rating agencies are requiring more information regarding firms’ sustainability practices; indexes such as the Dow Jones Sustainability Index and the FTSE4GOOD index seek to rank firms’ corporate responsibility standards; and stakeholders, including investors and employees, continue to clamor for more nonfinancial information.

The main driver, however, is economic. In an era of high cash balances and careful investing, CFOs have recognized the benefits of initiatives that can be done with little capital and payback periods of two to three years. And as they strive to maintain margins in a low-growth environment, they are pushing those savings even more: Some 56 percent of CFO survey respondents, for example, are planning investments in telepresence and video-conferencing equipment in the next two years; 55 percent plan to build energy-efficient equipment; and 52 percent specifically cite plans to invest in data center efficiency equipment.

CFOs see further savings in taking a holistic view of sustainability. According to the survey, more than a third of companies have already implemented an organizational transformation in response to sustainability risks, and another 22 percent plan to do so in the next two years. What that means is that companies are trying to develop solutions that will make their business much more resilient going forward. Water use offers many possibilities. One leading manufacturer, for example, is using less water in its finishing process in an effort to guard against climate change-damaging cotton crops. And a major brewer seeking to reduce its water footprint has launched a water stewardship campaign to educate customers and employees in the process.

“To keep up with the current competition, it is important to keep on investing in sustainability, and eventually it can help us gain a competitive advantage.”-CFO, France

The implications for CFOs themselves are clear: According to the survey, CFO reporting authority for sustainability has increased from 17 percent last year to 26 percent, and in countries such as Australia (40 percent) and Germany (32 percent), it is much higher (see sidebar, “Sustainability around the world”). Moreover, 66 percent said they were “always” or “frequently” involved in driving execution of sustainability strategy in their organizations, and another 65 percent are involved in forming the sustainability strategy. And given the opportunities sustainability offers for both cost savings and growth, the increased responsibilities offer a bridge between the CFO’s steward and strategist roles.

Where CFOs’ sustainability responsibilities will increase will obviously depend on industry and circumstances. But the survey raises some common questions CFOs should be asking at this juncture: 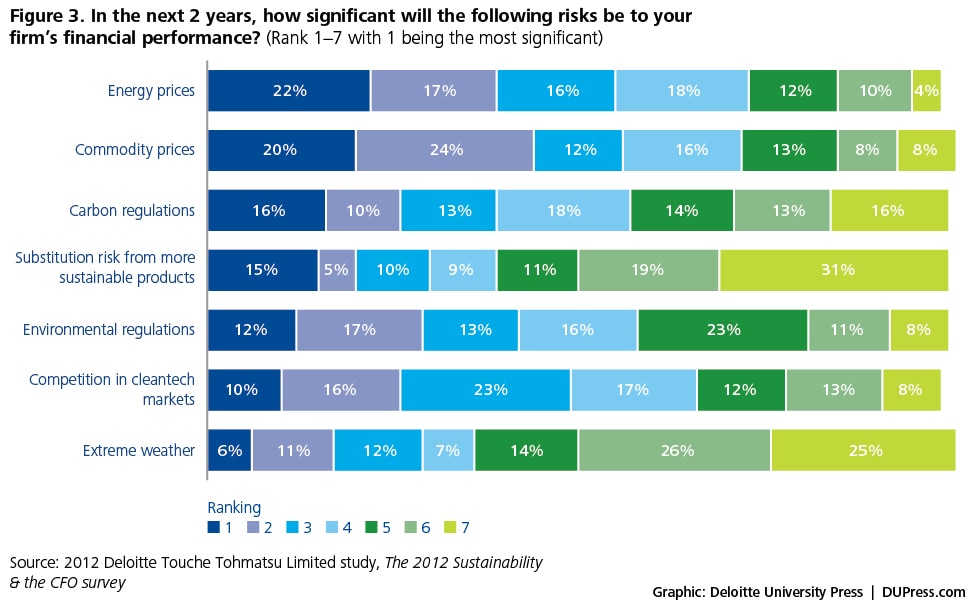 “To be profitable going forward, we have to invest in sustainability. It’s not an option but a necessity. If this is not done, the organization will not be able to survive in future years.” - CFO, South Africa

Sustainability around the world

The DTTL study interviewed finance chiefs in 14 countries and found a world of difference. Some of the specific variances include:

When you consider the amount of money being invested in sustainable business programs, it only makes sense that CFOs are taking on more responsibility in this area. In fact, according to Verdantix, the total spend on such programs by large companies (revenues of more than US $1 billion) in Australia, Canada, the United Kingdom, and the United States will reach US $60 billion in 2013.10

What those figures also give CFOs is the permission to integrate sustainability into their finance agendas. To do so successfully, however, requires the following actions:

Today’s CFOs are charged with sustaining the enterprise as opposed to the environment. But viewing the CFO’s role through the lens of sustainability ensures that a company’s long-term economic viability coincides with a balanced view of the environmental impact.

Sustainability: Why CFOs are driving savings and strategy has been saved

Sustainability: Why CFOs are driving savings and strategy has been removed

An Article Titled Sustainability: Why CFOs are driving savings and strategy already exists in Saved items