It’s all in the prep has been saved

It’s all in the prep has been removed

It’s all in the prep

Ethical tax is becoming increasingly topical as more of us become international citizens–living, working and investing in multinational jurisdictions and giving rise to more complex tax and reporting obligations. How will the Automatic Exchange of Information and Common Reporting Standard affect residents in the GCC?

When the Panama Papers were released, there was a worldwide uproar that resulted in the exposure of global leaders and high profile business executives–a deliberate naming and shaming of the wealthy for allegedly avoiding taxes. Those caught up in the tax scandal (including many compliant taxpayers) have suffered irrevocable reputational damage. With all the attention it has brought to the media and the now far-reaching implications of the worldwide focus on tax, we have to ask–what is ethical tax practice and how will this impact us in the future?

In layman’s terms, ethical tax refers to our moral duty to pay the right amount of tax to the appropriate tax authority. In line with current global trends, the Middle East is a melting pot of many nationalities owning assets around the world, meaning that residents of the region may have exposure to taxation in multiple jurisdictions.

Whether an individual or a company’s failure to pay the right amount of tax is deliberate or inadvertent, public awareness of the issue is growing. A global solution was requested by the G20 to combat tax evasion, and the Organization for Economic Co-operation and Development (OECD) has found what they consider to be the answer: the Common Reporting Standard (CRS).

To date, over one hundred countries worldwide have either signed or agreed to sign up for CRS, with many more to follow. In the Middle East region, the late adopter group will include the United Arab Emirates (UAE), Qatar, Kuwait, Bahrain, Lebanon and Saudi Arabia. Each jurisdiction will reciprocally exchange financial account holder information with the other CRS participating tax jurisdictions by late 2018.

CRS has been dubbed the “Global FATCA”. The Financial Account Tax Compliance Act driven by the Internal Revenue Service (IRS) in the United States was implemented around the world to flag and track U.S. citizens with foreign financial accounts. This was followed by a UK version of FATCA, which required the similar exchange of information between the Crown Dependencies, Overseas Territories and the UK. On a somewhat contentious note, the United States has not yet agreed to sign up to CRS and consequently some U.S. tax residents will not be reportable under CRS regulations.

It’s all in the prep

CRS is intended to reduce tax evasion but it should also act as a preventative measure to monitor individuals with foreign financial accounts (ensuring that taxable income is disclosed to the relevant authorities.) Many jurisdictions are also working on a reduction in the aggressive use of loopholes. While exploiting so-called loopholes may not be illegal, in some circumstances it may be considered unethical. For example, the UK government has drafted legislation that, when ratified, will allow HM Revenue & Customs (HMRC) to penalize those who are enabling taxpayers and facilitating abusive tax avoidance. With these and other measures in place such as BEPS (Base Erosion and Profit Shifting), the groundswell of support for the global ethical tax movement could soon unearth inadvertent tax discrepancies and result in tax evaders finding themselves with no place to hide.

The movement to close the tax gap is already in play. The early CRS adopters, as depicted in the graph on the previous page, are preparing to exchange information by September 2017 with the late adopters (including the Middle East participating jurisdictions) to follow in 2018. 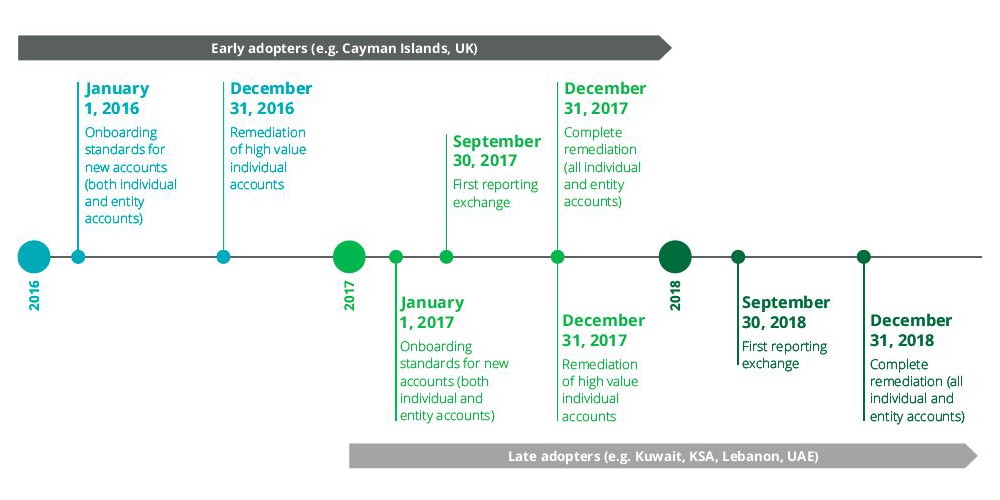 How will this impact the individual?

Most authorities, including those in the Middle East, have been slow in releasing official regulations. Based on the OECD minimum standards guidance it is certain that, unlike FATCA, there will not be any minimum threshold for reporting purposes implying that all account holders will be subject to CRS reporting. Individuals who are tax resident in an early adopter CRS jurisdiction with a financial account in another early adopter jurisdiction will have their information exchanged as early as September 2017.

What information will the financial institutions collect?

All new individual financial account holders (i.e. accounts opened after 1 January 2016 for early adopters, and 1 January 2017 for CRS late adopters) will be required to self-certify their tax residence status–unlike FATCA, which requires individuals to verify their nationality and place of residence. In line with OECD regulations, pre-existing accounts will undergo remediation by the financial institutions to ensure that the accounts have been correctly identified and classified based on all available information

How will financial institutions collect the information?

What information will be shared, and with whom?

Financial institutions will be reporting the following information to the local tax authorities, who will in turn reciprocally exchange information with the other 100+ participating CRS jurisdictions:

Some of the risks associated with failure of the individual to prepare for the implementation of CRS include:

Tax systems across the world are becoming increasingly more complex, with taxpayers, and the financial institutions with which they interact, subject to more and more regulation. It is easy to be co-operative when agreeing to account opening “Terms & Conditions” but it is imperative to be aware that almost all of us will be impacted when financial information is shared under CRS in the future. It is therefore important to be fully tax-compliant in all jurisdictions in which assets are held, or in which time is spent, and ensure that any local tax changes are reflected in the way in which financial and business affairs are conducted.

Carrying out a review of the information that will be shared by banks is an important first step, seeking advice if discrepancies are uncovered before disclosing the details to the relevant authorities.

Given the global focus on ethical tax and the amount of information that will be available to all tax authorities, it is important to get tax matters right first time. Rectifying mistakes and discrepancies can be more costly after the fact. Preparation is key.