Banking – The case for consolidation has been saved

Banking – The case for consolidation has been removed

Banking – The case for consolidation

Banks across the Middle East region are facing the pressure of tighter liquidity and increasing competition amidst a more challenging macroeconomic backdrop. These pressures are amplified in countries where public sector deposits have been withdrawn to shore up government finances weakened by lower oil prices. Set against recalibrated government budgets and higher compliance cost, revenue growth for the banking sector has been subdued and some banks lack the scale to compete effectively, leading to calls for consolidation.

A natural path towards consolidation is through merging, thereby creating a larger entity that is financially more robust and efficient, capitalizing on economies of scale and better diversifying the concentration risks that prevail in the sector. Other options include disposing of a segment of the portfolio that is no longer in sync with a bank’s strategic direction.

The picture in the UAE

With over 50 financial institutions set against a population of 11 million, both retail and commercial banking customers in the UAE have a wealth of choice, ranging from international and local lenders, specialist and commercial banks, and private banks.

At the top end of this saturated spectrum sit the large-scale banks, comprised of First Abu Dhabi Bank, Emirates NBD, Abu Dhabi Commercial Bank and Dubai Islamic Bank. These big four players had combined assets of US$435 billion in 2017. They have mostly adapted to the new normal in crude prices, resuming their growth trajectories with improvements in origination and declining impairments. Strong sovereign support, high capital ratios, better informed credit underwriting, along with more active management of risk, has ensured that these leading lenders continue to deliver profits despite a slowdown in regional GDP growth rates.

Beyond the familiar banks of Abu Dhabi and Dubai sit pockets of small- to medium-sized banks that have posted subdued credit growth, with a concentration on retail credit and small- to medium-enterprise (SME) portfolios, both of which have been subject to stress in the recent past, and that has impacted profitability.

SMEs, which account for approximately 90 percent of registered companies in the UAE, were hit hardest by the decline in crude oil prices, with cancelled contracts and late payments taking their toll.

Banks, in turn, witnessed a dramatic deterioration in the credit quality of their SME portfolios, registering non-performing loans of up to 25 percent in 2015, with smaller to mid-sized lenders hit hardest. Amid the protracted economic slowdown, most of these lenders have largely curbed unsecured—but potentially highly profitable SME lending—further impacting net interest margins.

The other main challenge facing lenders is the implementation of international financial reporting standard IFRS 9, which requires lenders to evaluate loans against a forward-looking expected credit loss model which is more robust than previous standards. Leading lenders with strong reserves are likely to absorb the impact of IFRS 9 without a significant impact on profitability, however, smaller lenders may be less prepared to withstand the change, resulting in higher provisions and elevated cost of risk. The introduction of Fundamental Review of the Trading Book (FRTB) regulations in the next few years will also place greater demand on banks, with potentially higher capital requirements to protect against their trading book positions.

Measures such as subsidy cuts and Value Added Tax (VAT) implementation have also dented disposable income and are likely to dampen the capacity for credit, hampering growth prospects.

The digitization of banking services is another spur for consolidation, as larger banks are better equipped to navigate and capitalize on these changes. Operating expenses are anticipated to increase owing to requisite investments in technology to drive digital strategies and improve operational efficiency—tasks made easier with stronger balance sheets.

As real estate assets continue to face downward pricing pressure, banks with a heavy concentration in the sector are also likely to report increased impairments as the impact filters through their books. Mergers in such instances may serve, inter alia, to diversify such risks and provide access to new platforms of capital. Pressure on funding costs is likely to diminish while banks’ ability to meet sizeable investments will be strengthened.

One saving grace is that banks will be well positioned to capitalize on the rising interest rate environment as they reprice their books against an environment of non-remunerated deposits.

To date, it has been the international banks that have been the most responsive and willing to act in the face of these challenges, many of which have either scaled down their GCC operations or severed ties altogether. However, other banks may benefit from taking stock and reassessing the sustainability of their bottom line in the wake of continually increasing competition.

Past mergers in the region have demonstrated the merits of tie-ups and borne fruitful results. The first banking merger in 2007 between Emirates Bank International and National Bank of Dubai to form Emirates NBD became a regional consolidation blueprint for the sector, with the creation of a powerhouse lender with the scale and strength to effectively compete in a dynamic market.

The landmark merger between National Bank of Abu Dhabi and First Gulf Bank in April 2017 created the UAE’s largest bank (FAB) and serves as a shining example and success story of the benefits from consolidation. Synergistic savings are expected to be generated from reduced branch networks, funding cost optimization and duplicated titles.

The scale achieved from such mergers has also led to improved liquidity management, enhanced profitability and reduced inefficiencies with better cost to income ratios. These institutions were afforded wider international reach and are now better placed to serve UAE corporates with international ambitions, as well as international companies operating in the country.

At the regulatory level, such mergers pushed the envelope with the regulators, leading to more robust supervisory and licensing frameworks.

Islamic lenders are particularly well positioned for consolidation as they tend to be smaller in scale and less able to compete with the larger conventional banks. In the GCC, the top four banks boast greater assets than the combined asset value of all Islamic banks in the GCC. Such banks may benefit significantly from mergers in a bid to level the playing field, particularly as the double-digit sector growth rates have all but subsided as the industry matures.

Banking - The case for consolidation 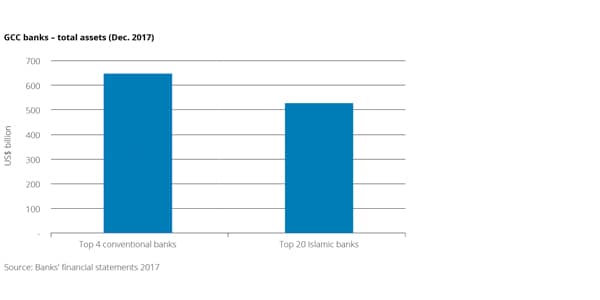 Notwithstanding the improvement in fortunes of many banks in the region in 2018, fiscal and geopolitical risks pose challenges, particularly in Qatar, Oman Bahrain. Oman and Bahrain have lower financial buffers comparison, Bahrain is even more intensely over-banked than the UAE, while geopolitical tensions have created additional pressures on Qatari lenders, all of which create fertile conditions for mergers and acquisitions.

While the banking industry is characterized by strong fundamentals, with dominant lenders more resilient to market forces and weaker asset quality, the competitive landscape, macroeconomic backdrop, altering regulations and changing consumer behavior will have a far-reaching impact, particularly on mid-sized and smaller lenders, and the case for consolidation remains compelling.

In the UAE and Bahrain, sections of these markets are ripe for a shake-up. Smaller or struggling lenders that fail to find savings, and less able to tap markets for fresh capital, may find themselves swept away by a wave of consolidation. These banks would do well to reconsider their strategy and act now in order to remain competitive.