Rise of the creative robot has been saved

Rise of the creative robot has been removed

Rise of the creative robot

As machine learning (ML) paves the way to becoming a game changer in the global economy, we expect the media sector to accelerate its investment in ML solutions to become part of this technological disruption. Globally, ML is already touching the media sector all across its value chain—from content creation, to content consumption, to revenue generation.

ML is already being actively used for targeted content generation—a case in point being the success of Netflix’s own-produced TV series, including its first blockbuster hit, House of Cards, which was extensively driven by ML and data science. Increasingly, Hollywood producers are beginning to use Artificial Intelligence (AI) at various points of the creative process. Starting with the script read, which remains the traditional first gate in the movie business, there is an increasing case of assessing the potential success of a script using AI tools and companies such as Scriptbook, instead of relying solely on human judgment. Secondly, digital videos have enabled studios to gather a massive amount of data on the reactions of users to content, using sentiment analysis on social media posts and comments. These insights are far greater and meaningful than the traditional audience surveys. Retention data for instance, captured by YouTube and other digital video platforms, helps content producers understand how to avoid losing the audience’s attention in the middle of a clip (e.g. by avoiding the use of ending words such as “finally”.)

Rise of the creative robot 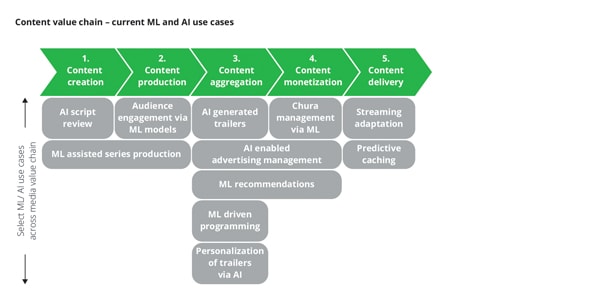 In the Middle-East, the Ramadan grid sees the production of over 30 new series every year, predominantly Arabic, with programming reaching a peak of around 80 percent scripted content (versus less than 50 percent the rest of the year.) Considering the high competition for eyeballs between the main FTA (Free To Air) channels, coupled with the increased monetization potential during this period,1 it is critical for channels and studios to get it right. Building on the Netflix experience and considering the relatively standardized format of series and audiences, there is a strong case to use machine learning to support the production of Arabic dramas and comedies for the holy month.

Another early stage application of machine learning to media has been the creation of trailers. Shorter, more self-contained, and abiding to general guidelines (length, voice over etc.), trailers are obvious candidates for creativity automation. In 2016, 20th Century Fox released the trailer for “Morgan”, a horror movie developed using machine learning. The ML system was trained on scenes from over 100 horror movies and recommended 10 moments for the trailer. While the movie was a relative box office miss, the trailer was a successful proof of concept. Netflix is reportedly testing the use of personalized AI-enabled trailers to tailor the marketing of their new shows to the individual taste of viewers. With vast volumes of data on the behaviors of their 100 million plus users, Netflix is able to use a range of machine-learning algorithms to tweak and improve the way it presents its content.

Applying this concept to the way broadcasters currently operate in the Middle East, there is notable potential, not only for greater audience engagement, but also for strategic cost optimization. Currently broadcasters tend to still employ a large number of creative services staff dealing with on-screen graphic, visuals and fillers, including trailers. Taking the lessons learnt from trailer creation via ML, a creative process that used to take weeks could be reduced to less than 24 hours. The resources could then be reallocated to more value adding tasks including core content creation or programming.

Programming is another area where broadcasters should greatly benefit from ML. In the same way that Netflix uses ML and algorithms to push content recommendations to customers, or that Spotify’s partnership with Accuweather aims to adapt music recommendations to local weather, we see the linear TV grid becoming much more dynamic and ML-based in the near future. In the related adjacent market of mobile stickers (emoticons), the company Emoji actually analyzes the message content, key words and time of the day to suggest alternative stickers to the user from the standard library.

In a region rich in geopolitical events, broadcasters have always tried to link their content to current affairs—over the years for instance the Syrian war became a backdrop of many Ramadan TV dramas—a case in point is the release, last Ramadan, of MBC’s “Black Crow”. Now, the opportunity is to tailor dynamically the programming of content on a daily basis, following a number of factors including current events or weather.

ML could probably have its most potent application for regional broadcasters in the optimization of their ad inventory management. What is otherwise known as traffic management has been more of an art than a science for many Middle East broadcasters, with many of the activities and decisions left to manual interventions and Excel spreadsheets. Yet, for a FTA broadcaster, effective traffic management can have a very significant impact on yield maximization. Introducing ML in ad management would mean incorporating years of data and dozens of variables, ranging from time of the day, content type (potentially down to moments), social sentiment or financial positions with the MBUs (Media Buying Units.) Extending the concept beyond ad management, ML and analytics could help broadcasters more accurately assess the real value of their ad slots for brands and MBUs. Already, many broadcasters are using social sentiment analysis (e.g. Tweets on specific programs) to gather feedback on the content they air. Going forward, with initiatives such as the Private Sector’s Open Data that some GCC governments are contemplating, you could think of brands in the region opening up their inventory data to broadcasters or MBUs to assess near real time impact of an ad on buying behaviors. In a region where audience measurement remains a key pain point, the dialogue could shift from audience share to return on investment.

Lastly, and as the ultimate stage of the content value chain, ML is used by over-the-top players such as Netflix to optimize their content distribution over a wide variety of quality and throughput of broadband networks. This is of particular relevance in the Middle East where the quality of the broadband infrastructure varies from good (in most GCC markets) to developing (in most other countries). Netflix is using ML to more accurately predict network quality, combining temporal pattern recognition with various contextual indicators. This allows an adaptation of content quality during playback (High Definition etc.) to the underlying network quality. Pushing machine learning models one step further, Netflix is also looking to improve the streaming experience by predicting which movie or episode a subscriber will play next in order to cache it on the device (“predictive caching”.)

Overall, in a regional sector that has been battling with commercial viability issues for years, ML could play a critical role to help broadcasters engage better with viewers, optimize their ad revenues and streamline their costs. However, the path from test lab to live environment is a sinuous one—less than 20 percent of data models produced by data scientists are actually deployed by data engineers. Yet, ML is now moving out of the shadows of ideas and vision to the real world of application, usage and revenue generation, with some first successful use cases in media. The regional media industry should be running to try and catch this boat on time.