Changing mindset has been saved

Changing mindset has been removed

How can competitiveness accelerate economic growth?

Investors around the world are exploring destinations that maximize returns or create cost efficiencies via: proximity to markets, access to technology, finance or natural resources, or the cost of doing business. To improve country ranking and the overall business environment in a way that successfully and sustainably maximizes impact and returns on the economy, three steps can be taken to introduce a competitiveness mindset that wins in regional and global markets: collect/define, evaluate, and execute reforms. In this article we review what it takes to be competitive and how the Kingdom of Saudi Arabia launched the National Competitive Center to rise up the competitiveness ladder.

What makes an economy truly competitive?

Competitiveness at its core includes increasing economic freedom and overall quality of life. Countries that do not adopt the Competitiveness Model may increase their rankings in international reports, but not the prosperity of their citizens, as measured by the Legatum Prosperity Index (LPI), which measures national prosperity based on economic and social well-being. As shown in Table 1, BRIC countries (Brazil, Russia, India, China) experienced super-heated economic growth in the late 1990s and early 2000s that favorably impacted their rankings in major competitiveness reports. 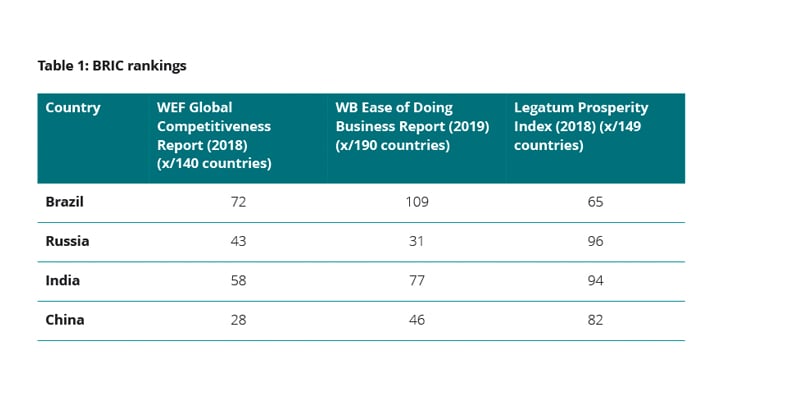 However, their momentum slowed down and then declined after 2010, indicating that their competitiveness did not lead to prosperity because their reforms did not truly reinvent their economies. Their latest rankings in key competitiveness-oriented reports show that their competitiveness models have become impediments to sustained growth. While one may rightly argue that rankings in reports are not true indicators of national competitiveness, they do provide a lens through which one can examine the factors that drive these rankings. In contrast to BRIC, some of the world’s most prosperous countries continue to make major gains in economic growth due to constant reinvention. This is illustrated by Table 2, which highlights rankings in major global competitiveness reports. These rankings reflect an approach to competitiveness that has established a pattern of ongoing increase in the quality of life and economic livelihood of their citizens.

In the GCC region, countries have improved competitiveness according to key metrics and rankings in global reports, but structural, institutional and policy deficiencies continue to be areas that require additional focus. The challenge will be enabling these countries to sustain competitiveness through a combination of strategy, good governance, business-friendly reforms, and innovation that leads to ongoing reinvention and strategic course corrections. Within the Middle East, the governments of countries like Egypt, the Kingdom of Saudi Arabia (KSA), the United Arab Emirates (UAE) and Morocco, are designing and investing in programs with the sole purpose of increasing national rankings across multiple indexes. What are economic indicators and how do they measure competitiveness?

International competitiveness experts understand the value of analyzing data, quantitative and qualitative (explained in Table 3), as a way to measure competitiveness. 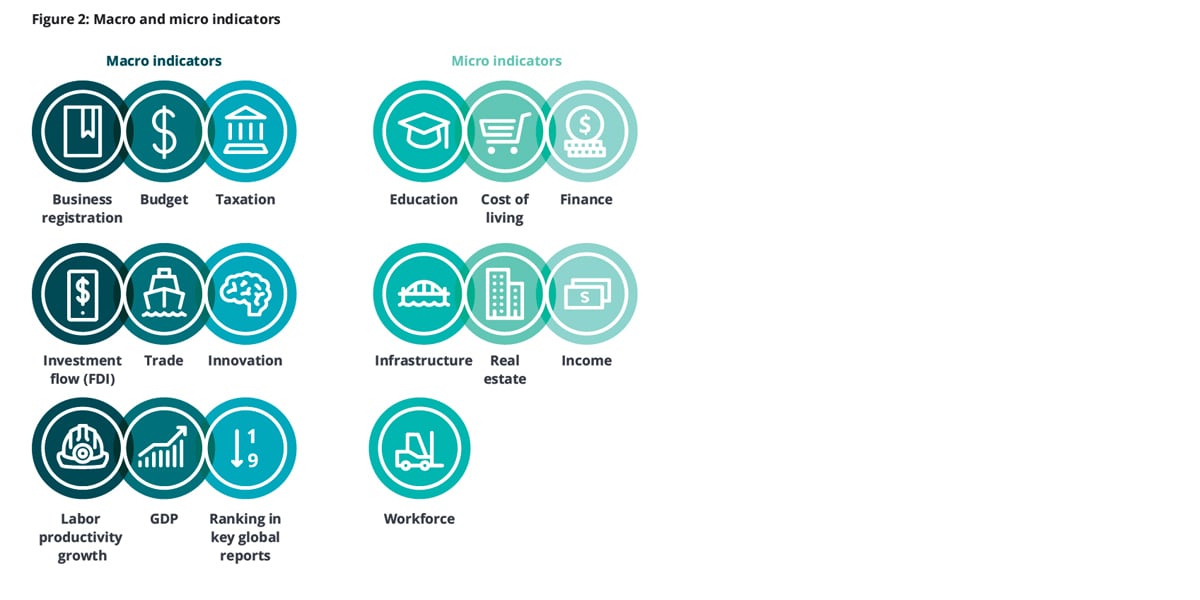 What are the different approaches to improve regional competitiveness within a country?

The ability of countries to track, analyze and thus understand regional competitiveness is more compatible with the endogenous growth theory that was developed by Nobel prize-winning economist Paul Romer and others. This theory postulates that accumulation of knowledge generates increased returns. Thus, enhancing regional competitiveness occurs when leaders harness strategy and resources that lay the foundation for sustainable regional competitiveness. This requires a rethinking of Myrdal’s more spatially-oriented approach to instead focus on the broader areas of people and institutions, thus adopting a “spatial blindness” approach. Figure 3 provides an overview of these theories of regional development. Also included are examples of countries that have utilized each concept.

What is the successful model that the Kingdom of Saudi Arabia (KSA) adopted to deliver competitiveness?

On 24 October 2019, KSA officially launched the National Competitiveness Center (NCC) accompanied by the World Bank’s announcement on KSA’s Ease of Doing Business ranking, which witnessed an exceptional improvement moving up 30 places to rank 62nd globally. A total of 62 reforms were submitted, of which 28 were accepted, helping enhance KSA’s ranking in 9 out of 10 pillars. The NCC consists of four main units (summarized below) that work together to evaluate and monitor competitiveness and implement the necessary reforms.

The Kingdom’s ranking in the IMD World Competitiveness Yearbook improved immensely, moving up 13 places to reach 26th worldwide. The Kingdom ranks 7th within the G20 group and 16th within North Africa and Europe.
The Global Competitiveness Report was issued at the beginning of October of
2019 by the World Economic Forum, and presented the advancement of the Kingdom by 3 places to become 36th globally. It ranked 11th within the G20 group and 4th within Europe and North Africa. Many reforms related to the “Women, Business, and Law Report”, published yearly by the World Bank Group, such as the prevention of discrimination between men and women in the workplace, the prevention of the dismissal of women from work during pregnancy, and an equal retirement age between men and women were also implemented. The NCC also analyzed and prepared recommendations for the results of a survey performed with 600 local and foreign investors, aiming to address common challenges in economic sectors. The NCC has proved that it can deliver results and play an instrumental role in achieving the ambitious plans set by Vision 2030 on a regional and global scale.

In conclusion, the GCC region is aiming at diversifying and growing its economy to reduce dependency on oil, create better employment opportunities and induce long-term prosperity all around. These goals can be achieved by introducing a mindset of competitiveness, which creates the foundation for a sustainable economy. Combining competitiveness with a strong and diversified economy contributes to the positioning of these countries as key destinations to do business on a global level. In turn, because the competitiveness of an economy is indelibly linked to prosperity for its citizens, the countries will also very likely experience growth and affluence on a national scale. What remains to be seen is how things play out in terms of existing plans, given the altered nature of the global business environment that has risen as a result of the widespread COVID-19 virus.