The hammer of Economic Substance: Will the shell crack?

Perhaps it all began when the worlds of commerce were largely distant to each other and businesses were about touch and feel, brick and mortar. Geographical barriers divided economies and trade was largely opaque due to the unavailability, or slow exchange, of information. What followed cannot be deemed as anything less than a renaissance of the global economy: the rapid advent of information technology and globalization. Physical barriers and distances were no longer an impediment.

Businesses had to become agile. Emerging economies and countries at large were free to offer incentives to attract trade and investments, one of these incentives being significantly low or no tax on income. Technology enabled businesses to shift operations, capital and profits based on these incentives. As a result, a mismatch occurred between the location where economic activities were actually performed and value was created, and where profits were actually parked and taxed.

The shifting of profits to jurisdictions offering lower or no tax rates to multinational enterprises (MNEs), and the harmful tax competition it engendered, was addressed by the Organization for Economic Co-operation and Development (OECD) as far back a 1998 in its publication Harmful Tax Competition: An Emerging Global issue. To further the work of the OECD, the Forum on Harmful Tax Practices (FHTP) was created. The objective of the publication was to develop measures to counter harmful tax practices with respect to geographically mobile activities such as financial and other
services, including the provision of intangibles.

What followed was the OECD’s Base Erosion and Profit Shifting project (BEPS), which came up with 15 point action plan. Action 5 states that:

- The goal of this action is to secure the integrity of the tax system: to address tax issues applicable to mobile activities that unfairly erode the tax bases of countries and potentially distorts the location of capital and services.

- The work is not intended to harmonize income tax nor to dictate appropriate tax rates to any country. It is intended to reduce the distortionary influence of taxation on the location of mobile financial and service activities and encourage free and fair tax competition in order to level the playing field.

As part of this task, it was essential to understand whether a country offering tax incentives would qualify as a “preferential regime”. In order for a country to be reckoned preferential, it must offer some form of tax preference in comparison to general tax principles, such as a reduction in tax rate. The 1998 reports of the OCED laid down key factors that determine whether a preferential regime was potentially harmful. These included:

- No or low effective tax rates;

- Lack of effective exchange of information;

In general, when a regime offers a combination of zero or low effective taxation, along with one or more of the factors, it may qualify as potentially harmful.

A jurisdiction was considered as “tax haven” if: (a) it imposes none or only nominal taxes; (b) lack of effective exchange of information; (c) lack of transparency and (d) the absence of a requirement that the activity was substantial.

The FHTP additionally considers two key priority areas, one being a substantial activity requirement and the other related to transparency through information exchange on rulings related to preferential regimes.

For a country qualifying as a preferential regime, Action 5 requires that it should manifest substantial activity, the idea being to align substance with taxation, and to act as a deterrent to artificially shifting profits from the countries where value was created. Where the objective is solely or almost solely driven by tax considerations, the hammer of substantial activity test may crack open the shell covering companies in such jurisdictions. Under BEPS Action 5, for countries that qualify as harmful tax regimes, guidance is provided to meet the substantial activity test for two categories:

b) Activities for the exploitation of IP assets. 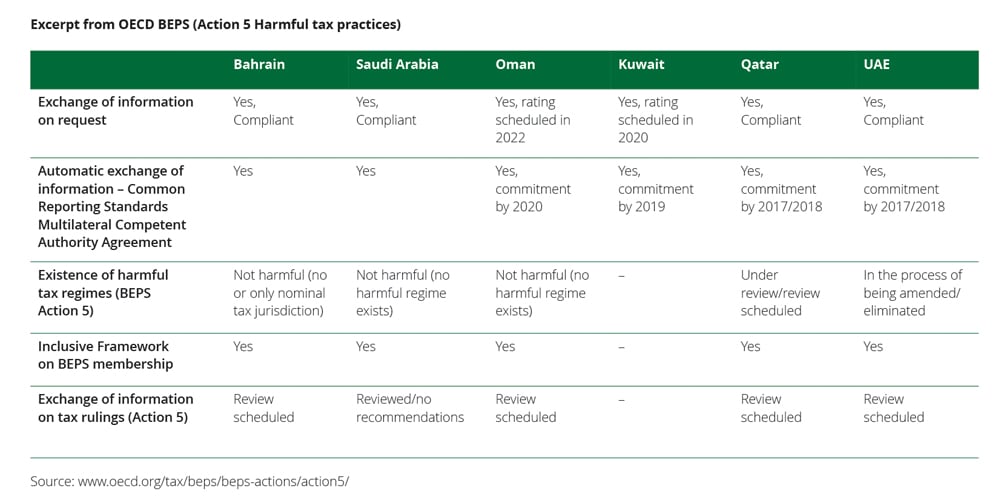 Under the non-IP income category, jurisdictions with none or low effective tax rates are required to introduce legislation relating to core income-generating activities for each relevant business sector, as well as ensure that such activities are undertaken by the entity—including the deployment of requisite manpower and commensurate amount of expenditure—and implement transparent mechanism to ensure compliance. From a Middle East perspective, the adoption of Economic Substance regulations by the United Arab Emirates on 30 April 2019 might be the most apt example of how economic substance requirements were integrated locally. It is also pertinent to note that the European Union, pursuant to the adoption of these regulations by the UAE, removed it from its blacklist of countries deemed to be acting as tax havens.

Examples are also available where two sovereign states have negotiated tax treaties based on successful substance tests. This has been effected through the insertion of a Limitation of Benefits clause under the tax treaty, which can include an operational expenditure threshold to substantiate economic activity. OCED BEPS Action 15 on Multilateral Instruments also prescribes a Simplified Limitation of Benefits clause and Principal Purpose Test.

Under the IP income category, the substance requirement is through ‘nexus approach,’ which is formula-driven.

The OECD BEPS initiative and its footprint are becoming increasingly visible in the context of the GCC as tabulated below.

Rallying forward, given the maze of ever-increasing tax treaties and likelihood that the tax system would be adopted by countries in order to avoid being classified as tax havens or potentially harmful preferential regimes, the importance of economic substance of an entity is paramount. Given the dynamics of international taxation and their development, it becomes increasingly crucial for any entity to look at substance and value creation while choosing a jurisdiction for its operation, rather than only tax considerations.

This is particularly relevant from a Middle East standpoint, as we have seen significant tax reforms in Middle Eastern countries in the last few years. MNEs using countries with benign tax regimes as HoldCo structures would need to re-evaluate structures and work on substance requirements, that would need to be demonstrated at an opportune time.