Deloitte's Corporate Finance practices recognized by Mergermarket as the most active M&amp;A advisor in the world has been saved

Deloitte's Corporate Finance practices recognized by Mergermarket as the most active M&amp;A advisor in the world has been removed

An Article Titled Deloitte's Corporate Finance practices recognized by Mergermarket as the most active M&amp;A advisor in the world already exists in Saved items

4 March, 2019 – Mergermarket, an Acuris company and a leader in M&A intelligence, has ranked Deloitte's global Corporate Finance practices as the number one most active M&A advisor in the world, based on deal volume, in its latest Global & Regional M&A Report 2018. 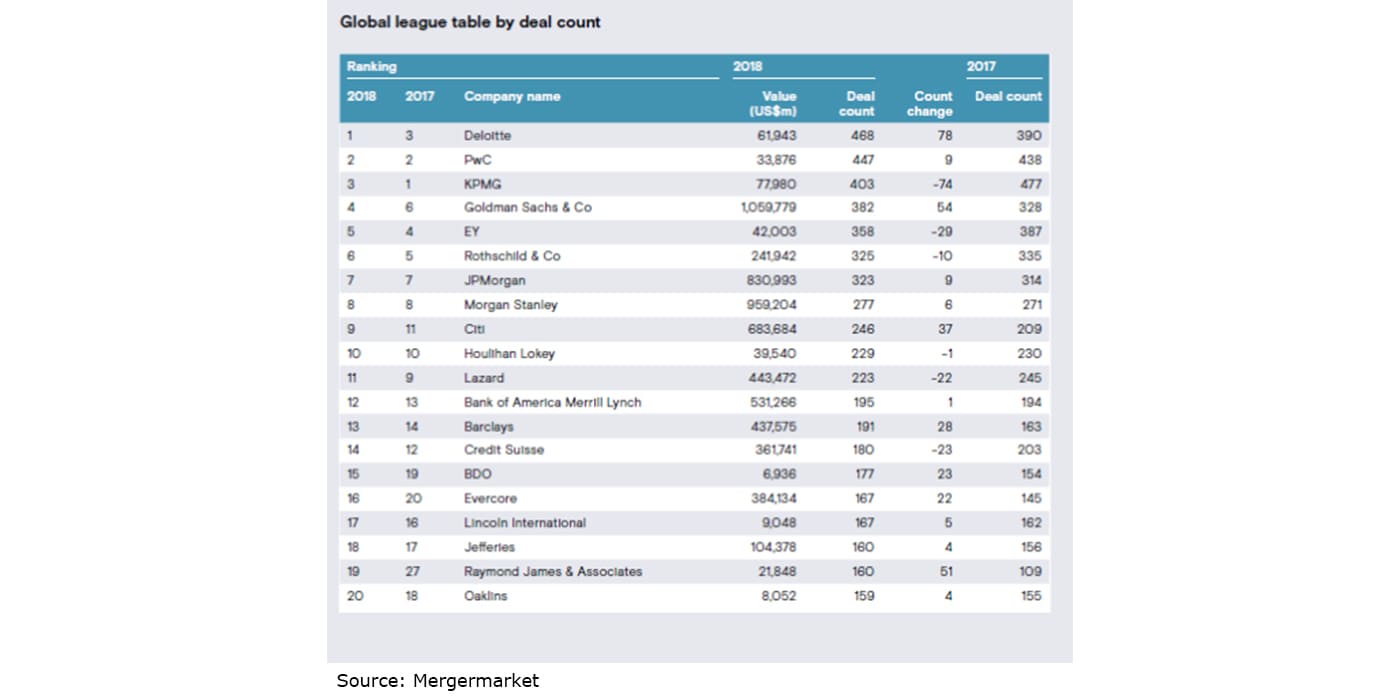 According to Elizabeth Lim, Research Editor, Americas at Mergermarket, “With so many market-moving factors fluctuating throughout the year, mergers and acquisitions have understandably had headwinds in late 2018. Intensifying trade tensions, political instability, and increased regulatory scrutiny lowered the number of deals struck over the year, though deal values remained relatively high. These deals reached US$3.53 trillion worth of activity, ranking 2018 as the third-largest year on Mergermarket record by value, with the average deal size increasing to the second-highest total value on record with US$384.8 million.”

Despite an overall global decline in the level of M&A activity, Deloitte advised on 468 transactions that closed in 2018, which was up 20 percent from 2017. Additionally, over 50 percent were cross-border, reinforcing a marketplace reputation for global scale and comprehensive M&A advisory offerings.

“Deloitte's global Corporate Finance practices are honored to receive this accolade. We have heavily invested in our people and offerings over the past few years, and we are increasingly integrated with Deloitte’s end-to-end M&A offerings across the world,” says Phil Colaço, Deloitte Global Corporate Finance leader and CEO of Deloitte Corporate Finance LLC. “This investment has started to pay dividends with a growing share of cross-border transactions and deep collaborations with our colleagues focused on delivering superior services and deep sector expertise as clients navigate an increasingly complex business landscape.”

“Combine that with market trends towards a more global M&A marketplace, and record amounts of capital, and we’re seeing tremendous opportunity in the middle market,” says Phil.

“We are proud to be part of the leading global corporate finance practices and extending the global services to the Middle East. The global M&A trends are firmly recognised in the Middle East where we continue to see cross border transactions drive mid-market M&A,” says Robin Butteriss, Partner and Head of Deloitte Corporate Finance Advisory in the Middle East.