Niche no more: exceptional growth rates and even more potential – esports excites millennials has been saved

Niche no more: exceptional growth rates and even more potential – esports excites millennials has been removed

2 September 2019 - Over the last few years, the European esports market has experienced enormous growth, with total revenues of approximately EUR 240 million in 2018, leaving behind the notion of being a niche product. With an estimated global fan base of 380 million people (86 million in Europe), esports has become an interesting opportunity for both endemic and non-endemic brands, as shown in Deloitte’s report Let’s Play! – The European Esports Market in cooperation with game, the association of the German games industry.

“As the Middle East region adapts to the future of entertainment, it will likely witness the emergence of eSports as a genre of widespread interest as is the case in Europe”, explains Emmanuel Durou, Partner and Technology, Media and Telecommunications Leader, Deloitte Middle East. “It targets a younger audience that traditional media is afraid of losing and fits the demographic balance in the region with a high proportion of Millennials and a large gaming market with 60 million gamers across the Middle East. We see regional growth being driven by young demographics, local-based events, regional gaming talent, broadcasters/sponsors entering into the market and broad government support.” 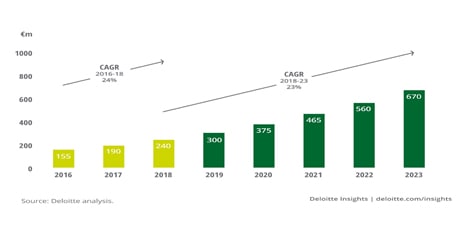 “What started as a niche entertainment product has become more and more popular over the years, reaching a significant audience”, explains Kristin Banse Manager Marketing & Esports at game. “The majority of esports fans are millennials aged between 21 and 35, a target group many companies try to reach and connect with. Esports offers the opportunity to engage with them to every company open enough to try it.”

Increasing revenues will remain over the following years, with advertising and sponsorship estimated to account for 60% of the industry’s overall revenue by 2020, primarily as a result of the growing interest of both endemic and non-endemic brands reacting on the increasing interest esports generates on younger generations.

Furthermore, the potential increase of the esports audience will have additional effects. First, the increasing number and variety of live events will positively boost the merchandise and ticketing revenues. In addition, media rights are expected to increase by almost 500% from 2016 until 2020 in the European esports market.

Revenue and audience growth in the European esports market will not come alone, and as more and more brands will seek a chance to be engaged with the industry, innovation and change are expected to affect the market, especially on traditional media. Live streaming and Video-on-Demand offerings, driven by the desire of the public to decide when and what they want to watch, are the preferred ways to watch esports (40% of the audience), next to 27% watching on traditional TV.

Even though audiences are still too small to be granted some prime time, there are good options to monetise esports interest, either by advertising or by the creation of exclusive content that targets the more loyal, more dedicated fan base.

One of the key metrics to measure the success of any business is the interest it awakens on investors, and the European esports market is increasingly performing well in that area. Last year set a record on that regard, with an investment volume of about EUR 3.9 billion and 68 M&A transactions recorded worldwide.

“If, as assumed on Deloitte’s report, the global audience continues to grow and attracts further commercial partners, then significant investor interest in esports can be expected, boosting the number of transactions as well as the investment volumes of M&A activities in the European esports market”, explains Stefan Ludwig, Partner and Head of the Sports Business Group at Deloitte.

Considering those factors, esports is expected to further develop in terms of revenues as well as organisational and corporate governance, leading to further growth into the direction of mainstream character. “In order to do so, fostering a collaborative environment between all stakeholders could be the best way to proceed, and will set up an innovative precedent on how the market could evolve in the future”, concludes Stefan Ludwig.