A platform to make a positive impact

Tell us a bit about your background and the social impact work which you are involved in.

I joined Deloitte Ireland’s Operations Transformation team as a graduate in 2017 after completing an MSc in Development & the Global South at University College Dublin. I come from a large, rural town in south-east Ireland which doesn’t have access to the same facilities that other places in our country do. This context has developed my passion for tackling inequality and providing opportunities to empower those in less fortunate communities.

I have partnered with our Corporate Responsibility team to create a programme which teaches team building skills to disadvantaged communities through the medium of sport. This ranges from tag rugby at primary schools in inner city Dublin to quarterly football matches for young offenders in the Irish prison system. This has enabled our people to reach communities which may be regarded as ‘invisible’ by wider society.

How did you come to hear about One Young World, and what sparked your interest in attending?

I first heard about One Young World from my colleagues Róisín Fitzpatrick and Niall Kelly who attended the summit back in 2019. My interest started to build when we received an email inviting us to apply to become a Deloitte delegate at the next event. I read up on the One Young World summit and felt that it would be an event which would give me a platform to build a network of people who want to make a positive impact in our world. From there, I pulled together an application and submitted it to the selection panel. Little did I know that it would be another 18 months before I heard back due to the pandemic! 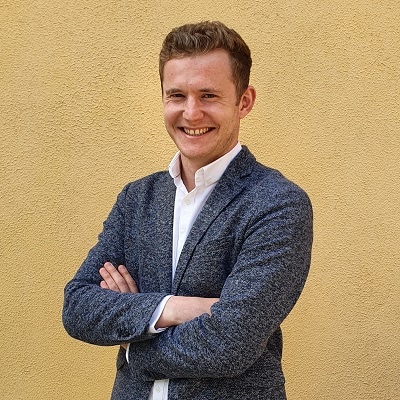 Jonathan attended the One Young World summit virtually this year.

This year’s ceremony was held in a hybrid format. How did you find that? Were you still able to meet and collaborate with other delegates online?

The hybrid format had its pros and cons. On the positive side, it enabled delegates to connect on a one-to-one basis which was really special. This meant that no one was crowded around a table trying to get a word in, and no one was shy about speaking up.

However, the hybrid format wasn’t without its challenges, and  there was definitely a bit of an unintentional divide between the virtual attendees and those in Munich. For example, the guests in Munich could feel the energy of the summit and had opportunities to connect with the speakers, whereas virtual attendees did not. The biggest FOMO came about when pictures of the crowd enjoying themselves showed up on screen, or the when presenters asked those in Munich if they enjoyed the beer gardens!

The screen time was also very tough, but the OYWs app meant that I could enjoy the sun and listen to the conference on my smartphone when I need a break from the desk. I really felt for some of my Deloitte colleagues from other parts of the world who either had to stay up way past their bedtime or wake up at a crazy hour!

Although I understand why it had to be held in a hybrid format, I certainly hope that this will be the last year it will be held in this fashion and that the Deloitte delegates who attended digitally will get to experience the One Young World Summit in person 😉

I found the workshops a really enjoyable aspect of the Summit. They provided a great platform for networking with a larger group of people and also an opportunity to have an in-depth discussion on the key challenges facing the world.

Was there a part of the summit you particularly enjoyed?

I found the workshops a really enjoyable aspect of the Summit. They provided a great platform for networking with a larger group of people and also an opportunity to have an in-depth discussion on the key challenges facing the world.

As a huge sports fan, I was delighted to attend a brainstorming session facilitated by Bayern Munich on how clubs can have an impact in the global community. My breakout group was tasked with discovering ways in which Bayern could tackle climate change and we came up with some great solutions, including offsetting their travel through carbon credits, a rewards scheme for fans who use public transport and planting a tree for every goal scored by the team. However, my favourite solution came from a delegate who had no knowledge of football, but suggested that they educate their academy teams on climate change, extinction and sustainable practices to encourage them to drive electric cars when they become superstars. This was a simple yet effective solution and shows the value of having a diverse group from different backgrounds – as opposed to just a room full of ‘experts’.

The other workshop I attended focused on how businesses can lead change both internally and in the global community. This workshop gave me an insights into the internal challenges that businesses are facing, especially in relation to diversity, social impact and putting purpose over profit. It also became clear to me that Deloitte Ireland leads the way in terms of the Corporate Responsibility work our firm is involved in. For example, so many delegates from the world’s leading businesses informed me that they didn’t have a Corporate Responsibility department or were discouraged from getting involved in social impact work because their leadership saw it as a needless cost base. However, I am glad to say that the delegates attended this workshop with a view to change such a way of thinking in their organisations. On this note, I have to say that I am proud to be part of a firm which backs their teams to get involved in Corporate Responsibility and values the impact we can make on communities both at home and abroad.

Who did you think were the most powerful speakers?

The summit had such a broad range of powerful speakers and moving topics. I admired BP’s CEO Bernard Looney coming to One Young World and outlining his organisation’s plan to become a leader in renewable energy. He also called on other organisations to come to the table with BP and work together to become “Greening Companies”. However, I was particularly struck by three speakers who had been forcibly displaced due to regional conflict.

Sara Mardini’s harrowing story about her journey to Europe reaffirmed my belief that we need policies in place to help refugees rather than put them through more suffering. Sara and her sister Yusra (competing at Tokyo 2020) are strong swimmers and had to tow their sinking dinghy with 40 people on board for 3 kilometres until they reached Greece. Then there was Rez Gardi, a citizen of Kurdistan who fled her homeland for New Zealand in the 1990s and was told by a careers counsellor that “law school would be too difficult for someone like you”. Rez is now a Human Rights Lawyer with a degree from Harvard. Finally, Nujeen Mustafa told her story of travelling from Aleppo, Syria to Europe in a wheelchair and called on global powers to provide facilities and opportunities for refugees with disabilities.

This topic particularly stood out for me because I don’t believe that the EU is doing enough for refugees trying to reach its shore. Refugees don’t want to leave their homeland; they are forced to. As a country whose people were welcomed across the world in our time of need in the 1840s, we need to campaign for the bloc to do more.

What did you learn from the experience? What difference did it make to you personally?

I have learned that there is a collective frustration among young people about the lack of action from our elected officials and leading businesses on addressing threats to the future of our planet. Businesses and governments are the agents of change, but many continue to pursue unsustainable practices. A Ugandan delegate, Vanessa Nakata, summed up the priorities of the powerful when she remarked “We can’t eat coal or drink oil”.

However, the One Young World summit has also given me plenty of hope because I know that the network which I have built from summit will no longer stand by and watch the rich get richer and the planet get sicker.

I have been encouraged to pursue my passion of addressing inequalities in access to education and career opportunities for less fortunate communities after hearing business leaders’ call to diversify their workforces by hiring from outside of the ‘top’ schools and colleges. Business can’t adapt and make purposeful changes unless there are a broad range of perspectives and backgrounds at the table. The Chief Talent Officer from a large financial institution echoed this point when they said, “Inclusive teams generate the most innovative solutions”.

For us, as one of Ireland’s most powerful and respected businesses, we can no longer turn a blind eye and say “It’s out of scope”. Being a leading business comes with the responsibility to bring about purposeful change on a national and international level. Let’s act on it now – or otherwise we face be held accountable for our inaction by future generations.

A platform to make a positive impact has been saved

A platform to make a positive impact has been removed