Faced with unprecedented uncertainty, businesses now more than ever need to be resilient, agile and future-focussed. Read on for the findings from the 2020 Global Technology Leadership Study

As COVID-19 ushered in an era of unfamiliar challenges and unexpected risks, the findings of this study is especially important. Kinetic leaders can drive meaningful transformation and can help organisations navigate the new era of volatility. And as the pandemic accelerates the timeline for technology adoption and business digitisation, it presents tech leaders with an unprecedented opportunity to help shape the future of the business.

Looking across the global dataset, we identified leading companies across three specific dimensions – they were clear and aligned in their technology and digital vision, they had a responsive tech function, and they outperformed their competition. These companies have a different operating rhythm and invested differently. We call them ‘tech vanguards’. Organisations who were identified as tech vanguards are outperforming their competitors across seven measures of success: profitability, revenue growth, stock performance, digital maturity, innovation, customer engagement, and employee engagement.

Tech vanguards are nearly four times as likely (31%) as their less mature counterpart, known as baseline organisations, (8%) to say their technology function is transformational in its approach to shaping business strategy. For more than half of tech vanguard organisations (52%), transformation efforts are focused on implementing new business models, compared to efforts by the majority of baseline organisations (52%), which are more likely to focus on revamping existing operating models. 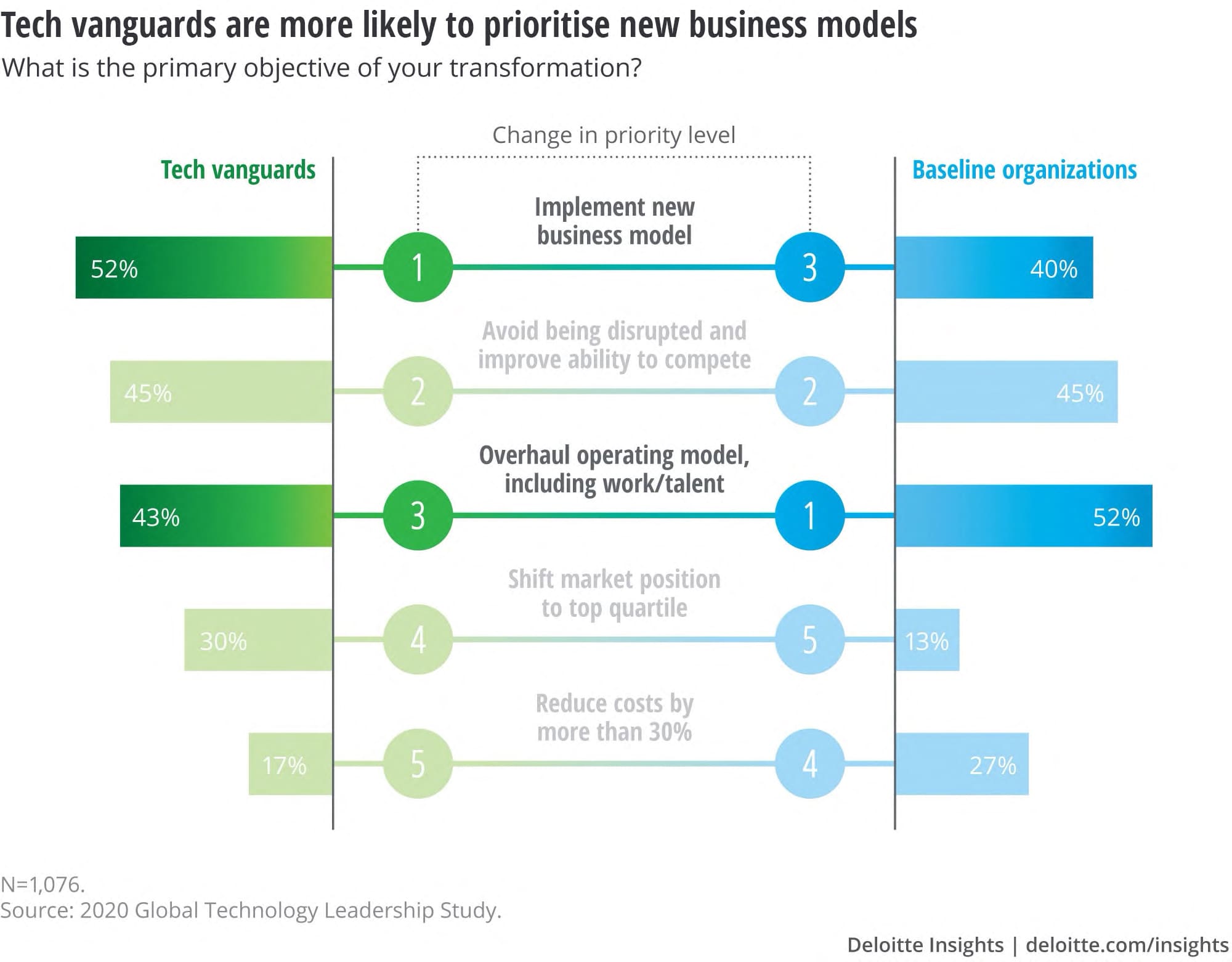 2. Growth is being driven by prioritising innovation and customers

There are three dimensions to how tech vanguards are different – the first one is that they have a growth mindset with a focus on customers and innovation. They are focussed on growth as a primary driver for change.

Tech vanguards have an unmistakable customer bias. Nearly three quarters are partnering with customers to create new business value. When other organisations are focussed on lowering costs and reducing budgets, tech vanguards’ orientation toward growth and customers drives them to continue to invest in the future. They look to innovation to capture new revenues and expand to new markets rather than focusing on cost reduction.

Tech Vanguards engage in technology as a strategy investment and their board members share with tech leaders a bold, tech-enabled vision of the future that guides priorities, decisions and investments. They actively champion technology-enabled change. 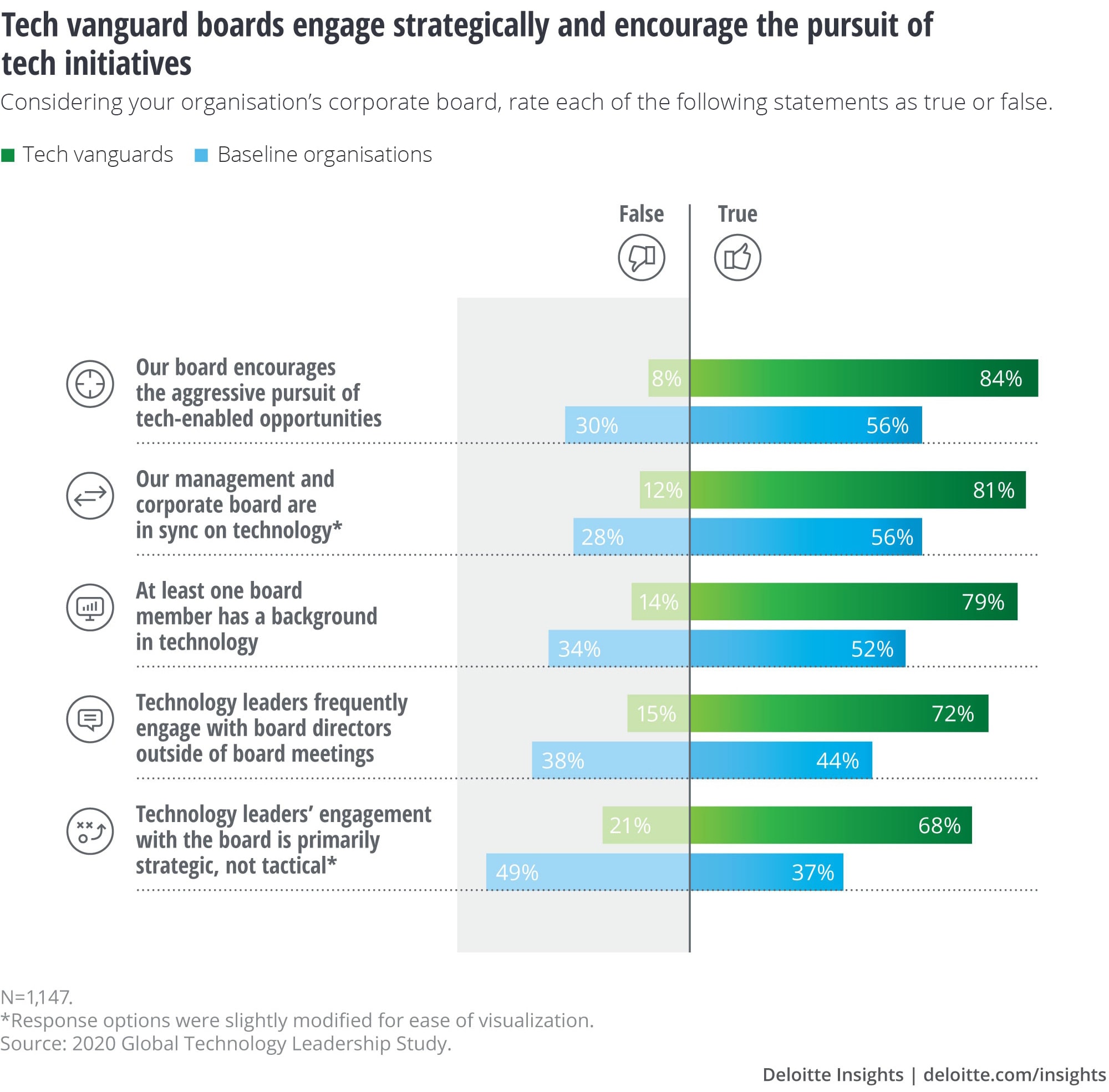 What is a Tech Vanguard and why should you aspire to be one?
Tech vanguards are more advanced than their peers in three areas: vision and strategy, technology function maturity, and are viewed as market leaders or ahead of their competition. In this study, 12% of respondents represented organisations that emerged as tech vanguards.

In the 5 years since Deloitte began surveying CIOs, the CIO focus has evolved from maintaining operation discipline to partnering with the business to drive strategy. Business and technology leaders agree that dynamic, change-oriented technology leaders are needed to help organisations envision the technology-driven future, lead complex transformations, and be the chief architect of innovation and change. When asked to describe the defining characteristics of successful technology leaders over the next three years, 69% of respondents use words such as “change,” “vision,” and “innovative.” And, 50% of CEOs said their CIO or tech leader will be the key driver of business strategy.

COVID-19 has forced leaders to prioritise action, speed, and pace, forcing leaders to focus on action over elegance and to hone their ability to act and do things quickly. 5. Technology leaders can drive technology deeper into the organisation by stepping beyond the role of functional leader

Despite acknowledging that about a third of their staff could become irrelevant to the business within three years, tech leaders are behind their business peers in addressing future talent needs. Business respondents are twice as likely as tech leaders to prioritise the talent agenda, with 31% of business leaders naming the acquisition and development of talent as the top business objective, compared to only 16% of tech leaders who say the same.

Technical expertise and business acumen will always be important, but technology leaders may have to stretch their recruiting efforts beyond the traditional avenues to hire and train talent who have a broader skill set and more diverse experiences and mindsets. Survey participants indicate increasing demand for workers with soft skills—enduringly human social and emotional capabilities needed to collaborate and communicate. Tech leaders noted that the soft skills expected to increase the most in importance during the next three years are creativity, emotional intelligence, and cognitive flexibility, with comparatively less focus on skills such as systems thinking, complex problem-solving, and service orientation. Who is a kinetic leader?
Survey respondents tell us that the ideal technology leader is a change-oriented visionary. This kinetic leader is a tenacious, future-focussed innovator who can guide business-technology strategy, communicate effectively with the C-suite and the board, and drive mission-critical enterprise transformation. For some leaders today, vision and discipline are mutually exclusive—the visionaries struggle to execute while the disciplined operators cannot see beyond today. But not the kinetic leader.

For this change driver, vision and discipline are complementary strengths. The kinetic leader is usually in motion, not waiting for change but instead instigating it and following it through to execution.

What this means now in times of uncertainty:

Organisations in all sectors and geographies are entering a new volatile era, and they will likely need leaders with the vision and tenacity to drive meaningful change amid historic uncertainty. They can’t control the wind, but they can adjust the sails. Faster, game-changing breakthroughs can help organisations meet the challenges of the moment— and those of the future—and technology leaders can help them make the leap from incremental to transformational.

The Global Tech Leadership survey highlights that Kinetic leaders should not wait for business executives to explain their needs; they should get in front of the rapidly shifting landscape and devise proactive solutions to rewire business processes, redefine business models, and help shape their organisations’ ‘Next Normal’.

This year’s study incorporates the viewpoints of 1,311 participants across 69 countries and 22 industry sectors. There was a healthy increase in CXOs and business leaders participating in the study in 2020 — (from 22% of all respondents in 2018 to 40% in 2020). This can be directly correlated with the organisational importance of technology, the growing number of technology leadership roles, and the deeper engagement of CEOs, CFOs, CMOs, and other leaders in areas such as strategy, innovation, and R&D.

Simon is a consulting partner in Ireland and is also currently serving as the Deloitte North South Europe (NSE) Consulting Offerings lead. Deloitte's NSE region brings together over 16,000 of Deloitte... More

The Fourth Revolution is now

The Future Of Operations

How Blockchain can Transform the Irish Beef Supply Chain