Player transfer spending by Premier League clubs in the summer 2014 transfer window reached a new record, according to analysis by the business advisory firm Deloitte. Gross spending totalled £835m, over 30% up on the previous record of £630m set last summer.

“In a summer where the world’s best players were on show at the World Cup we have again seen how Premier League clubs are able to successfully compete on a global stage in terms of attracting talent. We continue to see the increased resources that Premier League clubs enjoy, as a result of improved broadcast deals, translate into investment in players. Last season the average Premier League club received over £25m more in central broadcast distributions than they did in 2012/13, which has helped fuel a new record spend this summer.

“With Premier League clubs in a stronger position to afford increased transfer and player costs than ever before, the key challenge remains pursuing their ambitions responsibly. Regulations are now in place at both a league and continental level encouraging clubs to balance their costs with revenue. We hope that while increased revenues continue to allow the league to attract top players, they will also result in a more profitable picture across the league in the years to come.”

Some of the key findings from the analysis by Deloitte include:

The information on player transfers is based on publicly available information in respect of player registration acquisitions by clubs, including from www.bbc.co.uk and www.premierleague.com, and further analysis carried out by the Sports Business Group at Deloitte.  The information is based on reported transfers as at 01:00 on 2 September 2014. Further commentary about the transfer market is included in the Deloitte Annual Review of Football Finance.  The figures contained in this release will not necessarily be the same as the cost of acquiring players’ registrations as recognised in the financial statements of each club.  Under accounting requirements, the cost of acquiring a player’s registration includes the transfer fee payable (including any probable contingent amounts), plus other direct costs such as transfer fee levy and fees to agents. 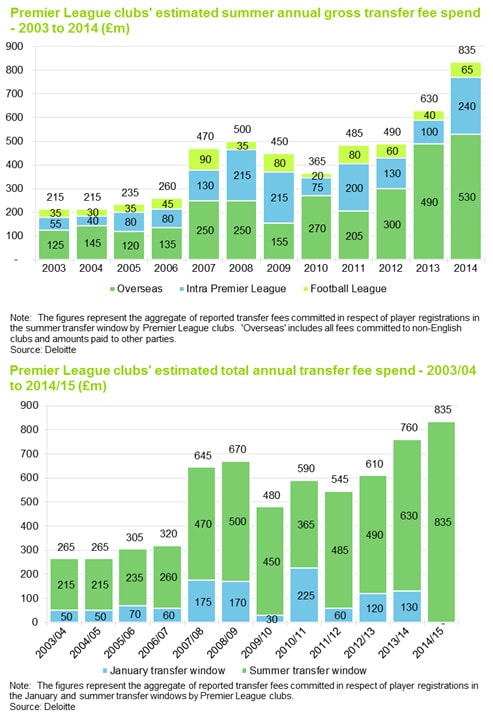