Dan Jones, Partner in the Sports Business Group at Deloitte, commented: “This is the fourth consecutive year the summer transfer spending record by Premier League clubs has been broken. At the start of the 2013/14 season, the summer transfer spending record had stood at £500m, and the fact that this record has more than doubled since then is a clear indicator of the financial growth of the league.

“As has been the case for a number of years now, the increases in broadcast revenue, with the 2016/17 season being the first of the new broadcast deal cycle, is the principal driver of this spending power. The increase in the value of these deals and the comparatively equal revenue distribution of these by the Premier League has again allowed clubs throughout the division to invest significantly in this summer’s market.

“For those clubs traditionally at the upper end of the table who have been investing most significantly, their commercial revenue growth has also been a critical enabler of the increases in spending.

“We also saw a new record level of Premier League summer deadline day spending this window, with £155m spent in the final 24 hours. This, when considered with a new overall spending record, as well as the fact this summer saw a new record for the highest fee paid for a player by any English club are further indicators of the ever increasing purchasing power of the Premier League.”

Jones continued: “Membership of the Premier League has never been as lucrative as it is today and as such we have seen this have knock-on effects in terms of the spending in the Championship. This summer saw a record £215m gross spend by Championship clubs, more than twice the previous record, driven by the investment of recently relegated clubs seeking an immediate return to the Premier League as well as by that of ambitious Championship clubs seeking entry to the world’s richest football league.”

Key findings from the analysis by Deloitte’s Sports Business Group include: 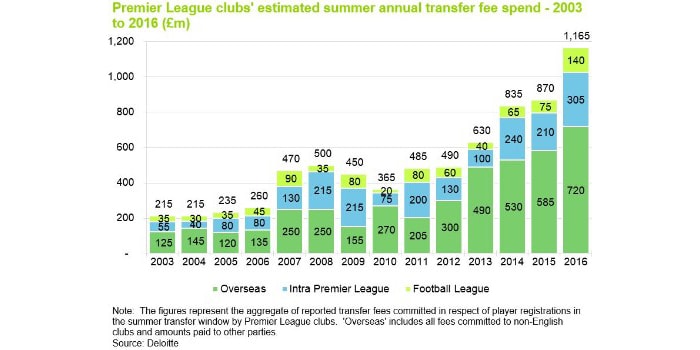 The information on player transfers is based on publicly available information in respect of player registration acquisitions by clubs, including from www.bbc.co.uk and www.premierleague.com, and further analysis carried out by the Sports Business Group at Deloitte. The information is based on reported transfers as at 00:15 on 1 September 2016. Further commentary about the transfer market is included in the Deloitte Annual Review of Football Finance. The figures contained in this release will not necessarily be the same as the cost of acquiring players’ registrations as recognised in the financial statements of each club. Under accounting requirements, the cost of acquiring a player’s registration includes the transfer fee payable (including any probable contingent amounts), plus other direct costs such as transfer fee levy and fees to agents.

Over the last 20 years, Deloitte has developed a unique focus on the business of sport. Our specialist Sports Business Group offers a multi-disciplined expert service with dedicated people and skills capable of adding significant value to the business of sport. Whether it is benchmarking or strategic business reviews, operational turnarounds, revenue enhancement strategies or stadium/venue development plans, business planning, market and demand analysis, acquisitions, due diligence, expert witness, audits or tax planning; we have worked with more clubs, leagues, governing bodies, stadia developers, event organizers, commercial partners, financiers and investors than any other adviser.

Deloitte refers to one or more of Deloitte Touche Tohmatsu Limited, a UK private company limited by guarantee (“DTTL”), its network of member firms, and their related entities. DTTL and each of its member firms are legally separate and independent entities. DTTL (also referred to as “Deloitte Global”) does not provide services to clients. Please see www.deloitte.com/about for a more detailed description of DTTL and its member firms.

Deloitte provides audit, consulting, financial advisory, risk management, tax and related services to public and private clients spanning multiple industries. With a globally connected network of member firms in more than 150 countries and territories, Deloitte brings world-class capabilities and high-quality service to clients, delivering the insights they need to address their most complex business challenges. Deloitte’s more than 220,000 professionals are committed to making an impact that matters.

Deloitte & Touche (M.E.) is a member firm of Deloitte Touche Tohmatsu Limited (DTTL) and is a leading professional services firm established in the Middle East region with uninterrupted presence since 1926.

Deloitte provides audit, tax, consulting, and financial advisory services through 26 offices in 15 countries with more than 3,300 partners, directors and staff. It is a Tier 1 Tax advisor in the GCC region since 2010 (according to the International Tax Review World Tax Rankings). It has also received numerous awards in the last few years which include best employer in the Middle East, best consulting firm, the Middle East Training & Development Excellence Award by the Institute of Chartered Accountants in England and Wales (ICAEW), as well as the best CSR integrated organization.