A step in the right direction  has been saved

A step in the right direction  has been removed

The Saudi Arabian Bankruptcy Law (the “Law”) was introduced in August 2018 to provide entities in financial distress with a legal platform to facilitate the implementation of insolvency proceedings.

The Law grants such businesses access to some form of relief on their debt obligations, as financial distress continues to be driven by the impact of prevailing adverse macro-economic or industry-specific conditions within the Kingdom. This Law is expected to have an even more critical role in the turnaround of Saudi corporates in light of the more recent dual shock of the COVID-19 pandemic and the collapse of oil prices, which have added further constraints on the government budgets of oil-dependent countries.

In fact, 240 cases were registered under the Law in 2019 and 2020 (up to 30 September), which is greater than any other GCC insolvency law. Nevertheless, many corporates and creditors remain hesitant to use the Law as they seek to get more clarity on key challenges and areas that may need to be addressed.

In this article, we seek to provide insight on the various procedures of the Law and outline some of the practical considerations and questions that many creditors and debtors have been investigating. 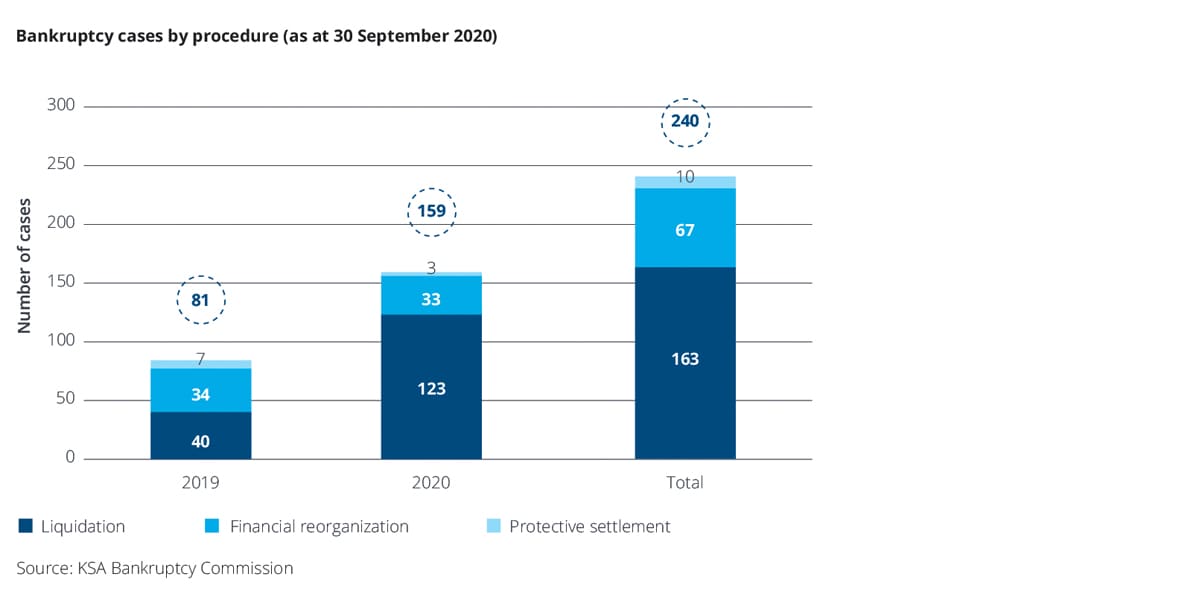 Overview of the Bankruptcy Law procedures

PSP is a procedure that allows the debtors to reach an in-court agreement with their creditors. Under this procedure, the debtors remain in control of their business and will be responsible for the development of the business plan and restructuring proposal. The business plan and restructuring proposal are then reviewed and approved by a bankruptcy trustee before being submitted to the court. Once submitted, a voting process will take place that will require majority approval by creditors for the plan to be approved. An approved plan is binding on all creditors, shareholders and the company.

The debtors will still need to develop a business plan and restructuring proposal but will be given sufficient time (to be determined by the court) to develop such a proposal once the procedure has started. Once a proposal is developed and submitted to court, a voting process similar to the PSP will take place with some nuances around conditions for approval, highlighted in the key practical considerations section below. An approved plan is binding on all creditors, shareholders and the company.

Liquidation is a procedure in which the debtors’ bankruptcy assets are sold, and the proceeds of the sale are to be paid to the debtors’ creditors and can be triggered by the creditors or the debtors. Under this procedure, the debtors cease to manage their activities immediately upon the appointment of a Trustee. 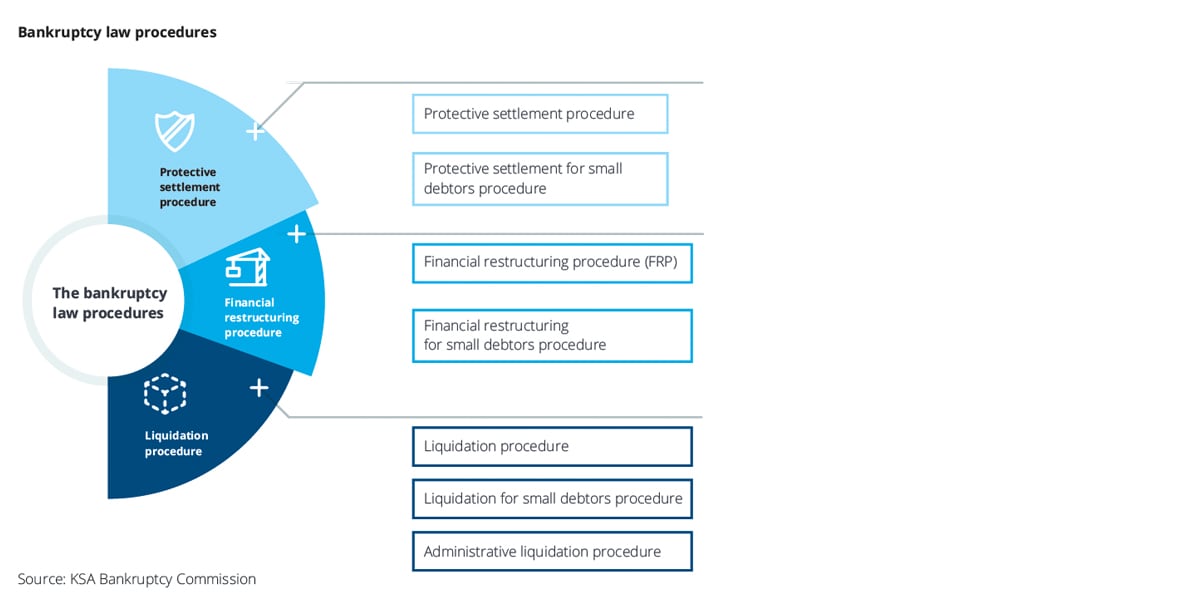 Corporates will need to determine the best route to pursue a restructuring process and whether an in-court or an out-of-court process is more suitable. The most appropriate route would typically differ from one case to another depending on a number of factors, including:

Seeking advice from legal and restructuring advisors is recommended in order to determine which restructuring route to opt for and which procedure within the Law would be more suitable.

When debtors are seeking an in-court restructuring they have the choice between FRP and the PSP. This will largely depend on the stage of negotiations the debtor has reached with its creditors.

For instance, if the debtor had already progressed with creditor negotiations around potential restructuring options and has a largely prepared restructuring proposal, the PSP may be a more suitable procedure.

Majority voting: How does it work and what does it mean?

When drafting the restructuring proposal, debtors should classify creditors into various classes depending on the nature of their debts or their rights. The approval for each category on the proposal is granted if approved
by creditors whose claims represent two thirds of the value of the debt in that
class by value as opposed to number of creditors, including creditors whose
claims represent more than half of the value of non-related parties’ debt.

The proposal is deemed approved if:

The existing creditor classification and majority voting principles provide debtors with an opportunity to cram down unsecured creditors and mitigate the need for a unanimous consensus that would typically be expected in an out-of-court settlement.

The journey toward an effective platform

There continues to be a number of aspects of the Law (and the wider insolvency platform) that will need to be developed further over time in order to build a still more effective system for both debtors and creditors.

This may include further supporting regulations to facilitate the execution of the Law, guidance and training of various stakeholders including Trustees, readiness of the legal system and courts, and rules of engagement with other regulatory agencies, among other considerations. Some of these areas are already being monitored and enhanced by the Bankruptcy Commission.

That said, and while the Law is considered to be relatively new, it seems to offer a practical platform that debtors can use to restructure their business and regulate discussions with creditors. This constitutes a very positive step in the right direction as it is critical to boosting investors’ confidence and, accompanied by other government-led transformation initiatives, seeks to improve the ease of doing business in the Kingdom.

It comes at an opportune time where it might be most needed
as it offers solutions to many distressed businesses that have been severely
impacted by COVID-19 and its long lasting ramifications on many industries.