The pandemic playbook has been saved

The pandemic playbook has been removed

In recent years, CFOs have come under greater scrutiny with the pressure of delivering top and bottom line growth amplified by expanding regulatory requirements, fundamental changes to accounting standards and increased investor scrutiny. Enter 2020, CFOs are currently navigating through unchartered waters with the unexpected pandemic shifting and refocusing finance teams’ efforts and priorities.

Having just completed the 16th Annual Deloitte Middle East CFO survey it is clear that the vast majority of regional CFOs are firmly focused on the short term and keeping their companies financially afloat. Of those surveyed, 41 percent are still responding to the crisis and they are focused on ensuring their company survives and remains viable by being laser sighted on cost cutting and liquidity management. This was closely followed by those who have moved beyond the respond phase and into the recover phase, enabling efforts to be concentrated on adapting the company and maximizing performance during the crisis. A select number of CFOs are pivoting to thrive, repositioning their business models and shifting strategies to prosper in a post COVID-19 world.

The impact of COVID-19 on financial metrics was severe and as such, it is understandable that the attention of CFOs continues to center on mitigating against the ongoing impact of the pandemic.

The financial metrics most adversely impacted were revenue and receivable collection periods, both of which depressed short-term operational cash flows; over 70 percent of CFOs stated the impact of COVID-19 was either adverse or severely adverse for these metrics. This was closely followed by operating margins and supply chains, with 64 percent of CFOs indicating the latter three had been adversely or severely adversely impacted.

In response, CFOs had several levers to pull from their tactical playbook and the implementation of company-wide cost cutting programs was the go-to defensive measure, with 30 percent of CFOs ranking this as the highest priority item. 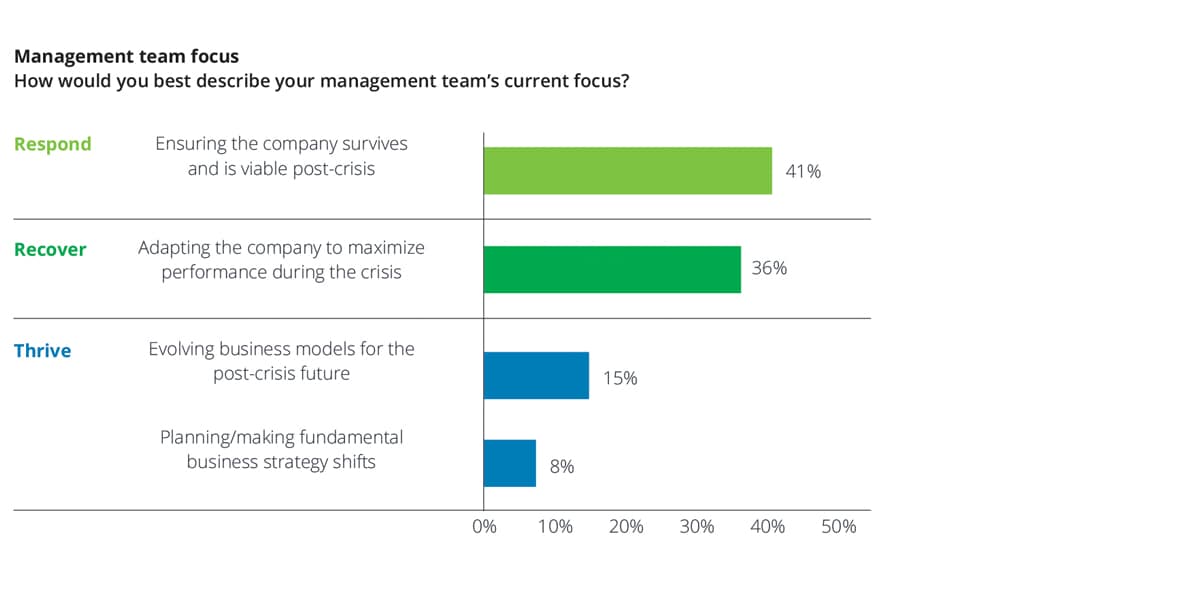 This was also ranked as the most effective measure as leaders were able to exert a higher degree of control over the process, from identification to implementation of cost-cutting programs. As put by one CFO in the UAE: “We went pretty hard at our suppliers for discounts and extended payment terms and we probably saved a couple of million dirhams.”

Other measures popular with CFOs were revenue growth initiatives and working capital optimization, both of which were ranked as being relatively effective. While potentially more impactful, they are more exposed to external factors, such as customer demand and supplier/customer cooperation, limiting the degree of control CFOs are able to exert on their overall effectiveness.

The permanency of these changes will likely extend across the value chain as once the cash benefit arising from working capital optimization is realized, it will prove increasingly difficult to revert back to historical terms at least in the near future.

Heeding Winston Churchill’s words to “never let a good crisis go to waste”, finance leaders are taking the opportunity to streamline their businesses with CFOs indicating that changes to cost bases, operating models and organization structures will be retained in the long term, driving future operational efficiencies and margin improvement. 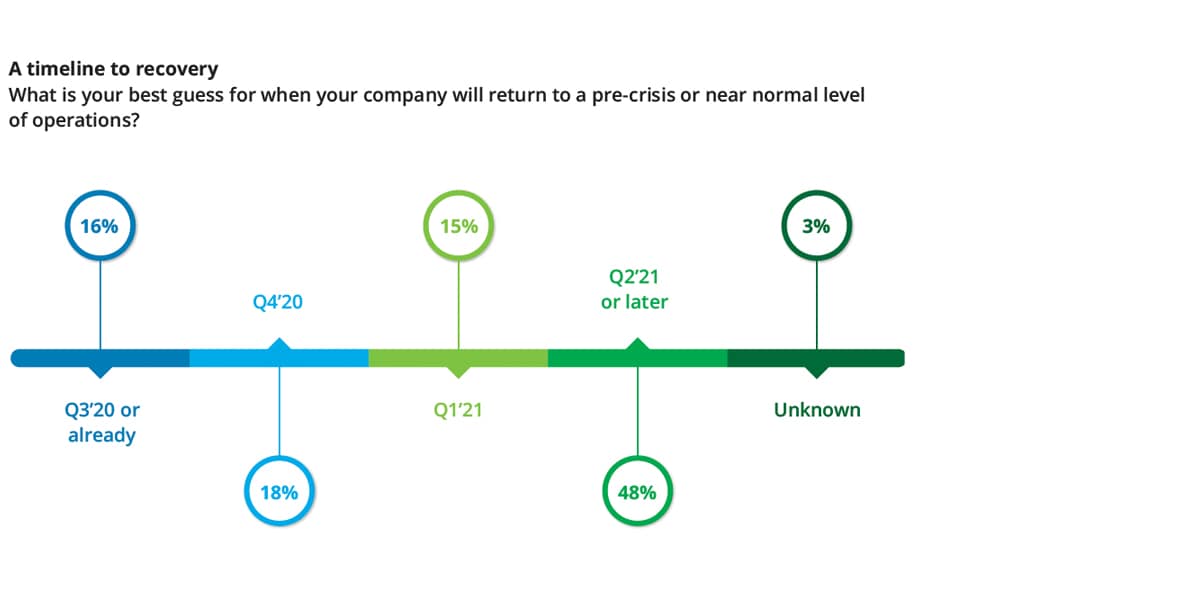 A degree of pessimism around recovery time horizons continues to exist. CFOs remain uncertain around the recovery timeline with 48 percent estimating their company will return to pre-crisis or near normal level of operations in Q2’21 or later. Any recovery timeline was heavily predicated on two critical factors, (i) the impact of a COVID-19 second-wave outbreak and resulting government responses and (ii) the potential timeframe for the development and subsequent deployment of any mass vaccination program.

Sentiment varied significantly across industries with manufacturing and technology, media and telecom (TMT) relatively optimistic, while unsurprisingly travel, hospitality and leisure (THL) remained pessimistic.With recovery not expected until at least 2021 and no near-term respite on liquidity pressures, CFOs are prioritizing increased cash flow and cost management while pricing, ranked second in 2019, is no longer as high a priority. One CFO says: “We have taken the opportunity to become leaner and do things differently and our digital transformation, which we were already working on, will accelerate.” 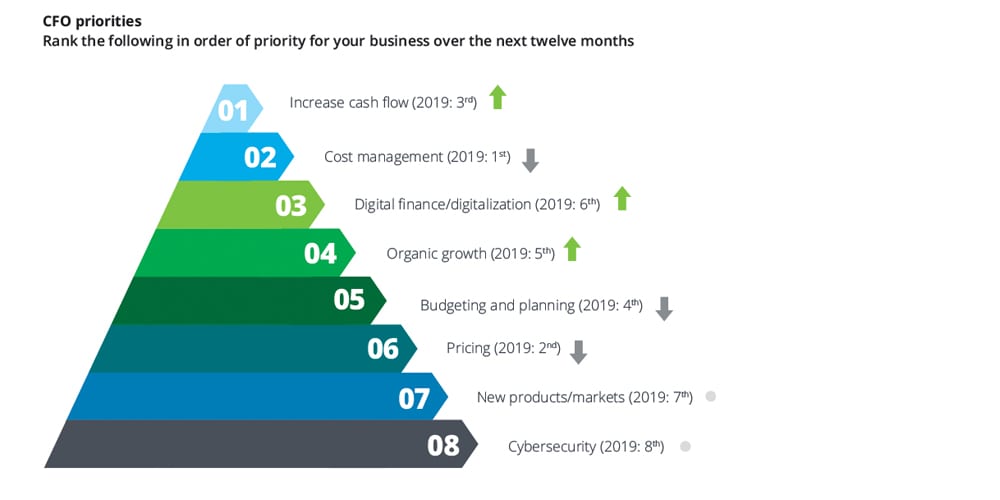 This is supplemented by an increased urgency to digitalize as a result of remote working arrangements, with digital finance/digitalization ranking third this year compared to sixth in 2019.

CFOs mostly agree or are neutral in their assessment of the continuation of remote working, with 43 percent planning to invest and expand remote working capabilities in the next 12 months. Despite this and an increased need to access and utilize data securely from third party locations, cybersecurity remained the lowest ranking priority for CFOs in 2020. We expect that this will change in the near term given the increase in cyber risks.

Although considered a poor time to take balance sheet risk, CFOs remain open to inorganic growth via M&A activity, with 34 percent actively seeking opportunities and an additional 42 percent willing to execute on M&A, should the right opportunity arise.

There is little preference as to whether this M&A activity is vertical or horizontal, with the fortification of supply chains and consolidation of market share (arising from attractively priced, rather than deeply distressed assets) being the preference.

Unsurprisingly, economic uncertainty was the highest ranking risk, with 80 percent of CFOs identifying this as significant over the course of the next year. This was followed by COVID-19, which 70 percent of CFOs highlighted as continuing to be a critical risk over the next 12 months, aligning with sentiment around recovery timelines. While the threat of COVID-19 is intrinsically linked to economic uncertainty, we highlighted this as a separate option in the survey in 2020, due to the pervasive nature of the global pandemic.

Oil prices remain a notable risk, given the extent of regional exposure to international demand. This risk has increased as a concern for CFOs in 2020, with 46 percent identifying this as a key risk factor, compared to 37 percent in 2019. The decline in demand for oil products, particularly from the aviation sector, is seen as a major driver.

Time will tell whether the operational, tactical and strategic changes made in this time of crisis are retained, the extent to which efficiencies are realized or perceived risks crystalize; however, there is a degree of certainty that CFOs will join most of humankind in welcoming an end to 2020 as we seek to respond, recover and thrive once again.