Virtual reality (VR) is multi-sensory immersive environment, consisting of hardware and software components, which provides a virtual world experience via a head-mounted display. Operationally, VR hardware consists of sensors in the headset that track the user’s movements and change the user’s view accordingly. This gives users the impression of being physically present in a virtual environment.

VR technology is not new. It has been around for several years and has been mostly developed for its core market, namely dedicated computer gamers who seek a rich, interactive gaming environment.

Development of VR technology has spurred a global race to identify and capture the next major market opportunities. Hardware device manufacturers and software developers are collaborating with architects, designers, healthcare practitioners and other sector experts to develop the next generation of interactive products and services. Even in the gaming industry, the main consumer of VR products, closer collaboration with automobile manufacturers and sporting associations, for instance, is producing more interactive and realistic games enhanced through VR technology.

MENA market development: 2016 will continue to be the year of VR gaming

Deloitte predicts that most Middle East North Africa (MENA) revenues from VR devices and services in 2016 will continue to be driven by video games. According to regional sources, the estimated MENA computer gaming market is currently valued at almost US$1.5bn and is expected to continue growing, with the majority of growth coming from the Gulf Cooperation Council (GCC) region. The Middle East is one of the fastest growing and most promising regions for VR, both for gaming and enterprise applications. Countries such as the United Arab Emirates (UAE), Bahrain and Saudi Arabia have seen consumers adopt head-mounted displays (HMD), an integral component of many VR applications, for both gaming and corporate use. With a high disposable income, a young and rapidly growing population and increased demand for leisure activities, the gaming industry has experienced rapid growth, with VR following suit.

Early adopters of concept gaming products will continue to be the mainstay of the industry but increasingly more products will begin to be purchased by casual gamers. VR-enabled games are delivered for personal computers (PC), console and mobile platforms, with currently the largest segment being PC solutions. VR applications delivered through smartphone and tablet devices will also continue to grow, however most are still at an early stage of development and will mostly appeal to casual gamers or technology enthusiasts.

Although currently at a low base, the VR market in the MENA region is expected to grow at a rapid rate. Deloitte analysis suggests growth is likely to be driven by the following factors: Outside of the gaming industry, VR is making inroads in the GCC corporate sector as has been witnessed by the introduction of new VR solutions such as the following: 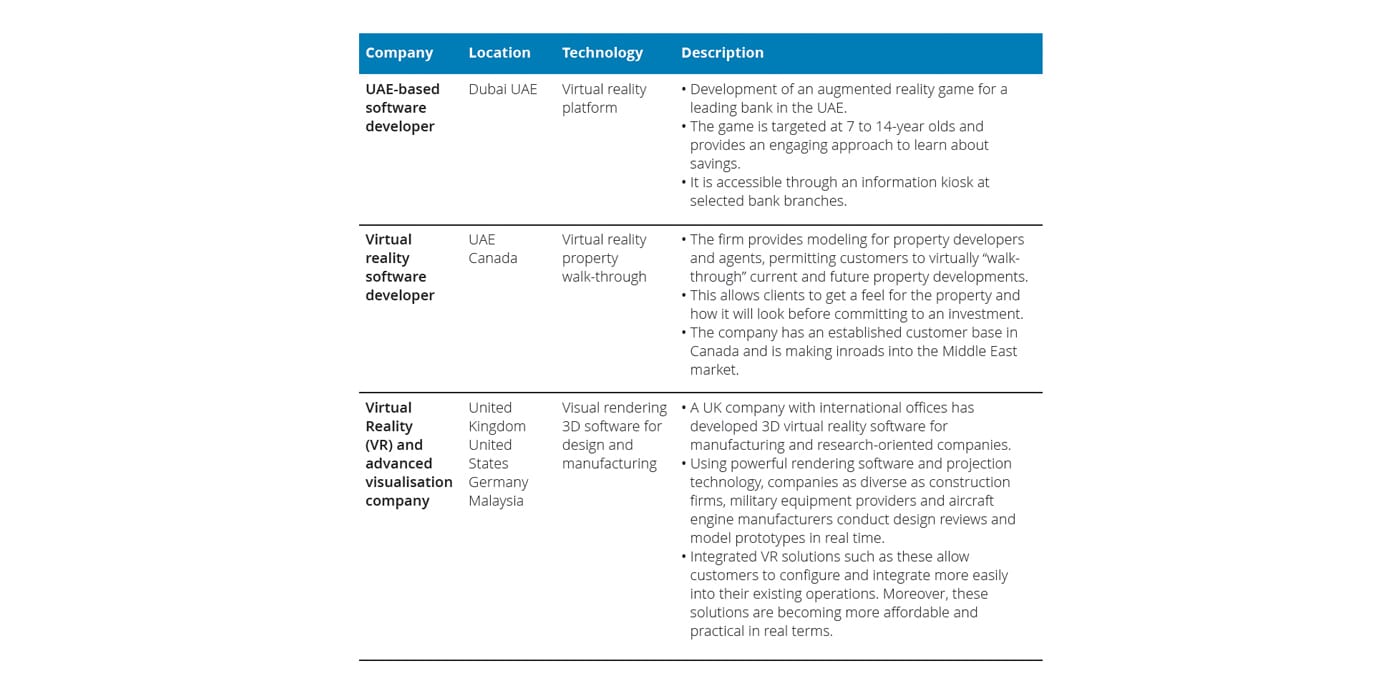 If implemented correctly, VR solutions can produce significant increases in employee engagement and productivity. They can provide a low-cost method for people to collaborate on projects, share ideas and immediately determine the effects and impact of design changes.  For retailers, VR can be used as personal technology to enable a more immersive experience. According to technology research firm Gartner, “business moments” will become the building blocks for new businesses as barriers between the physical and virtual worlds begin to blur.

Corporate VR: on the horizon but not quite there yet

However, before VR technologies become mainstream there are still significant challenges to surmount. For all the development in headset technology, HMDs can still be awkward to use and may not appeal to or be practical for certain types of corporate applications. Research continues in alternative display formats and technologies that could effectively simulate real-world scenarios. VR manufacturers will also need to consider usability and the key factors that drive behavioral change.

Moreover, for mainstream adoption to occur, the market will need to agree on an open standards framework that will be used by software developers to create the next generation of VR applications. The emergence of a predominant development standard and device will likely spur the next generation of growth in the VR market.