Without taking shortcuts, Lundin Norway transformed a small operations team into a lean, safe, full-scale production company with the right organization and infrastructure in place in less than three years.

Three years after it was founded, Lundin Norway struck oil in its first exploration well on the Norwegian continental shelf. The 2007 discovery at the Utsira High area in the North Sea revealed a substantial reservoir, kick-starting Lundin’s Edvard Grieg development.

Five subsequent finds followed on the shelf for Lundin, including the giant Johan Sverdrup discovery. Since its first strike eight years ago, Lundin can take credit for half of the resources found on the shelf.

Its stunning success rate and growing resource base fueled an idea among the company’s leaders, who recognized an opportunity to blossom into a full-scale exploration and production company. Lundin submitted a plan for developing and operating the Edvard Grieg field, and following its approval by authorities in 2012, the company was set to become the operator of a manned offshore installation.

“At that point, Lundin was starting with a small, yet highly experienced, team with a goal of commencing production by late 2015. This was extremely ambitious,” explains Erik , Nordic Oil & Gas Industry leader, Deloitte Norway. “But, they didn’t want to take any shortcuts. They had an opportunity to build an operating model that was process-oriented, and promoted safety from day one.”

Lundin management turned to Deloitte Norway for guidance in building its offshore operations organization. “We had the industry knowledge they needed, along with Deloitte Norway personnel who have years of operational experience on the shelf,” says. “We also had done similar work with other operations, developed a methodology based on leading practices, and offered Lundin new ways of thinking to help ensure a culture with focus on continuous improvement.”

Deloitte Norway professionals worked with Lundin to identify the priority operational and support processes necessary for startup and operation of its Edvard Grieg field. The Deloitte Norway team was immersed in all phases of the process, from helping Lundin identify regulatory requirements and analyze occupational risks to developing workflows and key performance indicators.

To improve work processes and implement barriers to reduce risks at the offshore facility, Deloitte Norway categorized all reported industry incidents and accidents on the Norwegian shelf, analyzed those events, and linked them to the work processes where they occurred. “This is work with risks attached, and due to dramatically fluctuating price levels and costs, operational efficiency and safety are crucial to this industry,” Edal says. “We have gone to great lengths to help Lundin ensure that when production commences, risks will be mitigated and Lundin will achieve its goal of being a best-in-class operation.”

Lundin’s first manned offshore facility is projected to begin producing its first barrels of crude oil in late 2015. The company’s management team, however, already considers the project a tremendous success.

“Assisted by Deloitte Norway, we were able to transform a small operations team into a , safe, full-scale production company with the right organization and infrastructure in place in less than three years,” says Kari Nielsen, head of field operations for Lundin Norway. “Deloitte Norway not only has experienced oil and gas industry advisors, but it also offers high-value services that we see no one else. They brought the toolbox, solutions, and strategic thinking we needed to assist us every step of the way.” 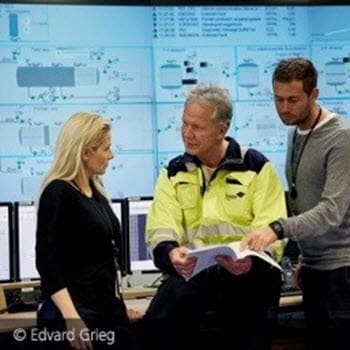 The operating model for the Edvard Grieg field was process-oriented, cost-effective, and promoted safety. Lundin was able to transform from a small operations team into a full-scale production company in less than three years.

As a partner in Deloitte Norway, Svenn Erik has significant strategic and operational experience in the auto, chemical, utility, and oil and gas industries. His core motivation is to improve safety an... More