IM changes on the horizon has been saved

IM changes on the horizon has been removed

IM changes on the horizon

Now and then, the regulatory environment undergoes a major shift or evolution, rocking the market to its core. We think that 2021 will be such a year—at least in terms of new regulations being proposed and published, with most expected to go live post-2021.

But when regulations are produced, they need to be adopted by all stakeholders. The AIFMD review and the evolution of the EU’s anti-money laundering and counter-terrorist financing (AML-CFT) approaches could affect financial entities across the board, including investment managers and their funds.

With level 1 requirements of the Sustainable Finance Disclosure Regulation (SFDR) applying from March 2021, the road towards environmental, social, and governance (ESG) adaptation has begun. The next ESG stops are the level 2 SFDR requirements and the EU Taxonomy Regulation.

Other big changes will be brought by the amendments to the UCITS and AIFMD delegated acts, as well as the Markets in Financial Instruments Directive (MiFID) and the Insurance Distribution Directive (IDD) on the distribution level.

To better visualize the road ahead, a picture is worth more than a thousand words. 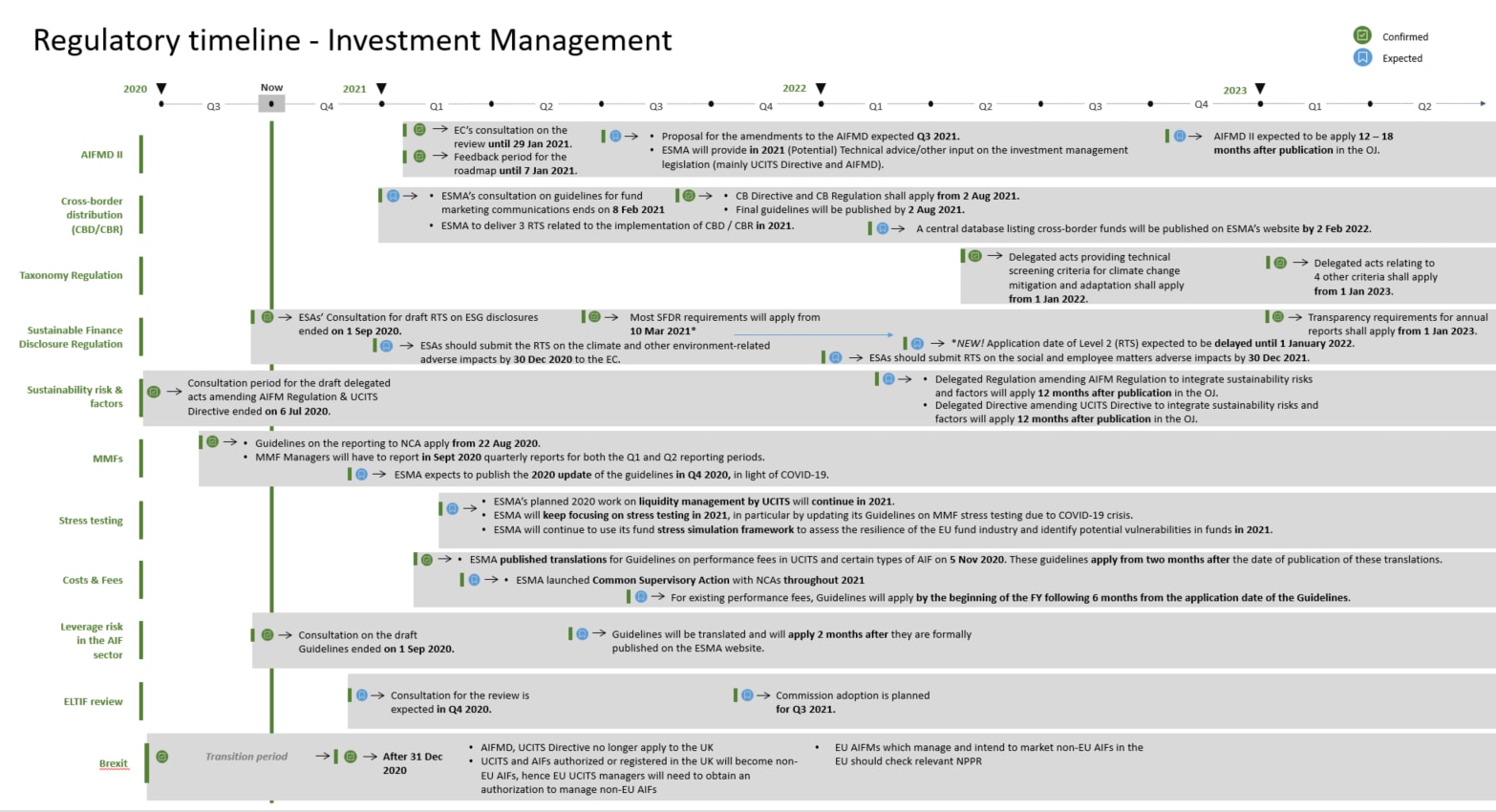 In this article, we will focus on the most important changes ahead, examine their potential impact, and identify which entities could be the most critically affected by these proposed changes. 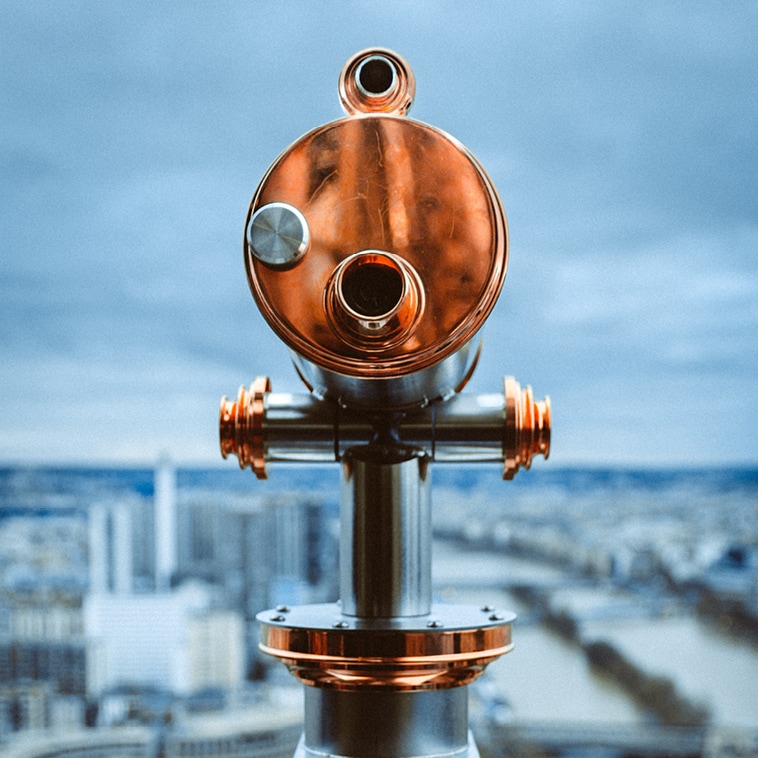 The AIFMD review already kicked off in 2019, with the first consultation on the topic. The major motivation of this review is the directive’s age—nearly 10 years have elapsed since it was first introduced. Brexit has also had an impact, with AIFs and AIFMs in the UK now having third-country status like US products and managers.

Last year, the European Commission launched a stakeholder consultation to explore the market’s opinion of what areas require attention, and even presented the parts it thought were ripe for review.

Before addressing ESMA’s proposals, it is worth revisiting the industry’s overarching opinion on the European Commission’s first proposal: “If it ain’t broke, don’t fix it”. This attitude was shared by many industry participants and local authorities during a European Commission workshop in November 2020.

The overall consensus was that, generally, the AIFMD did not require major changes but instead minor adjustments. These comments are backed up by the sector’s strong growth in new funds and assets under management (AuM), showing the market has adapted to this new type of fund and that the products are gaining momentum across all markets.

First, some supervisors consider certain reporting requirements to be inadequate, notably regarding leverage information and liquidity management. These are certain to receive attention during this review.

Second, the rules governing delegation are also likely to be looked at, as several non-EU AIFs are being sold in the EU and many AIFs lack a fund manager located in the EU. We expect there will be additional demands to better frame delegation arrangements and ensure proportionality between the different entities. There may also be proposed changes to further harmonize the individual country practices on delegation requirements and local substance needs.

This will certainly not make third-country delegation (or any delegation for that matter) impossible; instead, it would require a minimum level of substance and sufficient controls over the delegation chains. In this regard, we can also take inspiration from the ESMA guidelines on outsourcing that were revised at the end of 2020.

The chart lays out the topics raised in the European Commission’s consultation, including the number of questions and points brought up for each.

Regarding the AIFMD review timeline, the European Commission has stated that a first draft should come in Q3-Q4 of this year.

One big, pending question is how the AIFMD review will affect the UCITS product world. For a few years, we have seen certain areas of these two sets of products converge, i.e., depositary rules, ESG, and responsibility for assets. Will this proposal be strictly for AIFs and their managers, or will some changes spill over to the world of UCITS funds?

With ESG, the timeline is a little simpler. The SFDR, which applied in March 2021, did cause some confusion among market players, as only its level 1 requirements were ready. The SFDR’s technical aspects, which are required for it to function coherently across all industry participants, will be completed by delegated acts before the year-end.

The EU Taxonomy and the SFDR level 2 requirements, which apply to the entities themselves, will come into force from next year. So will the obligation to incorporate sustainability risks into the management of funds, if the delegated acts released by the European Commission in April are endorsed.

Speaking of ESG evolution, it is worth mentioning the changes on the horizon regarding MiFID and IDD. Likely to apply from the end of 2022, these distribution regulations will require market participants like banks, insurance companies and independent financial advisors (IFAs) to gather investor preferences for ESG in their profiles and adapt product governance for funds. While these are not direct regulations, these changes could still force distributors to adapt their priorities. 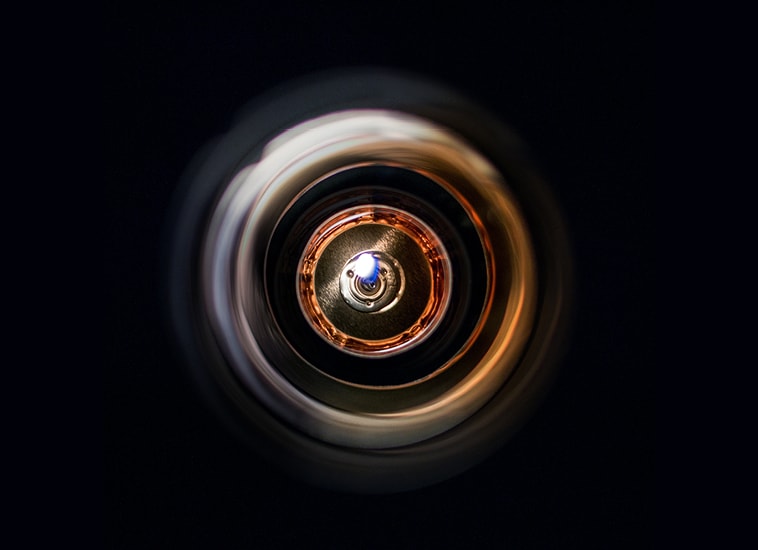 From the beginning of August 2021, the UCITS and AIFM directives will be adapted by a package of reforms that will change the way asset managers distribute their funds across borders:

The CBD will address certain points regarding the marketing activities and delisting from distribution in EU member states under the passport regime.

The CBR will address changes to the passport regime and remove the need to have a physical presence in a distribution (host) member state. Therefore, it aims to have all marketing arrangements established on a remote basis.

One of the main aims of this new cross-border distribution framework is to remove hurdles in the way management companies can market funds across borders. While this new framework achieves this purpose on paper—removing the physical presence requirement will allow for more efficient distribution and a reduction in costs—it appears that the rules are not as clear as they could be. Notably, while the arrangements for cross-border marketing are not regulated per se, some regulators, including the CSSF, require that only authorized entities can render these services to guarantee both investor and member state protection.

There are still some open questions around the automatic notification process across all member states, the use of language, and the possibilities of premarketing or “de-notified funds”.

Another high-stakes question is regarding the future merger of the UCITS KIID with the PRIIPs KID. This topic is heavily debated by all stakeholders. First, talk centered around the merger deadline, which was initially scheduled for 1 January 2022; fortunately, this is now postponed to at least July 2022, if the plans develop as expected.

While this postponement was welcomed by market participants, the replacement of UCITS KIIDs is less popular. PRIIPs KIDs are very costly to create and maintain, and there is much disagreement on the content. The aim of the PRIIPs Regulation to allow investors to compare different products will lead, in practice, to information being constructed in a way that renders it less usable by investors. This will reshape previous UCITS content and, accordingly, make it difficult to compare products across time.

Regarding the PRIIPs KID switch, the time is now to take action, in order to be ready for this change to communications with intermediaries and clients in mid-2022.