Understanding DAC 6 has been saved

Understanding DAC 6 has been removed

What is the purpose of DAC 6 ?

Council Directive (EU) 2018/822 amending Directive 2011/16/EU (“DAC 6”) as regards mandatory automatic exchange of information in the field of taxation in relation to reportable cross-border arrangements, provides for mandatory disclosure of cross-border arrangements by intermediaries or taxpayers to the tax authorities and mandates automatic exchange of this information among the EU Member States. The stated purpose of DAC 6 is to enhance transparency, reduce uncertainty over beneficial ownership and dissuade intermediaries from designing, marketing and implementing harmful tax structures.

As Luxembourg law dated 25 March 2020 follows closely the wording of DAC 6, although its entry into force is scheduled for 1 July 2020, transactions with one or more hallmark(s) indicated in the Directive and put in place after 25 June 2018 will have to be reported to Luxembourg Tax Authorities. It is therefore important to anticipate and establish processes to permit the identification of transactions falling within the scope of this new obligation in order to facilitate their subsequent reporting.

What are DAC 6 hallmarks and the main benefit test?

A hallmark is a characteristic or feature of a cross-border arrangement entailing its mandatory reporting if met. The five hallmark categories have been transposed into the Luxembourg law, which is closely following the Directive.

A main benefit test (MBT) would apply to generic hallmarks as well as several specific hallmarks. As per DAC 6, the MBT verifies if the main benefit, or one of the main benefits, having regard to all relevant facts and circumstances, that a person may reasonably expect to derive from an arrangement is the obtaining of a tax advantage.

The MBT compares the value of the expected tax advantage with any other benefits likely to be obtained from the transaction and has the advantage of requiring an objective assessment of the tax benefits. An additional commentary received through the Luxembourg legislative process indicates that, the main benefit test may be not met when the main tax advantage obtained through the arrangement is consistent with the object or purpose of the applicable legislation and with the intention of the legislator.

The law also clarifies that the MBT must be met with respect to direct taxes. It would not apply where the tax advantage would be solely linked to VAT, customs duties, compulsory social security contributions or other taxes, whether the advantage was obtained in an EU or a non-EU country. 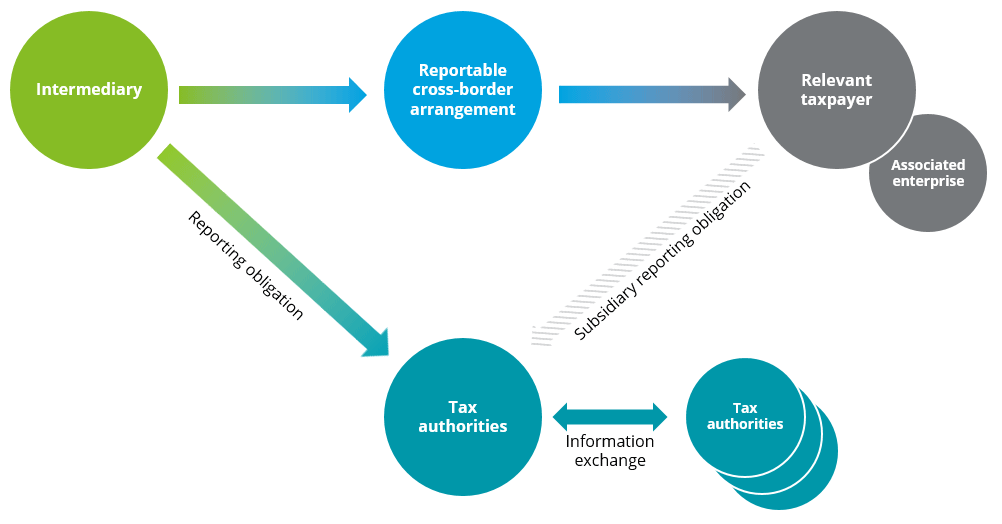 Who would have to report?

The reporting obligation would fall on intermediaries but also, in some specific cases, on relevant taxpayers.

In Luxembourg, the legislation follows closely the wording of the Directive. In that respect, an intermediary is defined as a person who designs, markets, organizes, makes available for implementation, or manages the implementation of a reportable cross border arrangement (the promoter).

An intermediary will also include any person (e.g. individual, legal person, or association of persons recognized as having the capacity to perform legal acts but lacking the status of a legal person…) who knows or could be reasonably expected to know that they have undertaken to provide, directly or indirectly through other persons, aid, assistance, or advice with respect to the activities mentioned above, based on all relevant facts and circumstances, available information and the relevant expertise and understanding required to provide such services (the service provider).

The definition of intermediaries also provides that everyone has the right to provide evidence that they did not know and could not reasonably have been expected to know that they were involved in a reportable cross-border arrangement which is concerned by the reporting. This may, for example, be the case when the person does not have the expertise in the matter or does not have at all or not enough relevant facts or information concerning a cross-border arrangement.

The legislative commentary indicates that DAC 6 does not in itself impose any specific duty on intermediaries and taxpayers that will go beyond their existing professional obligations by requiring them to actively seek information that they will not otherwise hold.

For many intermediaries and some taxpayers, current professional obligations cover Anti-Money Laundering requirements.

Where there would be more than one intermediary involved in the same reportable cross-border arrangement, the obligation to file information would lie with all the intermediaries simultaneously but an intermediary, if it can prove that the transaction has been already reported, is not obliged to report this transaction.

Where no intermediary located in the European Union is involved or if all intermediaries benefit from a legal professional privilege (see above), the reporting obligation falls on the relevant taxpayer.

What must be reported, and when?

The mandatory reporting to the tax authorities is required from 1 July 2020: any reportable cross-border arrangement implemented after that date is to be reported within 30 days of the reporting trigger. As a transitional rule, intermediaries and relevant taxpayers would also be required to disclose information on reportable cross-border arrangements, the first step of which was implemented between 25 June 2018 and 30 June 2020. This information would have to be filed by 31 August 2020.

It is therefore important to anticipate and set up processes to allow the identification of transactions falling within the scope of this new obligation in order to facilitate their subsequent reporting.

However, an extension to DAC 6 reporting deadlines due to COVID-19 has been granted.

In practical terms, the deadlines to report cross-border arrangements for intermediaries (and relevant taxpayers), are the following:

The penalty, in line with those already applicable in the context of exchange of information, would amount to up to EUR 250,000 but the penalty apply per reporting in the case at hand. A penalty would apply for failure to report, late reporting, incomplete or inaccurate reporting, as well as a breach of the requirements imposed on intermediaries concerned by the legal professional privilege.

As indicated in the commentary to the draft law, the intentional nature of an infraction would be taken into account when defining the amount of the penalty.

Even though the law provides some interpretative comments, more clarity on its key concepts, as well as some practical implementation guidelines would be welcomed. In any event, businesses should already start to identify transactions potentially affected by DAC 6, as the first reporting should be filed during July 2020.

In order to properly apply the rules, there are certain steps that intermediaries/ taxpayers (as the case may be) should be planning for now:

Methodology and oversight for prospective projects

AGEFI: DAC6: What do financial institutions need to know about their clients’ tax affairs?