How Senegal remained attractive after the COVID-19 pandemic

It is a known fact that Senegal, of all French-speaking African countries, undoubtedly offers a very welcoming environment for foreign investors thanks to the numerous advantages it provides. Senegal is very politically stable and has competitive production costs, a skilled workforce, advantageous geographic location and no restriction on full ownership of a business by foreign investors. The country’s attractiveness is visible when looking at the Foreign Direct Investments (FDI) hosted by Senegal, which are higher than its direct neighbors (US$629 million in 2018, and the total stock of FDI was US$5.3 billion [22.1% of GDP] at the end of 2018). The majority of these FDI are from France, Morocco, Indonesia and the US.

FDI have been linked for some years with the Emerging Senegal Plan (Plan Sénégal Émergent, PSE) that has been in place since 2014. The government adopted the PSE to give new impetus to the national economy by introducing a new development model. The motto of the PSE is simple: greater competitiveness through the structural transformation of the economy, the development of human capital, and the promotion of good governance.

The government seeks to not only support already well-established mining and energy operations but also develop new sectors thanks to a strong capacity to attract investment. In this regard, the PSE Priority Action Plan identified a funding gap of US$5 billion spread across several diverse projects in terms of size and value. Because of this, the government of Senegal is currently seeking investors that are ready to take part in these projects, such as the completion of: 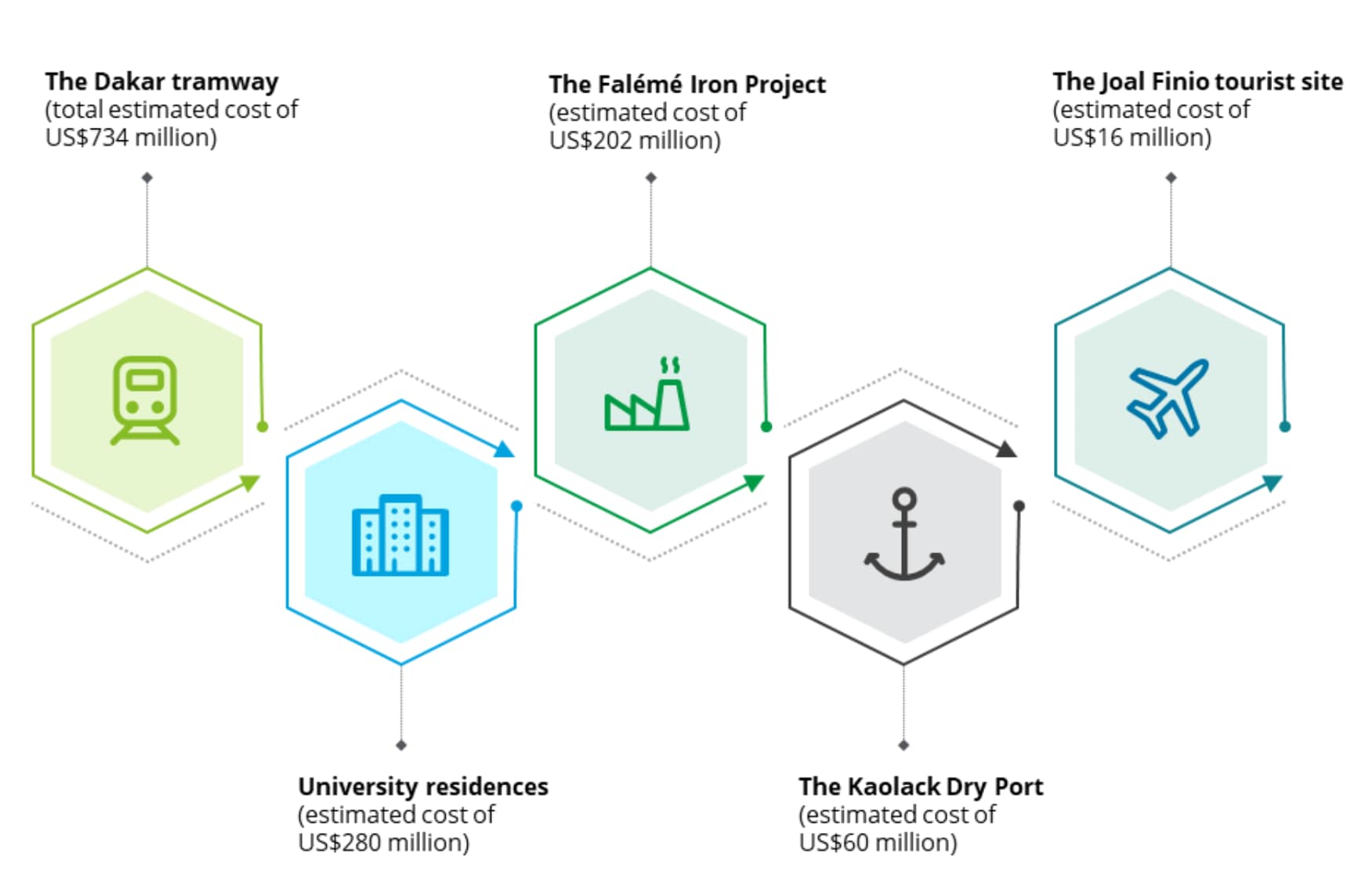 The main objectives are to obtain a GDP growth rate of 8%; reach a GDP per capital of US$1,500 by 2035; and create 600,000 formal jobs. The plan is ambitious but seems to be working; Senegal’s economic growth reached 6.8% in 2018. The IMF anticipated a strong annual growth rate in the coming years, estimated between 7% and 8% by 2021. And in the last few years, Senegal has been ranked among the top three fastest-growing economies in Africa.

However, to sustain long-term high growth, the country will need to stimulate the injection of foreign private capital into its economy. Unfortunately, given the COVID-19 crisis, Senegal, as with any other jurisdiction in the world, will suffer economically and its impressive economic growth should slow down for some time. According to the government’s estimation, Senegal’s GDP will fall from 6.8% to less than 3% (while picking up to 5.5% for 2021, according to the IMF’s forecast, subject to the post-pandemic global economic recovery). Considering these recent events, the government has also adopted an economic and social resilience program to fight the pandemic at a total cost of US$2 billion. In addition, Senegal is demonstrating to the world that it can tackle the COVID-19 crisis, not only thanks to the various measures taken by the government at an early stage, but also due to the cohesion, solidarity, innovation and talent present in Senegal. As an example, Senegal recently announced it can produce a very affordable test for COVID-19 that could benefit many countries.

Despite the current health and economic crisis, Senegal is and should remain an attractive jurisdiction for investors. The current political environment in Senegal is ripe for private equity investments. Indeed, while the majority of private partners engaged in Senegalese public-private partnerships are Asian or French groups, several private equity actors are already taking advantage of the maturing Senegalese environment. This allows both the country and its small- and medium-sized enterprises to improve the efficiency of their development. The Senegalese government is open to the private equity sector and is aware of the key role it could play in sustainable economic growth by investing in long-term products and providing capital to small- and medium-sized companies. Senegal is fortunate in having a government that recognizes the potential of private equity to create a virtuous circle by boosting the local economy and creating jobs.

Over the past few years, Luxembourg has been actively strengthening its bond with Africa and extending its relationship with African countries. To that end, it has supported and participated in various economic missions organized across Africa. This is also the case for Senegal, with which Luxembourg has enjoyed a close relationship for about 20 years.

Luxembourg and Senegal have worked together on the development aid and reinforcement of the bilateral economic relationship. A very wide range of topics has been discussed, notably regarding environmental protection, health care and solutions for sustainable agriculture in Senegal.

This all demonstrates the will of both Senegal and Luxembourg to develop and diversify their relationship.

In order to achieve this goal, Luxembourg and Senegal signed a treaty for the avoidance of double taxation in February 2016, which entered into force on 14 June 2018. It places Luxembourg as a competitive European onshore location to implement funds focused on Africa and, in particular, targeting Senegal. The double-tax treaty provides better conditions than those of other treaties regarding dividend, royalties or interest for instance, which are usually seen as entry points into Africa. The treaty was also included in the last recommendation of the Organization for Economic Cooperation and Development (OECD) and international standards regarding the avoidance of double non-taxation and the exchange of information.

The development of the relationship between Luxembourg and Senegal and, more largely, the African continent, offers new opportunities for asset managers to set up a pan-African fund investment platform in Luxembourg. Based on what we see in the market, this choice has already been made by a good number of private equity actors using a Luxembourg based fund/vehicle as a viable alternative to offshore jurisdictions.

Vincent joined Deloitte in October 2008 as Junior in the Cross Border Tax M&A department, where he is currently Director. With more than 10 years of practical experience, Vincent assists alternative a... More