An Article Titled TV and video: A pivotal time for TV and video already exists in Saved items

Which players will dominate the Dutch TV and video market over the next decade?

The Dutch TV and video market is entering a pivotal phase in its development. The decisions taken by consumers, service providers and regulators over the next two to three years will decide whether the market will be dominated by global platforms, content owners, national players or will remain as diverse and fragmented as it is today.

This is the sixth blog of our blog series on the future of the Dutch TV and video market. You can also read our first, second, third, fourth and fifth blog.

In the previous blog posts in this series, we outlined how the four scenarios described in our study could play out in the TV and video market in the Netherlands between now and 2030. As shown in the chart below, in two of these scenarios (universal supermarket and content end games), global players, such as Netflix and Disney, will dominate the Dutch market. But the other two scenarios (lost in diversity and revenge of the broadcasters) envision that national players will compete successfully with the global giants. These scenarios are based on an analysis of almost 100 social, technological, economic, environmental, and political drivers shaping the TV and video industry. But which of these many forces will prove to be decisive in the Netherlands? 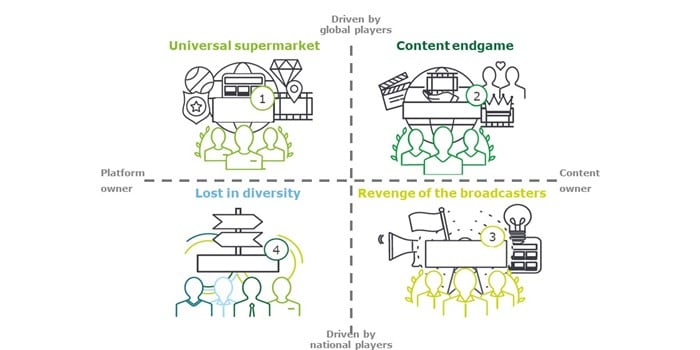 As consumers will ultimately decide which players thrive, one of the most important questions is: how many paid TV and video subscriptions will the average Dutch household have? The answer is between two and four, according to the broad consensus in the industry. If that forecast proves correct, then the Dutch market is likely to be dominated by a handful of global platforms, possibly supplemented by one local platform.

How technology and regulation could influence outcomes

But this consensus view presupposes some inertia. It assumes most households remain loyal to a small number of platforms throughout the year.  In fact, technological and regulatory factors could prompt households to switch between services frequently, binge watching box sets before moving on. If it is really easy to switch services, consumers could become very promiscuous. For example, TV operating systems could make it straightforward for consumers to access a wide range of services, as and when they like. Just as it does in retail, Amazon is likely to make it very convenient for consumers to buy content from a very wide range of sources. Telecoms operators, such as KPN, VodafoneZiggo and T-Mobile, could also play this aggregation and distribution role.

At the same time, EU and/or national regulation could stipulate that service providers make it simple for consumers to switch services and pay per view, rather than having to take out a 12-month contract. Indeed, a competition-friendly technological and regulatory environment could see Dutch households dipping in and out of up to 10 video subscriptions each year.

Although regulators often lag behind market developments, regulation could ultimately decide the shape of the Dutch TV and video market over the next decade.  At both a national and EU level, regulators can use competition law to block consolidation, while international economies of scale can be eroded by both country-by-country copyright restrictions and media regulation requiring the production and distribution of local content. In some cases, regulators stipulate that “due prominence” be given to certain kinds of content, such as local news or cultural programming.

The Dutch TV and video market will also be shaped by technological developments and how consumers react to them.  The capacity, speed and latency of broadband will help determine the extent to which demanding digital content, such as 8K video, 360 degree video streams and virtual reality, are adopted by households. At the same time, rising concerns about energy consumption, greenhouse gas emissions and the social impact of binging on immersive digital entertainment may spark a backlash, which results in people cutting back their time in front of screens. As consumers become aware of how much energy is required to stream and watch 4K and 8K video , they may become more selective in their video viewing. If that happens, the Dutch TV and video market could become even more competitive than it is today.

How big a priority is the Dutch market?

Another important dynamic will be how many of the global platforms, such as Netflix, Amazon, Apple, Disney, YouTube and WarnerMedia, make major investments in the Dutch market. To what extent will they invest in local dramas and documentaries, and bid for local sports rights specifically for the Dutch market?

Unlike many of the national players, the global platforms don’t necessarily have to make a direct profit on their TV and video activities in The Netherlands. Amazon for example, provides video-on-demand services to enhance its Amazon Prime delivery proposition and support its core retail business, while Google/YouTube is collecting consumer data to help it broker targeted advertising across Google’s suite of online services.

Co-operation could be key

To ensure they can compete effectively with the global platforms, we believe national players will need to collaborate to offer consumers a single platform through which they can access all the local content they want. As TV and video distribution is a platform business, it benefits from economies of scale and network effects: consumers tend to subscribe to platforms with the best selection of content, while content providers gravitate towards the platforms with the most subscribers. A single Dutch platform that aggregates content from all the national players is more likely to create this virtuous circle than narrower platforms run by individual companies.

Dutch public broadcaster NPO and commercial broadcasters RTL and Talpa Network are already making their programming available through the joint live TV and video-on-demand platform NLZIET, which aggregates content from 22 linear channels. Yet this joint platform has to compete with other local platforms, such as Videoland, NPO Start and Pathe-Thuis, as well as the global players.

While at the same time competing vigorously (eg broadcasters with their linear channels, telco’s for access fees and the two for distribution fees), national players at the same time will need to figure out how to work together to build a compelling proposition for Dutch households and for advertisers seeking to reach Dutch consumers. In the Netherlands, the government is encouraging such co-operation, but the companies themselves will need to make it happen. Otherwise, there is real risk that they will be swept aside as the universal supermarket or content endgame scenarios come to pass.

This blog is part of a series on "Future of TV and video". You can find the previous blogs here: