TV and Video: What if global content creators become king? has been saved

TV and Video: What if global content creators become king? has been removed

TV and Video: What if global content creators become king?

By 2030, Dutch consumers could be sourcing nearly all content direct from creators

A decade from now, global content providers could well be in the driver’s seat in the Dutch TV and video market. Rather than subscribing to established content aggregation services, such as KPN, Ziggo, Amazon Prime or YouTube, consumers may well be buying lavishly-produced films, dramas, live sport coverage and other highly-immersive content direct from global producers of such content. Ultimately the big budgets of Disney, WarnerMedia, Sony and other global producers could squeeze smaller players, such as Talpa and Endemol Shine, out of the market.

This is the third blog of our blog series on the future of the Dutch TV and video market. You can also read our first and second blog.

This “content endgame” scenario is one of four potential scenarios described in our study, which is based on an analysis of a comprehensive set of almost 100 social, technological, economic, environmental, and political drivers shaping the TV and video industry.

This scenario assumes that global players increasingly drive the video and TV market in countries, such as the Netherlands, while content owners bypass the platforms to build direct relationships with consumers. 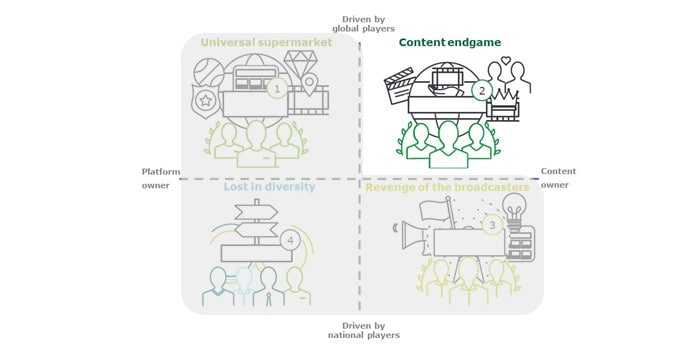 If the content endgame scenario would become reality, the Dutch TV and video market would be dominated by global production companies investing heavily each year in creating blockbuster films, dramas and TV shows in ultra high definition and potentially 360-degree and virtual reality formats. They would seek to sell this content worldwide to amortise their production costs across as many customers as possible. To build a strong relationship with households, these global companies increasingly invest in local content, thus pushing local players out of the aggregation and distribution markets.

At the same time, these companies could use their production expertise to expand into live sports, spending a lot of money on international broadcast rights for Champions League football, Wimbledon, the Tour de France and other events with global appeal. Indeed, ownership of sports rights could be a decisive factor in shifting the winners from the losers in this scenario. Alternatively, the organizers of popular sports events may cut out the middlemen and sell their content direct to consumers, as the NBA is doing in the U.S. and some other markets - basketball lovers in the UK, for example, can pay the equivalent of €28 for an annual subscription directly from the NBA.

The platforms strike back

The main driver behind this scenario is a content arms race: as players across the value chain realize the strategic importance of exclusive access to high-quality content, they will drive up the value of good ideas and the best writers, producers and directors. If the large global content owners, as Disney is doing already, withdraw and withhold their top-end content from digital platform companies and distribute via their own digital platforms and apps, YouTube, Amazon and Netflix will fight back by investing more and more in their own original content, thereby gradually evolving into content-focused companies. Netflix is a good example of this: it originally started out as the aggregator of other companies’ movies and drama series, but now focuses increasingly on its own productions. As there will only be room for a relatively small number of global content houses, some of the big platforms and the big producers may merge during the 2020s. Indeed, the distinction between content providers and platforms may blur completely, as the likes of Netflix and Disney straddle both roles.

At the same time, the digital platforms will increasingly go head-to-head with regional telcos, such as VodafoneZiggo, KPN and T-Mobile, to become the pre-eminent content navigator – a service that helps consumers discover and then purchase TV and video from the content providers. Dutch and EU regulators could play a major role in deciding which players take on the role of content navigators. If regulators allow content navigators to access content owners’ meta data, then operators could assume this role. If not, the content owners have a clear data advantage that would further enforce their position to win in the market.

If the telcos lose this contest they may have to consign themselves to a background role, providing connectivity on a B2B basis to other players serving the retail market. In any case, the content endgame scenario envisions that distribution, search, and recommendations would be heavily overshadowed by the content itself.

In this scenario, customers could have many different subscriptions, and they would switch between content providers for specific content (they would have a subscription with Disney+ for Disney content and Netflix for Netflix content), rather than using a single interface, such as Ziggo or KPN, for all their TV content. This would be facilitated by the operating platform of their device (such as Apple TV, Google Chromecast or the TV operating system), making the TV interface increasingly like that of a tablet or phone where consumers move between apps.

Lacking the scale to compete with global content powerhouses, VodafoneZiggo and KPN are likely to sell their content arms to one of the major worldwide players, such as Amazon or Disney.

To survive, commercial broadcasters, such as Talpa and RTL, would focus solely on the creation of strong local formats, while benefitting from some protection from national and EU regulators. In this scenario, the Dutch regulators and governments, would be likely to ensure that public broadcaster NPO continues to provide local news, entertainment and sports content – such measures may be necessary to ensure that Dutch culture is preserved.

In this scenario, there may be room for local players, such as NPO, Talpa and RTL, to maintain their digital content platforms and apps or combine those into one platform, as they are doing today with NL-Ziet. Indeed, if players in the Netherlands can work together to develop compelling local content, they could achieve synergies that would allow them to provide a competitive subscription service alongside those of the global content powerhouses. By combining their data on consumers’ behaviour, the local players could offer highly-targeted advertising capabilities.

This blog is part of a series on "Future of TV and video". You can find the previous blogs here:

TV and Video: Will super platforms control TV and video?

By 2030, the Dutch TV and video market could be dominated by global platforms