TV and Video: Will super platforms control TV and video? has been saved

TV and Video: Will super platforms control TV and video? has been removed

TV and Video: Will super platforms control TV and video?

By 2030, the Dutch TV and video market could be dominated by global platforms

A decade from now, traditional TV broadcasting could have disappeared. Long-standing broadcasters, such as RTL and Talpa, may be squeezed out of the Dutch TV and video market by a handful of global “super platforms”, such as Netflix, Amazon and YouTube, which assume control of aggregation and distribution, building direct relationships with consumers that sideline existing players.

This is the second blog of our blog series on the future of the Dutch TV and video market. Read the first blog here.

The “universal supermarket” scenario is one of four potential scenarios described in our new study, which is based on an analysis of a comprehensive set of almost 100 social, technological, economic, environmental, and political drivers shaping the TV and video industry. This scenario assumes that global players increasingly drive the video and TV market in countries, such as the Netherlands, while the platform owners build very strong relationships with consumers. 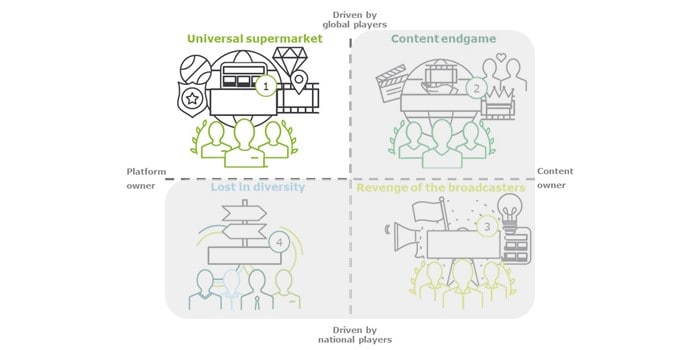 If the universal supermarket scenario would become reality, the Dutch TV and video market would be dominated by a few global platforms offering an extensive range of both global and national content, partially differentiated by some exclusive productions and sports rights. Similar to WeChat in China, these global platforms would use their economies of scale and unprecedented access to behavioural data to continually refine the production and distribution of digital entertainment content, combining video, music and gaming in a single proposition. In such a concentrated market, there would be little need for local media agencies.

One of the fundamental uncertainties in this scenario is how many global players will be fully active in a market the size of the Netherlands. Looking beyond players such as Netflix, Apple and Disney, all aspire to be leading global providers of video content. But Dutch consumers are unlikely to need a large amount of ‘content supermarkets’, distributing largely similar TV, video and entertainment content.

This scenario envisions that the most ambitious of the global platforms (for example Amazon and YouTube) begin to produce Dutch-language content specifically for the Netherlands from around 2022 onwards. At the same time, these global platforms would source additional content from NPO, RTL, Talpa, Blue Circle and other local players on a wholesale basis.

Realizing the danger too late and unable to match the super platforms’ technological expertise, local players fail to collaborate quickly enough to develop a proposition that can compete effectively with the super platforms. The increasing breadth and depth of the universal supermarkets would soon marginalize the role of local broadcasters in the market for aggregating, programming and distributing content.

Later in the decade, Netflix might acquire RTL, subsuming its Videoland and RTL brands. By contrast, Talpa and NPO would likely survive the shakeout, continuing as specialist producers of local news, drama, entertainment and sports content tailored to the Dutch market, distributing their output through the universal supermarkets.

As they compete for customers, the global platforms will continue to seek to strike exclusive content deals, which could fundamentally impact existing distributors. If NPO, for example, chose to distribute its content exclusively through YouTube that might deal a body blow to KPN and VodafoneZiggo’s IPTV and video-on-demand offerings. It could even prompt KPN to stop investing in IPTV and pour even more money into building out 5G connectivity in an effort to excel on providing access services.

What would this scenario mean for telecoms operators? As content supermarkets take over the role of offering a full menu of content and TV services, telecom operators may ultimately abandon the entertainment aggregation and distribution market. Some, such as KPN, could focus on serving the business market, relying on Amazon and YouTube to resell their connectivity on to consumers. International telecoms operators would likely strike global deals with the global platforms. Liberty and Amazon, for example, might forge a joint go-to-market partnership selling packages of Amazon aggregated content and Liberty Global connectivity. Meanwhile in the Dutch market VodafoneZiggo might work with Netflix to ensure high quality distribution and provide 5G tariff plans that don’t generate traffic charges for Netflix content. The Dutch regulator, ACM, may be prepared to allow such zero-rated offers to stimulate mobile video consumption.

Regulation takes a back seat

More broadly, this scenario assumes regulators don’t act quickly enough to contain the growing power of the super platforms. The universal supermarket scenario assumes that U.S. regulators are relaxed about the continued growth in the power of the major global Internet platforms, such as Google, Amazon and Facebook. However when the EU regulator would be relaxed towards global super platforms, individual Member States would desire to maintain close control over their TV and video markets as guardians of cultural and local diversity, protecting players such as NPO and other public content creators deemed to be working in the national interest. They could force the global content supermarkets to offer national and regional content to the consumers.

As the global players benefit from growing economies of scale, they will be able to ultimately lower prices for consumers, reducing the pressure on regulators to intervene. But if the role of operators would get threatened, regulators would take measures to ensure that critical infrastructure for the country remains fully intact to meet the requirements of the emergency services and the military.

Although plausible, this scenario is just one of four possible scenarios that could play out in the Dutch TV and video market over the next decade. In the next three blog posts, we will consider the three further scenarios outlined in our report, looking in particular at the likely impact on both global and local players in the Netherlands.

This blog is part of a series on "Future of TV and video". You can find the other blogs here:

TV and Video: Time for the endgame?