Hydrogen has been talked about for decades, but now things appear to be accelerating. Investments and government support are growing and the technology is ready to further scale-up. This then begs the question of whether hydrogen will become the surprise of this decade, as solar and wind electricity were over the previous ten years. Here we will explore the role of hydrogen in the Future of Energy, discuss the risks of the market, explore the strategies at play and share an outlook for its future.

By Oscar Kraan, Manager in Monitor Deloitte, the strategy practice of Deloitte Consulting in the Netherlands

The energy industry is a capital intensive and slow moving industry, that is often compared to an oil tanker. That being said, the industry does experience the occasional surprise that throws it off course. For example, few analysts expected that with the COVID-19 pandemic in the 2020s we would experience one of the most severe crises in decades. Another recent example is the relatively quickly diminishing support for the production of Groningen gas in the Netherlands or nuclear energy in Germany.

The commercialization of solar and wind electricity in the 2010s has also been a surprise to many. This development has ensured that sectors that are relatively easy to electrify can also be decarbonized. We imagine in the coming years that we will see a lot more of this. The question for the next decade will be: how can we decarbonize the more hard-to-abate sectors such as industry, aviation and long-haul trucking?

The promise of hydrogen

Hydrogen could play a role in these hard-to-abate sectors. In fact the potential of hydrogen has been talked about for centuries. Jules Verne already envisaged its applications and since then the word “hydrogen economy” has occasionally emerged in energy debates. However, hydrogen, much like nuclear fusion, used to be discussed as something that is always just 50 years away.

But we have reason to believe that the story will be different this time. As the ‘10s were the years of the scale-up of solar and wind with significant cost reductions, hydrogen could follow a similar path given that more and more commercial technologies are successfully being showcased, setting-up the ‘20s for a similar scale-up of hydrogen applications, accompanied by potential cost reductions. Notably, R&D spending in electrolysers is paying off as costs are already starting to come down thanks to the learning curve.

The public and private push

With both the government backing and private sector support we could see hydrogen investment reach the EUR 1 trillion landmark by the middle of the century; similar to the achievements of solar and wind. Signals of this public/private push are becoming more visible as the hydrogen economy grows, supported by advancements in technology and the development of infrastructure.

With respect to support from governments, politicians are getting more interested in the possibilities that hydrogen offers. Germany recently announced an ambitious hydrogen strategy with EUR 9 billion ear-marked for hydrogen investments. In the Netherlands hydrogen is mentioned no less than 150 times in the Dutch climate agreement and although the SDE++ subsidy scheme will have little influence in the short term as the costs for green hydrogen remain too high, it is a sign that developments regarding hydrogen are being closely monitored. The state-owned Dutch company Gasunie is also betting big on hydrogen as they are developing a hydrogen “backbone” of existing gas pipelines that will be dedicated to hydrogen.

The renewed interest from Venture Capital and Corporates? 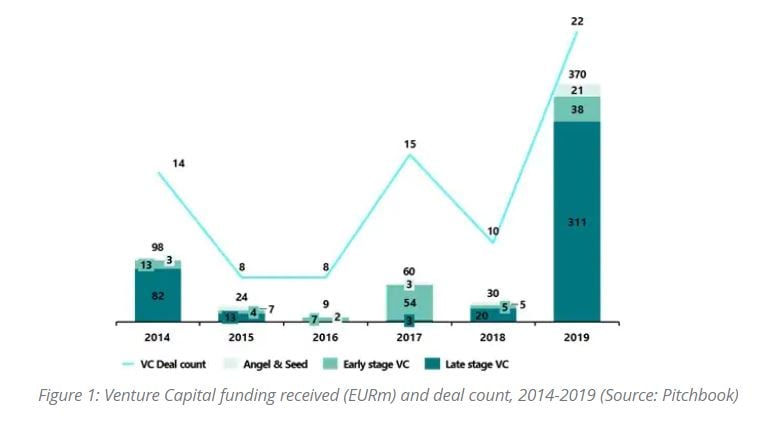 In conjunction with Venture Capital funding, we have seen significant growth in corporate led deals. In 2017, we saw Amazon provide USD 600m capital to Plug Power for further development of their fuel cell technology, which is intended to be implemented in Amazon’s fulfillment warehouses via hydrogen powered forklifts.The recent increase in corporate led deals suggests that the hydrogen ecosystem is poised for further growth, as notably the strategies of corporates are cooperative and value adding, as opposed to competitive and value capturing. Such strategies are essential to mitigating the various risks of entering such an ecosystem.

How to mitigate risk in an emerging technology market

Risks facing corporates from emerging technology markets are two-sided. On the one hand there is the financial risk of investing in the technology, which after passing the research phase must meet commercial requirements in order to scale. On the other hand there is the risk of missing the opportunity, notably automotive OEMs missing the recent electrification trend and needing to play a (very) expensive catch-up. Forming alliances has become the standard for alleviating these risks, as recently we have noticed an uptake in corporates engaging in the hydrogen ecosystem through partnerships and investments, following three broad risk mitigation trends.

Firstly, corporates are combining in-kind services with cash when executing investments. An illustrative recent investment was in September 2019 when Nikola Motor Company raised USD 100m in Series D venture funding from CNH Industrial, in addition to USD 150m in services, including product development, engineering and technical assistance. Limiting the immediate cash investment may be more palatable for corporates, in addition to increasing their influence on the development of the technology and range of applications. Investment strategies in this regard serve to ‘externalise’ R&D development.

Secondly, we are seeing investment diversification through multiple venturing style investments across the hydrogen sector. Examples of this approach are illustrated by the venturing activities of Hyundai and Robert Bosch. Hyundai closed 1 investment in 2020 for Hydrogenious LOHC, a hydrogen storage company and 3 hydrogen investments in 2019; 1) Impact Coatings, who created a fuel cell coating solution 2) H2Pro, who developed an E-TAC water splitting technology and 3) GRZ, a hydrogen storage company. Robert Bosch acquired a 13% stake in the stationary fuel cell company Powercell Sweden in 2019 and a 14% stake in the Solid Oxide Fuelcell (SOFC) company Ceres Power in 2020. This diversification within an ecosystem creates potential for synergies and knowledge sharing as they position themselves across the hydrogen value chain.

Thirdly, partnerships are being formed both across and within industries. This mitigates the first mover risk and serves to grow confidence in participating in the ecosystem for all types of companies. One such example is Faurecia (a global leader in automotive technology), who formed a Joint Venture with Michelin to bring together Faurecia’s hydrogen storage capabilities and Michelin’s fuel cell capabilities, which were developed through its Symbio acquisition of 2019. This partnership created a hydrogen center of excellence and signals both firms’ ambitions to be dominant players in the hydrogen economy by specializing across the value chain.

We anticipate that when the market becomes more established, you will see a next wave of M&A with new leaders emerging, and the ones who missed out acquiring the others. All this renewed attention to hydrogen should ensure that the costs of green hydrogen will experience the same declining curve that solar and wind electricity experienced. This requires scaling up of electrolysers needed to produce hydrogen. This is exactly what we are seeing happening at the moment. Internationally, more than 8 GW electrolyser capacity has now been announced, a tripling in the past 5 months. In the Netherlands, we also have big ambitions with the climate agreement: 3 to 4 GW of electrolyser capacity in 2030. Due to this increase in scale, the Dutch government expects the costs of green hydrogen to decrease by as much as 50 - 60% in the next 10 years.

Where does hydrogen have its largest potential?

Despite this upsurge in interest in hydrogen, we must not lose sight of where hydrogen can make a significant contribution, and where investment in the application will prove to be a bottomless pit. For example, (green) hydrogen in passenger transport will likely remain a niche (although total numbers can still be substantial) because electric cars are now so cheap that it is difficult to catch up with this competitive advantage. Furthermore, in the built environment sufficient alternatives are available. In that sector hydrogen will only find application in those geographies where heat demand is high, isolation is poor and an existing gas network can be used; likely the case in old city centers. The vast majority of houses and offices will see increased electrification and in others district heating or biomass will provide the required space heating and warm water. Hydrogen in the built environment therefore will remain a niche for the longer term. Blending of hydrogen, possible up to 10-20% in the Netherlands without major adjustments, could be an intermediate solution especially when combined with Guarantee of Origin certification.

Hydrogen will have the most impact in sectors that are hard to electrify and where the technology and infrastructure constraints can be overcome. In mobility, long-haul trucking will have the most potential because its energy to weight ratio is superior to that of batteries. The mass-application of hydrogen in personal transport would be helpful to get the costs of fuel cells and refueling infrastructure down, thus supporting applications in the more promising segments such as long-haul trucking or busses. Synthetic hydrocarbon fuels, produced with hydrogen, will enable the decarbonization of aviation and marine transport, but only beyond 2040¹. Hydrogen will also likely play an important role in integrating ever larger shares of renewable electricity, by providing a transport and buffer medium.

However, the largest volumes and gains for the climate on the short term can be achieved in industry, to decarbonize chemical and high temperature processes such as steel making. Many industrial processes already use hydrogen and application of blue hydrogen (hydrogen production from natural gas in combination with Carbon Capture and Sequestration), could be an intermediate step to the use of green hydrogen. It is therefore a good idea to connect the industrial clusters in the Netherlands to further stimulate the use of green hydrogen in industry.

This is exactly what Gasunie plans to do. In this respect, the Netherlands is in a unique position because in most countries gas production is increasing instead of diminishing. The reduction in gas production in the Netherlands means that transport capacity will be available to transport hydrogen. Therefore, it could be that one surprise - stopping Groningen gas production - will lead to the next surprise: large-scale application of green hydrogen in the Netherlands. There are still plenty of hurdles to overcome, but if politics and business take further steps together in the coming years, hydrogen could become the surprise of the 2020s.

Many companies, analysts and market watchers have been surprised by the enormous cost reductions solar, wind and even batteries have seen over the last decade. The conditions are ready for green hydrogen to take the same fast track towards large scale commercialization. To make use of this development, companies need to get in the market now to gain expertise, understand the mechanisms at play, and know what to focus on. They need the partners to hedge the risks and regulatory presence to steer discussions.

¹ Kraan et al. An energy transition that relies on technology alone will become a bet on solar fuels – Joule 2019 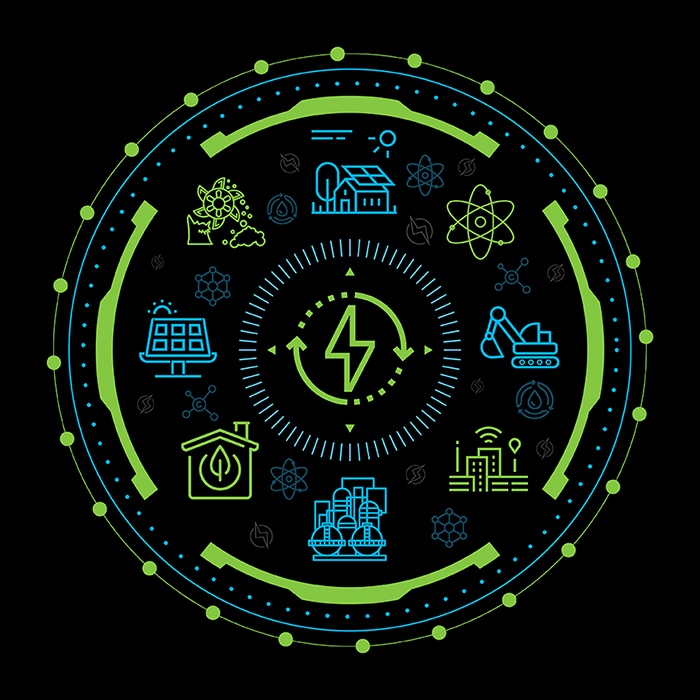 Johannes is the lead partner for Energy & Resources in Deloitte Nordics, and partner in Deloitte’s global offshore oil and gas Centre of Excellence with main focus on production, drilling and wells an... Mer

Varun works as a manager in M&A Strategy, and focuses on advising clients on strategy and market perspectives. He has more than 10 years of experience in the energy sector (oil&gas and renewables), ha... Mer

Jonathan advises on all areas of transactions, growth and navigating volatility & distress. Through the work at the EAT foundation, Jonathan has been deeply involved in the challenges facing the food ... Mer

Planning amidst an uncertain future for the energy industry

The path to the future of energy