Laura Langman knows how to break and keep records – as captain of the New Zealand national netball team, the Silver Ferns, she just became the first in the team’s history to play 150 test matches. Laura also balances her sporting career with a career in accounting, and worked part-time in Deloitte Private until last year. Now, with the Netball World Cup coming up in July, we caught up with her to discuss her time at the firm and how she’s preparing for a very exciting year ahead. 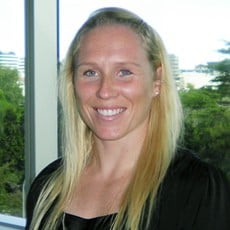 What was your fondest memory at the firm?

I really enjoyed the development and learning platform that Deloitte provided.

Yes - Microsoft Excel is your friend!

What does a regular day look like for you now?

The domestic netball season is about to kick off over in Australia, so most days usually involve training from 5:30 to 8:30 am, then during the day I do a mixture of part-time work, appearances and general team requirements. I finish the day conditioning, or with a court session in the afternoon or evening.

How do you balance your accounting career with your netball career?

The juggling becomes subconscious and you just do it. At times, it is testing on your confidence as my progression in my off-court career wasn’t at the same speed as my peers. On the flipside, having work outside netball was a game changer for me in providing perspective to my sporting life. Balancing netball and work has also allowed me to develop skills that have complemented both areas in terms of being able to switch quickly between the two and be present at each when I’m there.

What has been your proudest moment in your sporting career?

I am really hoping this year I will be a part of something truly special….

Yes, the Netball World Cup! As captain of the Silver Ferns, how are you preparing for it?

At the moment my preparation is largely focused on ensuring I am niggle free, feeling mentally and physically fresh and available for selection.

What would you say is the key to an effective team?

Knowing your role, doing your job and embracing the uniqueness in people is what stands out to me. By doing your job, I don’t mean that you shouldn’t ever have to ask questions, but for me, knowing your role creates forward communication, buy-in by individuals and breeds confidence and energy within a team and wider organisation.

Who is your sporting icon?