Simon Watts is a newly elected MP for Auckland’s North Shore but years before he stepped over the threshold of the Beehive, he was a tax graduate at Deloitte. We caught up with Simon as the New Zealand government was formally reopened after the election, to talk about his memories of the firm, his exciting new job and his volunteering work in the health service. 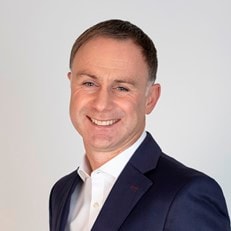 What was your role at Deloitte and what did you take from your time at the firm?

I worked in the Deloitte tax team in Wellington, starting as a graduate. My first desk was outside the office of a young partner by the name of Thomas Pippos!

At Deloitte, I formed an attention to detail and a focus on excellence, as well as the skills for working well in a team. I also made lifelong friends in my graduate year group that I still keep in contact with twenty years later.

What do you remember most about working here?

It was more than just a workplace. My colleagues and I had a culture of work hard, play hard, and we lived that. While there was always that appetite for excellence and we were a competitive group, we stuck together and supported each other.

Congratulations on your election win. As someone new to politics, what motivated you to get into it?

I had a real desire to be able to make a positive contribution to New Zealand and to get things done. I've always worked in finance and while I don't have a political background, I have a sense that New Zealand can and should be better in the future. It sounds ironic now that I'm in politics, but I have a strong dislike of bureaucracy - the status quo is not good enough and I think we should be ambitious and really do the best that we can.

How have your first official few days in the role been?

I've set up my office down in Wellington and am getting used to going back and forth from Auckland. We spent the first day at the house yesterday actually discussing the tax legislation, which will be relevant for Deloitte! But it's very humbling - you sit in the house and you remember why you're there. I’m there because I’ve been elected by my local community and the people of the North Shore and I’ve got a job to do.

You’ve also got a background in working in health at the Waitemata District Health Board, and in working in financial institutions in the UK. How do you think that will inform your work as an MP?

While pretty much all of my career has been in finance in some form, working in the banking industry, health sector and professional services has given me a perspective. I’ve seen that the industries may be different, but some of the challenges are the same.

Certainly a lot of our problems in health relate to the fact that demand for health services is infinite but the budget available to fund health services is finite. You've got to manage that tension and understand the consequences. Working at Waitemata DHB provided me with the real world reality of working without these spaces and that’s something I’ll be bringing to my new role.

I understand you’ve also volunteered extensively in the ambulance service. Can you tell me a little about that?

I've been a volunteer emergency ambulance officer for over 12 years and still undertake frontline shifts every six or eight weeks. That's obviously going to become less now with my availability but I really enjoy the challenge. It gives me the opportunity to make a difference for people, work within my local community and doing something that's good.

With the ambulance service, you've got to get decisions right first time - no different to being in a boardroom or around the table at Deloitte. You've also got to have a good team and work collaboratively. I genuinely really love it.

What would you be doing if you weren’t in politics?

I've got a real interest in start-up technology, particularly in health. We’ve got a lot of talent and smarts here, and a real opportunity to grow our health technology sector in New Zealand. I'd be wanting to be working in that space, with smart, bright Kiwi companies.

Family is obviously a key part. With my wife, Shannon, I've got two young boys, Jack and Callum - Jack is ten and Callum is eight. We spend a lot of time on the beautiful beaches of North Shore.

I'm an outdoors guy too - I love running, watching and playing sport. My new passion is sailing, with the America's Cup coming up, and I’m doing a learn to sail course in my spare moments.