Budget 2022: All about inflation

Calls for Government to do more to support average New Zealanders

Today’s Budget was relatively benign in terms of new big ticket spending items, with the exception of a $1 billion cost of living package in response to the rapidly rising cost of living and calls for the Government to do more to support the average New Zealander. The economic narrative was as expected, one of slightly weaker growth but acute inflationary pressure.

The lead up to today’s Budget release had been largely focussed on how the Government will respond to rapidly rising prices for goods and services in Aotearoa New Zealand. Some support has already been provided for those on welfare (a boost of $20-$42 per adult per week for those on existing benefits) and at the lower end of the income spectrum (by increasing the minimum wage to $21.20).

Inflation is at the highest annual rate since 1990. Mortgage interest rates have more than doubled for those who have rolled off a one or two-year mortgage rate in recent months, increasing mortgage costs for many households, with many more due to roll onto higher interest rates in the coming year.

The rapidly increasing cost of living was recognised today through the Budget’s announcement of a ‘cost of living payment’ for those earning less than $70,000 a year (who aren’t eligible for the Winter Energy payment). The payment is a total of $350, delivered in three monthly instalments. It’s estimated that about 2.1 million New Zealanders will qualify for this payment. In addition, the Government announced it’s extending the half-price public transport subsidy until August and extending the 25 cents excise tax reduction on fuel for another two months. They have also made a 50% reduction in the cost of public transport permanent for those with a Community Services Card. The total support package is worth approximately $1 billion.

Further, the Government is looking at introducing legislation to ban covenants on land as a barrier for supermarkets to access new sites and thereby restrict competition. This is in the hope of increasing choices between supermarkets to encourage greater competition.

The Treasury acknowledged that while inflationary pressures were initially expected to be transitory, they are now much more widespread and embedded, with non-tradables (domestic) inflation hitting a 30-year high earlier this year. The Treasury revised up its inflation forecasts significantly across the next five years, with inflation not expected to be back toward the Reserve Bank of New Zealand’s (RBNZ’s) 2% target level until 2026.

The RBNZ is responding to this by rapidly increasing the Official Cash Rate (OCR) and we expect to see another 50 basis point rate hike at the next Monetary Policy Review on 25 May 2022. The Treasury is forecasting the OCR to peak between 3.25-3.50% by the end of 2023 – in line with the RBNZ’s own forecasts. 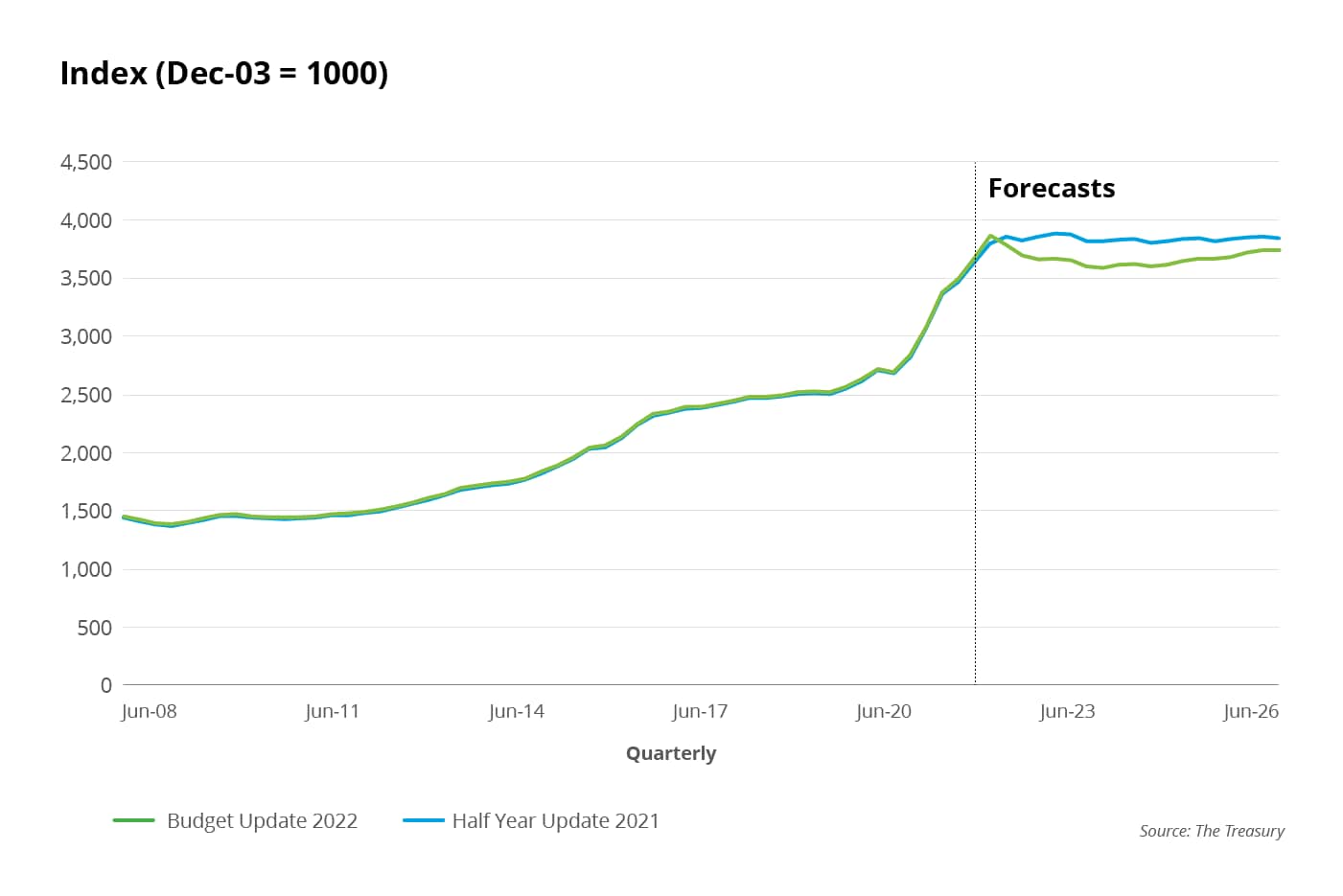 Economic growth more muted and should be watched closely

While economic growth in Aotearoa New Zealand has held up better than expected through the pandemic, a combination of rising interest rates, ongoing capacity issues and lower global growth has meant the Treasury has revised down its growth outlook from 2023 onwards. The Treasury’s forecast for the 90-day bank bill rate has been revised up by around 0.5 percentage points. The global economic outlook has dimmed, driven by the on-going war in Ukraine and the stringent COVID-19 pandemic response in China which is hampering economic output and demand there.


Despite the softer growth outlook, the higher inflation trajectory is strong enough to more than counteract any negative impact on nominal growth forecasts. Nominal gross domestic product (GDP) growth is stronger overall throughout the forecast period than in the 2021 Half Year Economic and Fiscal Update (HYEFU) (see table 3 below), resulting in an additional $40.5 billion in tax revenue. The Government’s books are now expected to be back in the black in fiscal year 2024/25, a year later than indicated in the 2021 HYEFU due to a weaker economic growth forecast.


The overall impact on aggregate demand from the Government’s spending profile is expected to be contractionary from 2023 onwards, and by more than suggested in the 2021 HYEFU. At a high level this would suggest that Government spending may be adding less to aggregate demand and hence inflationary pressure than previously forecast – answering the question of ‘how inflationary will this Budget be?’. The details will matter though as we look ahead as the timing of major investments and infrastructure spending still risks crowding out private sector spending in a highly constrained environment. 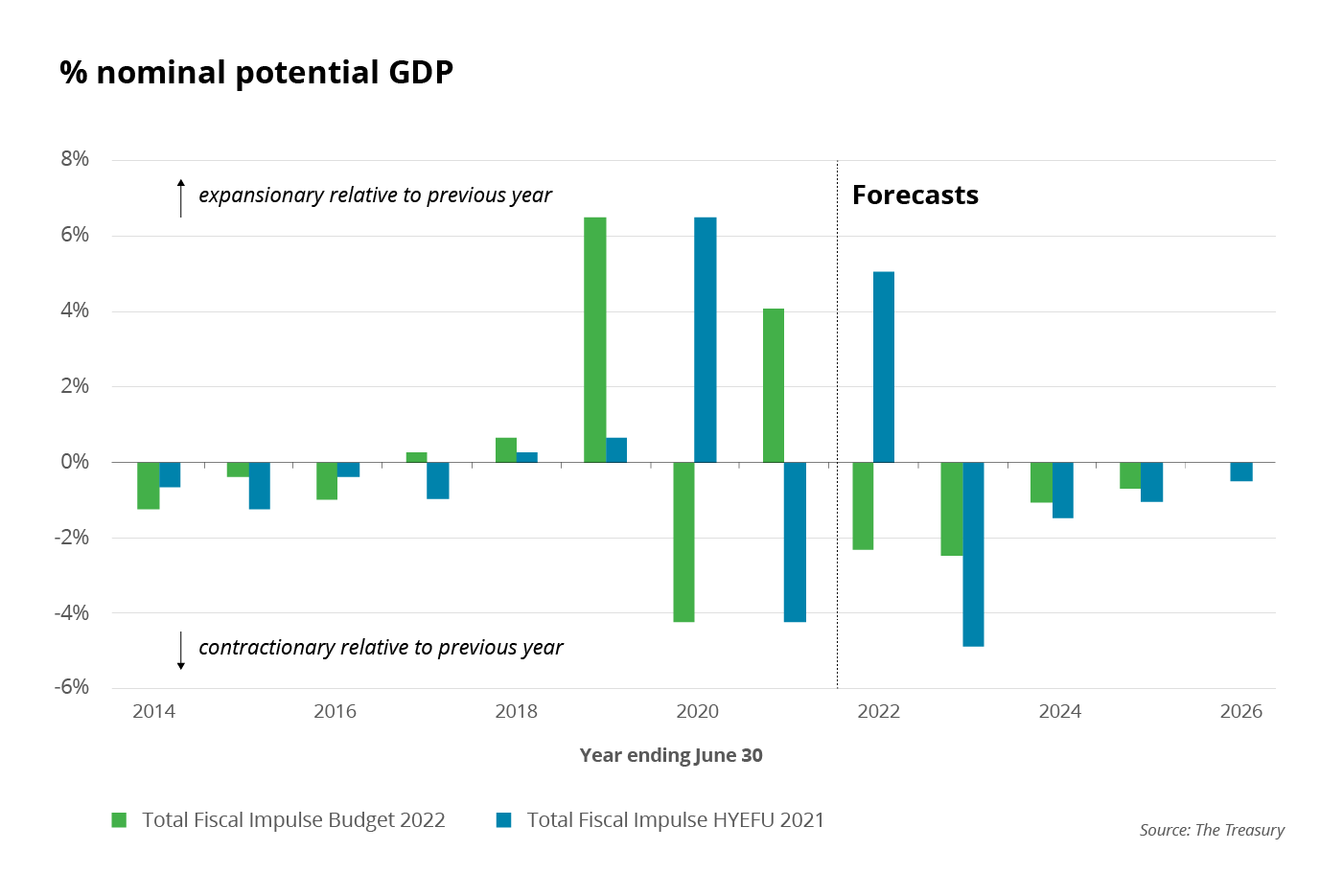 A key part of existing capacity constraints is an incredibly tight labour market. A record-low unemployment rate of 3.2% has prevailed despite the pandemic and hours worked have held up well. This has supported core Crown tax revenue to be $2.7 billion above the Treasury’s HYEFU forecasts for financial year 2022 to date.

Looking ahead, the Government will need to carefully consider immigration policies to ensure that demand is not hampered by a shortage of workers as an increasing number of New Zealanders head overseas. A growing cost of living without comparable wage increases will only encourage the return of the brain drain to countries such as Australia and the UK. Theoretically we should start to see immigration return, although recent data suggests that we are likely to experience a more significant number of people leaving than arriving until at least the end of 2022. The Treasury is forecasting annual net migration to gradually increase to 40,800 by the June 2026 quarter.

A lack of workers could ultimately be another handbreak on growth and add further to inflationary pressure. Wage growth has lagged behind headline consumer price index (CPI) inflation to date, at a rate of 3% over the year to March 2022 (compared with inflation of 6.9% year-on-year), meaning real wages are falling. With the labour market remaining tight, wage pressure is expected to increase, especially if we start to see the ‘brain drain’ picking up over the second half of 2022 and into 2023.

The Government has previously announced an overhaul of the immigration policy and the introduction of the ‘Green List’ which is intended to make it easier to recruit overseas migrants for specific hard-to-fill skilled roles. It also includes a ‘straight to residence’ pathway for those in select occupations. Net migration is going to be a key metric to watch closely as borders fully re-open from July and, in our view, there is a risk that we continue to struggle to meet our labour force requirements for some time, resulting in rising wage growth and on-going capacity limitations.

The Aotearoa New Zealand housing market remains a focus for the average New Zealander whether a renter or owner. A higher number of listings and tighter credit conditions, as well as higher mortgage rates, are acting to dampen price growth with prices now starting to fall outright in several areas. Fixed mortgage rates for the popular two-year term have doubled in the past year and it is estimated that about 50% of outstanding loans are due to roll over in the coming year, with the clear majority of current lending on terms of two years or less.

On the supply side, dwelling consents are running at record levels on an annual basis, with almost 51,000 new consents issued over the year to March 2022 (up 24% compared with the previous year). More than half of these consents were for multi-dwelling units (e.g. townhouses, apartments and retirement village units). However, there is a growing risk that this record number of consents won’t be fulfilled as developers experience supply and pricing issues. This is being compounded by a slowing housing market meaning many developers can’t fully recoup their costs.

The Treasury is now forecasting house prices will decline over 2022 and 2023 in response to higher interest rates. House prices are expected to fall 5% over the year to December 2022 and another 1.5% over 2023 in nominal terms. With much of New Zealanders’ wealth tied up in the property market, this typically ends badly for consumer confidence and spending. We are already looking at consumer confidence at near record lows according to the ANZ Consumer Confidence survey as rising costs have decimated household sentiment. A more severe downturn in house prices (as several market commentators are now picking) is likely to further dampen the outlook for consumer spending with a negative flow-on effect on GDP growth.

The New Zealand Debt Management Office has increased its forecast bond issuance by a total of $26 million. This will cover $20 million of bond buybacks from the RBNZ as it unwinds its LSAP programme and another $6 billion set aside to cover off additional expenditure.

Get in touch with the author

In my role as Deloitte New Zealand’s Chief Economist, I help businesses achieve the best results through a combination of analytics, problem solving, research and clear communication. Every day is an ... More