Budget 2022: Pipeline of infrastructure has never been better

Infrastructure provides a key foundation for the economy and society to function effectively. It is essential for our prosperity and wellbeing.

A sizeable deficit has however built up in several critical areas of our public infrastructure including health, climate change, Three Waters, transport and education. Treasury’s 2022 Investment Statement puts our combined infrastructure gap at $210 billion over the next 30 years under current investment settings. In its recently released 30-year infrastructure strategy, Te Waihanga estimated the cost of building our way out of the current and future infrastructure requirements would require almost doubling current spending – from 5.5% of gross domestic product (GDP) to 9.6% over a 30-year period (equivalent to $31 billion annually to close the gap).

Budget 2021 committed approximately $57 billion for infrastructure between 2021 and 2025. This year’s Budget sees capital investment up to $61.9 billion from 2022 to 2026 reflecting the Government’s willingness to increase borrowing to invest in priority areas. Details of infrastructure spending is limited, with the following initiatives singled out for attention: 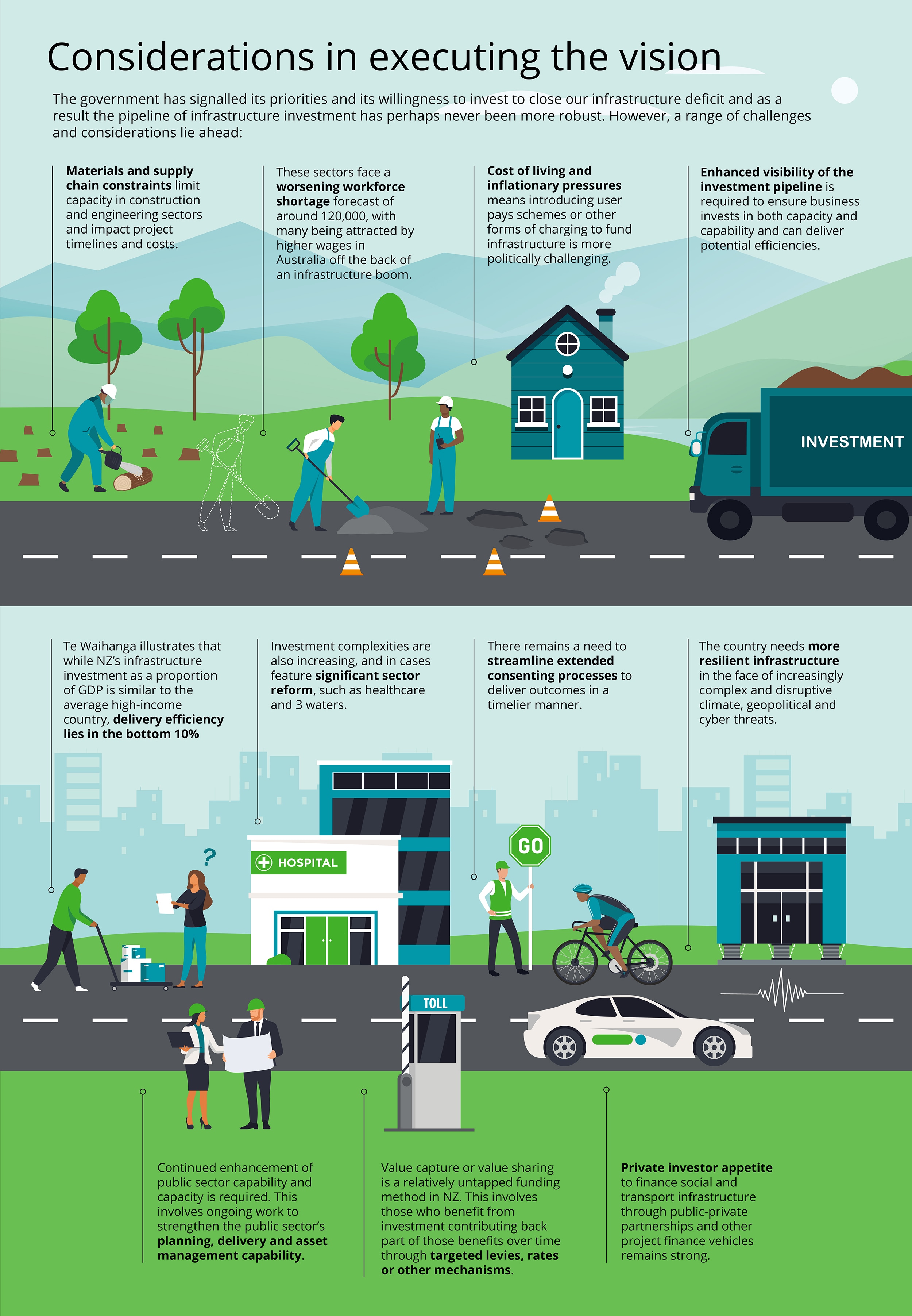 Government already committed in July 2021 to sizeable investments in Three Waters – both the $500 million “no worse off” and the $2 billion “better off” funding announced to ease the transition to the new Three Waters model – in addition to an earlier investment of $761 million in 2020, and $296 million for the establishment and transition costs of the new entities. This $3.5 billion reform price tag is only a down payment on the $90 billion the Infrastructure Commission recently said will be needed to fix water assets, and the $120-$185 billion water infrastructure cost over the next 30 years.

Most of this future investment will have to come from water users in industry, individuals and families, but from a financial perspective this isn’t the end of the story for the Government. The difficult situation where some communities will benefit significantly from new investment and others will feel they are being short-changed, having previously kept up with water infrastructure investment, may need further soothing with cash from central Government. Local councils – who lose both the revenues and costs of water in future – still need to tap into new funding sources for non-water infrastructure growth, development, and resilience, something that Three Waters reform fundamentally doesn’t solve for them.

While the maths might work in terms of the four new water entities being able to borrow sufficiently against revenues to fund this infrastructure, the practicalities of concrete and steel’s considerable climate impacts, environmental legislation and water regulation changes raising the bar, and a shortage of talented water experts in the country, are all significant constraints to their ability to do this in practice.

To balance the ledger and make our future healthy waters affordable, demand mitigation such as metering, pricing and improved water use standards will be needed, as well as really effective strategic asset management by the water services entities. But in the short term, the flow of cash for Three Waters is unlikely to end soon.

Get in touch with the author

I am enthusiastic about helping my public sector clients be more successful in a rapidly changing and dynamic environment. I do this by focusing on strategy and transformation, citizen and government ... More

I lead Deloitte’s Infrastructure and Capital Projects practice with a national focus on the provision of transaction and advisory services to corporate and institutional clients. I bring extensive inf... More