Looking beyond Beijing for a COVID-19 recovery

This article first appeared in the New Zealand Herald on 22 July 2020 - here is the link to the original article (note: paywall content).

As we enter the second half of a very strange year, businesses throughout New Zealand will be working through their COVID-19 recovery plans and deciding where to focus their efforts. It is therefore a timely reminder to be geographically aware when making business decisions.

There is reason to be cautiously optimistic about the broader recovery of our region. Indeed, while our location has often brought cries of distress from businesses looking for opportunities because of the “tyranny of distance” if a more regional view is taken, those cries may be replaced by the quiet conversation of trade.

China remains a bright spot for New Zealand businesses and has a strong record of economic resilience. While the USA is facing it’s second wave of infections, China’s is now one of the few economies that have entered the recovery phase of the COVID-19 crisis.

NZ-China trade has been growing since the early 2000’s and reached nearly NZ$32 billion just before the outbreak of COVID-19.1 Annual exports were worth NZ$16 billion in March 2020, almost twice that of our nearest trading partner - Australia.

China’s economic resilience enjoys historical evidence. It was one of the few nations whose GDP annual growth rate remained in positive figures during the 2008 Global Financial Crisis (GFC), outperforming the likes of the USA and countries across Europe. Today, China’s resilience presents an opportunity for local businesses.

Recently released goods trade data from Stats NZ2 shows China’s resilience as an export market. This experimental data series shows the cumulative trade to key markets between February and June. Though exports to China were down 5% compared to last year, growth has picked up at a quicker pace than our other key trading partners – Australia, the US and the EU. 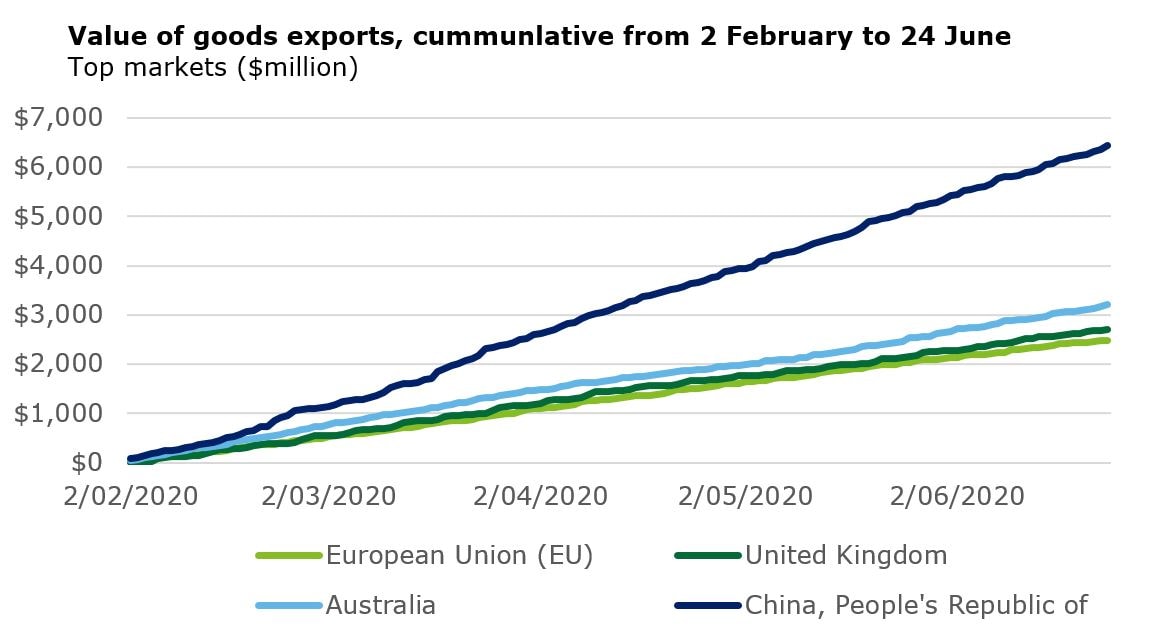 On-the-ground data from China also suggests that the worst economic effects of the pandemic are behind it. Retail sales in May 2020 were 2.8% down on a year prior, a vast improvement from the 20% annual drop seen in January and February. 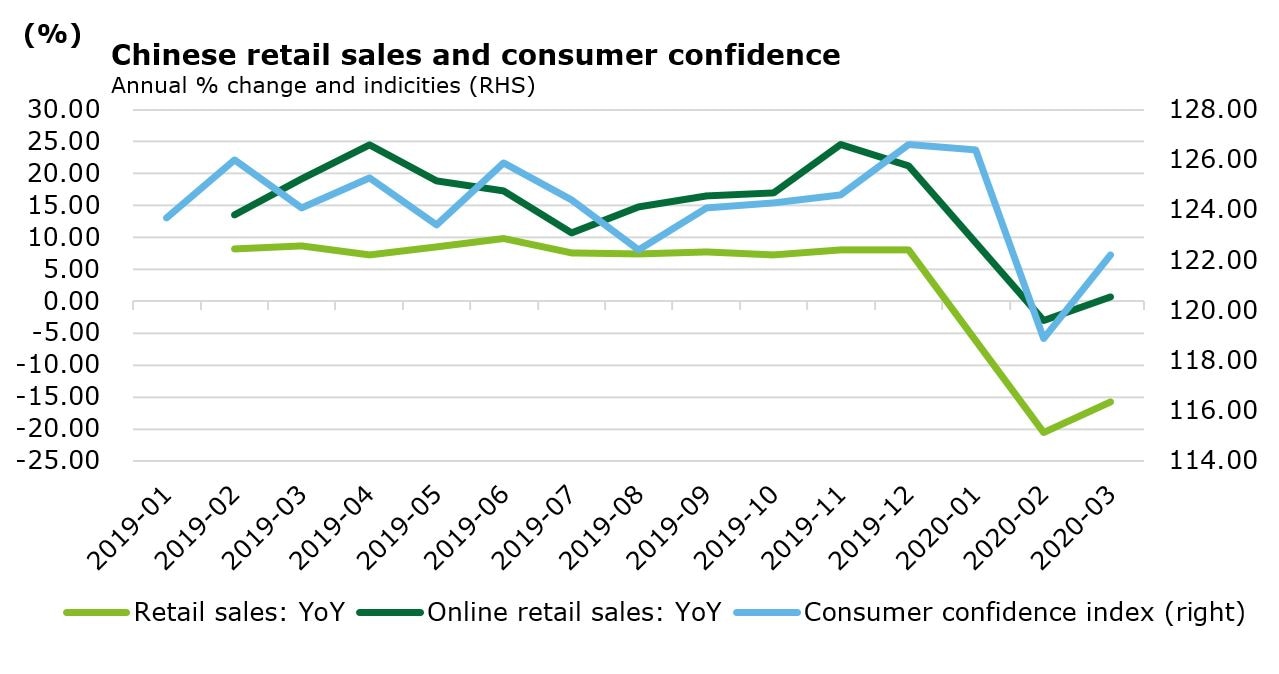 But, where are the specific opportunities to expand this relationship? Like so many questions post-COVID-19, the answer is online. And, according to Deloitte China Research, worth noting in 2020 will be the rise of the market in China’s lower tier cities.

The rise of the lower-tier cities

Prior to COVID-19 online shopping was slowing down in Chinese first and second tier cities like Beijing and Shanghai, where large and wealthy populations have developed brand loyalty, and e-commerce markets are relatively stable and mature.

Replacing this has been measurable growth in lower-tier cities such as Nanning or Weifang. With populations of 7.2 and 9 million respectively it is worth noting that lower tier or smaller Chinese cities offer opportunities at a scale beyond anything offered here in New Zealand.

These cities represent significant opportunity for success thanks to their population size, increasing personal wealth, low levels of brand loyalty, and a healthy appetite for new products.

This shift in growth trends is a signal for New Zealand entrepreneurs: now is the time to expand your marketing into China’s lower-tier cities.

According to Alibaba’s recent annual report, in 2018 its e-commerce platform gained 120 million new monthly active users, 70% of which came from tier 3 cities and below. Data on a recent shopping festival in China showed that the growth in small household appliances and furniture in the lower-tier cities was twice as high as the growth in first and second tier cities.

There are clear reasons why lower-tier cities are overtaking the first and second-tier cities in consumption demand. More than 70% of the Chinese population resides in lower-tier cities and the large base of population means enormous total purchasing power. Increasing income and lower housing prices in these areas lead to high disposable income. Better technology and investments in internet infrastructure mean higher internet penetration in the third and fourth tier cities.

As income and wealth continue to grow in the lower-tier cities, so too will an appetite for high-quality, premium brands and the latest products. When marketing to this new market Kiwi companies would do well to pay attention to the different cultural drivers of these new cities rather than copying and pasting existing strategies to a new market.

With new opportunities come new challenges. In addition to the normal complexities of choosing the right e-commerce platforms; finding the right logistic providers; and dealing with exchange control rules, customers in third and fourth-tier cities are more prone to purchasing counterfeit goods as they are still more inclined to buy goods at a bargain. Therefore, brand protection will be more important than ever for local companies exploring these new markets.

Important to note are the improvements China is making in this area. Zespri recently received approval for key trademark protection status in China and is the first New Zealand company to be granted such status. As part of the US-China trade agreement signed in January 2020, China has pledged to take more action against counterfeiting and make it easier for companies to pursue legal action over trade secret theft. Having said that, businesses should not go to China without considering brand protection and should take steps to ensure their brands are well protected in the market.

Another matter to consider is the use of different marketing tools. Influencers are especially powerful in the lower tier cities. There is no direct equivalent of Google or Facebook advertising, or at least the return on investment through similar advertising is not as good. Instead, influencer marketing is more popular. According to 2017 Digital Commerce Trends Report, 63% of brands interviewed in China indicated that they would enhance their collaboration with influencers as return on investment of influencer marketing is the highest at the moment.

The e-commerce opportunity in China is and could create enormous opportunities for New Zealand exporters – provided they have the willingness to explore the cultural and business differences within China.

2. This data is provisional and should be regarded as early, indicative estimates of intentions to trade, subject to revision.

Leading the Deloitte New Zealand Chinese Services Group has been both challenging and exciting. Our team of Chinese speaking professionals play a key role in assisting both inbound and outbound invest... More

US China trade war food for thought for New Zealand

Deloitte in New Zealand, Australia, China, Japan and Southeast Asia are coming together to create Deloitte Asia Pacific to better benefit its clients and people