The regime and role are largely effective, but there’s room for improvement

The Reserve Bank’s thematic review of the role of the Appointed Actuary has confirmed that they play an important role in New Zealand’s insurance prudential supervision regime. However, the Bank believes that the role should be much broader.

The Reserve Bank (RBNZ) is eager for insurers to rely more on Appointed Actuaries than they do currently, particularly where the actuaries’ technical skills and insurance experience would provide valuable strategic insights and guidance.

The RBNZ and the actuarial profession need to ensure that the role of the Appointed Actuary is clear. Insurers must develop effective policies and procedures to support Appointed Actuaries in carrying out their role. And, there should be a commitment to more direct communication and increased engagement between Appointed Actuaries, Boards of Directors, and the RBNZ.

The COVID-19 crisis and other issues affecting insurers including changing customer expectations and needs, the economy, natural hazards and the environment, all highlight the tremendous challenges typically faced by an insurer’s management and Board. Insurance leaders must increasingly seek expert advice, including from an effective and capable Appointed Actuary, so they can respond confidently and appropriately to such challenges.

The RBNZ recently published its thematic review of the Appointed Actuary (AA) role for licenced insurers in New Zealand. The review took place between March 2019 and March 2020 with the intention of understanding how the AA role works in practice, and identifying areas for improvement, in order to make the role and regime more effective.

RBNZ notes that AAs have an important statutory role, as set out in New Zealand’s Insurance (Prudential Supervision) Act, 2010. The Bank also highlighted that the role was seen as attractive and of high standing, and that AAs were seen by insurers as effective in their roles.

More telling, however, was the finding that the majority of insurers saw the AA role as fulfilling only basic statutory requirements. Typically, only New Zealand’s largest insurers used the Appointed Actuary’s skills and experience in more strategic areas.

Yet perhaps the most important theme to come from the review was the need for clarity and guidance on RBNZ’s expectations for the AA role. RBNZ’s view is that that the role of the AA is much wider, or should be, than is perceived by the majority of insurers. The Bank’s overall conclusion is that the regime and the role are largely effective but that there are areas where improvements could be made. These areas are set out below.

We agree with the Bank’s overall conclusions. However, we believe the real value of the thematic review’s findings will be in clarifying the purpose of the AA role, and enhancing its value for insurance companies’ management and Boards.

Weaker areas identified by the RBNZ in the review included:

Inevitably the extent of good practice followed will vary among Appointed Actuaries and insurers. Nevertheless, we acknowledge that the particular points identified are important in enhancing the overall effectiveness and reputation of New Zealand’s Appointed Actuary regime.

Of potentially greater value, however, are several broad recommendations made by RBNZ that go to the heart – and indeed the purpose – of the Appointed Actuary role.

Among the twenty or so recommendations made by RBNZ, several appear to sit firmly in line with the RBNZ’s general theme of clarifying, enhancing and strengthening the Appointed Actuary role. These are set out in the table below.

We have identified these particular recommendations as important because they will help to clarify and simplify the role of the AA and their interaction with key stakeholders. They will also help ensure that the AA has a strong voice, and is seen to have a strong voice, when it comes to closer engagement with the regulator and other key stakeholders.

Key considerations for management and the Board

As we noted above, we believe the real value of the thematic review will be in clarifying the purpose of the AA role and enhancing its value for insurance companies.

We would encourage every insurer’s management and Board to ask several simple questions about various aspects of the Appointed Actuary’s role.

And what about Appointed Actuaries?

The RBNZ thematic review sets the scene for clarifying the role of the Appointed Actuary, and sets in place clear expectations for adding value and for strengthening their voice. Appointed Actuaries need to play their part with competence and care. Of course, most will already do so.

Deloitte’s research on similar senior financial leadership roles suggests that Appointed Actuaries should embrace a “four faces” framework (see diagram below). They should move steadily from more functional “Steward” and “Operator” roles to position themselves squarely among their senior leadership peers in “Catalyst” (influencing) and “Strategist” (decision formulation and implementation) roles. Such a plain transition may be a key and significant first step in clarifying the broader insights and value that an AA can bring to an insurer.

Clearly defined and strategically positioned, the Appointed Actuary can play a greater role in ensuring insurance companies continue to achieve their purpose, in turn helping to ensure policyholders’ expectations are sustained for the foreseeable future. 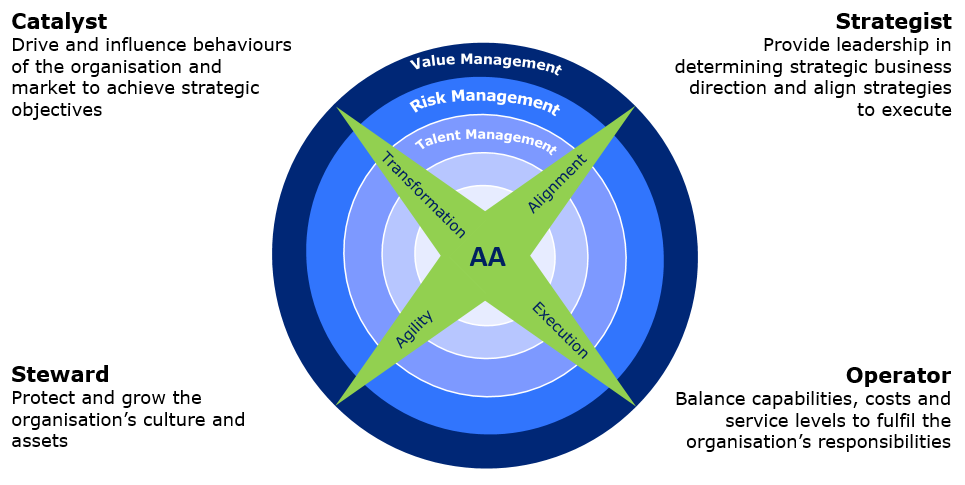 Richard has enjoyed a long and diverse career in the general insurance industry, in the UK and New Zealand. He has been the Appointed Actuary for one of New Zealand’s largest insurance groups, and dev... More

I have extensive practical, strategic and operational experience in the Insurance Industry, where I’ve developed a passion for the end-consumer and how the right needs-based insurance solutions can en... More