The shortfall penalty regime is one of the most powerful tools Inland Revenue has at its disposal to encourage and enforce compliance with tax laws.

Every year Inland Revenue impose thousands of shortfall penalties amounting to millions of dollars to taxpayers who take incorrect tax positions. To put some figures around it, in the eleven years from 1 July 2010 to 30 June 2021 67,380 shortfall penalties were imposed amounting to a total dollar value of $430,083,681 (after the application of voluntary disclosure and previous good behaviour adjustments).

Note: The data referred to/graphed in this article is sourced from Inland Revenue’s reports on the application of shortfall penalties pursuant to section 141L of the TAA, for the years ended 30 June 2011 – 2021.

One might reach the conclusion that the lower number of penalties is correlated to the reduction in Inland Revenue staff and reallocation of resources at Inland Revenue arising from the Business Transformation project. However there could be other explanations, such as an increased focus on taxpayer education and processes to help taxpayers take correct tax positions in the first instance (the “Right from the Start” approach).

The two most common types of penalties imposed throughout the period reviewed have been for evasion or similar act (150%) and gross carelessness (40%). The incidence of these two shortfall penalties types reduced significantly from 2017 on. The number of penalties imposed for promoter, unacceptable tax position and abusive tax position has remained consistently low over the period. What this may show is that taxpayers are generally very compliant, and enforcement time is being directed toward taxpayers who are wilfully evading tax obligations. 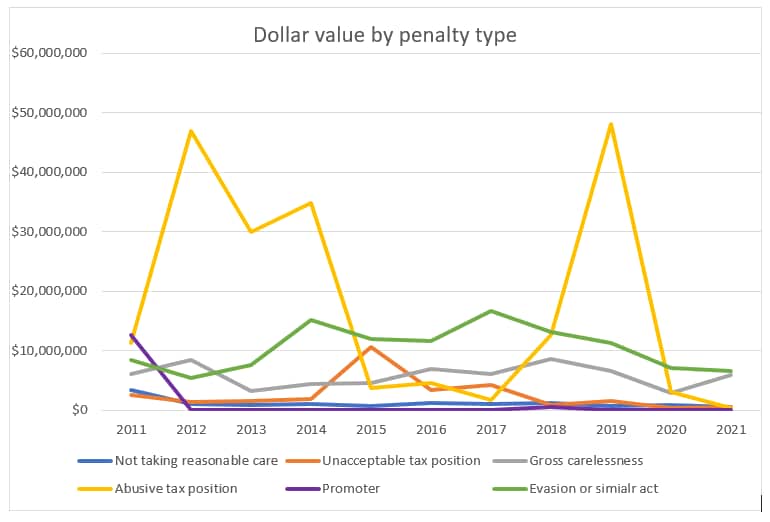 There are some clear trends in the graphics over the past eleven years. The imposition of shortfall penalties has seen a steady decline. The reduction in staff and reallocation of duties with Inland Revenue because of the Business Transformation project could be a factor. In the last two years, COVID-19 could also be a factor with resources diverted to other priorities and taxpayers being given some breathing space from audit action.

There is possibly some credence in the argument that Business Transformation has resulted in enhanced collection and matching of data which allows earlier identification of errors or discrepancies which can be fixed without active reviews, investigations or audits.

A number of significant and complex tax regimes have been enacted in recent times, including the BEPS regime (which incorporates anti-hybrid rules, restricted transfer pricing rules and tougher thin capitalisation rules). Time bar for transfer pricing related matters has also been extended and tax rules in relation to land transactions have also become more complicated. At some stage as pressures grow to increase government revenue, Inland Revenue are likely to need to increase audit activity to ascertain compliance with these tax regimes. This could result in additional tax and shortfall penalties to pay.

This is also a timely reminder that taxpayers can use the voluntary disclosure regime to reduce their exposure to penalties and undertake regular reviews of their tax functions and processes to ensure compliance.

For advice on mitigating Inland Revenue penalties, what to do when faced with the imposition of shortfall penalties, or any general tax dispute queries, please contact your usual Deloitte tax advisor.

In a continually evolving and ever more challenging New Zealand tax landscape, I am passionate about my role as a Tax Director and leading the Deloitte Tax Disputes & Rulings Centre of Excellence. I g... More