A brief introduction to the loan portfolio market today

Over the last three years, nearly a third of loan portfolios by volume have involved those specifically backed by commercial or residential real estate assets. For the vendors, the certainty of a lump capital sum can trump potentially less secure future cash flows, even where the magnitude of future cash flows has the potential to exceed the “cash-in-hand” sum. Add in the much enhanced regulatory and capital adequacy requirements, for commercial real estate lending in particular, and the arguments for trading out of a legacy loan book often become compelling.

In a simple world, two components are key to understanding the dynamics of an otherwise complex loan portfolio transaction: a) the quality of the future cash flows to be received from borrower repayments; and b) the quality of the assets to which the loans are secured. The latter is of particular importance where non-performing real estate lending is involved, with buyers often actively intent on taking direct control, where possible, of the underlying assets.

When multiple loans are bundled together, it is common for the value of the portfolio to differ to the sum of its parts. In the years immediately following the financial crisis, discounts to the value of future cash flows or assets were commonplace, due to a perceived high risk of borrower default and uncertainty regarding underlying asset values. Countering this, the ability to acquire a large portfolio of loans in a single transaction is an attractive proposition as the repeat transaction costs associated with multiple fragmented transactions can be avoided.

Market dynamics in Europe and beyond

Deloitte publishes “Deleveraging Europe”, an overview of the European loan portfolio market, twice a year (search Deleveraging Europe for further information). This publication outlines expectations on how loan sale transactions may evolve over the coming year and provides viewpoints from market players.

A total of €42 billion of loan portfolio deals were completed in Europe during the first half of 2017, compared to €45 billion during the same period in 2016, with a further €87 billion of deals ongoing. 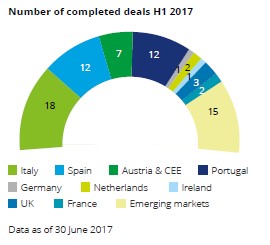 The UK has traditionally been a significant market for loan sales and was the only market in Europe which saw more activity in the first half of 2017 compared to 2016, albeit the €20.2 billion of transactions in H1 were mainly accounted for by a single residential mortgage portfolio sale from the on-going wind-down of UKAR.

So, why has there been a relative slow-down in transactions? One element that has tempered the pace of deals in 2017 has been the heavy regulatory load on potential NPL sellers, who have traditionally driven the loan portfolio markets. This includes new guidelines on NPL recognition and disposal strategy, the forthcoming adoption of a new accounting standard (IFRS 9) and the European Banking Authority’s 2017 Transparency Exercise.

And what for the future? Deloitte predicts that Italy will be the busiest market in Europe in 2017 for the second year running as the legacy of non-performing loans in its banking system is tackled. New European markets that have not seen much activity in the recent past are anticipated to emerge, especially Portugal and Greece, where momentum for significant deleveraging is building.

We started this piece by asking ourselves if “trading loan portfolios multiplies the chances of trouble, akin to a multi-£bn game of ‘pass the parcel”? Provided appropriate due diligence is completed on both the buy and sell sides of the transaction, risks will be identified, understood and quantified. As such, we believe loan portfolio sales will continue to have an important role to play in balancing risk and exposure throughout the financial system.

The European Banking Authority estimated in its last Eurozone transparency exercise that just over €1 trillion of NPLs remain on banks’ books in the Eurozone; we estimate that when non-eurozone and non-core assets are included in total there is around €2 trillion in European loans that could come to the market. This is despite the many years of deleveraging we have seen to date. There will be busy years ahead.

Nigel leads Deloitte’s Real Assets Advisory business in Financial Advisory, a team which brings together nearly 250 practitioners from a diverse range of backgrounds to address the most complex real estate and infrastructure-related business challenges. After an initial career in construction and development as a chartered quantity surveyor, Nigel has spent over 25 years leading assignments related to capital programme management, project governance and assurance, property and construction due diligence and corporate recovery.

Jeremy Castle
Sadiq Khan has published the final version of his affordable housing and viability supplementary planning guidance (SPG). This was consulted on earlier in the year.

Game of loans | Deloitte UK has been saved

Game of loans | Deloitte UK has been removed