Indonesia’s economy grew in the first quarter despite a decline in exports. The country’s outlook was aided by a credit rating upgrade, based on solid marks for its overall fundamentals.

In April, Moody’s upgraded Indonesia’s sovereign credit rating to Baa2 from its lowest investment grade rating (Baa3).1 The upgrade by Moody’s, commending Indonesian authorities’ deft management to improve macroeconomic stability, came on the heels of another similar upgrade by Fitch in December 2017.2 These rating upgrades could not have come at a better time for Indonesia. There are some fears that the United States Federal Reserve’s (Fed) rate hike path could reduce interest rate differentials with emerging economies, potentially leading to higher capital outflows from these economies.3 This, in turn, is likely to put pressure on emerging economies’ currencies and push up their borrowing costs. The two rating upgrades, therefore, likely reassure global investors about Indonesia’s economic fundamentals. It’s not a surprise then that 10-year bond yields in Indonesia have fallen by more than 100 basis points (bps) since the beginning of the year; low policy rates have also helped.4 This will likely keep borrowing costs in check, aiding investments and fiscal health.

Growth was healthy in Q1 despite slowing exports

The economy expanded by 5.1 percent year over year in Q1 2018, marginally lower than the 5.2 percent rise in Q4 2017.5 Private consumption and investments were the two key contributors to economic activity during the quarter (see figure 1). Growth could have been higher, had it not been for a decline in exports growth. Exports grew by 6.2 percent in Q1, continuing to lose steam post the strong 17.0 percent rise in the third quarter of 2017. The dip in exports growth was primarily due to a decline in oil and gas exports (-6.4 percent). An uptick in imports did not help as well. On a positive note though, imports growth has been mostly due to higher capital goods imports, an indicator of growing (foreign) investments. For example, the value (in US dollars) of imports of capital goods grew by 27.8 percent in Q1, followed by a 40.8 percent rise in April. That augurs well for the economy in the medium to long run. Taking heart from the rise in investments

A major positive for the economy over the past few quarters has been the uptick in investments. Gross fixed capital formation grew by 7.9 percent in Q1, the fastest pace of expansion since Q4 2012. Part of this rise is due to steady economic growth, while the government’s focus on improving infrastructure and luring foreign investors has also helped. Foreign direct investment (FDI), in US dollar terms, went up by 11.5 percent year over year in Q1, continuing from an 11.3 percent rise in 2017.

It is worth noting that the national accounts data on investments indicates a recovery in machinery and equipment since the second half of 2017. In Q1 2018, spending on machinery and equipment went up by 23.7 percent, continuing the momentum from Q4 2017. The pace of investments in buildings, however, fell marginally in Q1 (see figure 2). With the government not likely to tone down its impetus on infrastructure spending, despite hiccups in funding via public–private partnerships and implementation, investments within the economy is likely to continue expanding at a healthy pace. 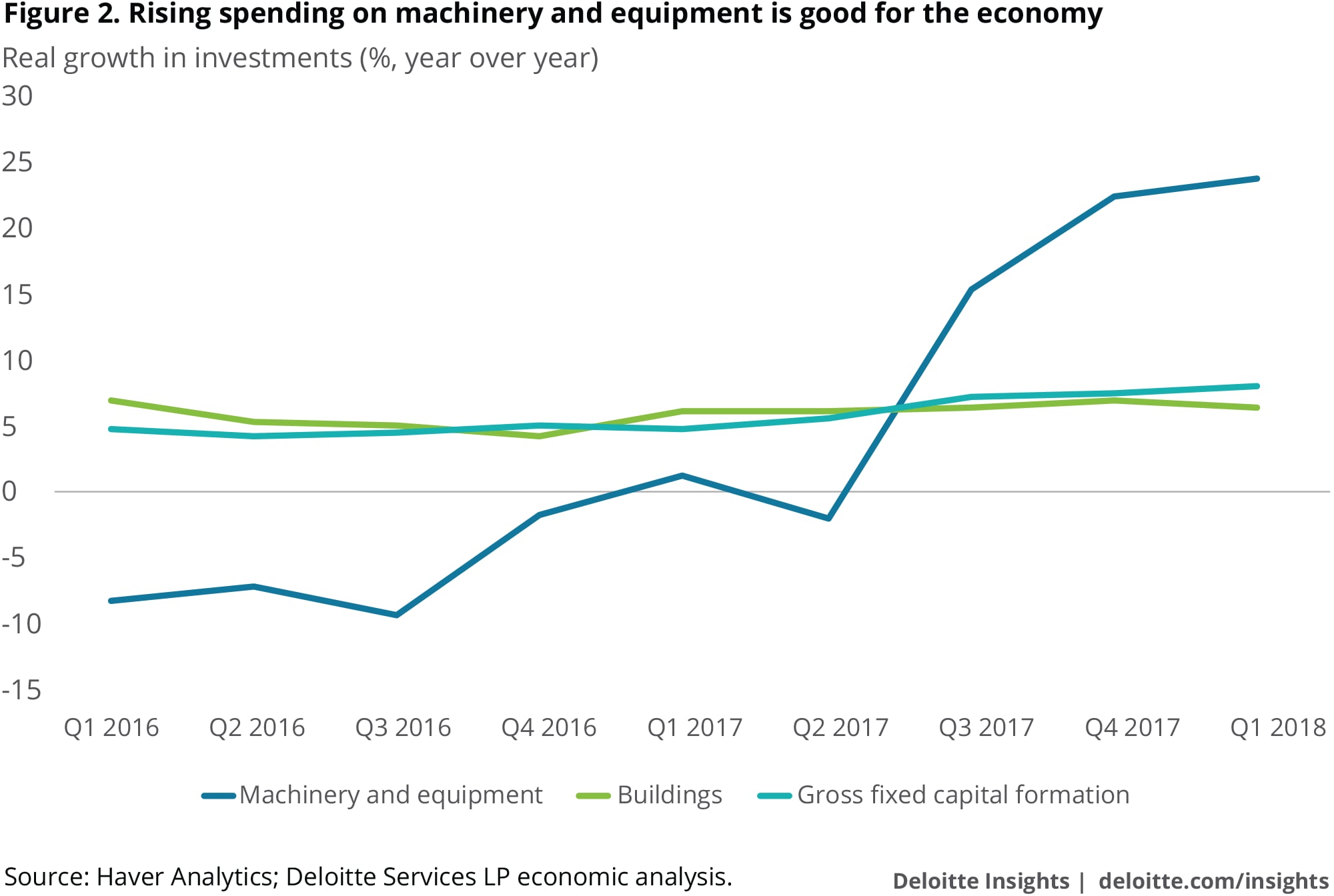 Private consumption, a key driver of economic activity, grew by 5.0 percent in Q1, almost the same pace as the previous quarter. The pace of expansion in consumer spending is, however, still below the near 5.5 percent expansion witnessed in certain quarters during 2012–2013. For now, consumers are likely benefitting from declining price pressures, which have been on a broad downward trend since mid-2017. In April, headline inflation was 3.4 percent, slightly up from 3.3 percent in the beginning of the year, but still within Bank Indonesia’s (BI’s) 2.5–4.5 percent target range.

An improving labor market has also helped consumers. For example, the unemployment rate (non-seasonally adjusted) fell to 5.0 percent in Q1 from 5.5 percent in Q3 2017 (the last available data point for comparison). As a result, consumer confidence remains elevated,6 which is likely to keep consumer spending healthy; recent retail sales data points to that. Sales volumes went up by 3.4 percent year over year in April, continuing an uptick in momentum since February. Lower interest rates have also likely aided consumers as can be seen from the rise in consumer credit (see figure 3). Nevertheless, consumers are likely to remain cautious in the year before the elections in 2019. 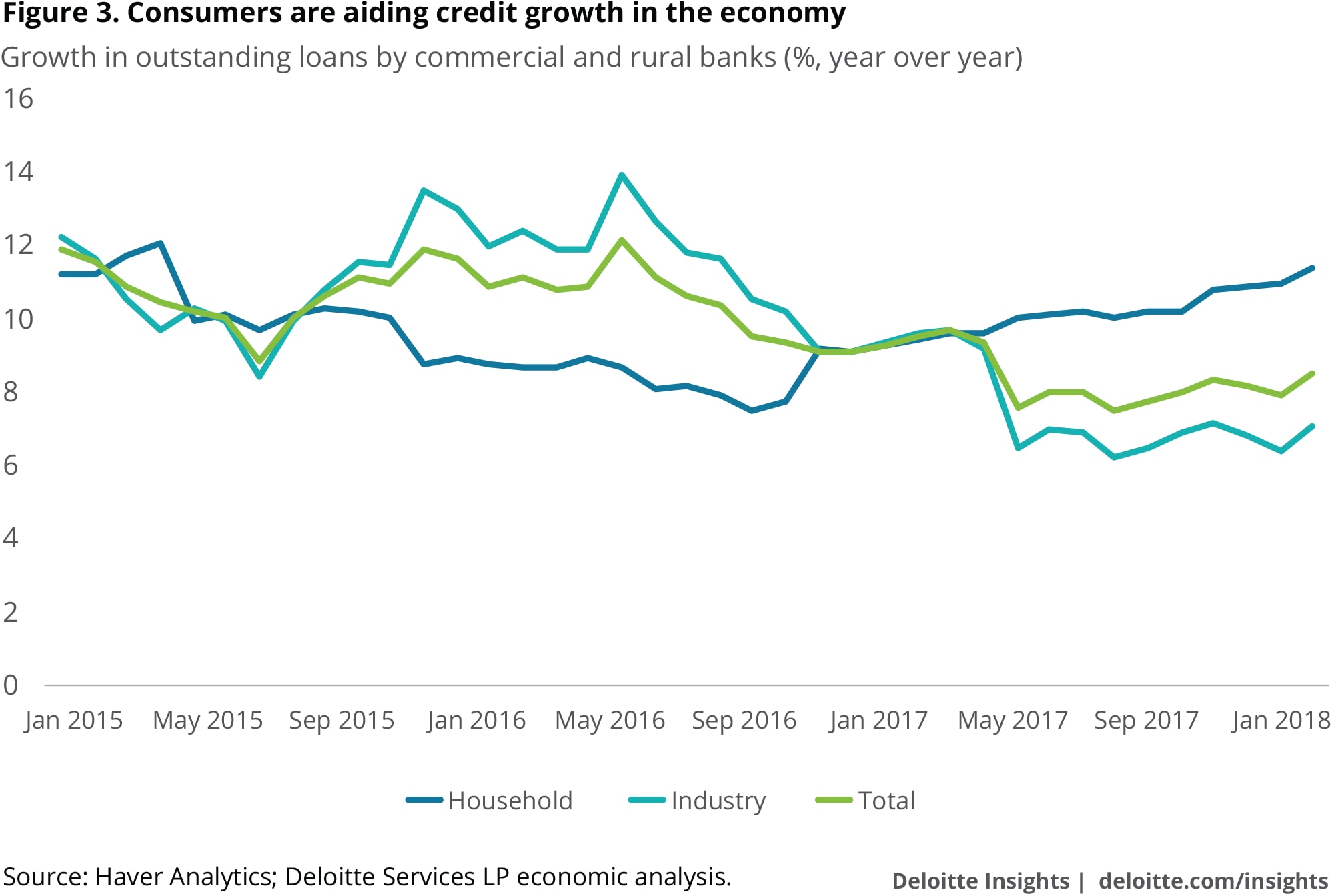 BI will likely be wary about currency movements

Prices of foodstuff was the key contributor to inflation in April. Will higher global oil prices add to this? Not likely. The government has kept a lid on administered prices, which includes fuel (see figure 4). This is a move away from initial reforms enacted by the government, whose effort at that time was to cut the large subsidy bill and reform public finances.7 The government’s current stance is not likely to change before elections in 2019. This will likely keep a check on inflation, which has been below the central bank’s upper limit of 4.5 percent since November 2015, and, thereby, enable BI to continue its easy monetary stance to aid economic growth. The central bank, however, has a different worry—the exchange rate. By the end of April, the rupiah had fallen against the US dollar by about 3.1 percent since 2017, edging downward with other Asian emerging markets such as the Philippines and India, as the Fed raised rates in the United States. BI’s response has been to support the rupiah by using its reserves. From a record-high level of $132.0 billion in January, foreign reserves fell by 5.4 percent by April. 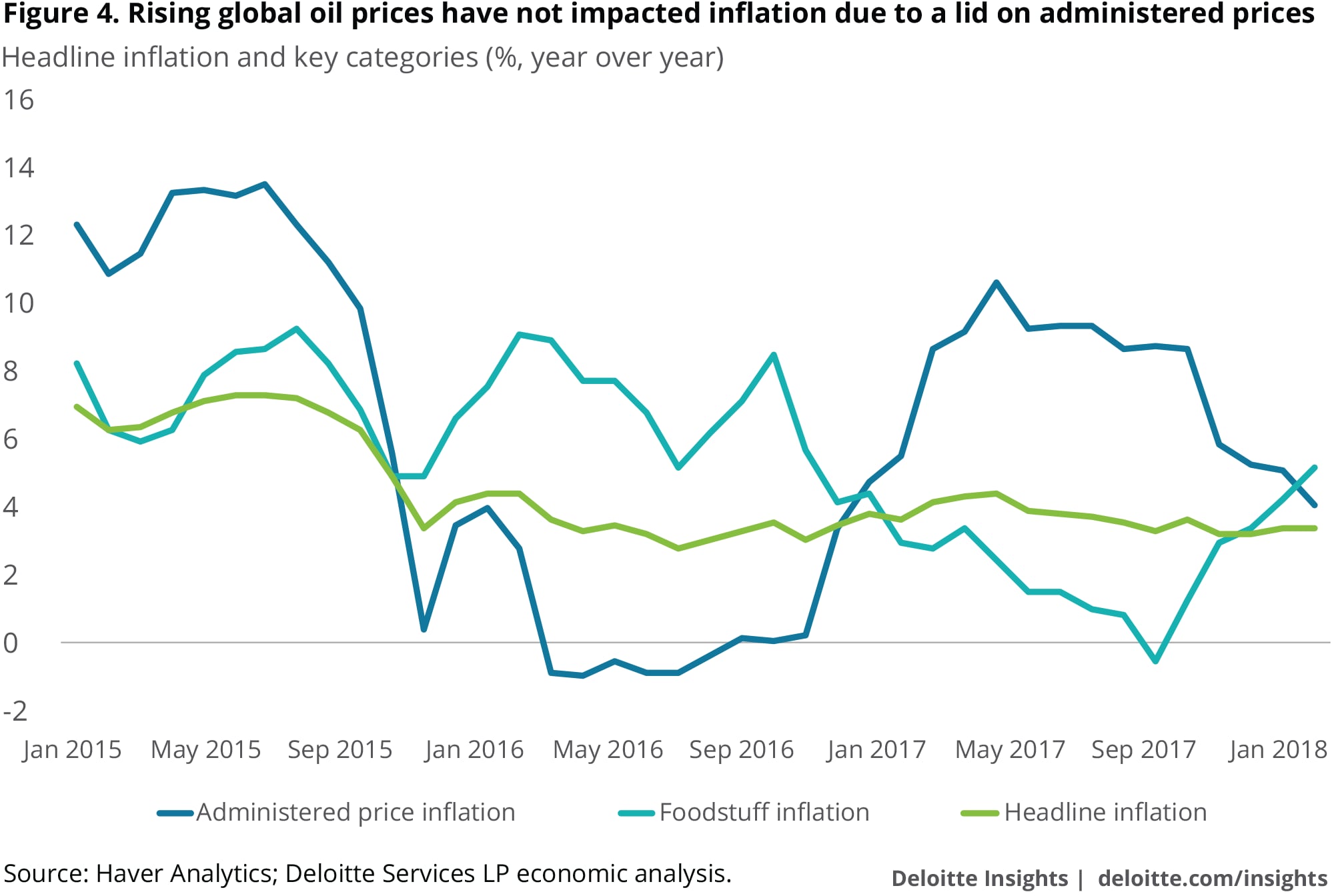 It will likely be difficult to meet the fiscal deficit target

Unlike inflation, Indonesia’s external balances are likely to take a hit because of the rise in global oil prices. The country, despite its hydrocarbon resources, is a net importer of oil and gas. Oil and gas imports grew 29.6 percent in 2017—Brent prices had gone up by 17.3 percent that year—a stark contrast to a 22.7 percent decline in 2016. Although Brent prices have gone up by about 17.5 percent so far this year, growth in oil and gas imports has been rather muted (just 6.0 percent in Q1). This is likely to change if oil prices continue to rise. Brent, for example, has increased 12.9 percent between the end of March and May 15. This, in turn, could dent the current account, which was at a deficit of 2.1 percent of GDP in Q1. The rise in oil prices will likely have another impact—the government’s subsidy bill, given that it has decided to keep a lid on administered prices. This, in addition to pre-election spending and a continued policy focus on infrastructure, will likely ensure that the government misses its fiscal deficit target of 2.2 percent of GDP. Nevertheless, the rule of not letting the deficit breach 3.0 percent and hard-earned ratings upgrades will likely prompt the government to keep a check on public finances.

Indonesia: Economy off to a healthy start this year has been saved

Indonesia: Economy off to a healthy start this year has been removed

An Article Titled Indonesia: Economy off to a healthy start this year already exists in Saved items