Just 20% of high street shops affected by 27 high profile administrations since 2009 are still vacant, according to new research from Deloitte, the business advisory firm.

Using Local Data Company (LDC) data on nearly 5,900 shops, Deloitte’s analysis shows that the high street is far outperforming retail parks and shopping centres, which have respective vacancy rates of 37% and 29% for space formerly occupied by these retailers.

Discount stores account for nearly one in five of all re-lettings of shops vacated as a result of administrations in the study. Indeed, the shops acquired by discounters as a result of these administrations account for nearly 50% of the expansion in this sector since 2008.  Convenience stores have also expanded strongly, accounting for nearly 12% of space acquired post-administration. This pattern suggests a change in shopping habits inspired by the recession and mobile commerce, as the major supermarkets move the battleground in their “race for space” to the high street.

Ian Geddes, head of retail at Deloitte, said: “Historically, retailers have talked about “destination” shopping locations. However, different and more cautious consumer spending patterns have joined forces with a technology-powered convenience culture which demands that goods and services are available as and where the consumer demands.

“Rather than taking shoppers away, the internet is pushing people back to shops with the growth of “click and collect”. The evidence suggests that we may be entering a new era of “en route” shopping, powered by mobile shopping and the demand for collection points strategically located at a point between where the consumer is travelling from and to.”

However, charity shops, pawnbrokers and bookmakers showed limited interest in acquiring the shops in the study. According to the data, just 3% of shops post-administration have been occupied by charity shops and less than 0.01% have been turned into pawnbrokers or bookmakers.

Ian Geddes commented: “It is likely that the rate of expansion by bookmakers may not be as aggressive as widely believed, with new openings often offset by closures. The growth in online and mobile gambling would appear to make any substantial long term growth in overall betting shop numbers unlikely.”

Shops (all types) in some regions have fared better than others, with Greater London (18% vacancy rate) and Scotland (37% vacancy rate) at opposite ends of the scale. However, across the UK the high street consistently outperforms retail parks and shopping centres.

Hugo Clark, director at Deloitte and author of the report, concluded:  “The results of this research are surprising and seem to challenge a number of myths around the state of the high street. They would suggest that far from being dead, the high street appears to be showing great resilience and a capacity for reinvention. It seems that a structural shift is taking place with the high street emerging as an unexpected winner.”

Shops (all types) by region 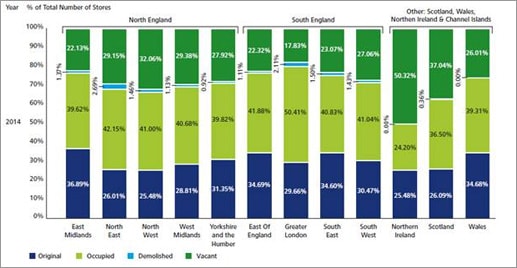